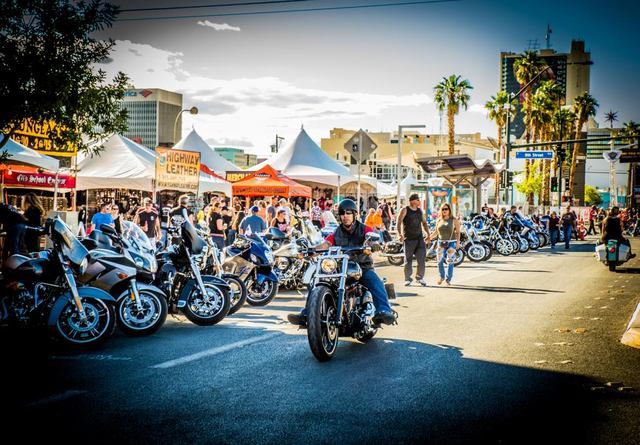 COURTESY The Las Vegas BikeFest will be held Sept. 29 through Oct. 2.

The Las Vegas BikeFest roars into Sin City once a year, giving motorcycle enthusiasts, and the people who love them, a great reason to put on their leathers and ride to Fremont Street East.

The two-square-block area bordered by eighth and 10th streets and Ogden and Carson avenues in downtown Las Vegas will serve as rally central for this year’s event. Free bike parking for attendees will be available in a spacious lot at the corner of Ogden Avene and 10th Street.

Based on the popularity of the event in past years, coordinators of this year’s event have expanded the schedule and added new activities to lure past attendees back for more.

“We wanted to keep the party going at rally central so we extended our hours,” said Candice Cooley, marketing manager for Las Vegas-based ConvExx, the event’s producer. “The rally central party will be held Thursday, Friday and Saturday until 10 p.m., and one lucky attendee will win a brand new motorcycle”

New for this year is the inaugural induction ceremony into the Las Vegas Motorcycle Hall of Fame, reserved for iconic figures in motorcycle culture who left a unique mark on Sin City. The 2016 inaugural class consists of actor Lorenzo Lamas; bikernet.com founder Keith Ball; and motorcycle stuntmen Robbie Knievel and the late Evel Knievel.

The Las Vegas Motorcycle Hall of Fame is a joint project between the Las Vegas BikeFest and stuntman, singer and actor Branscombe Richmond, who plays Puna on the hit Showtime series “Roadies.”

Another new feature is Adventure Land, a special area sponsored by Great Southwest Moto Adventures and devoted exclusively to adventure riding, an activity that is rapidly growing in popularity among riders. Guests can interact with experts while checking out the latest bikes, parts and accessories.

Back for the 13th year is the prestigious Artistry in Iron, Master Builders Championship. This invitation-only bike building contest welcomes only the best and the brightest in the business.

“Each year we invite those builders who are on the cutting edge,” says Mindi Cherry, vice president and event manager. “There are no rules or guidelines. These builders never cease to amaze us, and it’s always exciting to see the incredible works of art that roll in every year.”

Additional activities include 30 bands performing on two stages throughout the event, four bike shows, the Miss Las Vegas BikeFest pageant, Biker Games, Poker Runs and contests awarding prizes for the best facial hair, best tattoo and best bikini. If you’re in the market for a new ride, Victory and Indian Motorcycles will be on hand offering free demo rides.

By the way, you don’t have to be a hardcore biker to attend the Las Vegas BikeFest. This is the perfect event for anyone who wants to experience full immersion into the biker culture. People travel from throughout the United States and beyond to take part in the action, with the vast majority coming from out of state. More than 400,000 attendees have attended BikeFest over the past 15 years.

“Eighty percent of our attendees are from out of Nevada, and we get attendees from about 15 different countries,” Cooley says. “We get a variety of riders from lifetime motorcycle club members to people who aren’t even riders but love the atmosphere of a bike rally and checking out the beautiful works of art.”

The Las Vegas BikeFest has drawn more than 400,000 people since its debut in 2001 and organizers expect an attendance of more than 30,000 for this year’s Rally weekend.

For more information about this year’s schedule and to register for the event, visit lasvegasbikefest.com or call 866-bikefest.

MOST READ
1
6-figure table game jackpots hit on, off the Strip

5
Report: Tony Hsieh may have been impaired at time of deadly fire