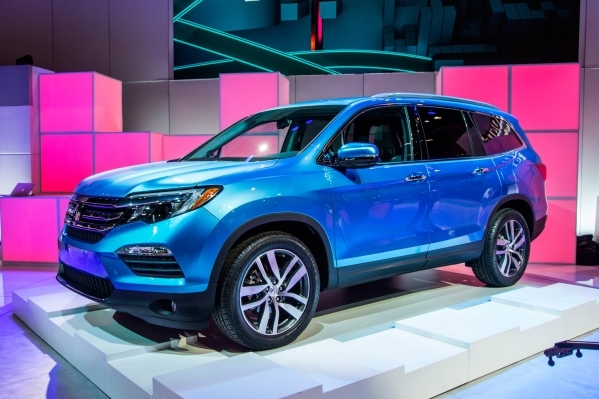 If looks could kill, the restyled for 2016 Honda Pilot would be a death-row thriller.

Its looks are entirely new, leaning more toward the CR-V and Odyssey with lots of curves. This new Pilot is modern and sleek and manages to turn heads, and Honda West General Manager Kevin Bushey says the customer reaction at his dealership has been “killer.” But what’s really murder for Bushey is getting enough new Pilots in to replace those flying off the lot. (“We can sell every one we get.”)

“They (customers) all love the body style,” Bushey said. “People who have purchased one just rave about it. They come in for an oil change and we ask them how they like the new Pilot and they say love it. It’s just phenomenal and one of the more exciting Honda products to come out. The new body can go for anybody — sylish and also for the mom with the kids. It’s a very attractive car.”

That exterior is nearly shown up by how good it looks on the inside. The prior Pilot, even in its most luxe trim, did not feel like a luxury car. The new Pilot takes some cues from its Acura siblings and boasts a stellar interior that assures every member of the family will be comfortable and entertained.

There is seating for up to eight passengers with the AWD Elite we tested, featuring seating for seven with second-row captain’s chairs. This makes getting to the now roomier third row easier and actually possible for more nimble adults. There’s enough head and legroom for adults, and there are even cup holders that are also illuminated in the first two rows.

“It’s just been phenomenal,” Bushey said. “Along with the restyling, the technology and convenience are making it so well-received. It’s such a gorgeous body style. The lines are just beautiful.”

Bushey said inside the Pilot is the convenience of the Odyssey and everything is push button. He said owners can now reach a strap from outside the vehicle that lowers the farthest rear seat for cargo or whatever. For passengers in the back, a simple push of a button will do the trick.

The infotainment system features an 8-inch touchscreen which looks great until you touch the screen. It’s very shiny, which means even the cleanest of fingers leave smears. If the sun hits that finger-smeared screen, it’s even worse and you can’t see the display at all. A small gripe, but one that proved frustrating to driver and passengers.

Infotainment includes AM/FM/CD/HD with a 10-speaker audio system and a 9-inch rear Blu-Ray/DVD player with remote. It can be controlled from up front, or the kids can fight over the remote and control things from the back. It’s easy to use with a sturdy flip-down screen.

The 2016 Pilot is powered by a 3.5-liter V-6 engine with 280 horsepower paired to a 9-speed automatic transmission. There are also paddle shifters for those who want a little more control over their ride. The transmission was generally smooth, but occasionally it felt as though it was hanging on when it tried to decide on the next gear. There were also a few surges when it shifted too far down for a lower gear.

The ride is about as smooth as you’ll find in a mid-size SUV. This is a large vehicle, but it manages to keep from feeling truck-like with relaxed steering and good cornering. Bumps and dips in the road are smoothed out, giving even those in the third row a smooth ride. It was composed and controlled even with abrupt maneuvers at highway speeds.

There are drive modes of normal, snow, mud and sand, which the driver can choose depending on road conditions. Combined with AWD and 7.3 inches of ground clearance, the cold-weather months will be a lot easier to manage in this. It also has good fuel economy of 19/26/22 mpg city/highway/combined.