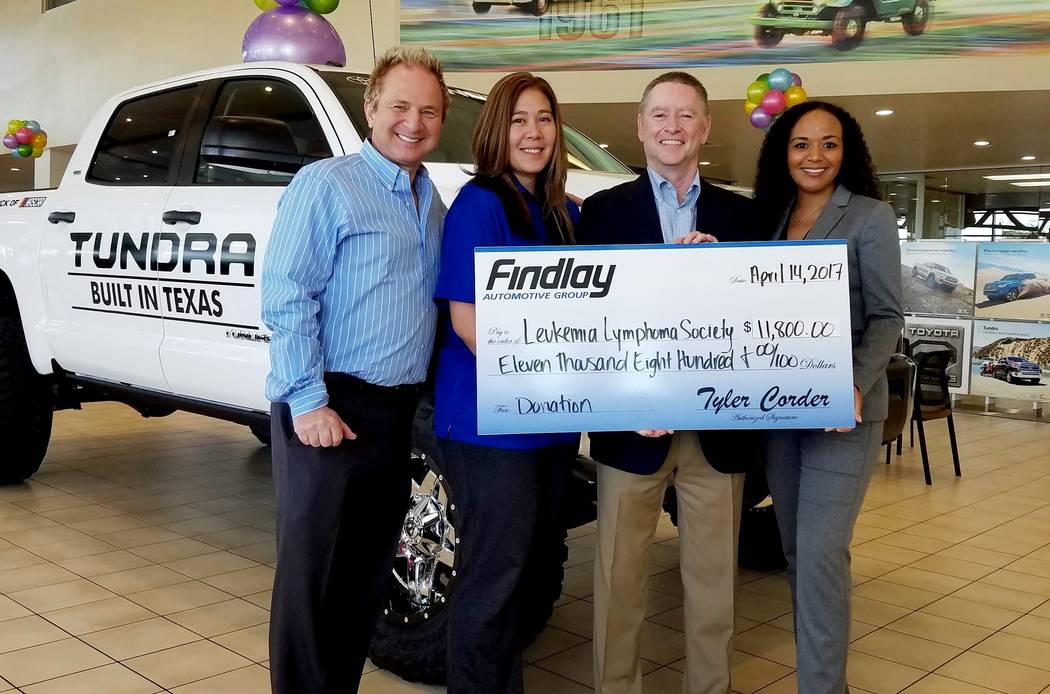 All the funds raised by the team at Findlay Toyota will be donated to the Leukemia & Lymphoma Society of Southern Nevada. The organization’s mission is to cure leukemia, lymphoma, Hodgkin’s disease and myeloma and to improve the quality of life of patients and their families.

Barr, the energetic Englishman and former soccer player, announced that he was competing for Man of the Year in February.

Findlay Automotive Group offered Barr some assistance in meeting his goal when company Chief Financial Officer Tyler Corder delivered a check for $11,800 to bolster the pot and help continue the rapid rise in funds for the Leukemia & Lymphoma Society.

Barr and dealership marketing manager Stephanie Bernas have combined to form an ideal team, as Bernas lines up the promotional appearances and Barr follows through appearing at a long list of gatherings that all lead to more donations.

Having Bernas on board has been a giant benefit for the team at Findlay Toyota.

“Stephanie is our heart and soul,” Barr said. “She is working relentlessly to help me attain my goal.”

One of the upcoming special events is called “Come Dunk John,” in which Barr will once again demonstrate his willingness to do anything. The event is exactly what it sounds like — John Barr in a dunk tank. “Come Dunk John” will be at Findlay Toyota from 10 a.m. to 6 p.m. April 29. The cost will be $10 for one ball and $20 for three balls.

Bernas said the event will be broadcast live by local radio stations.

Another way to contribute is at Mick & Eileen Stout’s fifth annual golf tournament, which will take place at 1 p.m. May 1 at Siena Golf Club. The cost is $200 per person. Hole sponsorships are available for $800.

The Leukemia & Lymphoma Society Man and Women of the Year will be announced at the gala on Saturday, May 13 at the JW Marriott. Sponsorships for the gala are still available: the Silver for $3,000, the Gold for $5,000, the Platinum for $10,000 and the Diamond for $15,000. Additional donations of any dollar amount will be accepted either at Findlay Toyota or on Barr’s website, http://bit.ly/2oSMWjU.

Situated at 7733 East Gate Road in the Valley Automall in Henderson, Findlay Toyota is part of Findlay Automotive Group, founded in 1961 by the late Pete Findlay, whose son, Cliff, now oversees 28 automobile dealerships in Nevada, Arizona, Utah, Oregon and Idaho.