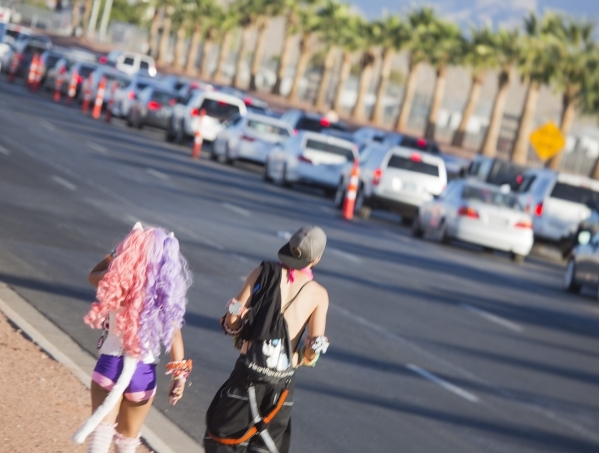 “It is always about transportation,” said Las Vegas Mayor Carolyn Goodman during a monthly meeting of the Southern Nevada Tourism Infrastructure Committee on the campus of the University of Nevada, Las Vegas last month.

The committee was formed by Gov. Brian Sandoval in July to study how the state’s tourism industry can continue to expand while minimizing any speed bumps along the way that might constrain continued growth.

Steve Hill from the Governor’s Office of Economic Development is the chairman of the tourism infrastructure committee, assisted by UNLV President Len Jessup as vice chairman.

The sheer numbers that drive Southern Nevada’s tourism industry are impressive. There are 150,000 rooms that need to be filled every day. Attractions, events, gaming, shopping, dining and other amenities draw about 43 million visitors each year to Southern Nevada from around the world, as well as from nearby states.

Pat Christenson of Las Vegas Events, a subsidiary of the Las Vegas Convention and Visitors Authority, presented a historical summary of the growth of large-scale entertainment centers that have housed multiple entertainment extravaganzas, from the first Las Vegas Rotunda, built in 1959 on the site of today’s Las Vegas Convention Center to the Thomas and Mack Center on the UNLV campus. Then there’s the Cashman Center, Sam Boyd Stadium, MGM Grand Garden Arena, the Colosseum at Caesars Palace, The Orleans Arena, the new MGM Resort Festival Grounds and now a new stadium built by MGM Resorts and AEG.

Each new venue has opened up more potential event spaces for larger numbers of visitors, but the convention authority still feels the area is underserved and missing out on even larger scale events each year, by not having built a stadium facility immense enough to serve national sports teams.

McCarran International Airport is the hub that allows Southern Nevada to be an international entertainment destination. Its daily flights are supplemented by the North Las Vegas airport and the Henderson Executive Airport for private jets.

Rosemary Vassiliadis is the director of aviation for Clark County. She emphasized that a visitor’s experience at McCarran needs to not only be smooth and efficient, but also welcoming and friendly. The airport hosts all the domestic airlines originating in the U.S., as well as 16 international carriers, bringing almost 43 million travelers to Southern Nevada in 2014. This volume of traffic ranks McCarran as the ninth-busiest airport in the country and 25th busiest in the world.

With the growth of aviation resources and destination event venues, the challenge of moving visitors between the airport and local resorts has always pushed local transportation resources to the limit.

At this time, 3,000 taxicabs, as well as hotel shuttles and limousine services, supplement the RTC’s public bus system to move visitors between the airport and local resorts. The Taxicab Authority Board estimates that its industry conducted 27 million trips in Las Vegas during 2014, with 90 percent of the trip destinations within an 8-mile radius between the airport and the Las Vegas Strip.

Scaling up these resources for large conventions is always a challenge. There are plenty of cabs queued up to pick up visitors after they step off the planes, but once the cabs get on the road during peak travel times, there can be gridlock, especially during the hours when resort employees’ shifts are changing.

The addition of Uber and Lyft rideshare services this year can help supplement public transportation to other parts of the region not served by public transit, taxis, shuttles and limousine services, while also creating economic opportunities for local residents. However, these rideshare services are presently prohibited from participating in airport traffic because of concerns about increased congestion on routes already jammed by private cars and existing transportation services along the resort corridor.

A labyrinth of parking structures must also accommodate out-of-town drivers and their vehicles arriving from nearby states, as well as local employees commuting to work every day.

Light rail is being considered for moving tourist traffic and Strip employee commuters in the future, but a steep price tag that ranges from $75 million a mile to $750 million a mile, (depending on whether the system runs above or below ground) could be an obstacle.

One unique form of transportation suggested involves the use of helicopters that can land on helipads built above the rooftops of resort buildings. Heliports and helipads have been used in Los Angeles and New York for decades, while also providing an added capability for rooftop evacuation and emergency airlifts. At one time, Los Angeles skyscrapers were required to include a helipad as part of their design on any structure exceeding 75 feet tall.

Maverick Helicopters was founded in 1996 by former Vietnam veteran pilot Greg Rochna and his wife, Brenda. They have been conducting helicopter tours from the Las Vegas Strip since 2001 and now maintain a fleet of 47 aircraft.

At present, only the Excalibur has a rooftop helipad, but it has not yet been optimized for public transportation. Maverick has transported guests through Las Vegas airspace to golf courses and poolside venues where large landing areas are available. The Las Vegas Motor Speedway also allows onsite helicopter landings during NASCAR and Electric Daisy Carnival events.

For more information about the Southern Nevada Tourism Infrastructure Committee, visit the website at www.sntic.org