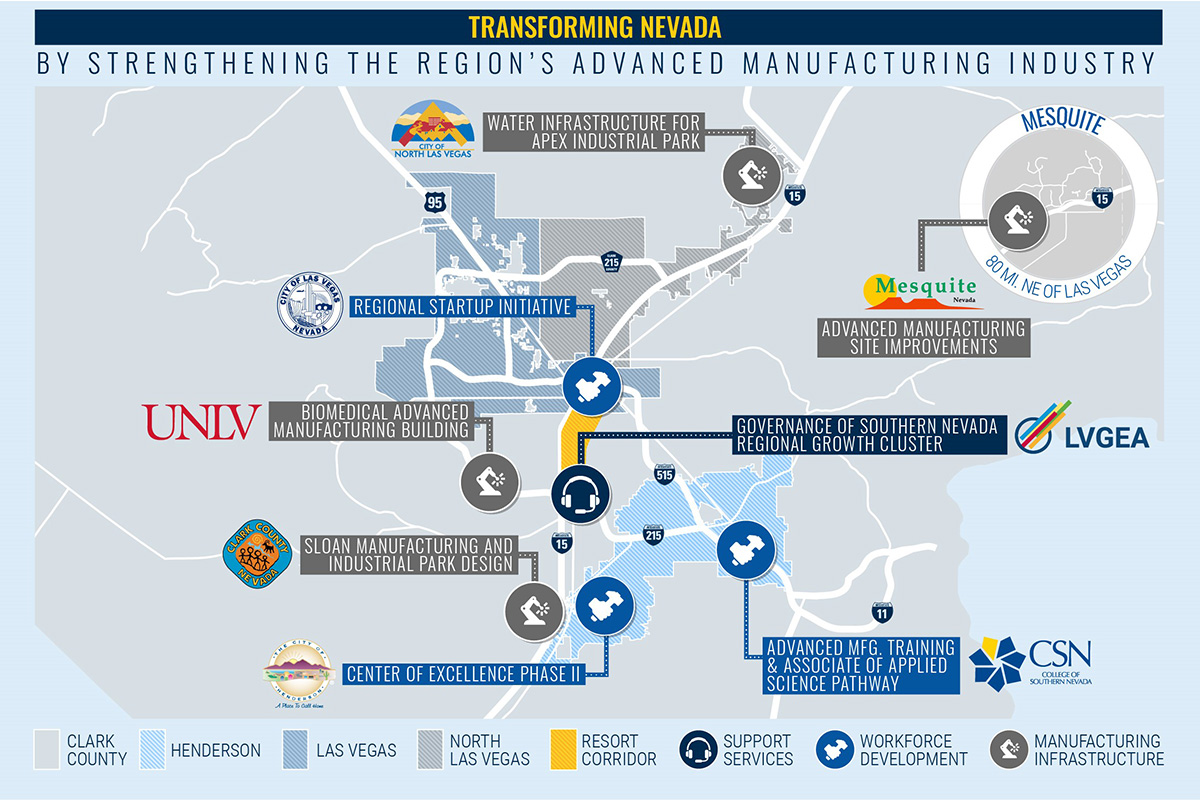 As our nation has continued to recover from the COVID-19 pandemic, a new theme has emerged. The aim is not to simply achieve the steady-state experienced pre-pandemic but to instead build back better – a challenge the Southern Nevada community has taken to heart. Over the last year, representatives from every municipality and leaders from prominent organizations and universities, including the University of Nevada, Las Vegas (UNLV) and the College of Southern Nevada (CSN), have come together to form historic partnerships Southern Nevada has never before seen. The resulting impacts of these collaborations will propel the region forward, stimulate future growth and strengthen the state’s infrastructure for years to come.

The Build Back Better Regional Challenge (BBBRC), hosted by the U.S. Economic Development Administration (EDA), was one of several grant opportunities funded through the $1.9 trillion American Rescue Plan economic stimulus bill. The EDA received funding to assist communities in rebuilding through transformative initiatives that would accelerate economic recovery and offer increased resiliency against future downturns. The Southern Nevada Regional Growth Cluster (SNRGC), led by the Las Vegas Global Economic Alliance (LVGEA), is one of 60 national finalists striving to capture tens of millions of dollars for their region.

The SNRGC applied for funding to launch eight individual but integrated initiatives to establish the community as an advanced manufacturing hub. Specifically, the projects focus on a number of critical proposals: the development of workforce training programs and teaching facilities by CSN and the city of Henderson; startup initiatives supporting new business formation by the city of Las Vegas; new manufacturing sites in Sloan and Mesquite by Clark County and the city of Mesquite; biomedical manufacturing facilities by UNLV; expanded water infrastructure, including a pipeline to Apex Industrial Park by the city of North Las Vegas; and coordination of these efforts by LVGEA. The buildout of the proposed advanced manufacturing ecosystem is expected to support tens of thousands of new, high-paying positions and billions of dollars of economic activity over the next decade. Perhaps most importantly, landing this grant funding and moving these investments forward would redefine Southern Nevada’s industrial positioning and diversify the local economy, preventing future economic downturns from crippling the region.

As part of the grant application management team, I had a front-row seat to the process, collaboration and work effort required. The steering committee, comprised of leaders from around the state, was the first group to come together in support of BBBRC, tackling the grueling task of selecting only eight projects (out of hundreds) to advance within the competition and assuring the coalition’s vision was met. Key players included community leaders Clark County Commissioner Marilyn Kirkpatrick, Betsy Fretwell, Michael Brown, Jaime Cruz, Irene Bustamante Adams and Bo Bernhard, to name a few. On the operations front, LVGEA Chief Operating Officer Jared Smith was tirelessly dedicated throughout the process, ensuring all parties worked together, solving challenges and promoting the application. Further, input from the Latin Chamber of Commerce, Asian Chamber of Commerce and Urban Chamber of Commerce, as well as 120 different stakeholders, resulted in an equity plan that will ensure the benefits of this grant and future opportunities are equitably distributed among marginalized communities.

Evidence of how far the region has come lies in the tough decisions and sacrifices made throughout the process while establishing priorities, selecting projects and meeting funding needs, particularly as the goal posts moved late in the game. Clark County Commissioner Justin Jones, Mesquite City Councilman George Gault and LVGEA President and CEO Tina Quigley refined the application’s final programming to move the economy, workforce and businesses forward. This regional challenge did not just bring the community together for an instant – it has created lasting bonds that will benefit the Silver State long-term. Further, the grant has resulted in a new governance structure dedicated to pursuing future federal opportunities in a similar fashion to the Build Back Better grant for the benefit of all Nevadans moving forward.

Overall, it was encouraging to see everyone working toward a common goal. It is not clear if the proposal will be selected from the 60 remaining applicants, but it is evident that a strong foundation has been established upon, which future progress will be built. In a time when divisiveness has become almost routine, Southern Nevada has proven that in addition to building the community back better, we as a community are better when we work together.