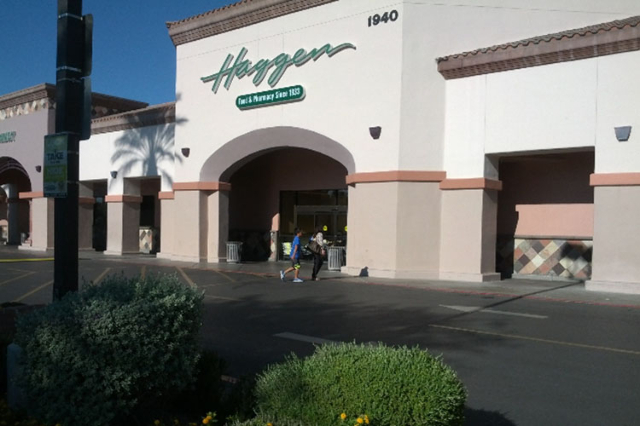 Albertsons will take over the closed Haggen​ store at 1940 Village Center Circle in Summerlin in March. (Las Vegas Review-Journal file)

In a deal announced to the center’s tenants on Friday, grocery chain Albertsons will take the space at 1940 Village Center Circle.

An opening date hasn’t been set, but a hearing for an alcohol sales license is set for Feb. 17, and the landlord and grocer have been “diligently working to be sure the store is open as soon as possible,” said Jim Christensen, managing member of California-based Investment Properties II, which developed Trails Village Center in a joint venture with Summerlin developer The Howard Hughes Corp. and continues to manage the plaza.

The announcement marks the end of a months-long odyssey that involved a national grocery merger, a new market player that expanded too much, a bankruptcy, and multiple feints from tenants that weren’t quite the right fit.

Albertsons will be the center’s third anchor store in nine months, following Vons and Haggen. At least three other chains said they wanted the 56,660-square-foot space.

Albertsons’ journey to Trails Village center began in January 2015, when the grocer and Vons parent Safeway completed their $9.2 billion, 2,230-store merger. To prevent too much market concentration in one operator’s hands, the Federal Trade Commission required the companies to sell 168 stores.

Haggen, a tiny chain of 18 stores in the Pacific Northwest, snapped up 146 of the stores for an undisclosed price. Haggen’s purchase included seven Southern Nevada stores, which the company converted to its nameplate in June.

But the acquisition proved too much for Haggen, which filed for bankruptcy in September. The company also sued Albertsons for $1 billion, alleging the grocery titan gave it bad information about pricing and inventories and lured away potential Haggen customers with sales promotions.

Albertsons said in late November that it would take back three of the stores, at 2910 Bicentennial Parkway, 575 College Drive and 190 N. Boulder Highway.

Sprouts claimed a fourth store at 7530 W. Lake Mead Blvd. It will share the space with Petco. Both stores are scheduled to open in the next seven to eight months.

Two Haggen stores — in Boulder City and at 820 S. Rampart Blvd. in Boca Park — still have no new tenants.

“It’s been very long, taxing and expensive journey. We spent millions of dollars doing what we did,” Christensen said.

In fact, Investment Properties II is the only landlord in the Haggen bankruptcy case that has been able to dictate what store took over its store, Christensen said.

Warehouse food and party-supplies discounter Smart & Final initially grabbed the space as part of a seven-store pickup in Nevada and California. The chain dropped the Trails Village Center store from its plans because leases there require a full-service grocer with a deli, bakery and floral department. Sprouts looked at the store, but didn’t make the cut for the same reason. Smith’s asked about the space as well, but it has another store less than three miles away, at Lake Mead and Rampart boulevards.

Investment Properties took control of the situation by bidding on and winning the Haggen lease. Buying back the agreement for $3 million gave the landlord the right to dictate who took over the store.

“In my mind, Albertsons deserves a big badge of credit,” Christensen said. “They had a moral conscience. They said, ‘There are people we need to serve.'”

Christensen said The Howard Hughes Corp. was also “actively involved” behind the scenes, even though the developer hasn’t managed the center since its 1998 opening.

“All of the (grocery) competition was engineered by The Howard Hughes Corp.,” he said. “It was designed to have a full gamut of places to shop. Even though they’ve sold out (Summerlin North) and moved on, they have an ongoing commitment to the community they have created. You don’t see that.”