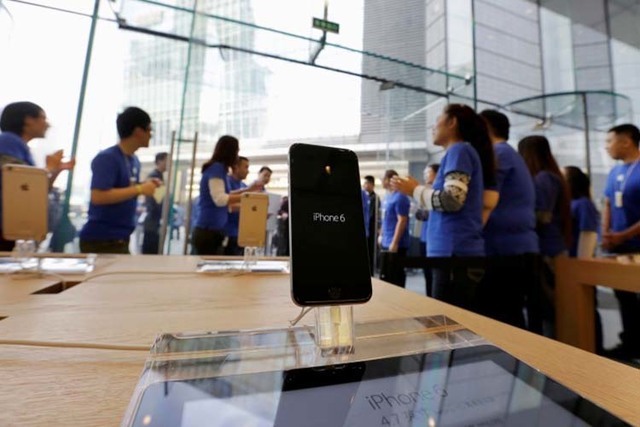 Sales staff welcome the customers to buy iPhone 6 and iPhone 6 Plus at an Apple store in Beijing, Oct. 17, 2014. (Jason Lee/Reuters)

Apple said Friday it has appealed the decision of a Beijing oversight panel alleging the tech giant violated design patents of a small Chinese competitor, but sales of Apple smartphones have not been disrupted by the dispute.

The ruling last month initially raised the possibility that sales of the latest iPhone models could be blocked in the Chinese capital, Beijing. But a statement from Apple said the issue was put on hold pending a court review.

All models of the iPhone 6 are “available for sale in China,” said the company statement.

A ban on iPhone sales would appear highly unlikely. Apple’s smartphones are enormously popular with China’s fast-growing middle class, and the Chinese government would be unlikely to risk the backlash that such a move could provoke.

But the dispute marked the latest complication for the company in its largest market outside the United States. China halted Apple’s book and movie services in April for allegedly violating foreign publishing regulations.

The issue also underscores the growing concerns that many foreign companies have about doing business in China, with many feeling the playing field in increasingly tipped against them.

In a decision last month – but only made public recently – Beijing’s Intellectual Property Office found that the iPhone 6 and iPhone 6 Plus infringed on Shenzhen Baili’s patent rights because of similarities to its 100C phone, the Bloomberg news agency reported.

Baili is among many smartphone makers trying to compete against established brands such as Apple and Samsung. Apple is expected to release its next-generation iPhone later this year.

Last month, Apple lost its fight to keep the “iPhone” exclusive to its products after a Beijing court ruled that a little-known accessories maker can use the label for a range of wallets and purses.

And in 2012, Apple paid $60 million to Proview International Holdings Ltd. to settle a dispute over the right to the iPad name in China, Bloomberg news reported.

Apple’s sales have slowed in line with China’s overall economic slowdown and in the face of stiff competition. In the first quarter of this year, revenue in Greater China, which includes Hong Kong and Taiwan, fell 26 percent to $12.5 billion.

In May, Apple announced that it had invested $1 billion in China’s most dominant ride-hailing company, Didi Chuxing, in a move widely seen as aimed at giving it a stronger economic and political foothold in China.