The routine became so familiar to Las Vegas Valley local Ted McGrath that every time he opened his insurance bill, he asked the same question. “What surprise am I going to get this month?” said McGrath, 62.

The last monthly bill he paid with Farmers Insurance was $235 for November 2015. He had never filed a claim. He had every discount possible. Yet whenever he asked a representative about his rate hikes, he never got a straight answer, he said.

McGrath’s monthly bill made him among Nevada’s higher payers. The average annual price of car insurance in Nevada was about $970 for 2014, the latest year available, according to the Insurance Information Institute. That’s about 7 percent higher than the average rate for 2011. More people, more driving and the cost of health care are parts of the reason why car insurance bills have increased.

The whole country has seen higher rates, said Michael Geeser, president of the Nevada Insurance Council, a nonprofit representative of Nevada’s property and casualty insurance industry. One reason: As the economy has improved, more people are willing and able to spend on new cars and travel more.

“The economy picks up, more people are driving, gas prices go up, insurance rates go up,” Geeser said. “It goes hand in hand. You take the good with the bad.”

Nevada has the 12th-highest average premium in the nation, but the state has ranked higher in the past, he said.

Accidents nationwide have gone down, but the cost of an insurance claim has increased, mostly due to the cost of health care and the cost of lawsuits related to car crashes.

In Nevada, a penalty for failing to have auto insurance has made drivers more diligent about keeping insurance updated, Geeser said. Fees and fines cost at least $251 after the first day of lapsed coverage.

“They probably should have more than that,” Geeser said. “But that’s easy to say and tougher to sell.”

Because rates vary per person, it’s difficult to say how much more policyholders will pay as a result of these increases.

However, the best guess is an increase of about $10 a month or about $120 a year, he said. Insurance companies are still waiting for state guidance on whether policies that include July 1 should get written with those minimums or if they apply only to policies written after July 1. Every auto insurer submits proposed rate changes to the state’s Division of Insurance, and state employees review the proposals to make sure they comply with state law, division spokeswoman Yeraldin Deavila said.

The proposed changes are either amended, approved or disapproved. Any proposed change to rates is developed and proposed by an individual insurer and not by the government, she said. 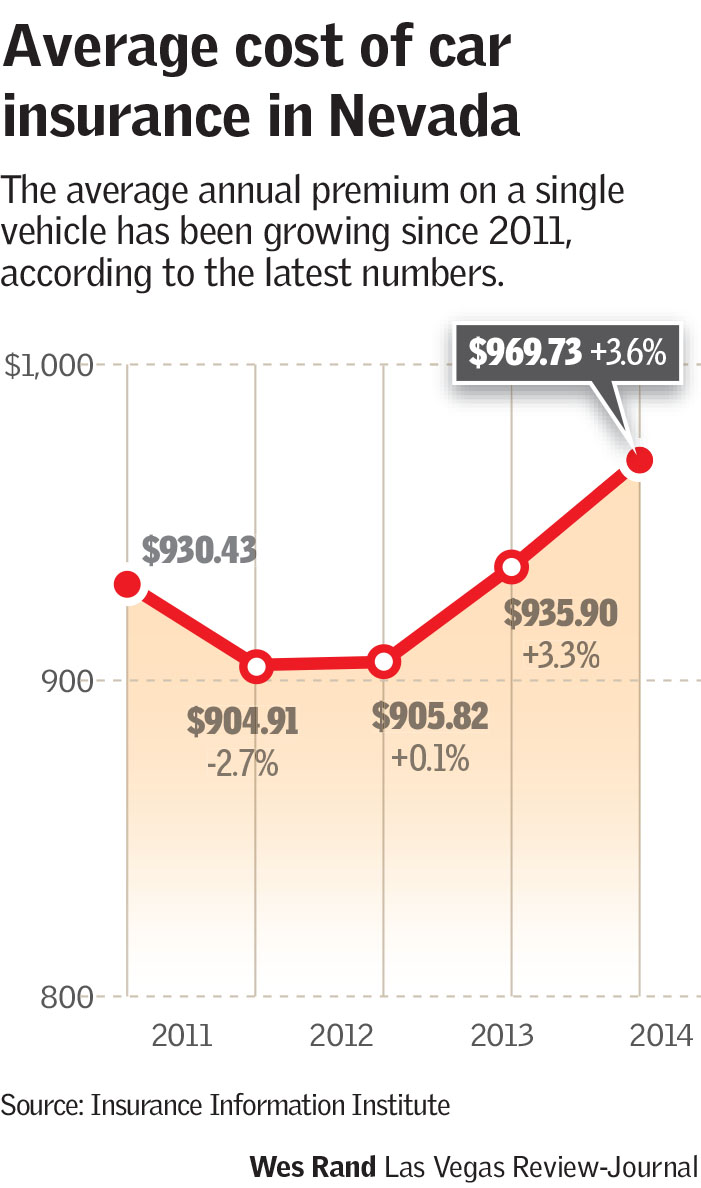 Factors that insurance companies use to calculate new rates include claims history, driving records, vehicle reports, the ZIP code, the year the car was made and its make and model, Deavila said.

Dante Thompson, a broker and agent with Insurance Group of Nevada, said a client of his saw a $600 increase to her annual premium after moving from one ZIP code to another in the valley with a higher crime rate.

Thompson recommends his clients try to save on their rates through bundling, or insuring different properties like houses and cars through the same insurance company. The most expensive part of a policy tends to be liability, especially bodily injury and per accident, but it can vary by driver. Liability can account for more than half of the bill.

But Thompson warns his clients against insuring property through new insurance companies or ones just expanding into Nevada. They may offer lower rates, but they are also more likely to fail.

“People tend to have short-term decision making,” he said.

As for McGrath, the man who once paid a monthly bill of $235, he switched to United Services Automobile Association, a financial group that services military members and their families.

Now he pays about $500 every six months. The extra money hasn’t turned McGrath into a spendthrift. He had some more to put toward a new truck last year and has more cash for his annual vacation outside Nevada.