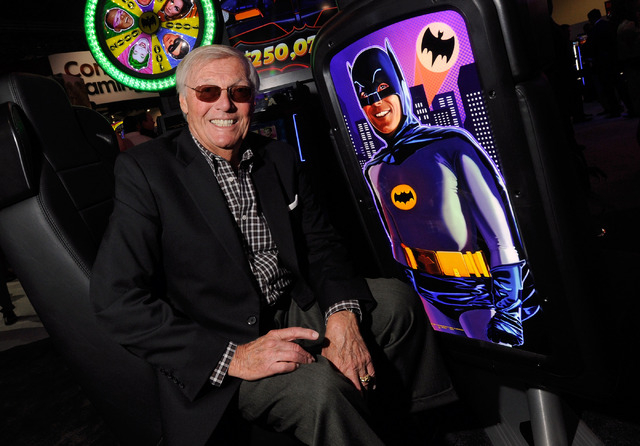 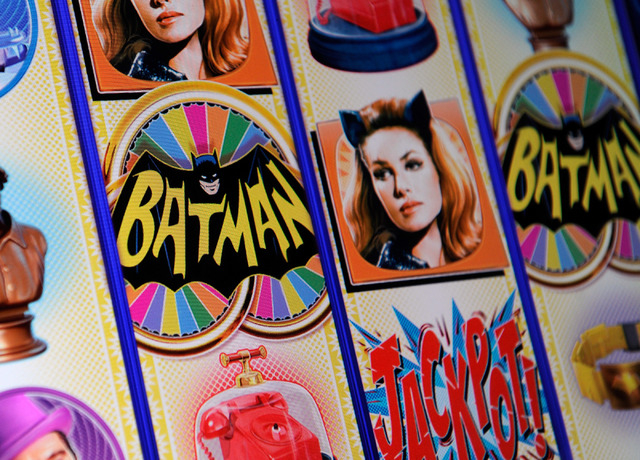 A general view of the Batman slot machine at the Aristocrat Technology booth during G2E at the Sands Expo and Convention Center on Wednesday, Sept. 25, 2013. (David Becker/Las Vegas Review-Journal) 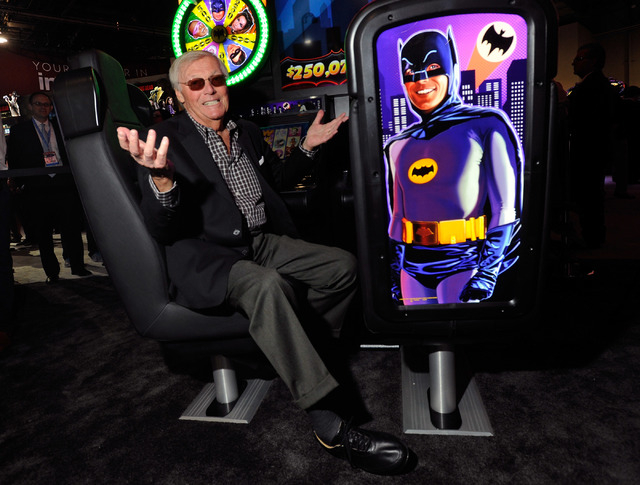 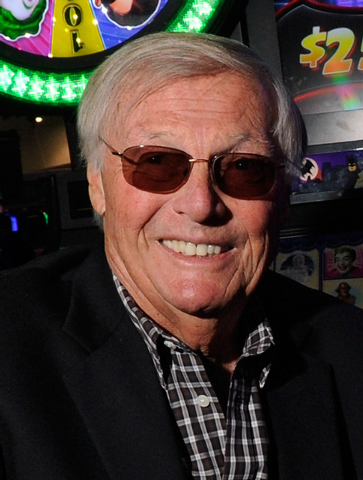 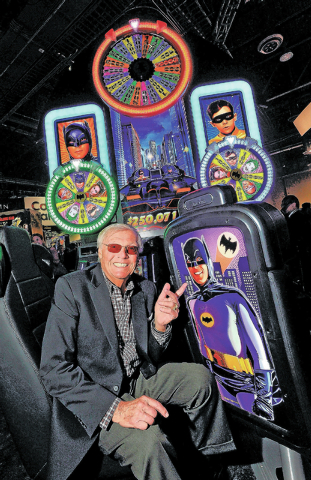 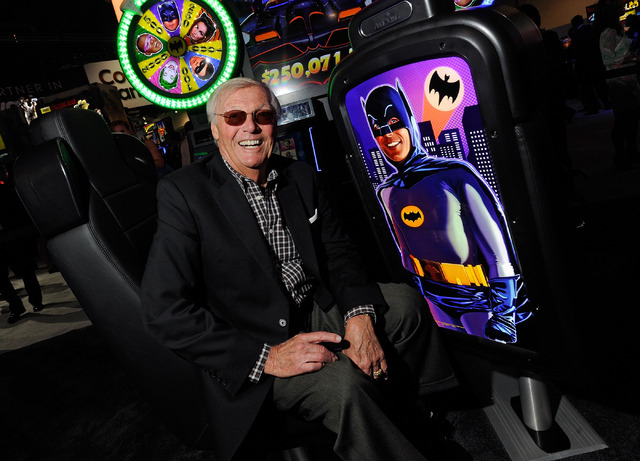 The tradeshow floor at the Global Gaming Expo opened at 10 a.m. on Wednesday.

By 10:05 a.m., the line of G2E attendees stretched the length of the Aristocrat Technologies booth.

They were waiting to meet Batman.

Aristocrat, an Australian-based gaming manufacturer, has created a video slot machine based on the 1960s television series.

The theme may be old school, but the technology, with imaginative bonus rounds and video clips from the show, is all 21st century design.

“Seriously, this is the most remarkable game I’ve ever seen,” said West, 85, who spent two hours in the Aristocrat booth talking with G2E visitors and signing photos from the 1960s television show that showed him dressed in Batman’s costume: a cape, the cowl and blue tights.

Later, he posed for photos with Aristocrat staff members in front of the game.

“I’m not used to machines that look this important in the Bat Cave,” West said, reprising his Batman character. “But actually, if you play this game, you will be privy to many of the secrets of the Bat Cave.”

West spent several hours in the Aristocrat studios providing custom voice recordings used on the slot machine, which includes images of Batman and Robin, and all the villains: The Joker, The Penguin, The Riddler, Mr. Freeze, King Tut and Catwoman. Even Alfred the butler makes an appearance.

“They did a remarkable job in putting this machine together,” West said. “I’m very flattered to be a part of it. These people are very good at what they do.”

Aristocrat Senior Vice President of Game Design Joe Kaminkow said his team spent weeks watching all 120 episodes of the Batman television series, which ran between 1966 and 1968 to find the right video snippets to use within the game.

“Multiple times,” said Kaminkow. “One of the great things is that the series is so rich and so diverse with images, we can refresh it and update it when we do a new version. We can’t capture all those years of great mayhem in just one game.”

Like the television series, the Aristocrat slot machine is far different from the International Game Technology game based of the Batman Dark Knight movie series that starred Christian Bale.

The Aristocrat game doesn’t take itself as seriously, using all the “Bam,” “Biff,” and “Pow” elements of the television show.

“It was a homage to the comic books,” West said of the series. “It was satire. It was supposed to be absurd to the adults, but the little kids caught on to it.”

Many of those kids, now adults, waited in line to meet West. They also got to view a re-creation of the 1960s Batmobile that was displayed near the slot machines.

Some of the younger folks in line recognized West from his second career, giving voice to “Mayor Adam West” on the syndicated animated television series “Family Guy.” West said the new career is similar to how he viewed Batman.

“Again, it’s theater of the absurd,” West said. “I get to use some of the quirkier aspects of my personality. I make fun of myself.”

West had an association with Las Vegas long after Batman went off the air. He appeared in videos on how to play various casino games that aired on in-house television channels in hotel-casinos. He also provided his voice to McCarran International Airport in the 1970s and 1980s for recorded announcements welcoming visitors to Las Vegas.

In keeping with the campy nature of the show, West said he had an idea why the Batman television series still reverberates with people who watched the show as children and young adults.

“When a television show goes off the air, it only has the longevity or staying power that is commensurate with the charm, intelligence, humour and great acting ability and the principal character,” West said with a smile.

Kaminkow expects the Batman slot machine to be on casino floors by early next year.

If the response to the game in casinos is similar to response on the G2E floor this week, West said that Aristocrat might have a winner.

So what will West think when he sees the game on a casino floor?

“Did they pay me enough,” he said.