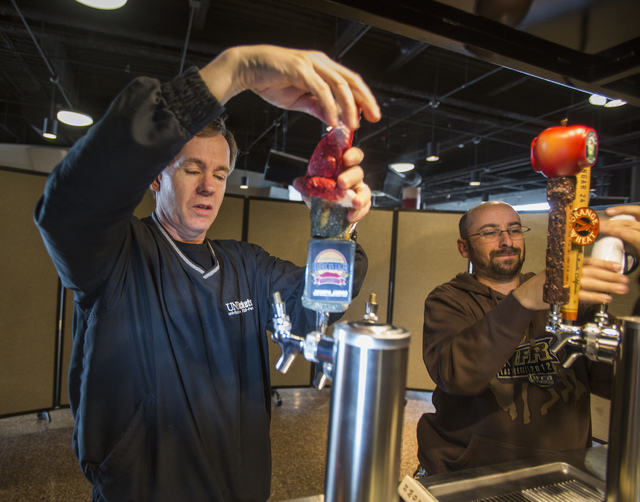 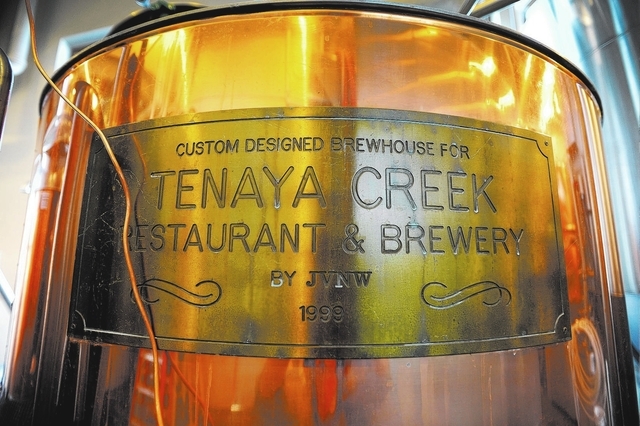 A brass plaque marks one of the tanks at the Tenaya Creek Brewery on Friday, Nov. 1, 2013. (David Becker/Las Vegas Review-Journal)

Beer history was made Thursday at the Thomas &Mack Center when the first local Las Vegas Valley craft beer was delivered at a local sports venue.

“Finally, what took so long?” said Tim Etter, owner of Tenaya Creek of Las Vegas, one of the two locally produced craft beers that will flow beginning Saturday at the University of Nevada, Las Vegas arena.

“It’s a long time coming. Local supporting local,” said Kayla Callahan, an operations assistant at Joseph James. “Now that I know they have good beer there, I will have to go.”

Craft beer sales are growing in the United States, and the Las Vegas market is beginning to catch the sudsy wave. But microbrew makers at local Las Vegas Valley brands such as Tenaya Creek, Joseph James and Big Dog have lamented that local sports arenas and stadiums may have been peddling national microbrews but not selling locally made craft beer.

“Nobody gave the local guys a shot,” Nevada Beverage craft brand manager Mark Lawson said. “We’ve been trying our best to make (craft beers) relevant in the market. This takes it to the next level. This is substantial. Both are award-winning beers.”

Tenaya Creek and Joseph James beers will be sold on the concourse in front of the Cox Pavilion near the student section. Lawson said now that the local microbrews will be available at Thomas &Mack, it’s up to Las Vegas beer drinkers to show their support and quaff the local beer brands.

Joe Carter, the arena’s food and beverage director, said having quality craft beer is part of creating a good time for the fans at Thomas &Mack.

“Anything we can do to put a smile on someone’s face enhances the experience,” Carter said. “I’m not the Bellagio. There’s only so much we can do over here. But we try. It’s nice to utilize local people.”