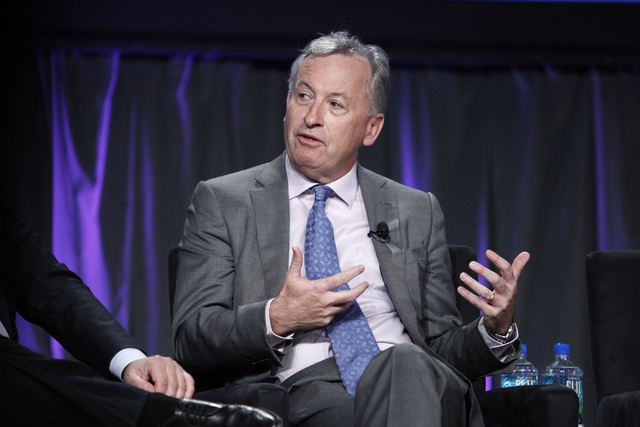 Australia-based Aristocrat Leisure Ltd. wasn’t left behind by the tsunami that engulfed the slot machine industry over the past 20 months.

The deal got lost in the flurry of megatransactions.

Aristocrat CEO Jamie Odell isn’t fond of rankings. When pressed, he’ll tell you the company is No. 3 in the commercial casino market, but is closing in on No. 1 in game placements at tribal-owned casinos.

Interactive gaming is Aristocrat’s fastest- growing segment. The company, which bought a San Francisco-based social gaming provider in 2012, tripled its revenue from the social gaming segment in the most recently completed quarter.

Odell lives in Australia. More than half the company’s managers, however, are in Las Vegas. At the beginning of June, as he does every month, Odell spent a few days in the U.S. assessing the casino business climate.

His trip included a daylong gathering with Aristocrat’s top American managers in a conference room at Encore. It was more than a training session or a sales meeting.

“The big moves have been made,” Odell said. “It’s now about being strategic in what we do to work with our customers.”

Aristocrat is not a small company. With the purchase of Video Gaming Technology, Aristocrat has 3,000 employees worldwide.

The goal is to remain agile to address the needs of its casino customers. That was message Odell brought to the company’s managers this month.

“We work hard to be nimble and that’s why it’s important to empower everyone to hold to that theme,” Odell said. “We have to have speed to market. That way, we can bring our products out faster.”

Aristocrat won accolades for its games over the past few years.

“Buffalo” is viewed as one the casino industry’s most popular slot machine titles and Aristocrat plans to unveil a new version at this year’s Global Gaming Expo in Las Vegas.

The company’s licensed products, such as “Batman,” “Tarzan,” and “The Walking Dead,” drive customer play. Waiting in the wings are slot machines based on “Sons of Anarchy,” “Game of Thrones,” and “The Big Bang Theory.”

The next step is moving those titles across multiple platforms — commercial casinos, Indian casinos and social games. However, the language of a negotiated license sometimes limits where the title can be used.

The acquisition of Video Gaming Technology not only expanded the company, it give Aristocrat quick entry into the Indian casino market. Odell said Aristocrat’s slot machine management systems are being integrated into the company’s new businesses.

Eilers, following the company’s six-month earnings report last month, said the performance of Aristocrat’s Video Gaming Technology subsidiary was “impressive” with revenue increasing more than 10 percent. Eilers wouldn’t be surprised if the upward trend continues through the rest of 2015.

Odell said the consolidation market looks finished — for now. He wouldn’t be surprised to see some small manufacturers merge or be acquired.

The next era involves skill-based video-style arcade games being integrated into slot machines. Nevada gaming regulators will be drafting rules on the concept, but discussions are already taking place in Aristocrat’s design studios.

Odell said the concept will draw casino customers, but he cautioned the idea may take a while to implement.

“The great attraction is they bring new players to the casino floor,” Odell said. “We’ll be thinking long and hard where to invest in that product. Like any emerging segment, you will find we have some ideas that will stick and some that miss.”

Odell credited former management of IGT with acquiring DoubleDown Casino for $500 million in 2012, which was the first major purchase of a social gaming site by the slot machine industry. The deal was roundly panned at the time.

“Credit to IGT for being courageous,” Odell said. “It’s amazing how strong slot machine content works on social gaming, and not just our products. It’s a great position for us to be in.”