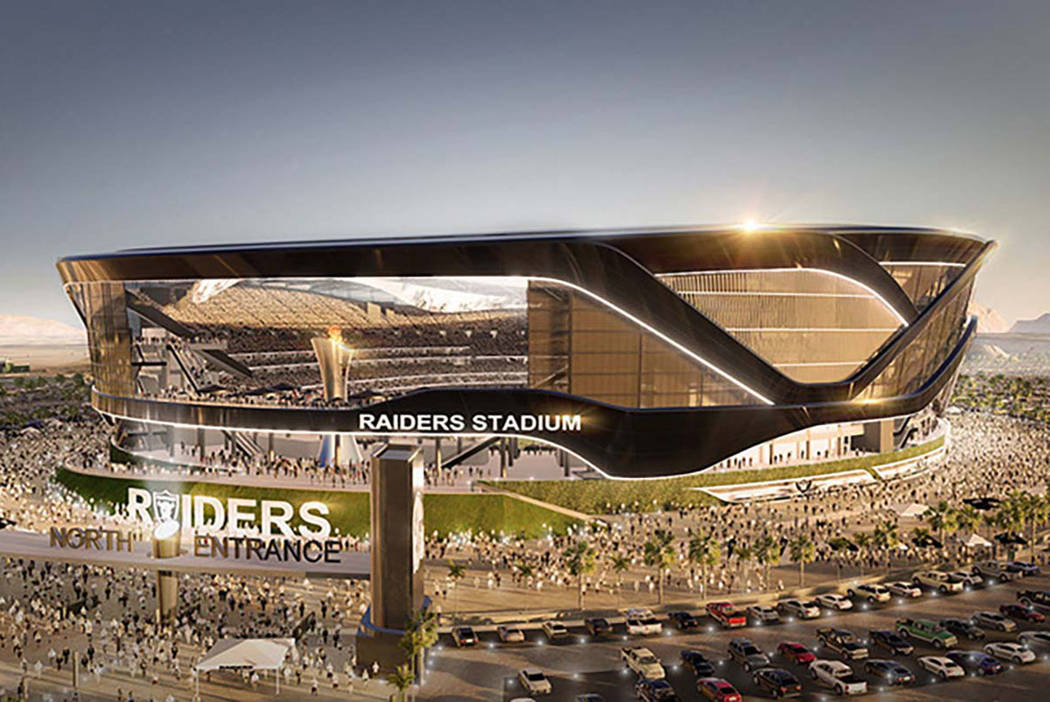 It was only a matter of time before one of Southern Nevada’s major gaming companies announced a presence at the $1.8 billion Las Vegas stadium being built at Interstate 15 and Russell Road.

Any of Las Vegas’ big six casino companies could have broken the ice, but it was Caesars Entertainment Corp. that ended up landing the first “founding partner” marketing deal with the soon-to-arrive Las Vegas Raiders.

As a founding partner, Caesars will host a branded stadium entrance and drop-off zone, digital signage, media, radio and print assets in addition to alumni, player and cheerleader appearances.

With the Caesars deal in place, it’s getting closer to the time for clarity about gambling at the stadium, which currently wouldn’t be allowed.

In London, fans attending games can place wagers at betting outlets at the stadium. That doesn’t appear to be in the cards at the Las Vegas facility.

Early in the legislative process to allocate $750 million in room-tax revenue toward the stadium’s construction, lawmakers were told there would be no gambling onsite. Lawmakers were concerned about the accessibility of slot machines to minors, an issue that occasionally is raised with the presence of machines in supermarkets, convenience stores and McCarran International Airport.

Those outlets provide space for machines because of the lucrative revenue stream they provide. It would be tempting to create such a revenue source for stadium upkeep and other expenses.

The Legislature enacted the Southern Nevada Tourism Improvements Act in October 2016, well before the U.S. Supreme Court’s repeal of the Professional and Amateur Sports Protection Act, which resulted in an explosion of interest in sports wagering and business alignments between casino companies and professional sports teams and leagues.

Now that times have changed, would there be any appetite to consider a sports-betting presence at the Las Vegas stadium?

Becky Harris is in the unique position of having served in the Legislature when decisions were reached on stadium financing and now chairing the state Gaming Control Board, which regulates the gaming industry.

She was among those who questioned the potential presence of gambling at the stadium, but she also recognizes she has a different role today.

“Should proposals be brought forward with regard to gambling in the stadium, we’ll assess them on their merits,” Harris said last week after the Caesars announcement. “I don’t want anybody to inadvertently get the idea that I’m opposed to gambling. I just had a concern at the time.”

The repeal of the law that limited sports wagering also has spurred a greater interest in mobile gambling apps. New Jersey bettors already wager more from their phones than they do from the new sports books that opened in summer.

The NFL is the professional league that has done the most hand-wringing about betting on its games. How will the league feel about the thousands of fans in the stands who will be betting as in-play wagering expands?

Then, there’s the blurred image of daily fantasy sports. The NFL endorses it. Is it gambling? The state of Nevada thinks so and would require such companies to be licensed if they were to set up operations in the state.

Harris, who concurs with the state attorney general’s office that daily fantasy sports is a form of gambling, said the issue has gone nationwide because some states believe it is, some believe it isn’t and some aren’t sure but are regulating it anyway through consumer protection legislation.