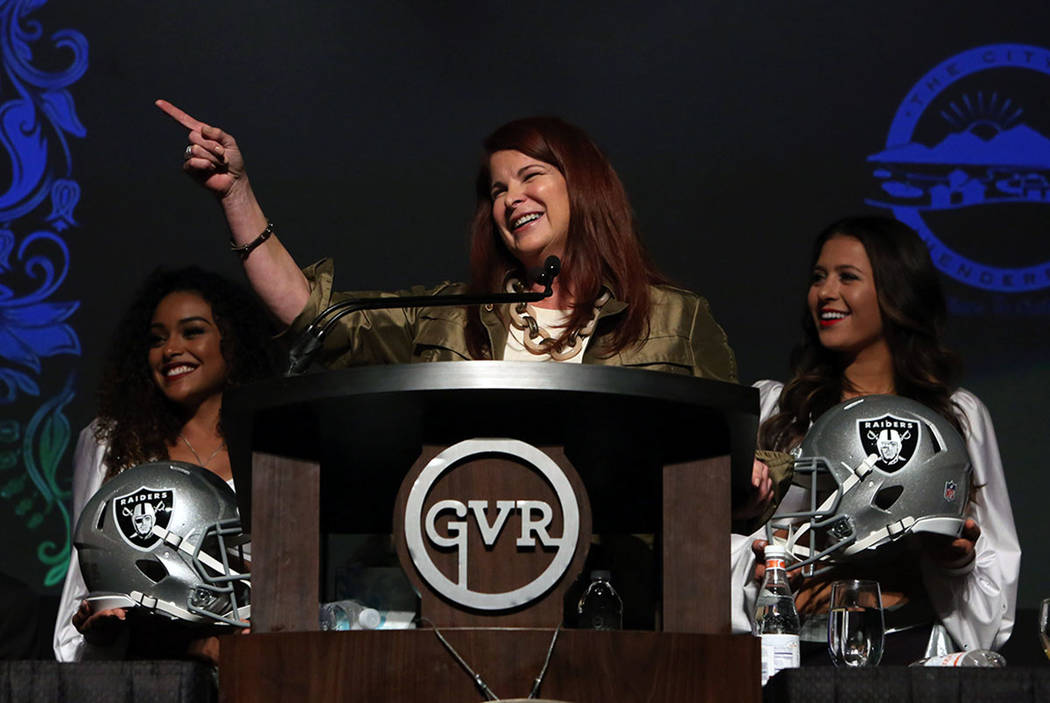 Tourism and gaming leaders are starting to think big about what Las Vegas is going to look like as an NFL city.

Much of the focus on the Oakland Raiders’ eventual relocation to Southern Nevada has centered around jobs provided by construction of a stadium to house the team before it arrives in 2020.

But the profile is bound to become much greater once the team gets here, and in the past few weeks, there have been glimpses of the potential that exists.

Start with what everyone should consider an “investment” the city of Henderson made late last month. The city is offering the Raiders 55 acres near Henderson Executive Airport for $6.05 million. The appraised value of the land: $12 million.

Yes, the Raiders are getting a fabulous deal for the land that is the presumed home of the Raiders’ corporate headquarters. It’s maybe 10-15 minutes away from the stadium but close to retail and residential areas where players will live, buy groceries and have their kids go to school.

It’s close to an airport that can handle corporate jets, and Penn National Gaming has to be excited that it’s down the street from the M Resort.

Meanwhile, at last week’s Las Vegas Convention and Visitors Authority board meeting, Pat Christenson, president of Las Vegas Events, offered a vision of what Raider game days could look like in Las Vegas.

Reviewing the success of fourth-quarter events coordinated by Las Vegas Events in Southern Nevada, Christenson shared the remarkable 10-day National Finals Rodeo visitor results that concluded Dec. 16. While an estimated 170,752 people attended the rodeo at the Thomas & Mack Center over 10 days, many more people went to 21 viewing parties downtown and on the Strip. Christenson is convinced that similar circumstances are likely on Raider game days.

“The reason this investment is so valuable isn’t that you’re just getting an NFL team and the impact of an NFL team,” Christenson told the LVCVA board. “We only measure the value of the people in the arena. But if you talk to the hotel operators, they’ll tell you that there are two or three times the people in their hotels during the NFR as in the arena. So that’s the vision.”

Sales at viewer parties, dinners out to take in the Vegas atmosphere on NFL game days and the gambling that occurs on the side make up the big value the Raiders’ presence will bring to the table. It will be interesting to see how creative casinos will get to draw customers for Raider viewing parties when the team plays.

And realistically, the team doesn’t even have to be in town for such a gathering to be successful.

There could be a Super Bowl-like atmosphere in town every week of the NFL season.

Jeremy Aguero, principal for Applied Analysis, was asked earlier in Tuesday’s LVCVA meeting whether he had researched the value of the Raiders’ and the NFL’s presence to Las Vegas. There are no data to support it yet, but Aguero offered an estimate of $45 million to $50 million a year in revenue generated through taxes related to the Raiders’ presence.

That’s where the dollars are going to be generated for education, health care, transportation and other services stadium critics say money would have been better spent.

The icing on the cake will be the eventual presence of the Super Bowl in Las Vegas.

That will be a huge undertaking, and R&R Partners executive Rob Dondero expects that could take statewide support to pull off.

“It’s all speculative, but I assume by looking at how it’s done in other markets it would be something that either the governor or somebody at that level of politics would make a decision on,” Dondero said. “If you look at how quickly new stadiums get Super Bowls, we could be looking at something as early as 2025. I assume in the next two to three years, we’re going to have to start thinking about it.”