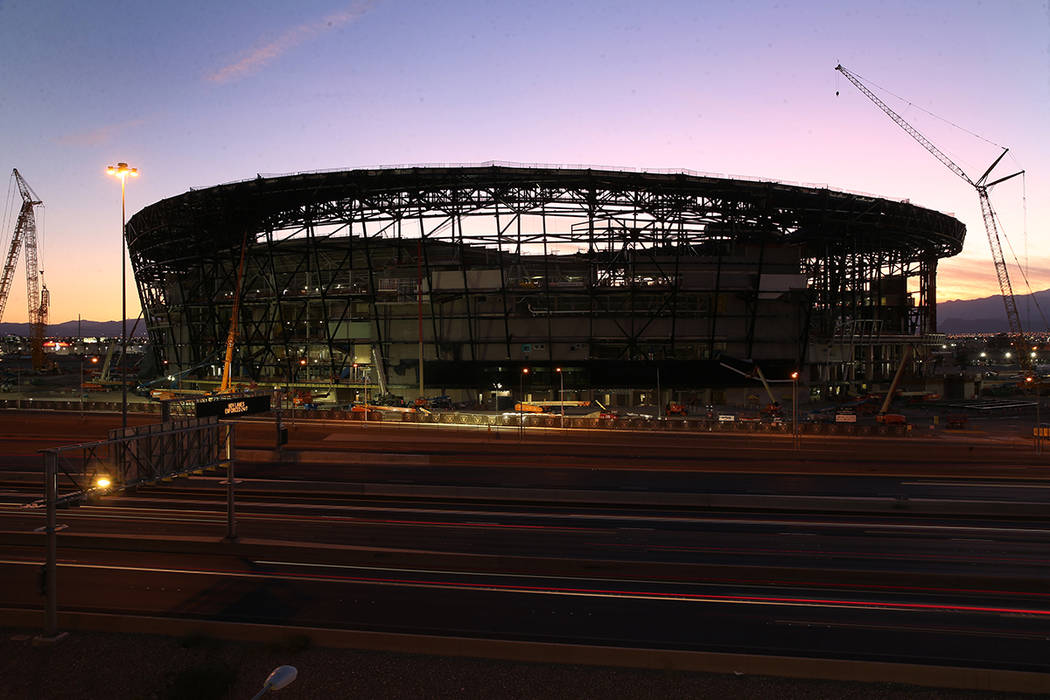 It didn’t take long for an obvious question to be asked about the Raiders’ better-than-expected personal seat license sales and new revenue generated with third-party sponsors:

If the Raiders are doing so well, why can’t they pay a larger portion of the overall cost of Allegiant Stadium and reimburse the public for the $750 million it’s contributing to the project through a 0.88 percentage point increase on hotel room taxes?

The answer, simply, is that’s the deal the Nevada Legislature made when a special session convened in October 2016. The possibility of taking back some money came up when the Legislature met, as well as when the Southern Nevada Tourism Infrastructure Committee debated the matter 3½ years ago.

But there is nothing in Senate Bill 1, which authorizes the financing of the stadium, that requires the Raiders to give back any of the $750 million that is meant to cover bond payments and, incidentally, is paid primarily by visitors to Southern Nevada, not local taxpayers.

Is it possible that the Legislature could reconvene and pass a bill to renege on its deal with the Raiders? Sure, but don’t count on that happening, considering that the person who would have to sign such legislation, Gov. Steve Sisolak, has been an ardent supporter of the project since he chaired the Clark County Commission and was a member of the Tourism Infrastructure Committee formed by executive order by then-Gov. Brian Sandoval.

The reality of the Raiders’ request last week to the Stadium Authority board to increase the stadium budget by $90 million to nearly $2 billion is that the public will still pay $750 million as its share. The Raiders are now putting in more than $1 billion, thanks to robust PSL sales and the new sponsorship deals the team has developed with Allegiant Travel Co., Twitch, Caesars Entertainment and others.

The additional revenue will provide upgraded furnishings and technology and a few more luxury boxes.

Jeremy Aguero has had a front-row seat to the financial arrangements for the stadium since Day 1, and he noted that the Raiders generating more revenue or the stadium costing less than expected were always possibilities.

“If costs came in less or revenue came in greater, it would be of benefit to the developer,” Aguero said. “The Raiders have demonstrated that they’re reinvesting a substantial portion of that into enhancing the stadium. That’s a very positive thing overall.”

Aguero, a principal for Las Vegas-based Applied Analysis, which serves as staff for the Stadium Authority, said the Raiders have other expenses ahead that aren’t in the stadium budget, including developing its team headquarters in Henderson, building off-site parking lots for stadium events and the NFL relocation fee it must pay for permission to move the team from Oakland, California, to Las Vegas.

“All the parties are meeting the expectations that were set forth in Senate Bill 1,” Aguero said. “Some revenues are coming in ahead of expectations, but other costs have been a little greater than expected. I think we’re getting the deal we bargained for, maybe a better deal than we bargained for.”

Aguero said he understands why some remain disappointed in the deal the state made.

“I think reasonable minds can differ, and I’m not trying to discount anyone’s point of view relative to this, but that is the deal as set forth in this project,” he said. “The public has a fixed amount of money that they were putting in for what at that point was a $1.8 billion stadium. Now the community has the same amount of public dollars that it’s putting in, and they’re getting an almost $2 billion stadium.”

Don Webb, the chief operating officer of the Raiders subsidiary building the stadium, noted that with the team’s additional investment, the percentage paid for with public money is shrinking. It will continue to shrink if more sponsorship deals are made and if the Raiders sell out their PSLs. The team expects to end sales by Thanksgiving.

When the stadium opens at the end of July, it will be owned by the public — not the Raiders — and the public will collect tax revenue with every event scheduled there. That investment is how legislators envisioned generating steady funds for the state’s education and health care needs.

“The land underlying the stadium has already been transferred to the Stadium Authority board,” Aguero said. “Every bolt and every piece of steel that gets placed in there, the public owns. The Legislature went to great lengths to make sure the public was very much protected in terms of its investment.”