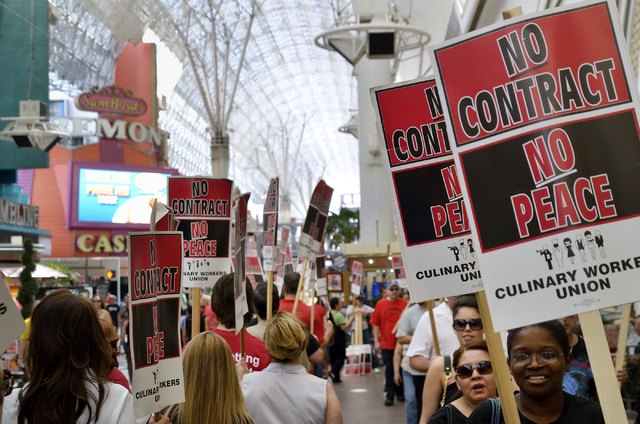 There was never going to be a strike by downtown Las Vegas hotel workers.

Despite the headlines and saber rattling, the leadership of Culinary Local 226 and Bartenders Local 165 wasn’t going to force union members to walk-off their jobs at properties that hadn’t finalized new contracts by 5 a.m. Sunday.

In fact, negotiations to settle contract language at the last remaining hotel-casino continued well past the unions’ self-appointed strike deadline.

The thousands of picket signs that union members put together last week went to waste. It was all a dog-and-pony show.

Downtown was never the concern.

Soon after talks wrapped up with the Golden Gate, Culinary leaders sent a clear warning to the union’s real targets — Station Casinos and The Cosmopolitan of Las Vegas.

“We will make sure that other casino workers in Las Vegas who aspire to the same union standard of living will be able to join our union family soon,” Culinary Secretary-Treasurer Geoconda Arguello-Kline said in a statement provided by the labor organization.

The Culinary also quoted Paris Las Vegas housekeeper Monica Munguia as saying, “We are now ready to support The Cosmopolitan workers, and the workers at Station Casinos to win their fights, too.”

Before embarking on contract talks with Strip and downtown casinos covering 44,000 union employees more than a year ago, the Culinary and Bartenders were obsessed with Station Casinos. The unions have spent several years attempting to organize 5,000 nongaming employees of the company’s 13,000-member workforce.

Informational picket lines and demonstrations took place in front of several Station Casinos properties. The unions also contacted convention planners, entertainment industry representatives and other businesses to try and keep them out of the company’s 17 Las Vegas-area casinos.

Meanwhile, the unions went to great lengths to publicize a September 2011 ruling against Station Casinos by a National Labor Relations Board administrative law judge who found the company committed 88 acts of unfair labor practices. In January 2013, the NLRB said the company satisfied requirements imposed by the decision and closed the case.

Station Casinos has said the company would not oppose a secret-ballot vote on union representation, as long as it was overseen by the NLRB. The unions advocate a card-check process that would allow employees to organize if a majority of workers simply sign union-provided cards.

But the Station Casinos activities went radio-silent when it came to renegotiate contracts for Strip and downtown housekeepers, cooks, food servers, cleaners, cocktail servers and other hospitality workers.

The Cosmopolitan, however, got caught up in the matter when the unions began picketing the Strip hotel-casino on Friday and Saturday evenings, demanding contracts with the unions covering nongaming workers.

The problem was German investment house Deutsche Bank never wanted to own The Cosmopolitan, which it was forced to complete at a cost of $3.9 billion when it foreclosed on the original owner.

Deutsche Bank might have solved everyone’s problems by agreeing to sell the property last month to a subsidiary of the Blackstone Group, a private equity firm, for $1.73 billion. Blackstone has a large ownership stake in Hilton Hotels, which has a good relationship with the Culinary’s parent union.

“The property’s change of ownership could help smooth negotiations,” Union Gaming Group analyst Robert Shore said. “The relationship between Blackstone and the Culinary union has historically been positive.”

Which leaves Station Casinos the focus.

A spokeswoman for the casino operator declined comment on the pending union matter.

The Culinary and Bartenders still need to schedule ratification votes at the nine downtown casinos that reached contract settlements last week. According to sources, economic terms for the downtown properties were similar, including raises of 35 cents per hour retroactive to last year, 50 cents per hour this year and 55 cents per hour in 2015. The unions agreed to several concessions, including the allowance of more part-time restaurant employees.

The unanswered question is how much of the wage increase will be diverted to the unions’ health plan and pension fund.

Before the year is out, however, expect to see Culinary and Bartenders members holding informational pickets in front of Station Casinos’ properties.

At least the unions can recycle the wooden sticks from the discarded downtown picket signs.