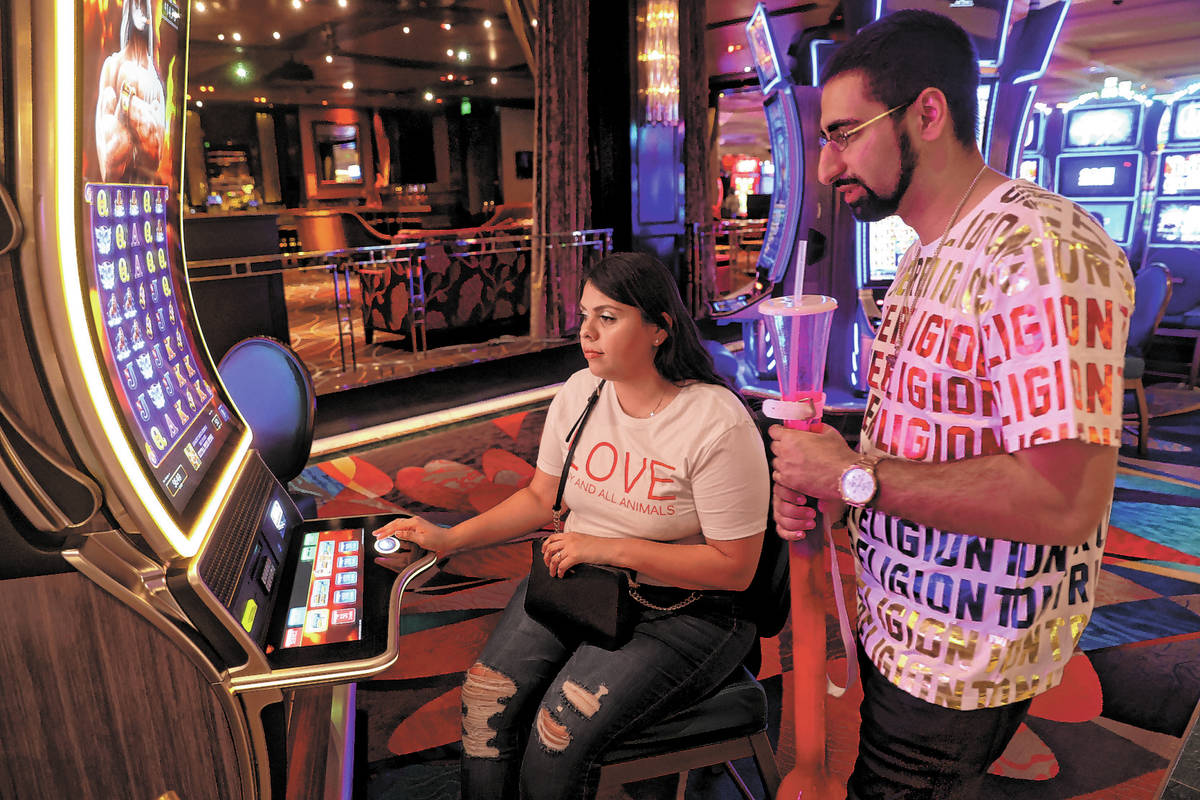 Arash Shahbazian and Michelle Muniz of Los Angeles play a slot machine at the Bellagio on the Strip in Las Vegas on the first day reopening after 78 days shut down due to the coronavirus on Thursday, June 4, 2020. (K.M. Cannon/Las Vegas Review-Journal) @KMCannonPhoto

Resorts have been investing millions in their non-gaming attractions to bring in visitors.

But Las Vegas Convention and Visitors Authority’s Visitor Profile report for 2019 found last year’s tourists were more likely to say the main purpose of their trip was to gamble. And, four in five said that they had gambled during their visit — the highest level in the past five years.

“The survey said we now have a more gaming focused visitor,” said Kevin Bagger, the LVCVA’s director of research. “The percentage that said they gambled has hovered around 70 to 74 percent. In 2019, it bumped up to 81 percent.

“The time spent gaming, the average number of hours, also increased to 2.7 hours vs. 1.2 hours,” he said. “Their gaming budgets also increased.

Bagger said there were fewer visitors with children, another indication that more adult pursuits are being sought.

That evidence might also support Derek Stevens’ recent announcement that when his Circa resort in downtown Las Vegas opens in October, that no one under 21 will be admitted. Efforts to ban children at Las Vegas resorts in the past have failed, but Stevens seems determined to offer a fully adult atmosphere.

“In 2019, we had higher spending visitors across most spending categories so we had strong spenders in the destination, more air visitors as well, and the air-auto mix was moving toward more on the air side (indicative of higher spending abilities),” Bagger said.

The LVCVA’s Visitor Profile report is an important document for the tourism and gaming industries, noting trends that enable Las Vegas resort companies to best satisfy the 43 million people that visit Las Vegas, whether for work or play.

“One thing I always check is that the satisfaction rate remains strong,” Bagger said. “In 2019, visitor satisfaction was 99 percent, up from 98 percent the year before.”

The 94 percent listed as “very satisfied” was the highest in five years with the 5 percent “somewhat satisfied” the lowest proportion in that time frame.

Interestingly, the biggest complaint among visitors that were “somewhat satisfied” was that the trip was too short, beating out complaints that it was too expensive, they didn’t win enough gambling or smoking policies.

Now, the question for Bagger is to determine whether the revelations of the 2019 Visitor Profile are a trend — not an easy task in the COVID-19 era.

Visitor surveys have been suspended for now. The number of young adult visitors is going up while there are fewer Baby Boomers. That seems to mirror people’s level of vulnerability to the coronavirus, with Baby Boomers more likely to observe new facial covering rules and abide by social distancing than their younger counterparts — or not come at all.

The 2020 Visitor Profile will be a fascinating read, given the year we’ve all had so far.