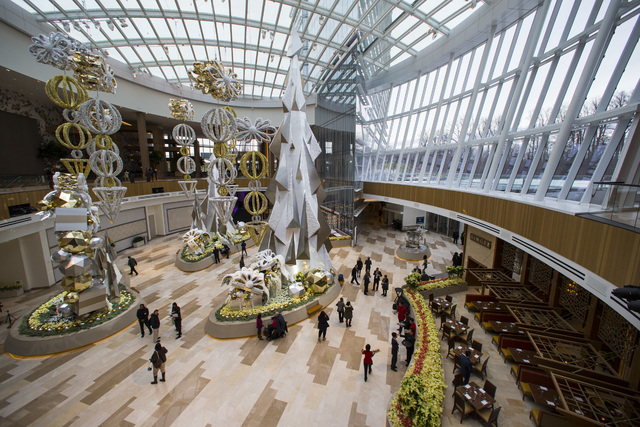 OXON HILL, Md. — All right, let’s get this over with right at the top.

Yes, guests of MGM National Harbor are going to have to pay to park their cars.

No, officials haven’t set a rate or determined when they will initiate a self-parking fee.

Thankfully, there are far more compelling stories about the new MGM Resorts International property that opened its doors Thursday night than parking.

For starters, there are the what-if conversations that MGM employees are having about National Harbor’s status within the company hierarchy. Specifically, if you were able to plop the property down on the Strip, how would it rate among what Southern Nevada has?

To get National Harbor running, company officials solicited leaders in all of the company’s major work groups in Las Vegas, Detroit, Atlantic City and Biloxi, Mississippi, to come to Maryland to show the 4,000 new employees the MGM way.

Some of the conversations included that how-would-Harbor-fare question.

The consensus: It would do extremely well. Overall, MGM National Harbor is that good.

The bright environment provided by Harbor’s conservatory might outshine the Bellagio conservatory because designer Ed Libby focused on placing a number of reflective surfaces in the Harbor version.

“In today’s environment, it’s all about the selfie, and there are some surfaces that actually reflect individual images,” Libby said.

Like the Bellagio conservatory, Harbor will have themed floral seasons and a change in scenery for Chinese new year, spring, summer, fall and the 2017 holiday season.

When Libby was asked to bring a rendering of a holiday display as part of his audition for the job of overseeing the conservatory, he brought two holiday designs. MGM liked both of them so much that officials decided to use the second display next year, so that plan is already in the bag.

The rest of the amenities — the restaurants, the spa, the casino and the hotel — are all up to high-end Las Vegas standards.

The only shortcoming Harbor might find if it were in Las Vegas is the size of the hotel — just 308 rooms and suites. But the rooms have top-drawer features, so it should easily be able to fetch the $399-to-start room rate from customers.

The 4,000-seat Theater at National Harbor already has an enticing lineup of shows on its horizon, and it’s a venue that is unmatched in the Washington, D.C., market. With Boyz II Men, Cher and Lionel Richie, among others, on the horizon, National Harbor should have no problem drawing guests for entertainment.

With the music and comedy, the property is looking at plans for boxing and mixed-martial arts matches. President and Chief Operating Officer Lorenzo Creighton said no sporting events are scheduled at National Harbor just yet. But once the property gets a few shows behind it, boxing and MMA won’t be far behind.

As for conventions and meetings, that might be one area where Harbor is a little light. With just 50,000 square feet of meeting space, the property wouldn’t be able to accommodate anything too big, and the low room count also would prohibit that.

But Creighton said the company has kept in communication with its neighbors at the Gaylord National Resort and Convention Center less than a mile away and will collaborate on making sure any overflow guests attending big conventions there can find a room at National Harbor.

Another potential issue for National Harbor: traffic. As my Uber driver made his way to the property for the first time, he cringed and said, “This could be bad,” as two lanes merged to one at a critical entrance just outside the hotel.

First-night traffic can’t be a real gauge of what’s to come, but the traffic outside National Harbor on opening night was horrendous.

Locals also are concerned about what rush-hour traffic is going to look like on the interstates near National Harbor when some of that 20,000-guests-a-day traffic arrives. There’s little public transportation in the area; the Metro light-rail system doesn’t reach out to the area.

The Gaylord is already a major traffic generator, and there aren’t many route options in and out of National Harbor, so traffic could be a little dicey on those concert nights.

Finally, one other National Harbor story I found fascinating is the change in taxation rates that is occurring with the opening of MGM’s property.

Prince George’s County, where National Harbor is located, opted out of gaming but decided to get back in when MGM was considering something different from those slot-dominant properties. It took a special session of the Maryland Legislature and a public vote to do it, but now, the new concept and the integrated resort that is MGM National Harbor is open.

Anticipating that National Harbor would steal some market share away from two existing casinos, Maryland Live! in Hanover, Maryland, and the Horseshoe Casino in Baltimore, the state’s gaming regulators opted to change the taxation rate on those two properties as soon as MGM opened.

Gordon Medenica, director of the Maryland Lottery and Gaming Control Agency, said tax rates would come up for review in 2019 for possible adjustments. He said he thinks modifying tax rates as a means of compensating for reduced market share is unique to Maryland.