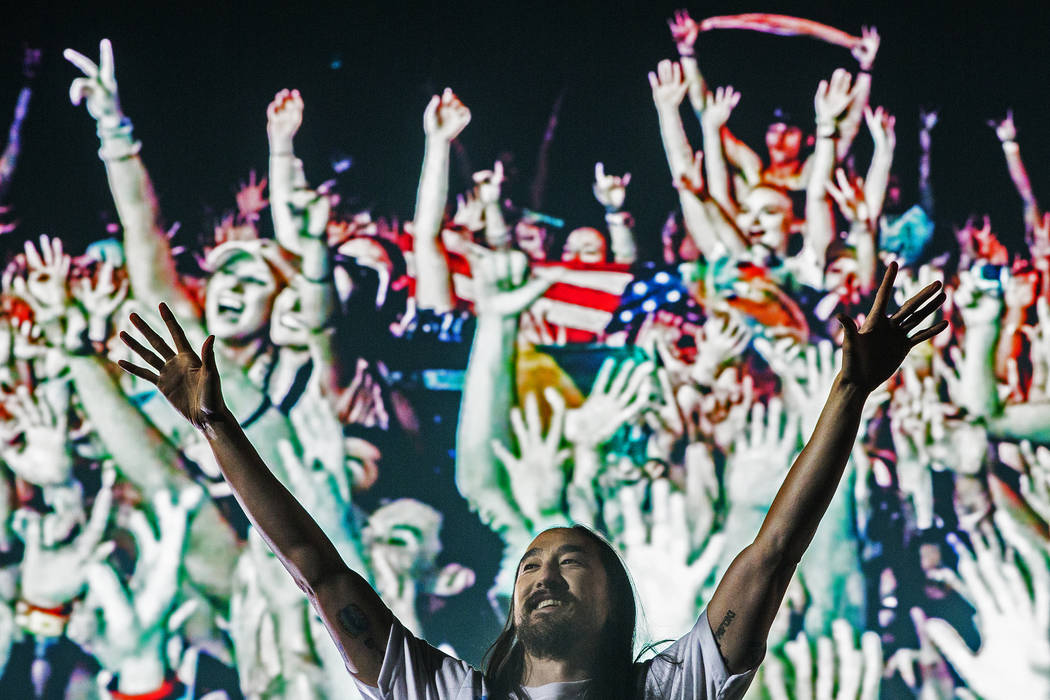 Steve Aoki pumps up the crowd during his performs at the Circuit Grounds stage on day three of Electric Daisy Carnival at Las Vegas Motor Speedway on Sunday, May 19, 2019, in Las Vegas. (Benjamin Hager/Las Vegas Review-Journal) @benjaminhphoto 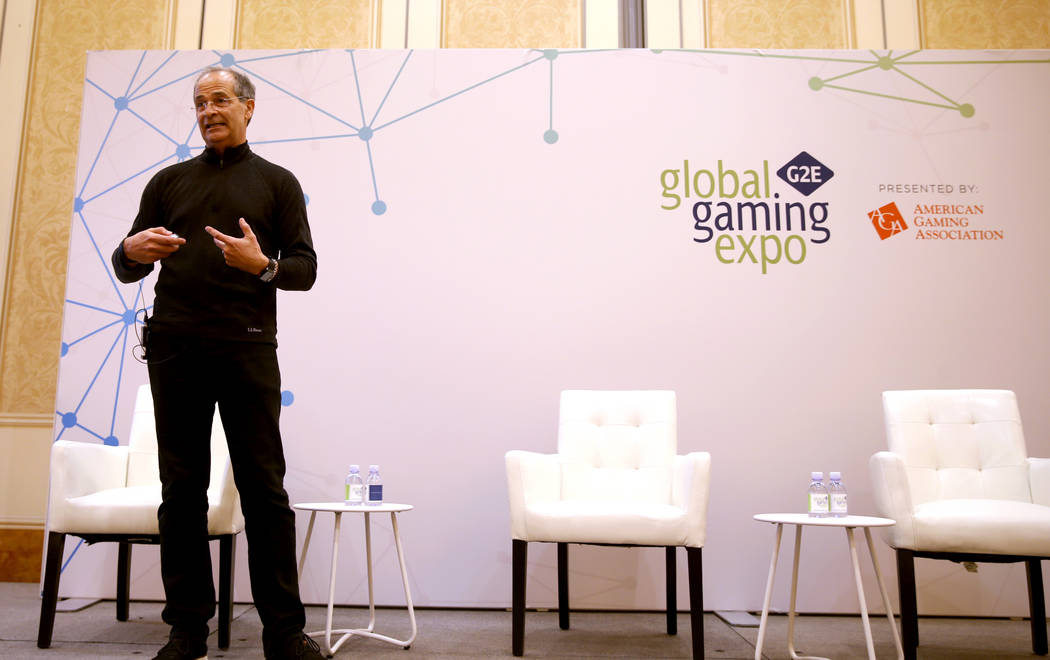 Robert Rippee, director hospitality and esports labs at UNLV, gives a talk "Should Casinos Have a Specific Strategy Just for Millennials?" at the 2019 Global Gaming Expo at the Sands Expo and Convention Center in Las Vegas Wednesday, Oct. 16, 2019. (K.M. Cannon/Las Vegas Review-Journal) @KMCannonPhoto 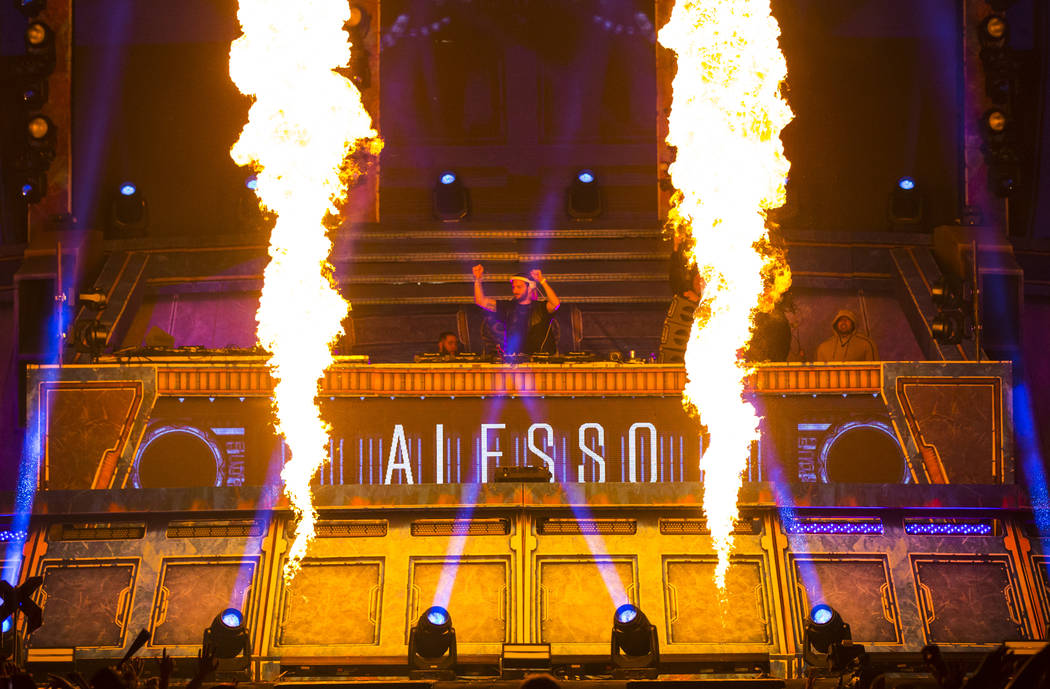 Alesso performs at the Kinetic Field stage during the first day of the Electric Daisy Carnival at the Las Vegas Motor Speedway in Las Vegas on Saturday, May 18, 2019. (Chase Stevens/Las Vegas Review-Journal) @csstevensphoto 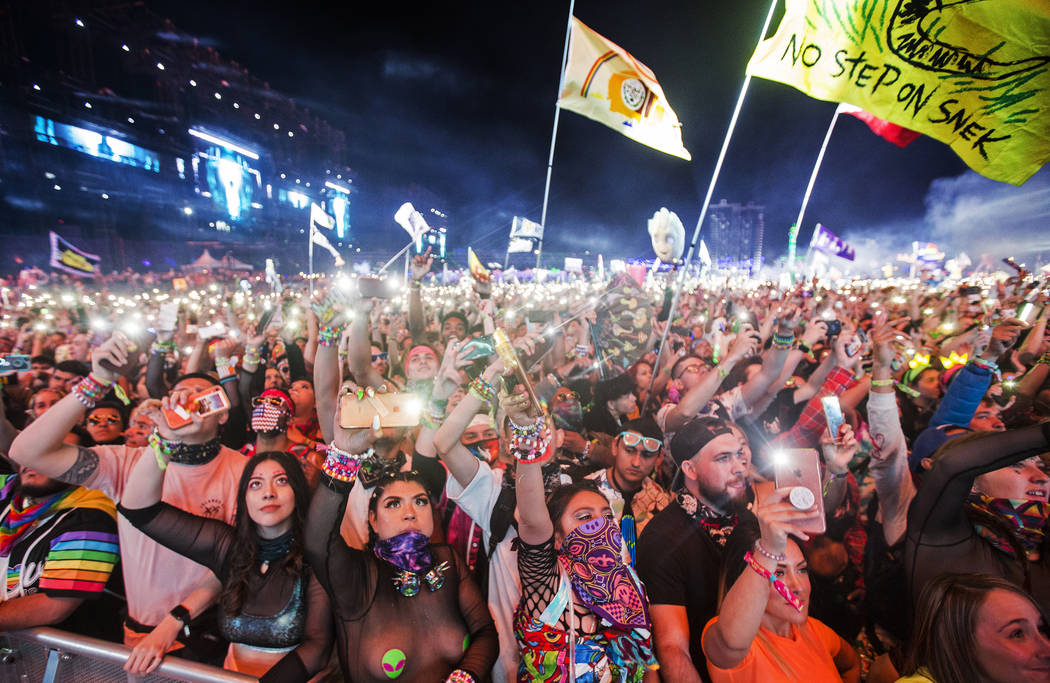 How do casino companies get more millennials into their properties?

Easy: Make casino floors more like the Electric Daisy Carnival. Or, at least, learn why EDC — the electronic dance music festival that has its flagship event at the Las Vegas Motor Speedway every year — is so successful at drawing what has become the largest generation of consumers.

Robert Rippee, director of hospitality and esports labs at UNLV, offered that premise in a presentation at this month’s Global Gaming Expo in Las Vegas.

There were plenty of skeptics when Insomniac, the company that produces EDC, announced in 2011 that it would move the event that has an annual attendance of more than 400,000 over three days (though many attend every night) from Los Angeles to Las Vegas.

EDC attendees would clog the streets, the critics worried. They’d sleep 10 to a room in hotels or camp out. They’d all be high. Worst of all, they wouldn’t play in the casinos.

Most of the fears were unfounded — except for the part about going to the casinos.

Rippee contends that most casino companies haven’t done much to attract the generation of 25- to 29-year-olds that in 2018 numbered around 23.5 million, compared with the 22 million baby boomers ages 55-59.

Statistics from the Las Vegas Convention and Visitors Authority show good reason for casinos to focus more attention on that front.

The study, based on a survey of 3,500 visitors, also showed the number of visiting baby boomers has been slowly declining since 2014, while the percentage of visiting millennials has bounced between 12 percent and 22 percent over the past five years.

Rippee said the industry hasn’t done enough to study what makes millennials tick. He believes they thrive in environments of chaos.

“Every casino operator that I speak to — every one, across the board for the last five or six years — would say, ‘We’ve done poorly,’ ” Rippee said in his presentation.

“We see them walk through our casino floor, and the stereotype is that they’re walking across the casino floor to go to the nightclub,” he said. “So they’re doing a good job of building nightclubs and chaotic types of experiences that employ some of those features, but when it comes to the other elements that traditionally have defined a casino resort, it’s been problematic.”

The reason: Most haven’t witnessed the chaos that is EDC. They haven’t watched “Ninja” — 28-year-old Tyler Blevins, an entertaining Fortnite player, who streams his video-game play and has 14 million followers.

Rippee explained why EDC clicks with the younger crowd.

“It’s lots of different things. So what EDC tells me as a successful effort toward a younger generation is chaos. There are lots of things happening simultaneously that they make sense out of it and interpret it as experience and fun.”

Rippee stressed that the industry can learn from EDC and Ninja but shouldn’t try to copy them. How can casinos do that?

The industry will have a new resource in a few months that may provide some answers.

The two-story facility is being built at the Harry Reid Research and Technology Park in the southwest valley. It includes a 43,000-square-foot lab, work space and a replica resort and casino. Within the walls of Black Fire Innovation, industry entrepreneurs and students will be able to test products and services with audiences to see whether they are engaging.

“One of our goals for the space is to look at next-generation tech and how it fits in the gaming and hospitality sectors across a variety of demographics, including among millennials,” said Zach Miles, UNLV’s associate vice president for economic development.

A Caesars representative said the company has received keys to the building and is preparing to announce some of the partnerships it has developed to make Black Fire Innovation a proving ground for the next generation of casino customers.

The facility is expected to be fully operational by early 2020.