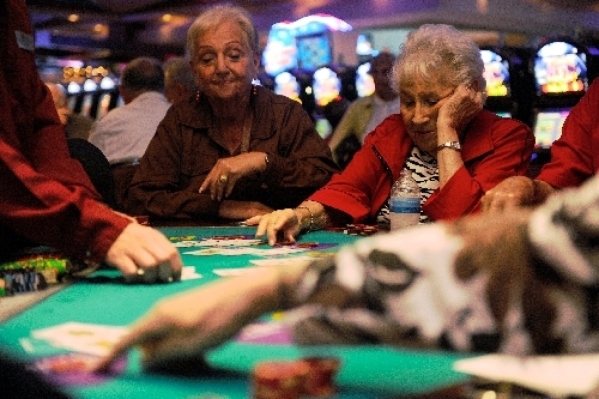 Table game play is seen at the Seminole Hard Rock Hotel & Casino in Hollywood, Fla. The Seminoles are seeking to operate craps and roulette tables at the tribe‘s seven casinos in Florida. Las Vegas Review-Journal file

On the surface, the new gambling compact between the Seminole Indian Tribe and Florida Gov. Rick Scott looks like a win-win for both sides.

The state is guaranteed $3 billion over the next seven years from the tribe. In exchange, the Seminoles will be allowed to operate craps and roulette tables at the tribe’s seven casinos.

The agreement limits competition. As written, it prohibits another destination gaming resort from being built in Florida while allowing pari-mutuel racing facilities in South Florida’s Miami-Dade and Broward counties to add blackjack tables.

Remember, this is Florida, where gaming expansion is far from is simple.

State lawmakers are required to approve the compact. Observers said the deal will be one of the most heavily lobbied issues in the 60-day legislative session, which began last Tuesday.

A poll commissioned by the Florida Chamber of Commerce found a majority of the state’s residents believe the compact is good for the state or they are neutral on it.

But several racetracks outside Miami and Fort Lauderdale said they were cut out of the agreement and plan to ask the state’s Supreme Court for approval to have slot machines. The Poarch Creek Indian Tribe wants to the state to approve a casino on its reservation land in northern Florida.

Before the session started, state Senate Majority Leader Bill Galvano told the Florida Gaming Congress meeting in Orlando there was “a very real possibility” the compact would be rejected.

If the deal falls apart, the state could find itself in a legal skirmish with the Seminoles, who could lose their blackjack and baccarat tables that were part of the current compact.

“We would prefer to reach a resolution, have the compact signed, continue the amazingly positive relationship we’ve had with the state of Florida and move forward for the next 20 years,” Seminole CEO James Allen told the Gaming Congress.

The Seminoles rule Florida gaming. The tribe operates all but one of the state’s eight Indian casinos, including the Hard Rock resorts near Tampa and Hollywood and Seminole-branded casinos throughout the south. With a new compact, the tribe will spend $2 billion to renovate and expand its holdings, including adding second hotels to the two Hard Rocks and a hotel, showroom, conference center and expanded retail to the Seminole Casino Hollywood.

When you account for the Miccosukee Indian Tribe’s casino near Miami, eight racetrack casinos with slot machines and the $5 billion a year Florida lottery, the state “is most likely one of the largest gambling markets in the county,” Beynon said.

It could have been larger.

Florida considered adding casino resorts in Miami and Fort Lauderdale in 2012, drawing interest from Nevada’s largest gaming companies. But the gaming bill died in the Legislature after opposition surfaced by the anti-gaming Walt Disney Co. and the Seminoles. The Nevada casino operators packed up their lobbyists and set sights on other potential markets, such as Georgia.

“Operators have been trying to build something in Miami for decades,” Beynon said.

Genting, which is developing the $4 billion Resorts World Las Vegas, spent $500 million in 2011 to acquire a 30-acre site fronting Miami’s Biscayne Bay for the planned $3.8 billion Resorts World Miami, a complex with 5,000 hotel rooms, 1,000 condominiums, gaming, retail, dining and other attractions. The company still owns the land, even after lawmakers shelved the 2012 gaming bill.

“Only when Genting purchased prime real-estate in Miami did the discussions become important for Florida legislators,” Beynon said.

Beynon said the Seminole compact was “incrementally positive” for Genting, figuring the company would seek approval to operate slot machines with a scaled-down development on the Miami site.

The compact is a bit more tenuous for Isle, which operates a slot machine-only casino at the Pompano Park racetrack that accounts for 15 percent of the company’s annual cash flow. Isle and other racetrack casino operators are hoping to lower their tax rates and add blackjack tables to offset business lost to the expanded Seminole operations.

During Isle’s second quarter conference call in December — a week before the compact was announced — CEO Virginia McDowell addressed the issue with analysts.

“We are very active,” McDowell said. “We continue to work towards whatever parity we can get, and we are working the process diligently at this point.”

Scott, in announcing the early December agreement, said the compact provided “the foundation of a stable and predictable gaming environment for the state.”

It’s Florida. Nothing is predictable.