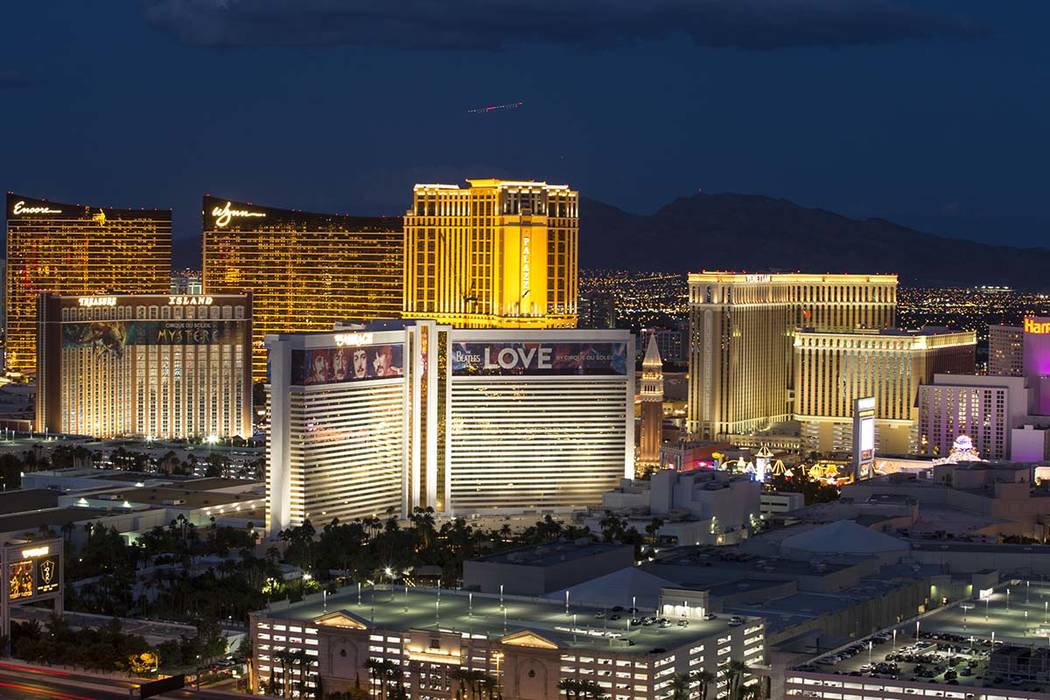 The Strip skyline lights up at dusk as seen from the VooDoo Lounge atop the Rio hotel-casino in Las Vegas. (Review-Journal file photo)

One of the last chapters of the Steve Wynn sexual harassment scandal that began two years ago comes to a close next week.

A new gaming regulation that will take effect March 1 requires licensed operators with more than 15 employees to have a policy addressing the prohibition of all forms of discrimination and harassment available for inspection by Nevada regulators.

The Nevada Gaming Commission approved the regulation in November.

Wynn, who denies ever harassing anybody but paid a multimillion-dollar settlement to one of the accusers, reportedly is living in Florida.

The new regulation says gaming companies “shall adopt and implement written policies and procedures prohibiting workplace discrimination or harassment of a person based on the person’s race, color, religion, sex, sexual orientation, gender identity or expression, age, disability, or national origin, including, without limitation, sexual harassment.”

Licensees’ biggest complaint about the regulation is that it has duplicated rules already in place, but it was clear that the state Gaming Control Board and the Gaming Commission felt they had to do something in response to the shocking allegations that Wynn Resorts Ltd. already has paid for — fines of $20 million in Nevada and $35.5 million in Massachusetts.

Most of the big companies already have such policies in place, since businesses are overseen by the federal Equal Employment Opportunity Commission and the Nevada Equal Rights Commission on discrimination issues.

Diane Welch, an attorney in the employment and labor law group with the Las Vegas office of McDonald Carano, said gaming companies should dust off their policies to make sure they comply with the new regulation.

“It’s just a matter that those that have policies need to take a look and make sure they adhere to what this new regulation says, and if they’ve been in compliance with requirements for NERC and EEOC, they should be in pretty good shape,” she said.

Welch said it’s unclear just how vigorously the Control Board intends to enforce the new rule. What is clear is that the chair or the chair’s designee, through the board, can punish a licensee if it doesn’t have such a policy in place.

She also pointed out that not only does a company have to have a written policy available for inspection, but it also must explain how the policy would be enforced and how the company would respond if someone came forward with a complaint.

“It’s got to have procedures as well for how you’re going to investigate how people report that sort of thing,” Welch said. “And, if they find some deficiency there or a gaming company doesn’t have the required policy and procedure, they’ve got the discretion, just like they do with other violations, to take action. They give an opportunity to cure that problem, and if they don’t, they might do some other disciplinary action on them under the reg.”

Other disciplinary actions can range from fines to initiating a path toward suspension or revocation of a license.

While a regulatory chapter has closed, the saga of Steve Wynn hasn’t ended.

In December, the Gaming Commission unanimously agreed that it has the authority to judge Wynn and his suitability to hold a gaming license in the five-count sexual harassment complaint brought by the Control Board against him.

Wynn’s attorney, Donald Campbell, said at the time of that decision that he would file an appeal on behalf of Wynn and that he expects it to go all the way to the Nevada Supreme Court. His argument before the commission was that Wynn voluntarily left the industry and thus no longer has a license.