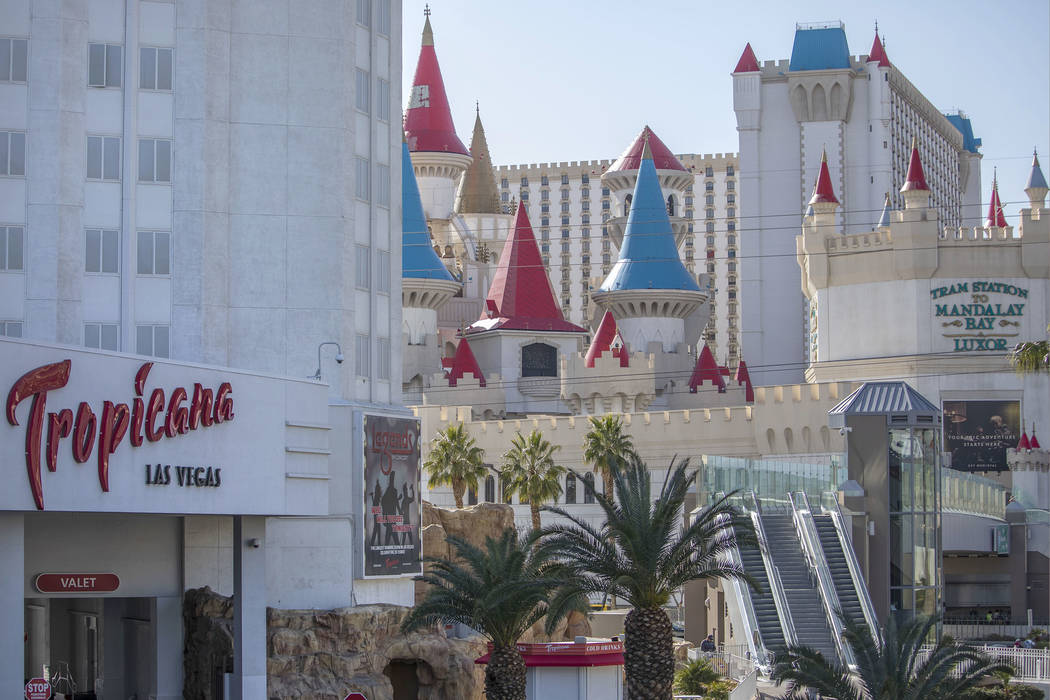 Tropicana is seen on the Strip with Excalibur in the background on Wednesday, Feb. 19, 2020, in Las Vegas. Investors have contacted Tropicana's parent company about buying the resort. (Ellen Schmidt/Las Vegas Review-Journal) @ellenkschmidt_ 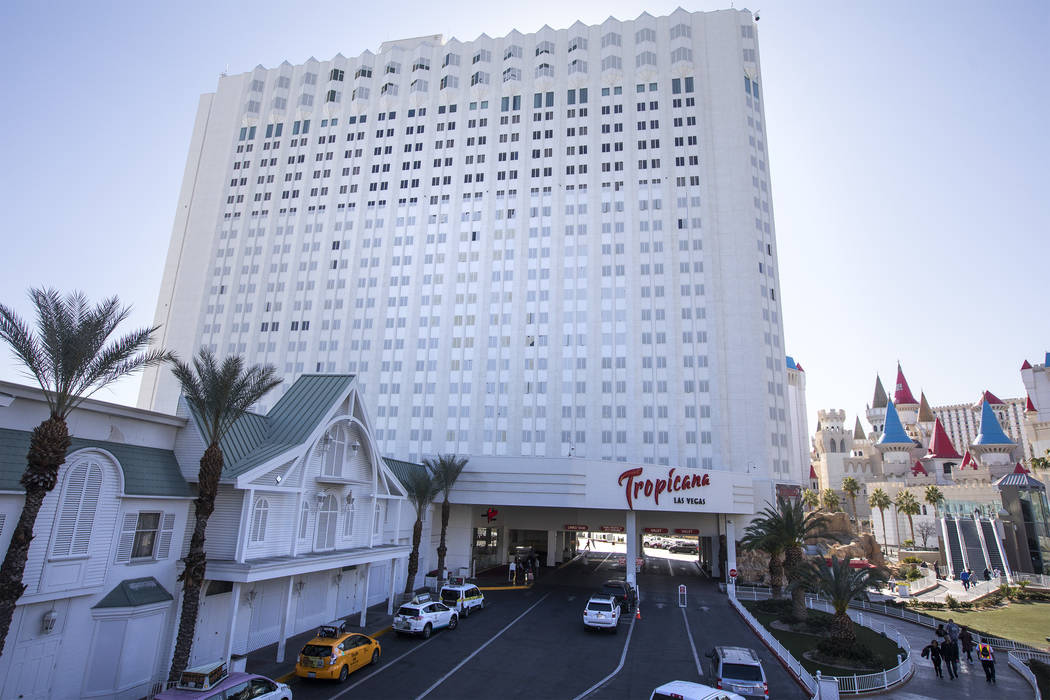 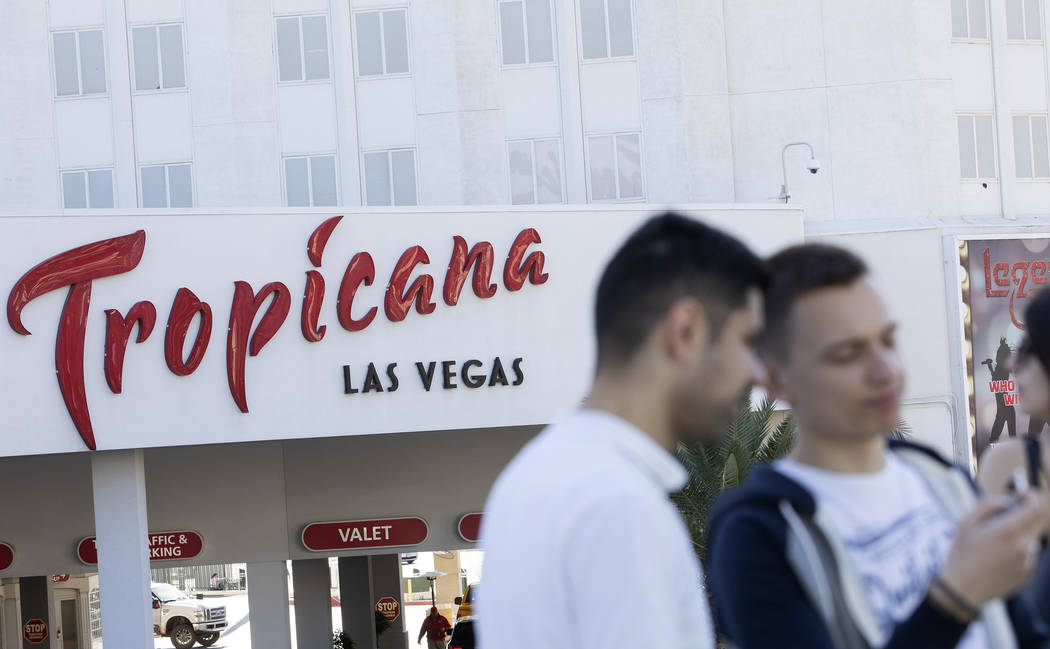 Tourists take photos outside of Tropicana on the Strip on Wednesday, Feb. 19, 2020, in Las Vegas. Investors have contacted Tropicana's parent company about buying the resort. (Ellen Schmidt/Las Vegas Review-Journal) @ellenkschmidt_ 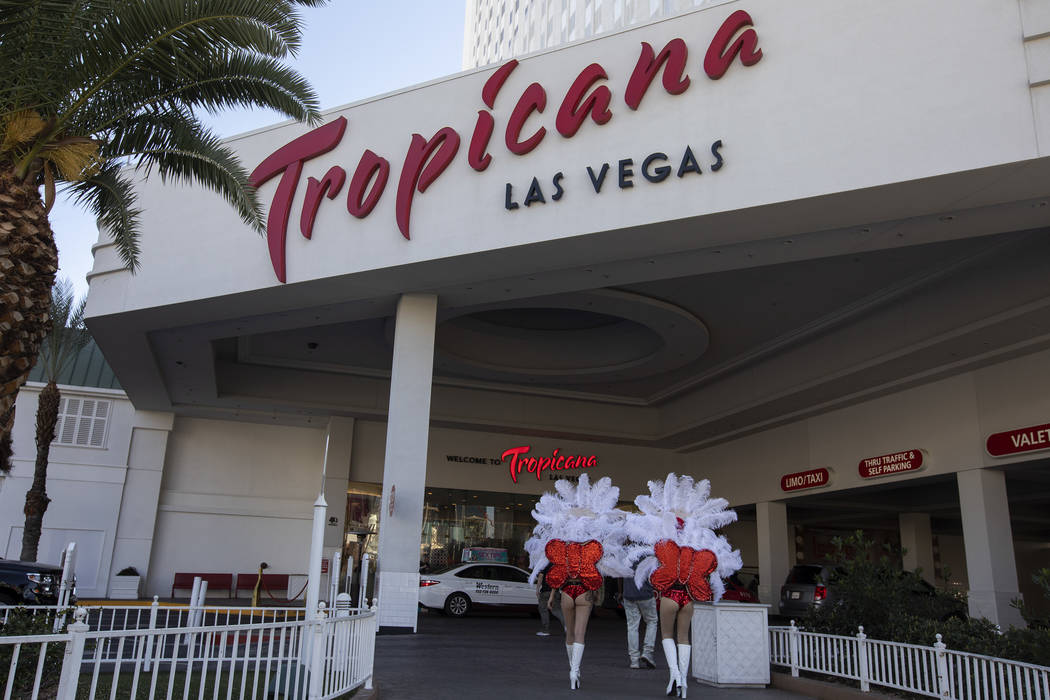 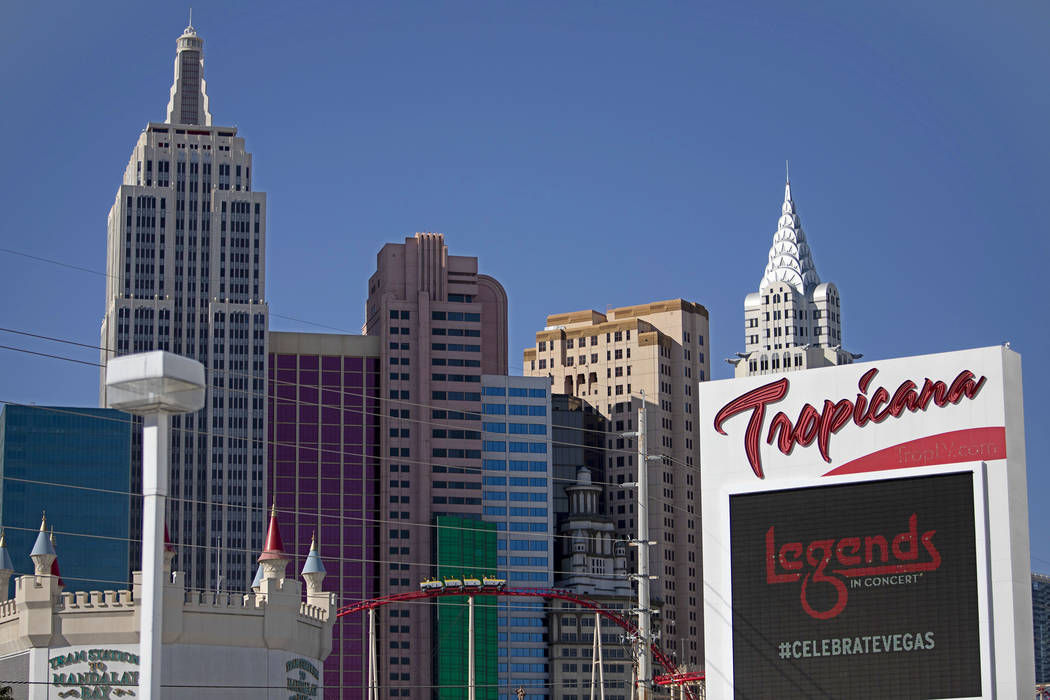 A Tropicana sign is seen in front of New York New York on the Strip on Wednesday, Feb. 19, 2020, in Las Vegas. Investors have contacted Tropicana's parent company about buying the resort. (Ellen Schmidt/Las Vegas Review-Journal) @ellenkschmidt_

When the Tropicana opened in the spring of 1957, it received gushing reviews.

“The Trop hits the top in this fabled gambling city,” the Las Vegas Review-Journal declared, calling the hotel “palatial” and “fantastically beautiful” and billed to be “famous the day it opened.”

Jay Snowden, president and CEO of Tropicana owner Penn National Gaming, told analysts during an earnings call Feb. 6 that there has been plenty of “unsolicited interest” in the 35-acre hotel-casino.

It wasn’t the first time in recent months that Snowden said buyers were eyeing the Tropicana, and it’s not clear whether the suitors want to buy the resort outright or purchase its real estate and lease it back to the Pennsylvania-based company.

But the talks come on the heels of several lucrative sales the past few years that have seen investors shell out billions of dollars for hotels on or near the Strip.

New York financial giant The Blackstone Group bought the Bellagio from MGM Resorts International for about $4.2 billion in cash this past fall. In a joint venture with MGM’s real estate investment trust, Blackstone also recently acquired MGM Grand and Mandalay Bay in a $4.6 billion deal.

Blackstone acquired the properties’ real estate and leased them back to MGM, which still operates the megaresorts.

Among other recent deals, Treasure Island owner Phil Ruffin bought Circus Circus and adjacent land for $825 million from MGM, and New York developer Eric Birnbaum acquired the Rio for $516.3 million from Caesars Entertainment Corp., which leased it back and will operate the resort for at least two years.

Joe Jaffoni, an investor-relations representative for Penn, said there are “no further updates or details” on a possible sale of the Tropicana.

The burst of hotel deals comes amid high visitor levels and no major resort openings on the Strip for nearly a decade — meaning no new competition lately.

Thousands of new rooms are in the pipeline, but the last newly built megaresort to debut on the famed casino corridor was The Cosmopolitan of Las Vegas in late 2010.

From mobsters to money problems

The Tropicana, which boasts 1,470 rooms, opened with 300. It featured tennis and badminton courts and a putting green, and the owners insisted gambling would be “secondary,” thus violating “all Las Vegas rules for parting the customer with his money,” a report said before it opened.

Its backers included “Dandy” Phil Kastel, who had run illegal gambling operations in New Orleans and was an associate of mobster Frank Costello. After Costello was shot and wounded in New York, police found a handwritten note on him that outlined more than $650,000 in casino take that “matched to the decimal point” the winnings at the recently opened Tropicana, casino historian David Schwartz of UNLV wrote in an article on the Mob Museum’s website.

Decades later, in 1983, one Joseph Agosto testified that he “maneuvered his way into control at the Tropicana” so he could skim money, putting a spotlight on the casino’s “infiltration by the Kansas City underworld,” The New York Times reported.

Decades after that, with the Strip firmly controlled by corporate interests, the Great Recession all but wiped out Las Vegas’ economy. The Tropicana was not spared the carnage.

Its former parent company filed for bankruptcy in 2008. After the hotel was sold in 2009, it was stuck in the red as the economy limped along, but it narrowed its losses.

We’ll find out soon enough whether someone buys the Tropicana. But given what it sold for last time, and what other hotels have been trading for, it’s a safe bet we would see another hefty payday on the Strip.