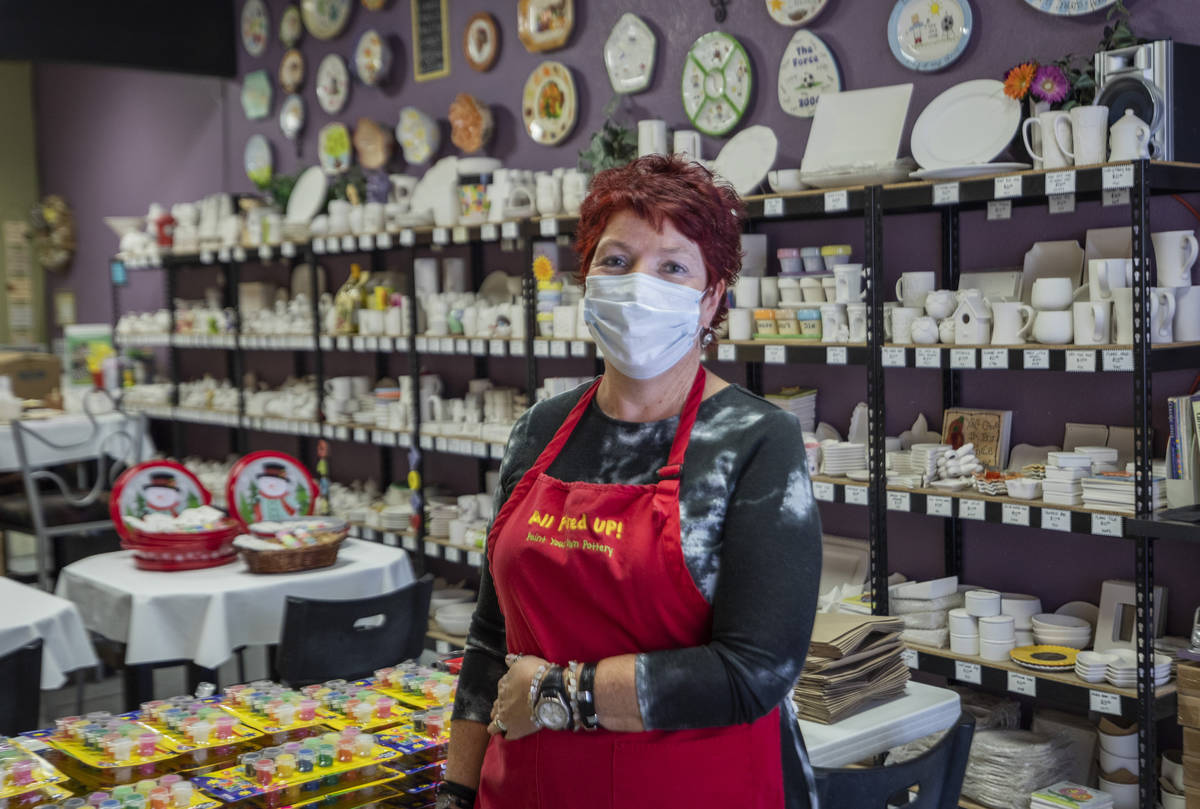 Co-founder of All Fired Up Gail Schomisch is seen in the paint-your-own pottery studio, on Tuesday, Nov. 24, 2020, in Las Vegas. (Elizabeth Page Brumley/Las Vegas Review-Journal) @Elipagephoto 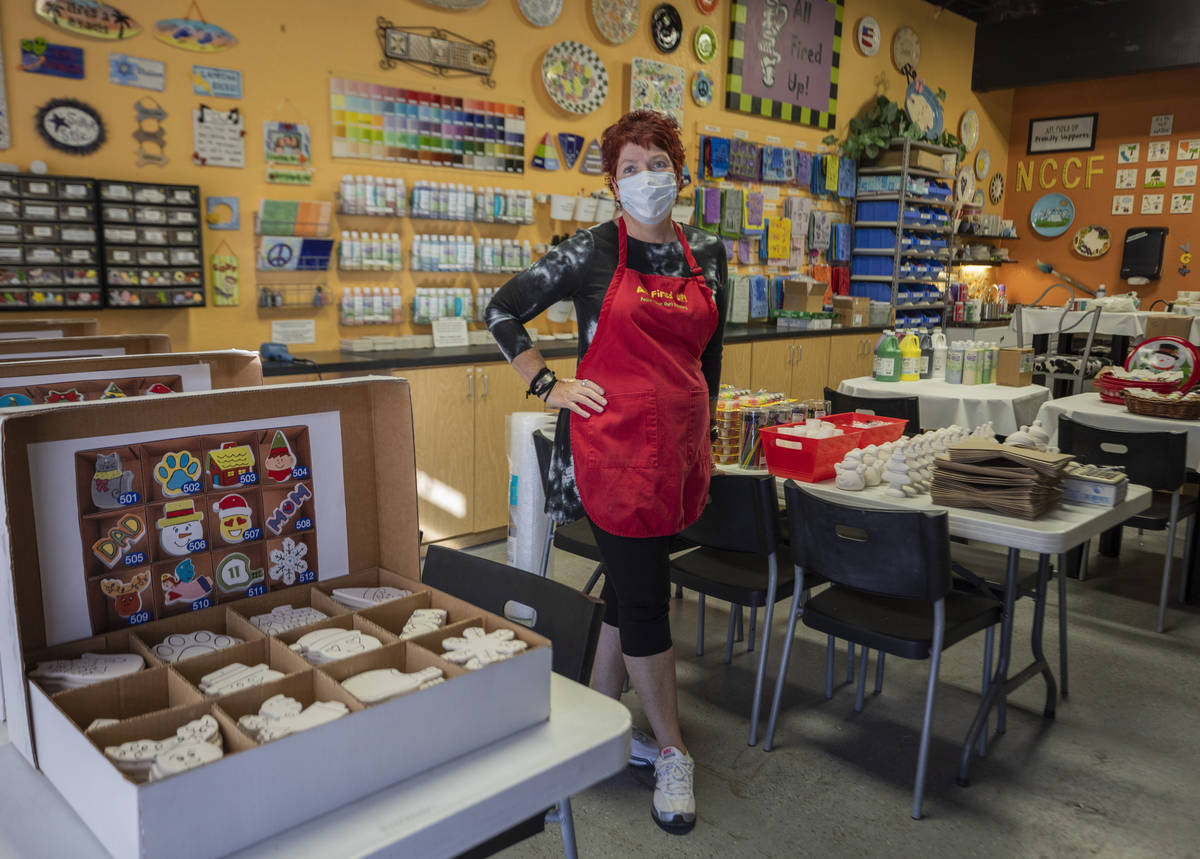 Co-founder of All Fired Up Gail Schomisch is seen in the paint-your-own pottery studio, on Tuesday, Nov. 24, 2020, in Las Vegas. (Elizabeth Page Brumley/Las Vegas Review-Journal) @Elipagephoto

Nevada small businesses will soon have another opportunity to apply for a forgivable Paycheck Protection Program loan.

The next round comes at a crucial time for small businesses like All Fired Up, a paint-your-own pottery studio in Las Vegas, which exhausted PPP funding months ago and has seen sales suffer as the state reimposed restrictions amid a surge of COVID-19 cases.

“We will most likely have to apply, we have no other choice,” said co-owner Gail Schomisch. “We’re also extremely nervous about that because we have already taken one PPP loan, but if we want to keep our doors open, we will have to take another one.”

Banking leaders across the state said their companies are well-prepared to handle the next wave of PPP applications after two previous rounds in 2020. President Donald Trump signed a $900 billion COVID-19 stimulus package in late December.

The U.S Small Business Administration will initially accept only applications submitted by community financial institutions, or CFIs, lenders whose customers are minority-owned and economically disadvantaged businesses.

The $659 billion loan program created last March under the federal relief package known as the CARES Act brought two installments of PPP funding in 2020 after the $349 billion first round exhausted in less than two weeks. More than $4.1 billion in PPP funds went to Nevada businesses, according to the Nevada Bankers Association.

The new federal stimulus package signed into law by Trump on Dec. 27 will provide more than $284 billion for forgivable PPP loans.

Companies will have 24 weeks from the date they receive a loan to use the money. While 60% of the proceeds must be used for payroll in order for loans to be forgiven, companies can use the rest for employee health benefits, mortgage interest, rent, utilities and expenses that are essential to business operations.

Schomisch said that the next round of PPP funds will help her events business stay afloat. She saw a 90 percent sales reduction in 2020 compared to the previous year.

“Until events are allowed, I can’t function. I’m an events company. There are no events,” she said. “We’re all waiting for conventions to come back to Las Vegas. I’m waiting for schools to open to have big family fun nights. I’m waiting for churches to be able to have their church hall with 150 to 200 people in it all painting pottery for a big fundraiser.”

Randi Thompson, Nevada director of the National Federation of Independent Business, said the next round of PPP funding will be critical for hard-hit industries like bar and food operators “who are being forced to operate at 25 percent.”

“While this funding will help keep some staff employed, there are still thousands of service workers who can’t get back to work,” Thompson said, “so PPP funding is only part of the picture. Unemployment is sadly the only hope for these workers, and the state has failed so many of them.”

Prepared for next PPP wave

Banking leaders across the Silver State said they’ll be prepared when the SBA rolls out guidance for the “second draw.”

The Nevada Bankers Association said the new package will include “business-friendly inclusions” like the one-page simplified forgiveness process for PPP loans under $150,000.

Phyllis Gurgevich, president and CEO of the association, said the PPP will allow a second draw of funds for small businesses with 300 or fewer employees that have seen a 25 percent drop in revenue during and quarter of last year compared to the same quarter of 2019.

“Businesses may benefit from gathering anticipated documentation and talking with their banker confirming the bank will be participating in round two,” said Gurgevich.

Nevada State Bank president and CEO Terry Shirey told the Review-Journal that the bank is in constant communication with its borrowers.

“The lending in the first wave of PPP in 2020 was unprecedented, and we managed the tsunami of requests as best we could,” said Shirey, adding that the bank “will do all that we can to ensure we are even better prepared for this next wave of funding, knowing that so many businesses are in need of the support to get through this final phase of the pandemic and back on the road to economic recovery.”

Other lenders, like credit unions, said they expect the same type of demand similar to the first round of PPP funding that was exhausted. But they’ll be better prepared this time around.

“We’ve actually had time to look at the first round of PPP with the extension and take stock of things with an after-action review,” said Jeremy Gilpin, executive vice president of Greater Commercial Lending, a wholly-owned subsidiary of the Greater Nevada Credit Union.. “We looked at what went right and what we could have done better and we’ve had time to address those, including our software to ensure a smoother transition.”

Gilpin said there’s better communication with the SBA this time around.