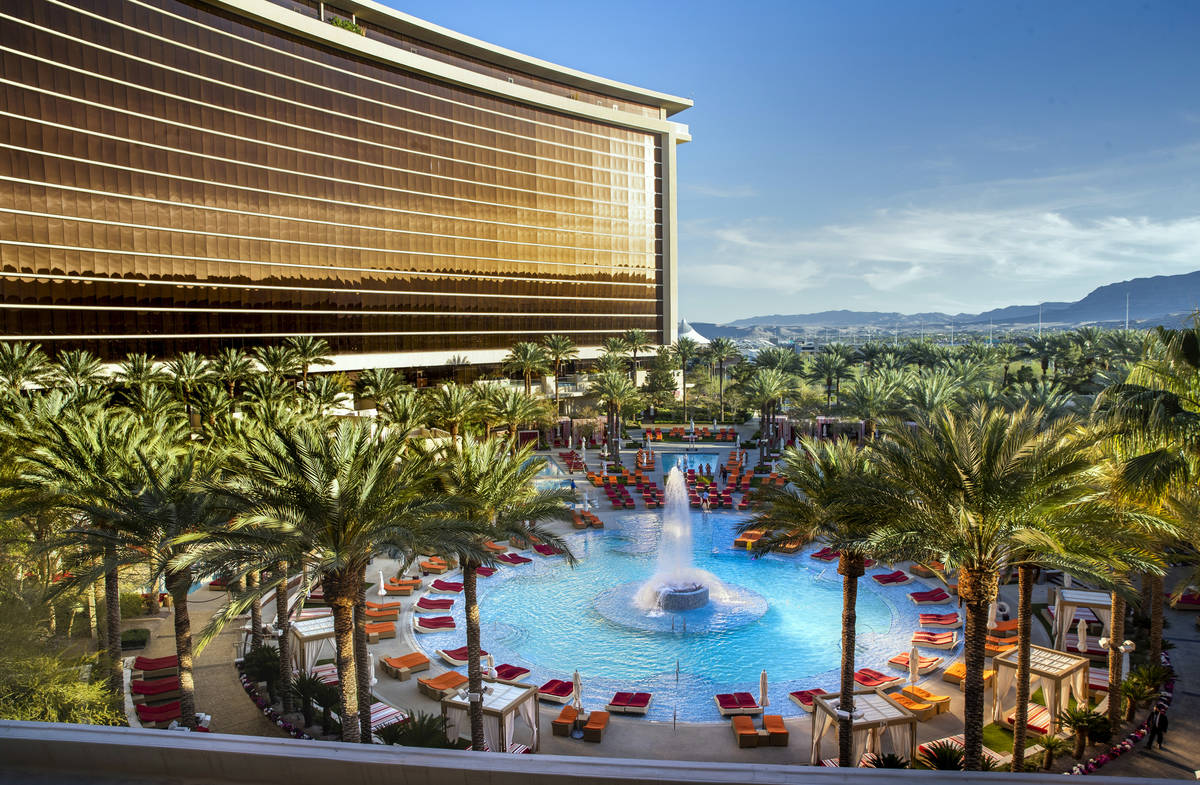 Take a dip in the pool at Red Rock Resort and then enjoy a Mega Dole Whip Sundae. (L.E. Baskow/Las Vegas Review-Journal) @Left_Eye_Images 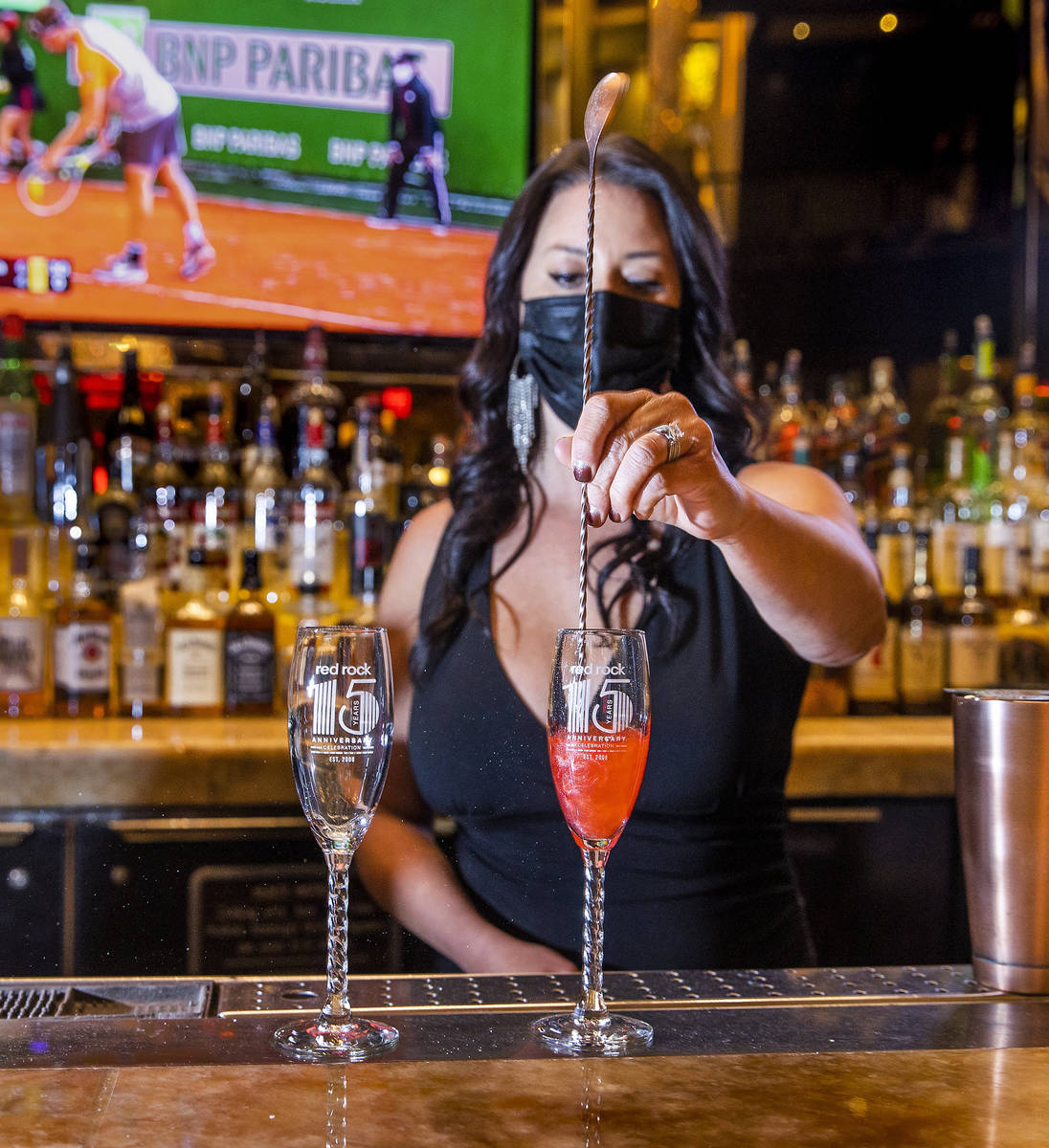 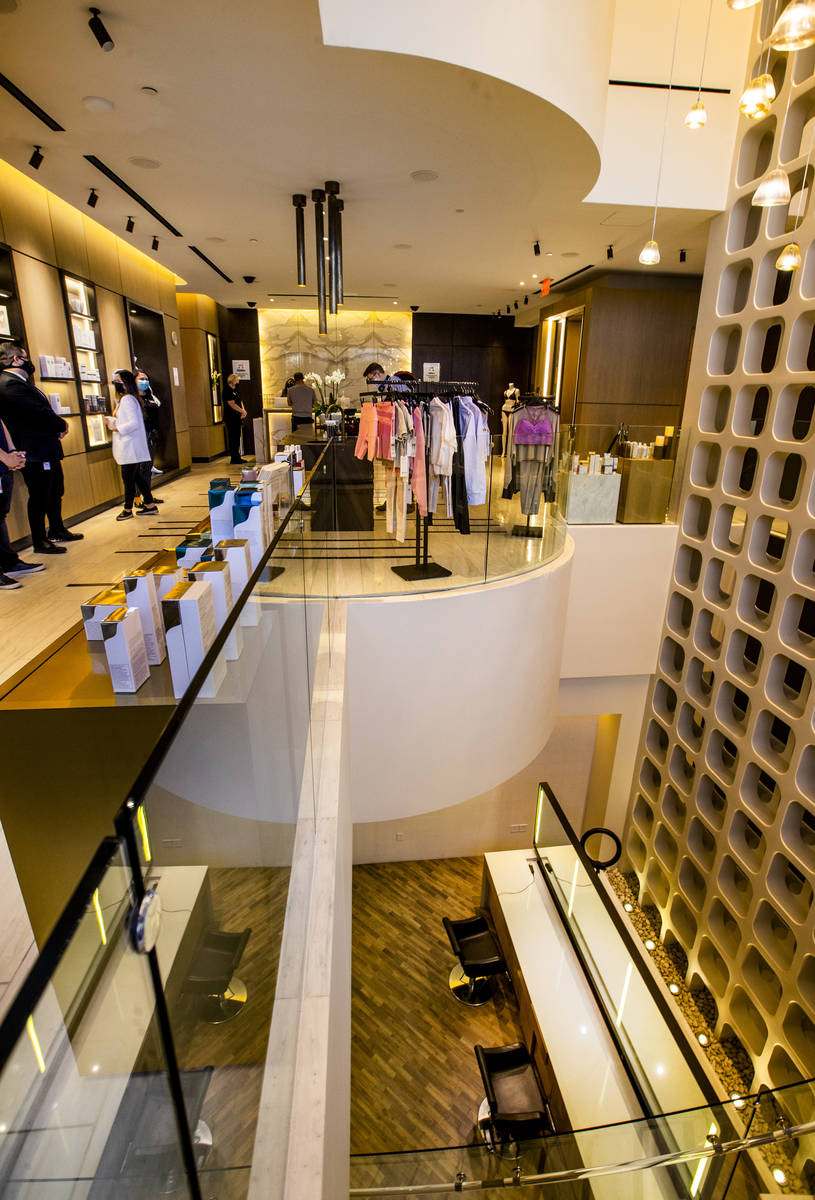 The entry to the spa at Red Rock Resort, which currently is offering locals 20 percent off all spa treatments and 10 percent off all nail services. (L.E. Baskow/Las Vegas Review-Journal) @Left_Eye_Images 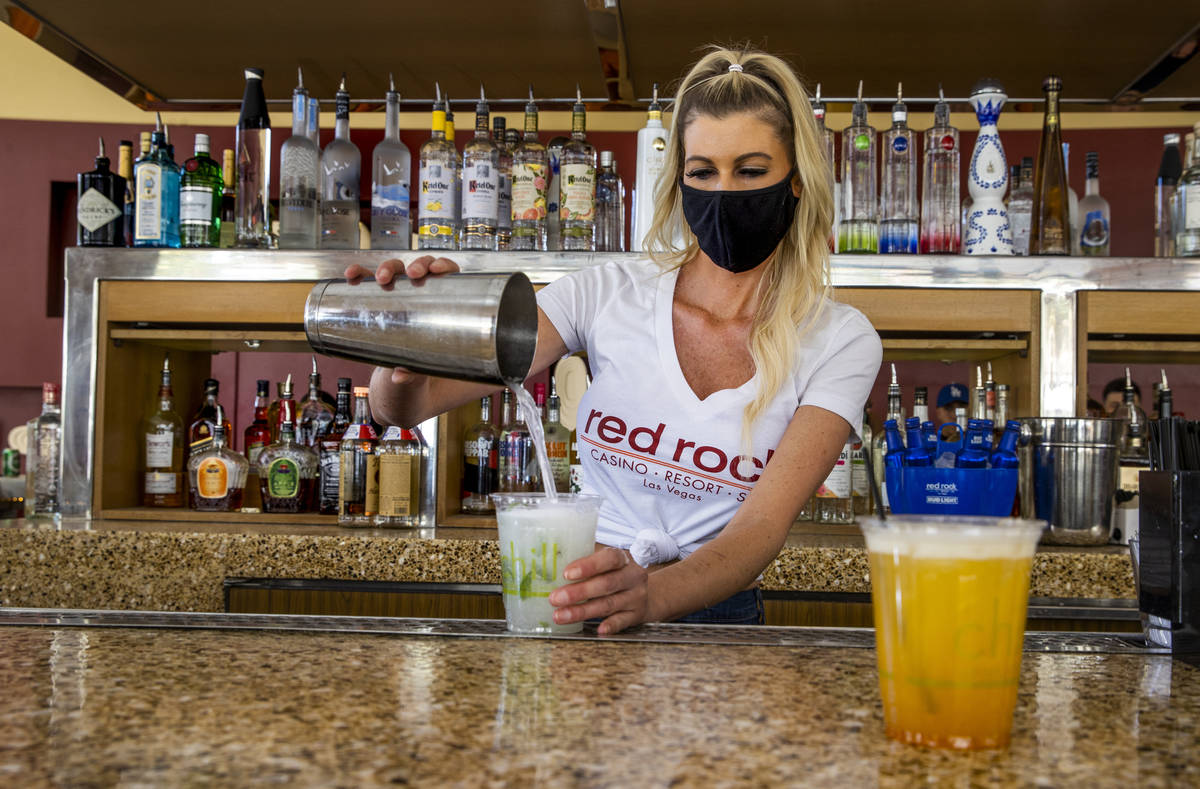 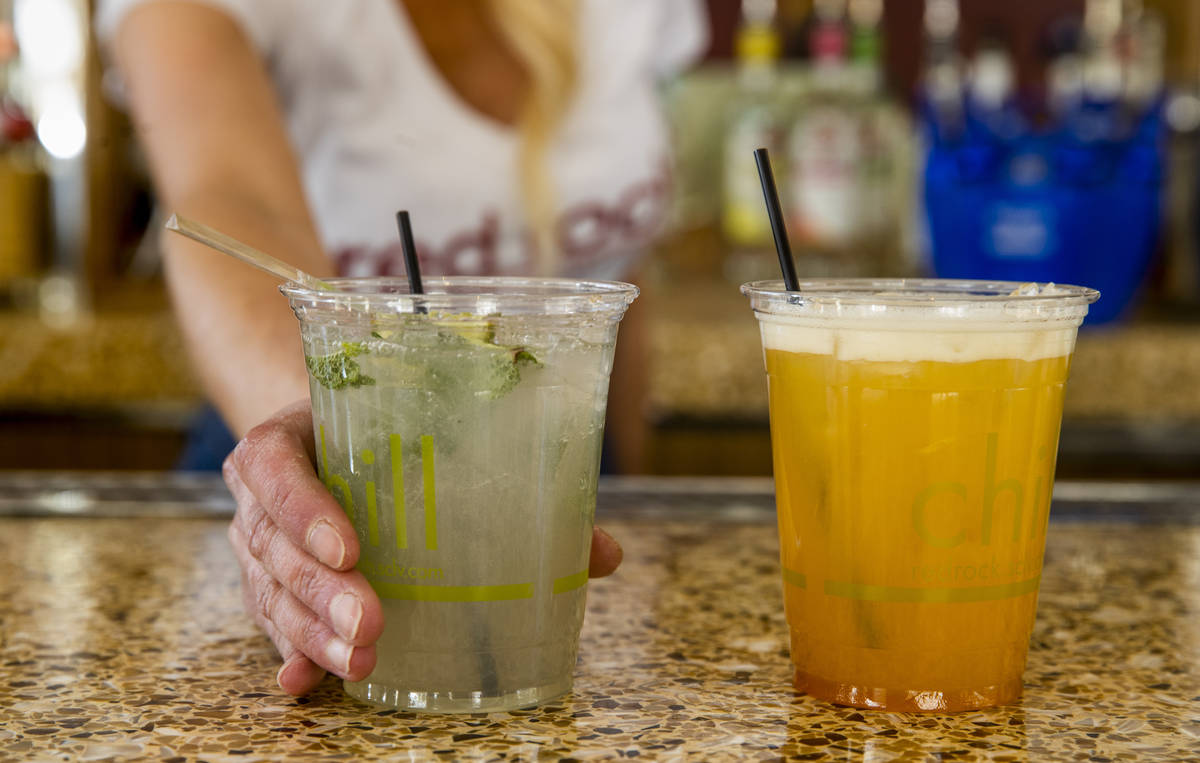 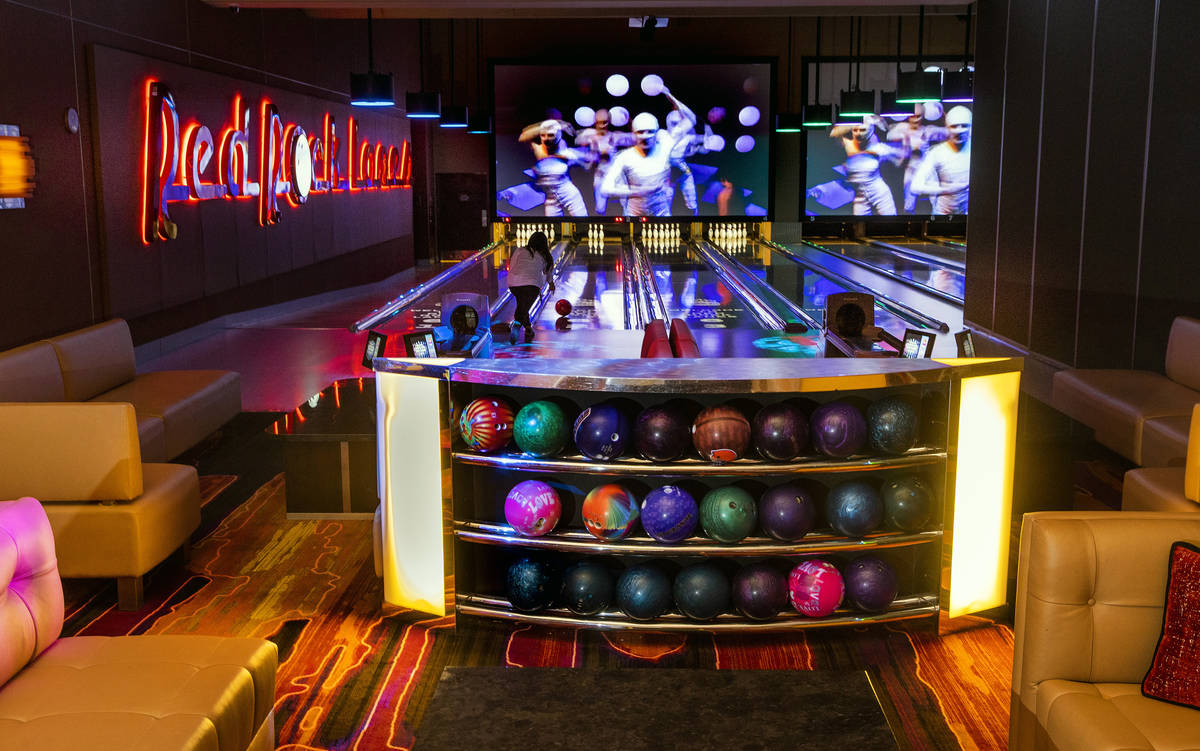 Red Rock Lanes has private VIP luxury suites that provide 4, 8 or 12 lanes of bowling, along with catering, a private bar and your own audio and video programming. (L.E. Baskow/Las Vegas Review-Journal) @Left_Eye_Images 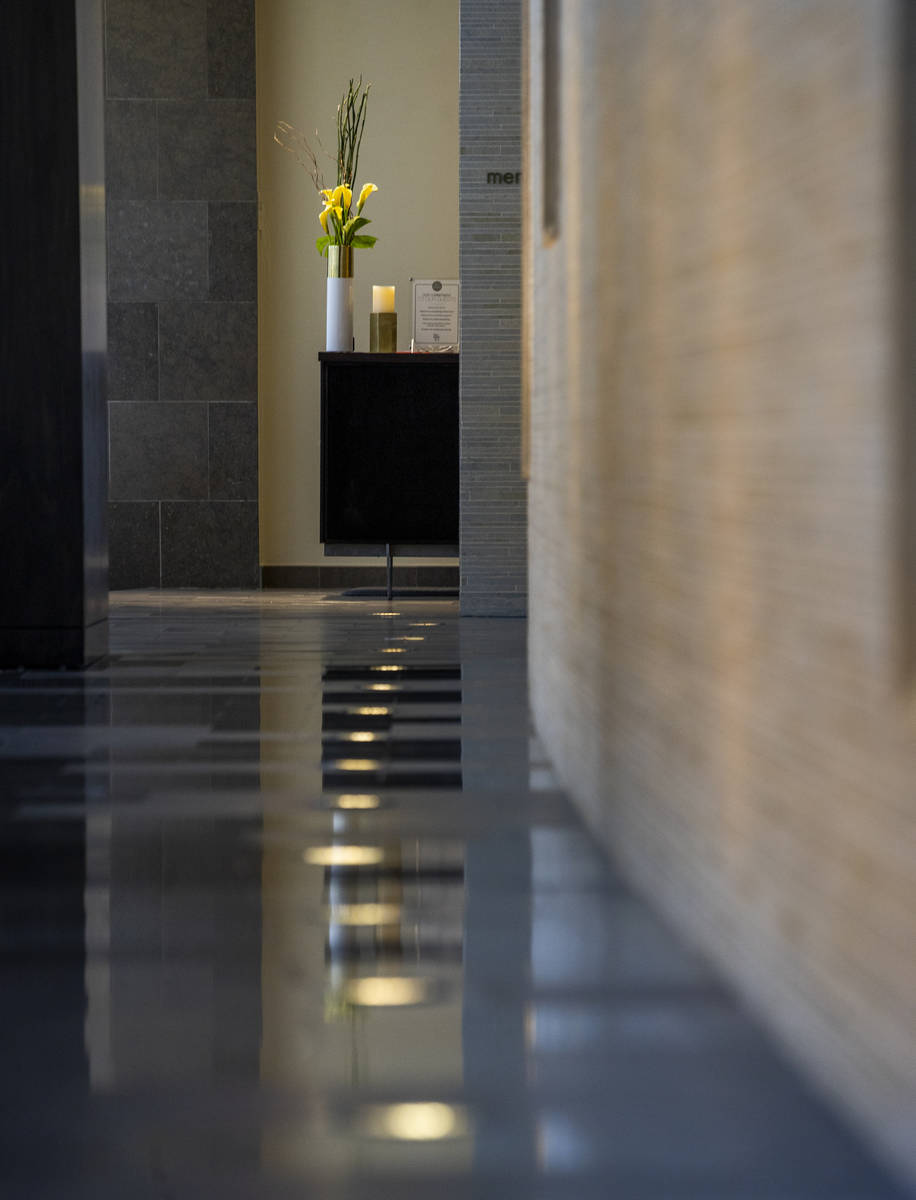 The hallway to the Spa by Well & Being at Red Rock Resort. (L.E. Baskow/Las Vegas Review-Journal) @Left_Eye_Images

Red Rock Resort turns 15 years old on Sunday, and Station Casinos is celebrating with a month of anniversary promotions. Yet even without those special events and offers, there are plenty of things to do there that many of us may have forgotten over the years — if we ever knew about them. So here are 15 things to do at Red Rock if you stop in for the birthday celebration.

Lend an ear, sip a cocktail

Red Rock Resort’s hotel lobby is so far removed from the casino floor that many people forget about the plush red carpeted lounge nestled at the foot of two winding staircases, beneath a Swarovski crystal chandelier. It’s a great place to sip a cocktail or fine spirit, particularly after 6 p.m. on Fridays and Saturdays, when you can enjoy music from the house piano player.

The property’s ultralounge Crimson currently is decked out with a floral garden motif as part of its second seasonal pop-up, crimson in Bloom. While there are plenty of tempting cocktails available, don’t miss the Moet & Chandon vending machine, where you can purchase 187-milliliter bottles of Moet & Chandon Brut Imperial or Rosé with special $25 tokens that benefit the Public Education Foundation.

Try your luck at bingo

Electronic cards that track your numbers for you may be easier, but we still prefer marking up paper cards with those cool little ink dabbers. (Or is it daubers?) Fortunately, the Red Rock Bingo room offers both options for all of its games, including those with progressive jackpots.

Ben & Jerry’s Scoop Shop in the food court offers flavors that can’t be found in your local grocery store. Enjoy them in sundaes, shakes or a choice of cone during a break from bingo or other activities, rather than spooning it out of a carton at home in front of the TV.

Red Rock Lanes offers 72 lanes of bowling from 9 a.m. to midnight on weekdays, and weekends until 2 a.m., with the trippy Cosmic Bowling light show kicking in at 4 p.m. Mondays through Fridays, and 2 p.m. on Saturdays and Sundays. Or splurge on the private VIP luxury suites, which offer four, eight or 12 lanes of bowling, along with catering, a private bar and your own audio and video programming.

Bluff for a big pot

While tournament play remains suspended, the resort’s poker room is still open around the clock for cash games. The most popular right now are $1-$2 and $2-$5 No Limit Texas Hold ’em and $3-$6 and $4-$8 Limit Texas Hold ’em, as well as some Omaha 8 or Better.

Have a dip and a Dole Whip

While pool admission for guests not staying at the resort is available for $25 when occupancy levels permit, the best way to guarantee a space without a room key is to book a cabana (starting at $150) or a daybed (starting at $100). If you decide to take the plunge, be sure to splurge on a Mega Dole Whip Sundae: mango and strawberry Dole Whip, topped with fruit, chocolate syrup and whipped cream, served in a carved-out half pineapple.

Shoot a game of 8 ball

The bar area of Red Rock Lanes offers electronic dart boards and two pool tables. While you pay by the game for the former, the latter are priced at $16 an hour, prorated by the minute.

While nearly all of the resort’s restaurants offer outdoor seating, none is quite as inviting as the T-Bones Chophouse patio, overlooking the resort’s pool deck. The entire menu is available at either private tables, or on the round banquettes surrounding a large fountain that doubles as a fire pit.

Spruce up with a spa day

Red Rock is currently offering locals 20 percent off all spa treatments and 10 percent off all nail services, seven days a week, which includes access to the private spa pool as well as the gym (the sauna, steam room and jacuzzi remain closed because of the pandemic). Day passes for the pool and gym (and other amenities, once they reopen) are available to locals every Monday through Thursday.

Why settle for one beer, when you can sample six? Yardhouse currently offers two beer flights: a collection of six Belgian brews, and a tasting of a half-dozen of the house beers. Or build your own flight of four.

Bet on the World Series

Baseball season has barely begun, but the sportsbook is already taking bets on who will win this year’s World Series (as well as next year’s Super Bowl, and plenty of other events). While all of those bets can be placed electronically through Station’s mobile sports betting app, paper tickets make great gifts for casual fans who don’t usually gamble on sports.

After showing off your skills at Skee-Ball, or any of the other games at the Cyberquest arcade, it’s time to hit the prize counter and redeem those tickets. Even a poor player probably will earn enough for some candy or a bouncy ball (five to 50 tickets), but you’ll probably have to return a few times if your heart is set on the Occulus virtual reality system (44,850 tickets).

The Bake Shop at Red Rock serves everything from cupcakes, tarts and miniature cheesecakes, to full-sized cakes. You can’t miss the always-changing assortment of sweets in display cases at the entrance to the Lucky Penny Cafe.

Rest up between adventures in one of the property’s rooms, which were renovated in January 2020. Station is waiving the resort fee for locals through the end of August. For those who want a room large enough to host a party, check out the penthouse suites on the private 20th floor, which range from 4,000 to 7,500 square feet and include butler service. redrockresort.com