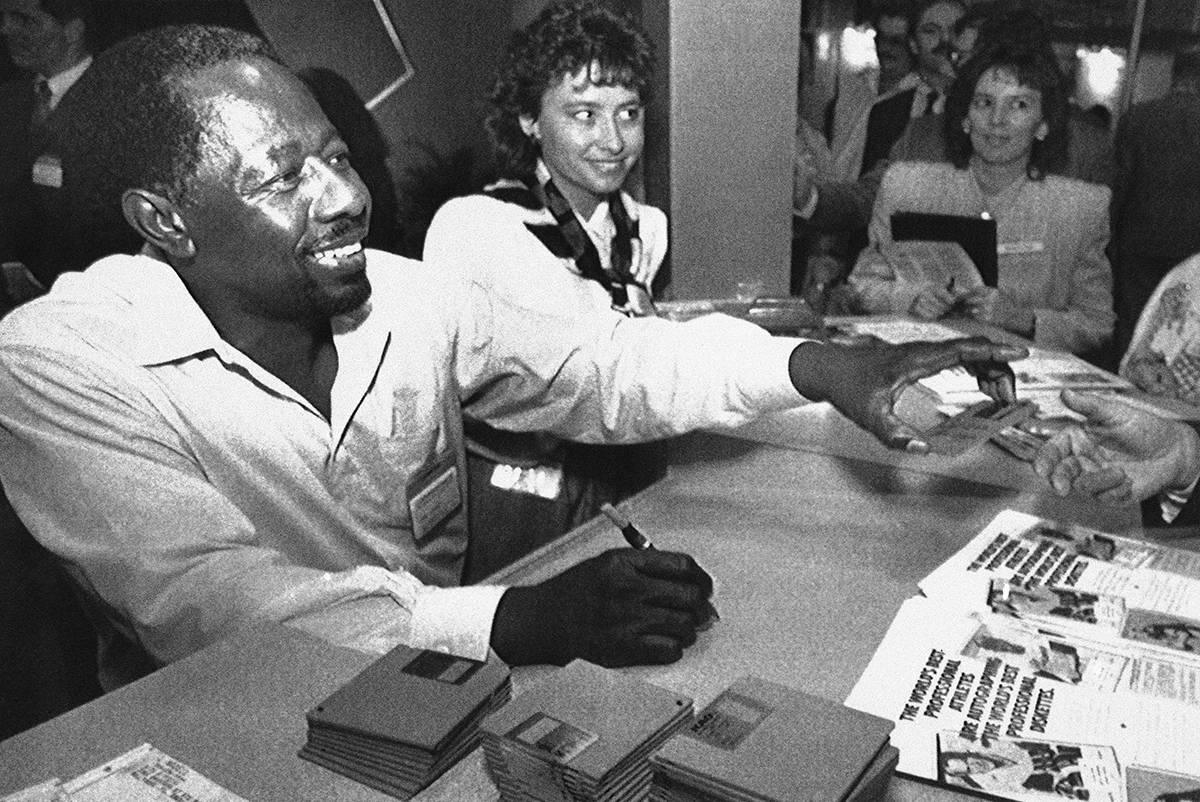 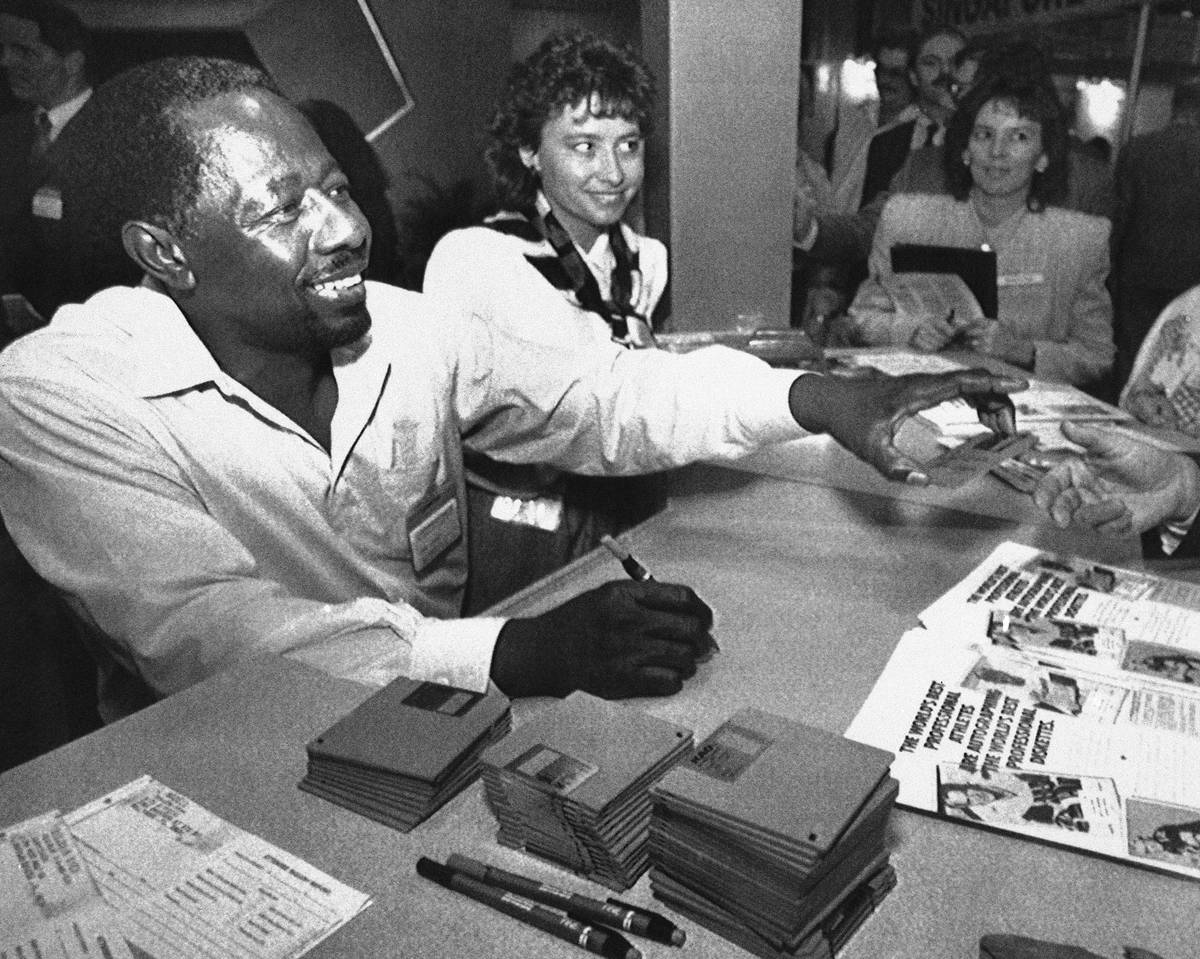 Former baseball great Henry Aaron signs autographs on computer disks at the Comdex convention in Las Vegas on Nov. 4, 1987. The show grew to attract more than 200,000 attendees at its height. (AP Photo/Jeff Scheid) 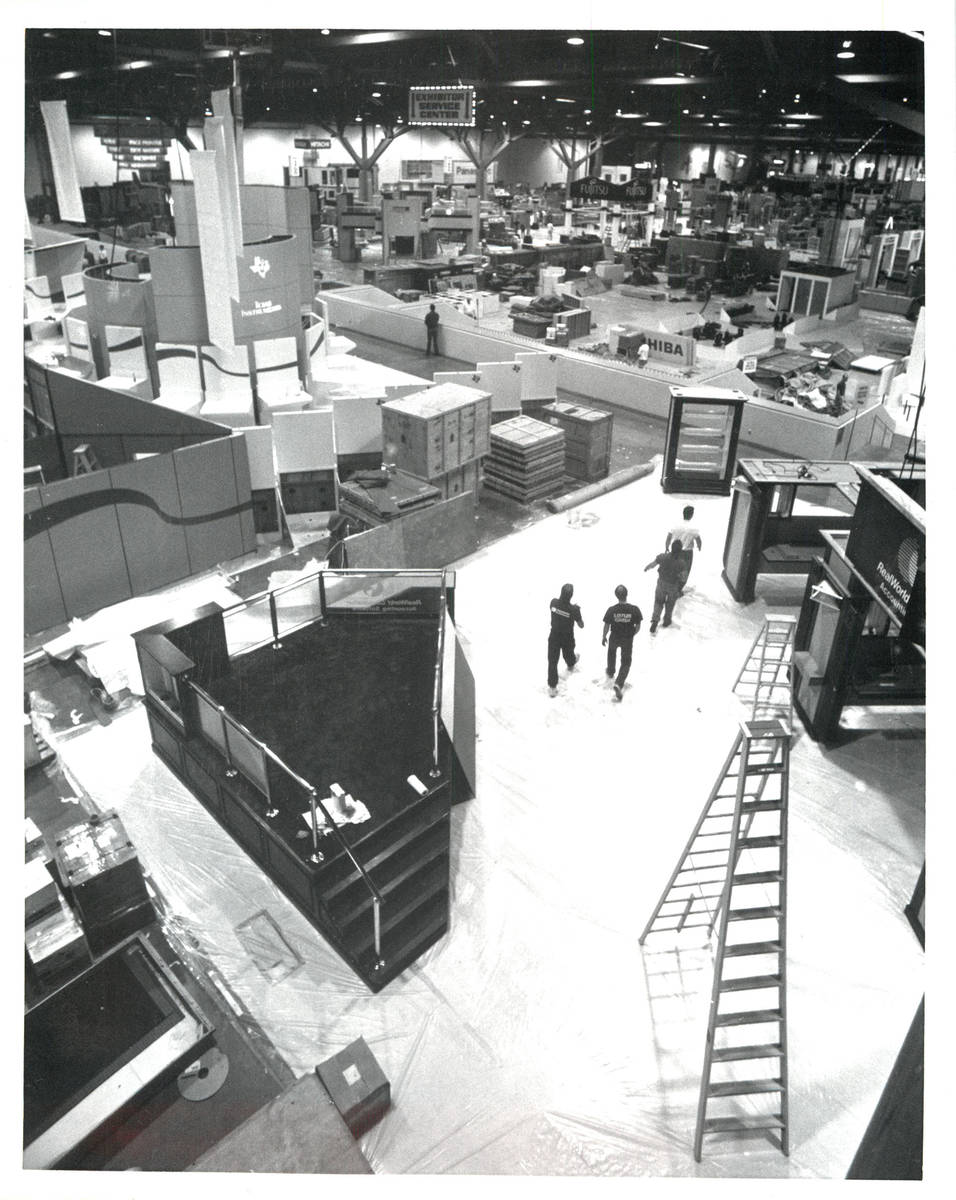 Preparations are made for the 1990 Comdex convention in Las Vegas. The computer trade show paved the way for Las Vegas' dominance of the convention industry. (Gary Thompson/Las Vegas Review-Journal)

Sheldon Adelson was best known as the chairman and CEO of Las Vegas Sands Corp., operator of The Venetian and Palazzo on the Strip. But it was the convention industry — specifically, the Comdex computer trade show — that helped Adelson reshape Las Vegas and become one of the world’s wealthiest men.

His visionary concept of attracting large-scale business events to luxurious resorts with plenty of dining and entertainment options paved the way for the city’s enduring dominance of the conference industry.

Before a shovel turned a single bit of ground for The Venetian, Adelson, who died Monday at age 87, and his partners saw an opportunity in the late 1970s to capitalize on the then-fledgling personal computer industry. The partners formed The Interface Group and organized the Computer Dealers Exposition, then shortened the name to Comdex.

Over time, the show’s popularity exploded, especially after Bill Gates and Microsoft embraced it. Gates became a regular Comdex keynote speaker, and the show became a November fixture on Las Vegas’ convention calendar and a precursor to CES, which is the leading consumer technology showcase in North America.

Comdex eventually became known as the show for programmers and techies, while the Consumer Electronics Show, staged about two months later each year, had a more diverse array of gadgets in multiple categories, including telecommunications and entertainment.

In the late 1980s, Comdex was opened to the general public, resulting in explosive growth in attendance. In its heyday, Comdex spread to multiple venues across Las Vegas and attendance soared to 225,000.

Meanwhile, Adelson and his partners in 1989 acquired the Sands Hotel, the famed hangout of Frank Sinatra and the Rat Pack. A year later, he and his partners opened the Sands Expo and Convention Center, at the time the only privately operated convention center in the United States. Since then, the industry has trended toward more private companies being contracted to manage public facilities.

Adelson had a theory on how to fill hotel rooms: Schedule conventions and trade shows in the middle of the week at nearby or attached exhibit halls and fill hotel rooms with show attendees, then make those rooms available to a category known as “free and independent travelers” — those who book rooms without connection to a convention or group — on weekends. Adelson reasoned that business travelers with expense accounts were used to paying top dollar for convention accommodations in cities with higher room rates, and Las Vegas never had much trouble filling rooms on weekends.

The Las Vegas Convention and Visitors Authority embraced the idea and invested in its existing convention facilities, setting the stage for a philosophical rift between Adelson and the LVCVA over the authority’s use of tax dollars to compete with private enterprise.

There were also skeptics in the community who argued that wooing conventioneers was unproductive because they would conduct business and wouldn’t gamble and spend as readily as independent travelers.

It turned out Adelson was right. LVCVA statistics show that in 1979 the city hosted 637,862 conventioneers. By the mid-1990s, when Comdex was flourishing, the total had risen to about 3 million. By 2019, with far more companies, including MGM Resorts International, focusing on conventions as a tourism component, the total rose to a record 6.6 million convention visitors — with attendees spending 18 percent more than leisure visitors per trip, on average, according to the LVCVA. Spending by visitors attending conventions directly supported 43,500 jobs, $2 billion in wages and economic output of $6.6 billion, the authority reported last year.

Las Vegas was on track to have its biggest convention year ever in 2020 before the coronavirus pandemic paralyzed the industry.

A division of The Interface Group and Comdex were sold to the SoftBank Corp. of Japan for $862 million in 1995, giving Adelson a stake to build a new resort — The Venetian — which he dreamed up after visiting Venice with his wife, Miriam, on their honeymoon.

SoftBank sold the show to a Ziff Davis spinoff, Key3Media, which eventually went into bankruptcy. Interest in the show began to wane in the late 1990s as some of the big participants — Apple, IBM and Compaq — opted to stage their own corporate events to introduce products.

The last Comdex drew around 40,000 people and 500 exhibitors in 2003. But by then, The Venetian had opened and was packing its hotel suites and adjacent convention center.