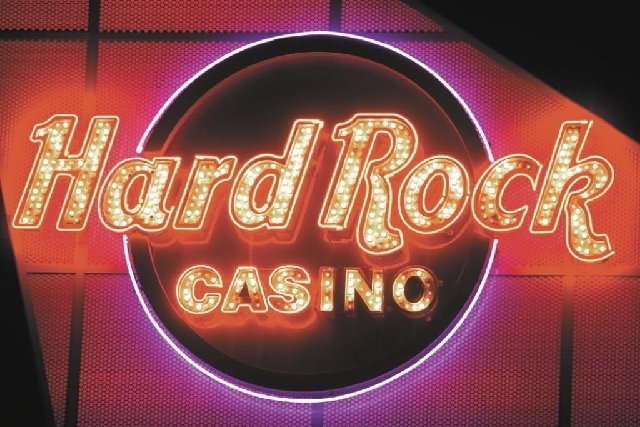 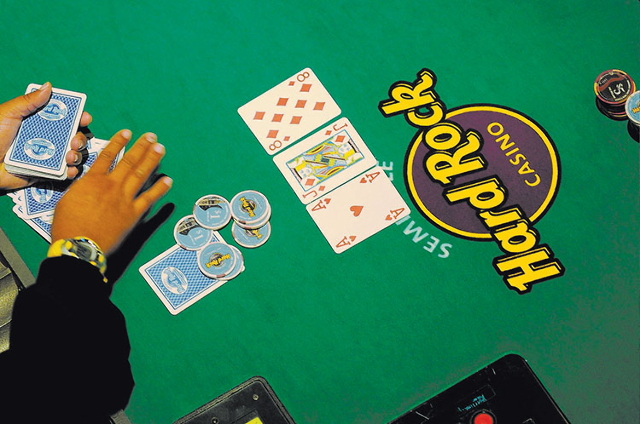 FRIDAY FEBRUARY 3, 2012 HOLLYWOOD, FL - A dealer deals for poker players play in the poker room at the Seminole Hard Rock Hotel and Casino in Hollywood, Fl. (Josh Ritchie/Special to the Las Vegas Review-Journal)

A gambler claims Hard Rock Hotel employees illegally detained him and stole about $3,600 in casino chips last month after they noticed him counting cards at a blackjack table.

“Hard Rock has not contacted the Nevada Gaming Board relative to the dispute and has effectively stolen plaintiff’s $3,625,” according to the lawsuit.

Representatives of the resort declined to comment on the matter.

Card counting is not illegal in Nevada, but gamblers who use the technique may be asked to leave the casino. Actor Ben Affleck has said he was banned from playing blackjack at the Hard Rock after he was caught counting cards there in April 2014.

According to Kho’s lawsuit, he was at the Hard Rock the weekend of Aug. 22-23 and was card counting at blackjack when he saw that he was being watched. He decided to leave and approached the casino cage to cash his chips, but personnel at the cage requested his identification.

Kho “was not legally required to provide identification, desired to maintain his privacy and anonymity, and refused the request while requesting that the chips be cashed,” according to his complaint.

“It is critical for persons in the plaintiff’s position … to maintain their anonymity concerning casinos because casinos broadcast this information on networks for others to use to the detriment of legal gamblers such as the plaintiff,” the document states.

Security personnel then approached Kho and demanded his identification, according to the lawsuit, but he refused and told them he wanted to leave.

The lawsuit claims the security personnel “audaciously and without authority informed the plaintiff that, because the casino is private property, plaintiff did not have the ability to leave until he complied with defendant’s demands for identification.”

Kho then was handcuffed on the casino floor in front of numerous other patrons, according to the complaint, and was taken to a security office against his will. The lawsuit claims the resort had a duty at that point to notify the Nevada Gaming Control Board about the dispute.

According to the document, the resort had the “ulterior purpose” of gaining private information about Kho to share with third parties.

The lawsuit claims Kho suffered physical injuries “in the form of contusions and abrasions,” as well as emotional distress and “destruction of his vacation to Las Vegas.”

Causes of action in the case include theft, false imprisonment and battery. The lawsuit also claims the Hard Rock defamed Kho by communicating to those viewing the casino interaction that he was a criminal.

“Plaintiff is not, and was not, a criminal,” the document states.

Kho is seeking actual damages of more than $10,000, punitive damages and attorney’s fees.

According to the lawsuit, Pistor was at Siena’s casino on Aug. 18, 2014, after being offered a complimentary three-night stay and $600 in free slot play.

The lawsuit claims the resort recognized Pistor as an gambler and sought to punish him “for this legal activity which he had practiced in the past at Siena.”

While waiting to check in at the hotel, according to the complaint, Pistor was approached by two security officers who demanded that he show his identification to them. Pistor refused and tried to leave, according to the document, but the officers “physically attacked him” and placed him in handcuffs.

The lawsuit claims the officers then took Pistor to a separate room “where he was held against his will and without his consent.”

Causes of action in the case include false imprisonment, defamation and battery.

Pistor and two other gamblers also have a civil rights lawsuit pending in U.S. District Court in Arizona against several tribal officers. Nersesian represents the plaintiffs.

The case stems from an Oct. 25, 2011, incident in which the gamblers were detained at the Mazatzal Hotel and Casino, which is owned and operated by the Tonto Apache Tribe on tribal land in Payson, Ariz.

In June, a panel of the 9th U.S. Circuit Court of Appeals in San Francisco allowed the case to proceed. The panel, which included Judge Johnnie Rawlinson of Las Vegas, ruled that the defendants were not entitled to tribal sovereign immunity because they were sued in their individual, rather than their official, capacities.