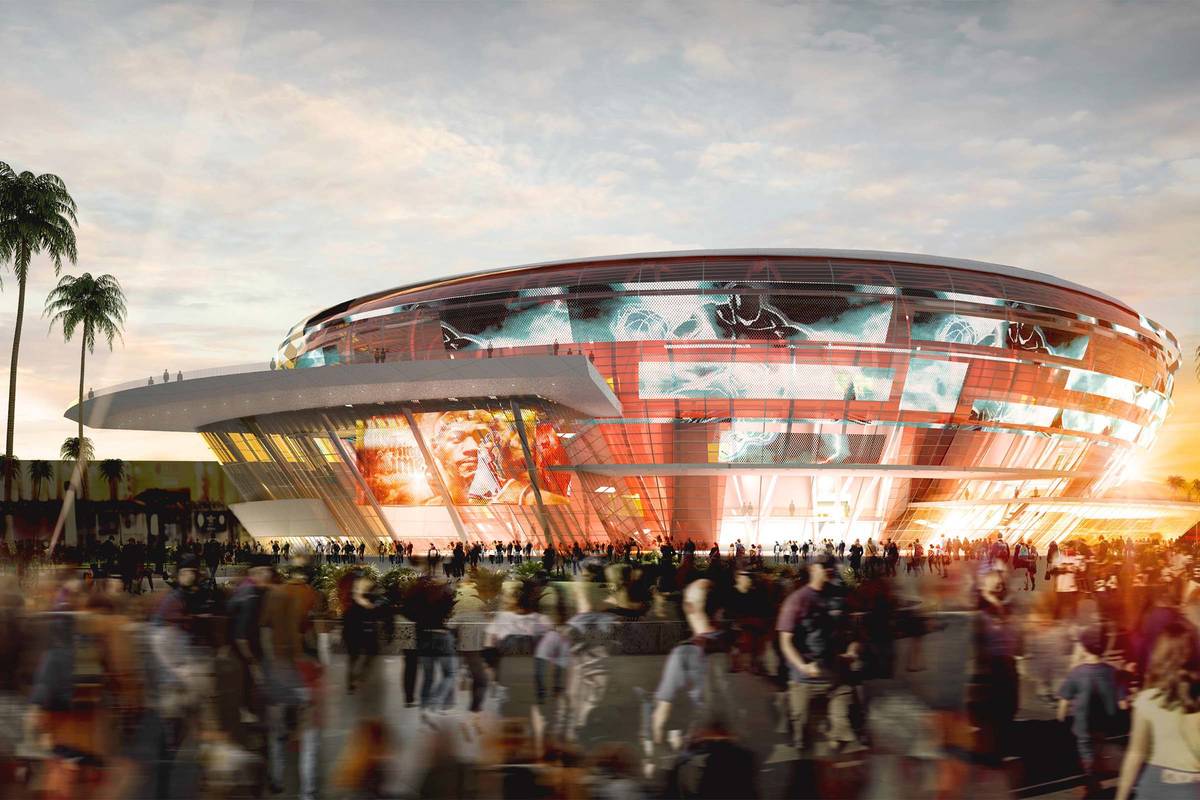 A rendering released in late October, 2014, depicts an arena that is under construction near the SLS, which is at the north end of the Las Vegas Strip. (Courtesy, Brett Ewing/Cuningham Group)

The board granted the project, led by former NBA and UNLV basketball player Jackie Robinson, a six-month extension to complete multiple agreements for the project during its zoning meeting.

If those agreements and bonding are not completed by March 6, the land use agreement for the parcel will expire.

Also, construction on the project must begin within two years.

“It’s time to fish or cut bait here,” Commissioner Tick Segerblom said. “The north end of the Strip is really a golden opportunity; it’s really going to be hot in the future. If you can’t do this, let’s open this up so someone else can come in and take advantage of that property. I will reiterate … this is the last six months.”

Plans call for a 23,000-seat arena where it’s hoped an NBA team would play, 44-story and 63-story nongaming hotels, retail and conference space, a bowling alley and movie theater on the 27-acre site, the former home of the Wet ‘n Wild water park.

Plans for the project were rolled out in late 2013, but a hole dug into the large open space between the Sahara and The Drew hotel project is the only visible sign of progress.

During the intervening time, T-Mobile Arena was constructed and has hosted three seasons of Golden Knights NHL games, other sporting events and large acts.

“We fully understand and appreciate the fact there have been delays on occasion in regards to this project,” Kemper said. “Some of those delays have been occasioned by circumstances and events outside of our control. There are others that are of our own doing.”

Working toward getting started

Despite the delays on the project, Kemper insists those involved have been working diligently toward getting it going.

Kemper said Robinson paid over $60,000 last week to the engineering firm Kimley-Horn to work with Clark County to finalize the traffic and drainage studies tied to the project.

“In fact, the first of several meetings with public works is set for tomorrow,” Kemper said.

Also, the developers are securing of a bond for the project with Viking Bond Service Inc., Kemper said.

Andrew Diss, vice president of governmental affairs for the Sahara, requested March 6 as the final deadline for whether the project moves forward.

“We just ask that (date) to be the definite deadline,” Diss said in the meeting. “We don’t want to see continual approvals of this every six months, every year. It really puts a chilling effect on that parcel of land if there are other serious developers that are willing to come in and develop it. … It was given permission to move forward in 2014, and here we are in 2020 and no significant work has gone on.”