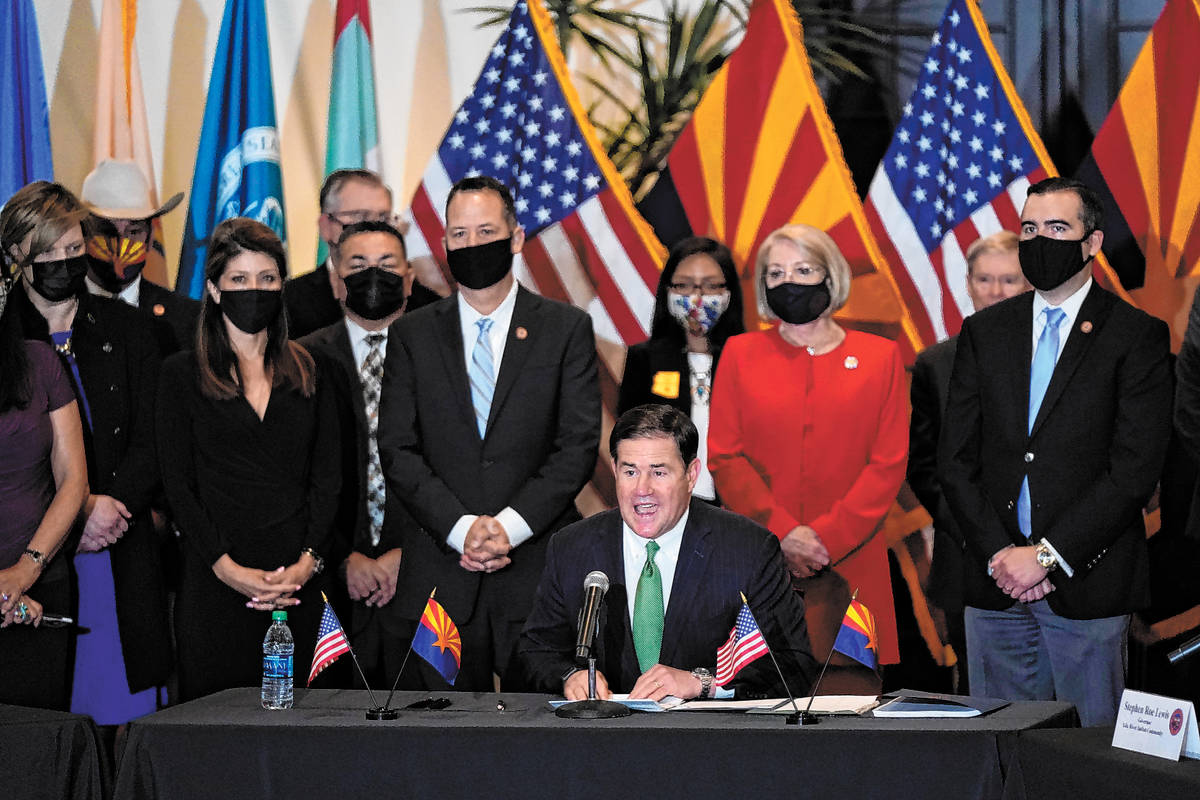 Surrounded by Arizona legislators, Republican Arizona Gov. Doug Ducey speaks at a bill signing allowing a major expansion of sports betting in Arizona at an event at the Heard Museum Thursday, April 15, 2021, in Phoenix. The measure approved by the Legislature adds additional types of table games at tribal casinos and for the first time allows sports betting under licenses issued to tribes and pro sports teams. (AP Photo/Ross D. Franklin)

A northern Arizona Indian tribe, one that last week wasn’t awarded a license to conduct sports betting in the state by the Arizona Department of Gaming, has filed a lawsuit seeking to block the state’s Sept. 9 startup of wagering.

The Yavapai-Prescott Indian Tribe on Thursday filed the lawsuit in Maricopa County Superior Court against Arizona Gov. Doug Ducey and Ted Vogt, director of the Arizona Department of Gaming, asking for an injunction to stop the issuance of licenses to 10 Arizona Indian tribes and eight professional sports franchises and venues.

An emergency hearing is scheduled for Friday in Phoenix.

Last Friday, the Department of Gaming announced the 18 sports-betting licenses, adding that the marketing of sportsbooks and the startup of fantasy sports games could begin Saturday with event betting beginning Sept. 9, the day the 2021 NFL season kicks off.

Citing a policy of not commenting on pending lawsuits, representatives of the Department of Gaming on Monday declined to talk about the lawsuit.

But a legal expert said he doesn’t expect the tribe to succeed in stopping the state’s sports-betting startup.

Daniel Wallach, the co-founder of the Conduct Detrimental podcast on sports legal issues and a gaming and sports-betting attorney, said the Yavapai-Prescott tribe’s argument isn’t likely to sway a judge.

The tribe contends that Indian tribes have the exclusive right to operate gaming under federal law through compacts negotiated between the state and the tribes.

“The Yavapai-Prescott Indian Tribe contends that the new sports betting law, H.B. 2772 — which expands gambling beyond tribal borders and allows both tribes and non-tribal entities to operate sports wagering under state-issued licenses — violates the exclusivity granted to the (tribe) under Proposition 202 and its 2003 compact with the state of Arizona,” Wallach said.

Wallach said he doesn’t expect an injunction to be forthcoming because a remedial provision in the law made it “crystal clear” that the tribe and Arizona voters understood that Proposition 202 left open the possibility of changes in state law that would expand gambling to include nontribal entities at locations outside tribal lands.

The provision also enables the tribe to reduce its revenue-sharing payments to the state to 0.75 percent of its net win from the previous quarter. Tribes currently pay between 1 percent and 8 percent of net win, depending on volume.