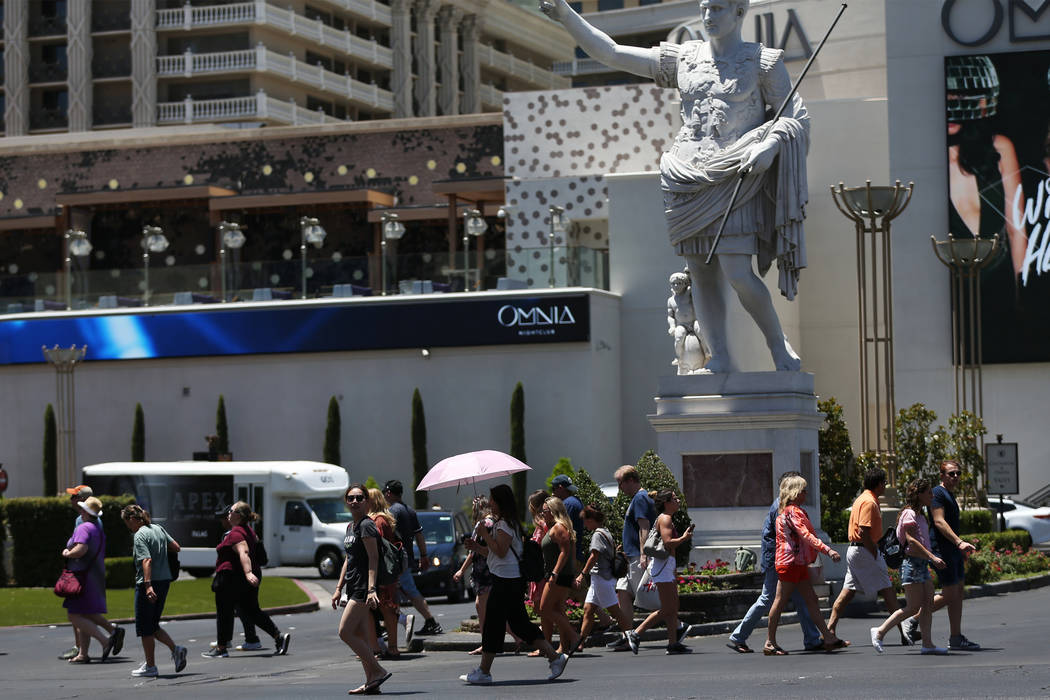 “These teams provide valuable additional security capabilities, provide a stronger and more visible security presence and a rapid armed response if necessary to our Las Vegas properties,” Jennifer Forkish, vice president for corporate communications, said in a statement to the Las Vegas Review-Journal.

Las Vegas casinos are strengthening their security programs after a gunman, holed up in his Mandalay Bay suite, killed 58 concertgoers on Oct. 1, 2017, raising questions about safety on one of the country’s busiest thoroughfares. The Las Vegas Strip attracts more than 42 million tourists a year and is the heart of the state’s economy.

MGM Resorts International, which owns Mandalay Bay, has hired at least nine former military and SWAT officers for its rapid response teams, according to a study of LinkedIn profiles.

Caesars is the second-largest operator in Las Vegas after MGM Resorts, with nine properties containing more than 23,000 rooms. MGM operates more than 40,000 rooms.

The armed teams will be the first responders to any dangerous situation at or around the properties. Former Metropolitan Police Department detective Phil Ramos described the Caesars and MGM teams as “a civilian version of SWAT.”

The average duration of an active shooter event is just under 10 minutes, while it it takes on average 12 to 15 minutes for law enforcement to arrive, according to a report by ASIS International, a professional organization for security professionals.

Mac Segal, director of hotel and fixed site security consulting at Washington-based AS Solution, said MGM Resorts and Caesars were taking the right steps to improve their security.

Segal, who has trained workers in Las Vegas, said it is impossible to evacuate large-scale resorts like Paris Las Vegas or Bally’s quickly, so having a unit that can quickly stop the threat is vital.

“While prevention is better than a cure, if you get bitten by a snake, you want to have the antidote on hand,” he said.

Douglas Florence, former director of security at the Hard Rock Hotel, agreed the creation of the armed units is a “smart” move.

“Most brands in Vegas offer entertainment venues, nightclubs and conventions, which can have a vulnerability,” he said.

Florence said the Caesars security teams could cover one property or several properties located adjacent to one another, like The Linq Hotel, Flamingo and Bally’s.

Segal and Florence said creating armed units should be just one element of a security program. Education for all employees is essential to an effective security strategy, they said. Housekeepers and greeters need to be trained to recognize and report unusual behavior or items.

Hospitality professionals have said security measures like installing metal detectors or checking bags could turn away guests. Michael McCall, professor of hospitality at Michigan State University, said the armed teams should not impact the guest experience if they are mainly covert.

“Customers want safety but likely do not want it in their face,” he said.

Caesars is hiring Security Saturation Team supervisors, managers and officers, according to LinkedIn. The company did not say how many people it plans to hire for the units.

The resort operator is seeking supervisors with least seven years of law enforcement or military experience, while applicants for manager and officer positions should have five years.

The job requirements include “documented experience in use of force decision making in an armed public facing capacity,” according to the LinkedIn post.

Segall said Caesars wants to make sure any armed hire can “keep cool and not overreact” in the case of a threat. “There are huge liability issues if a guest gets injured.”