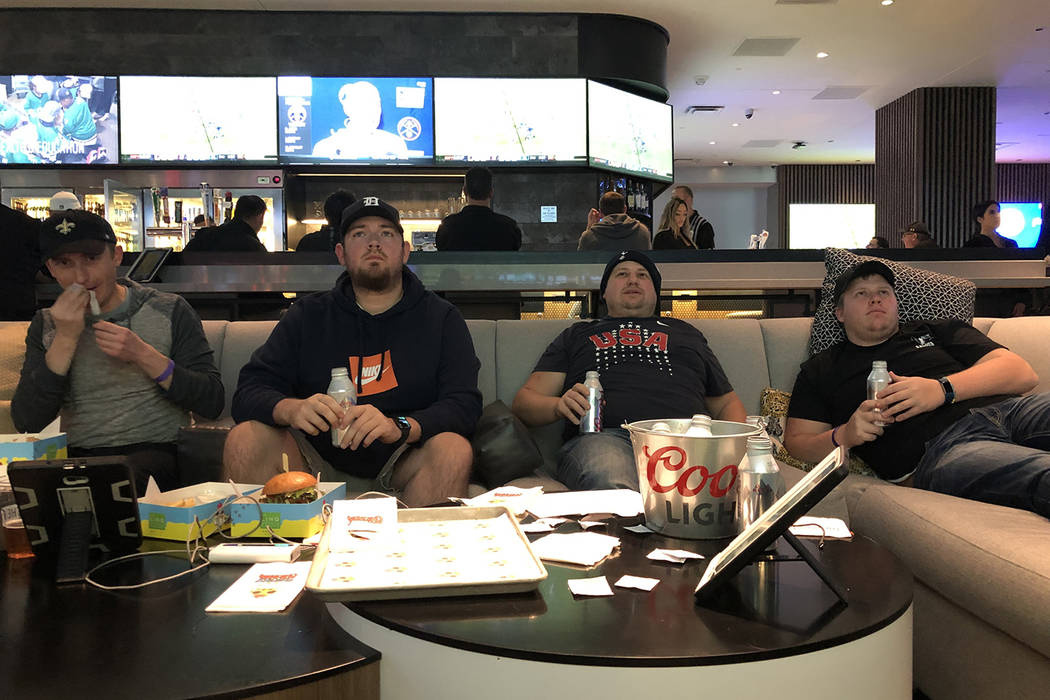 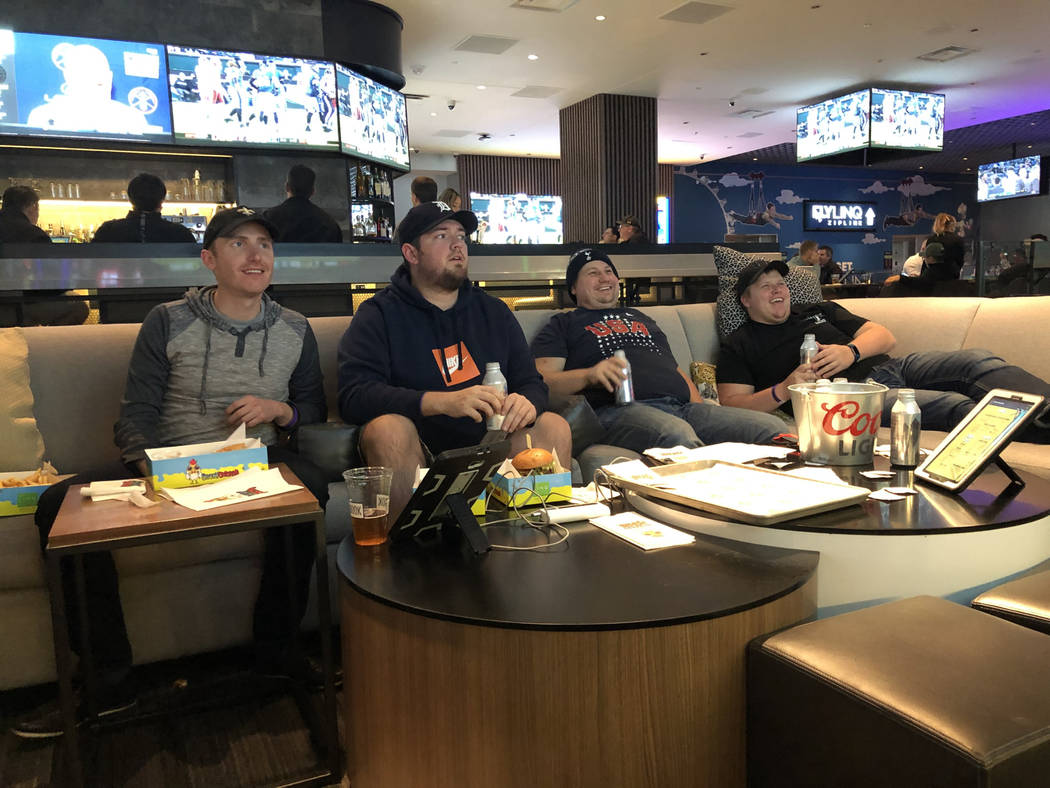 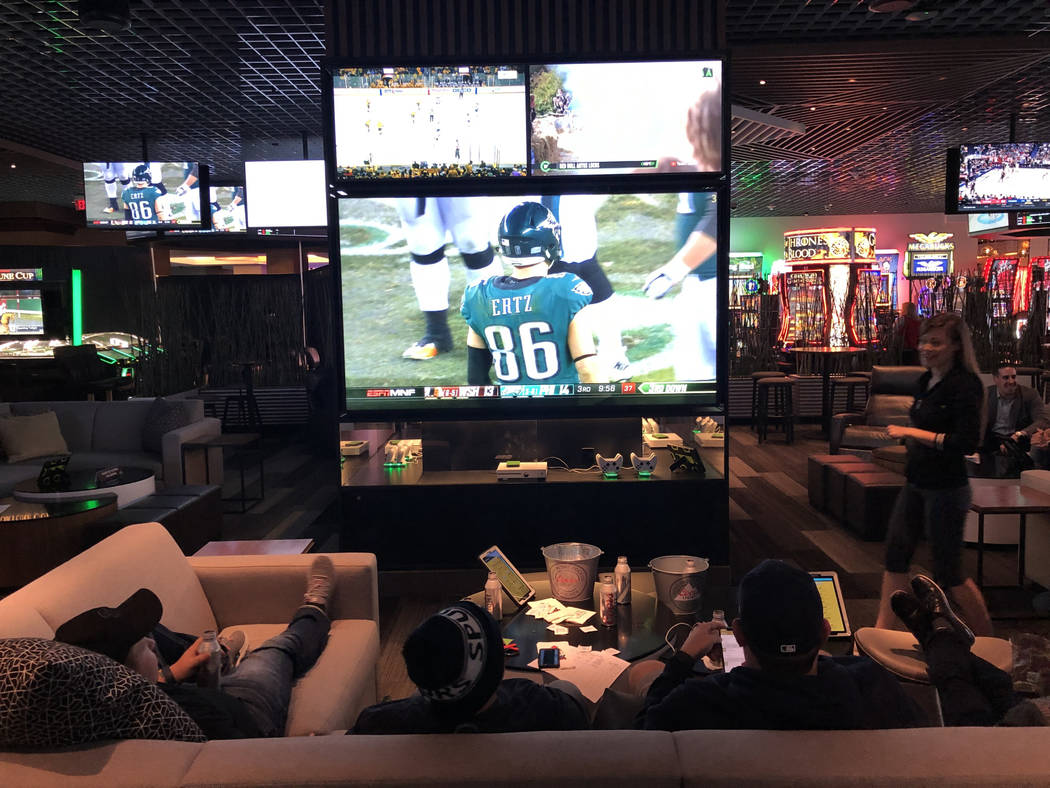 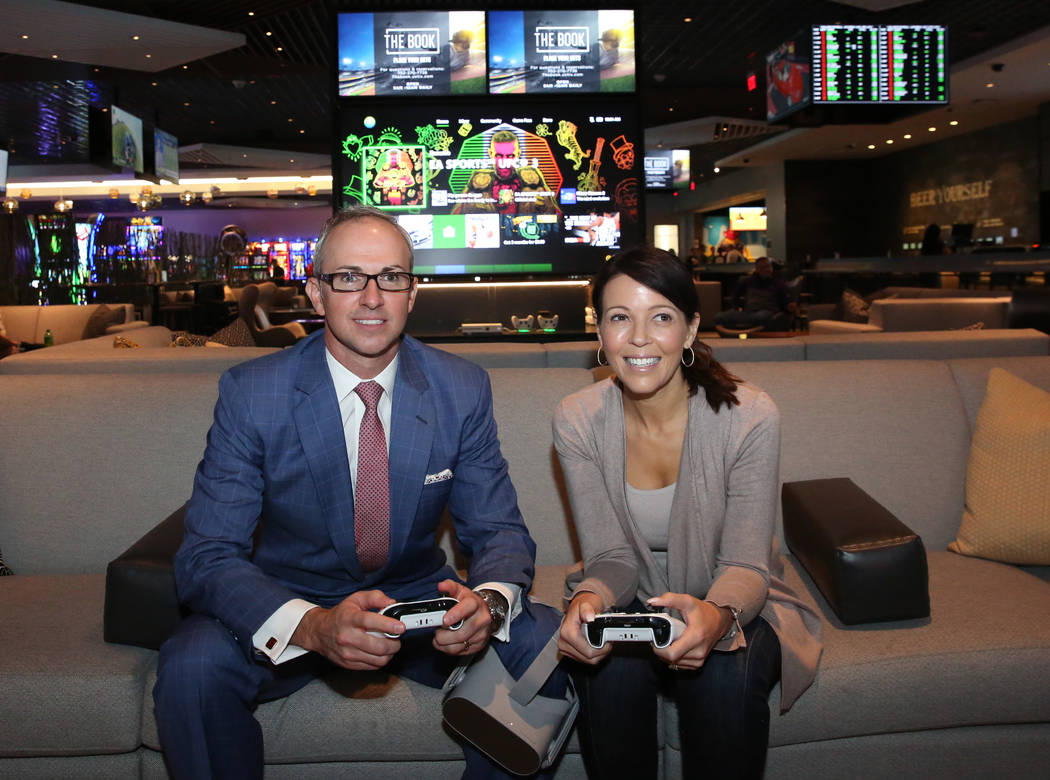 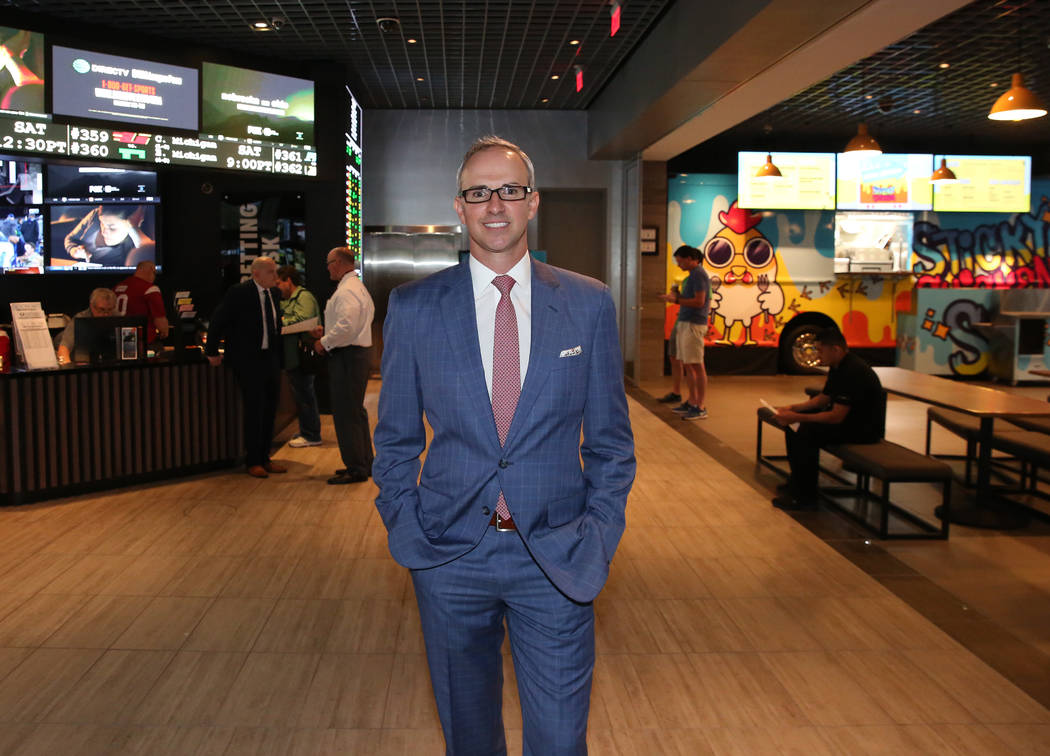 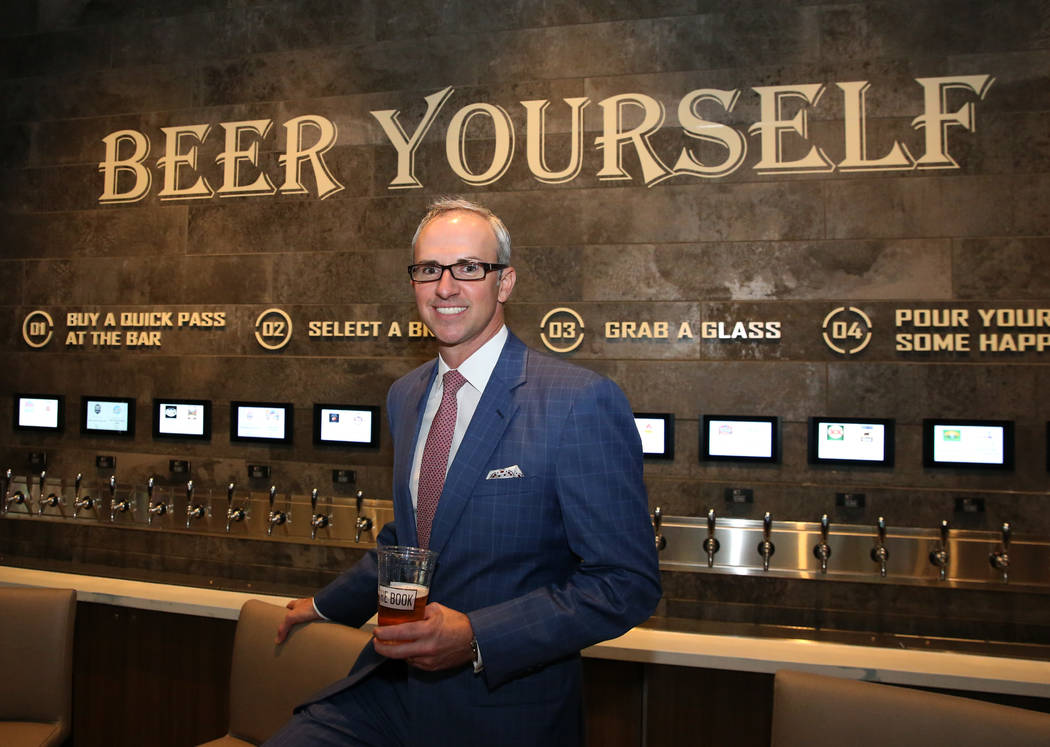 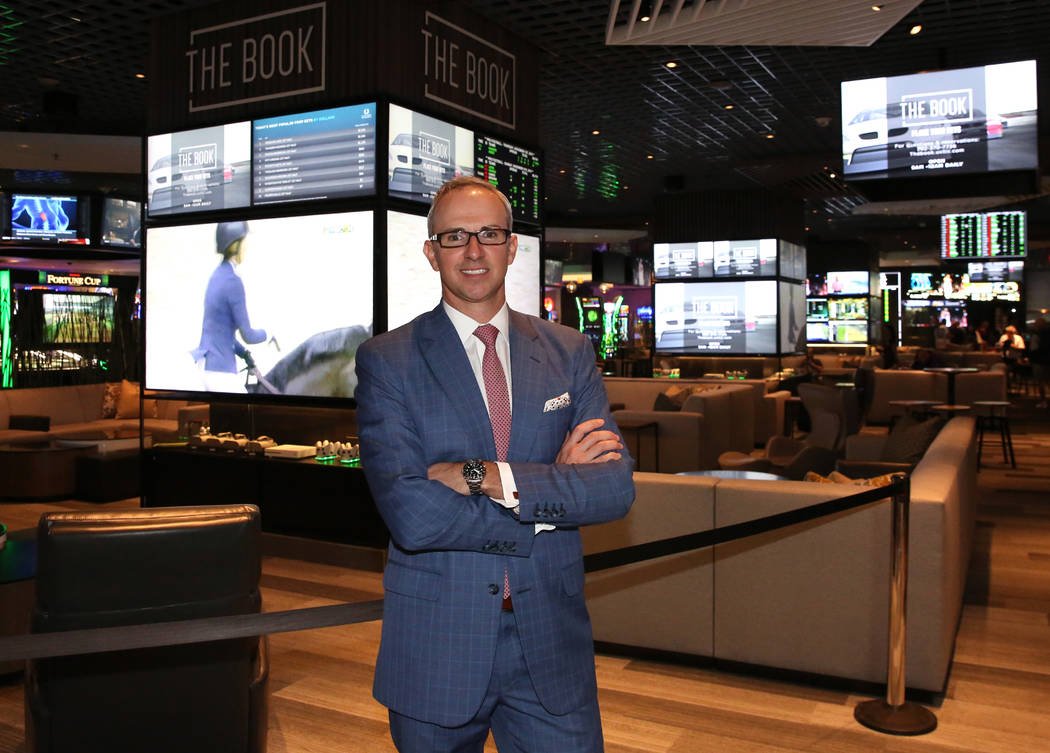 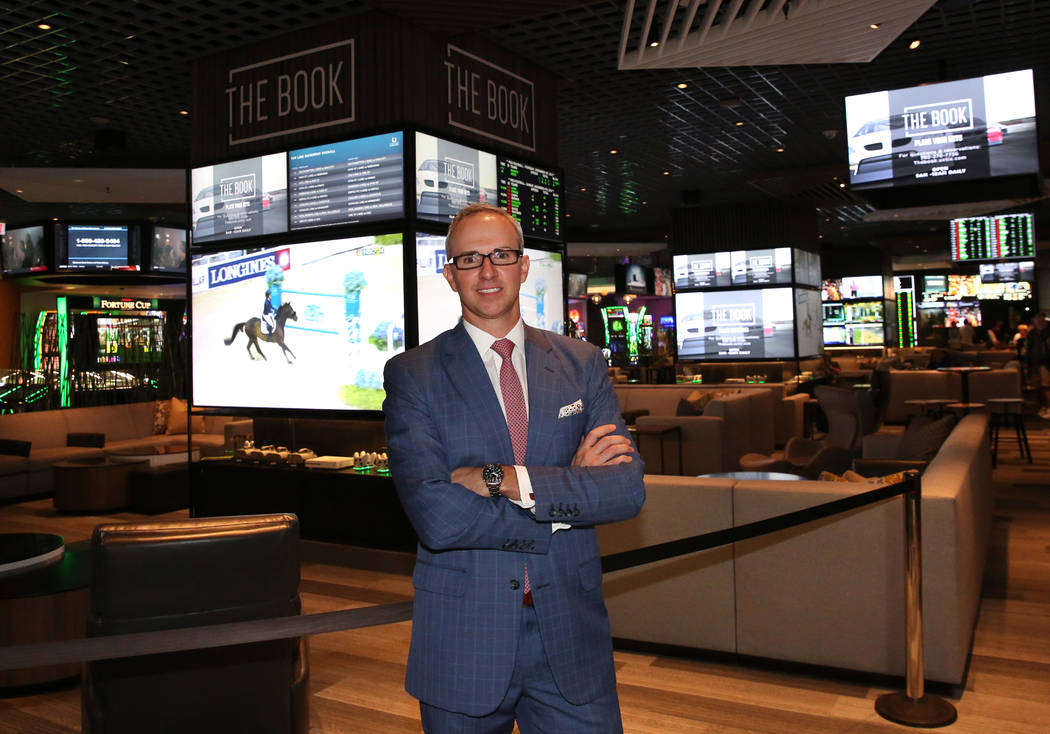 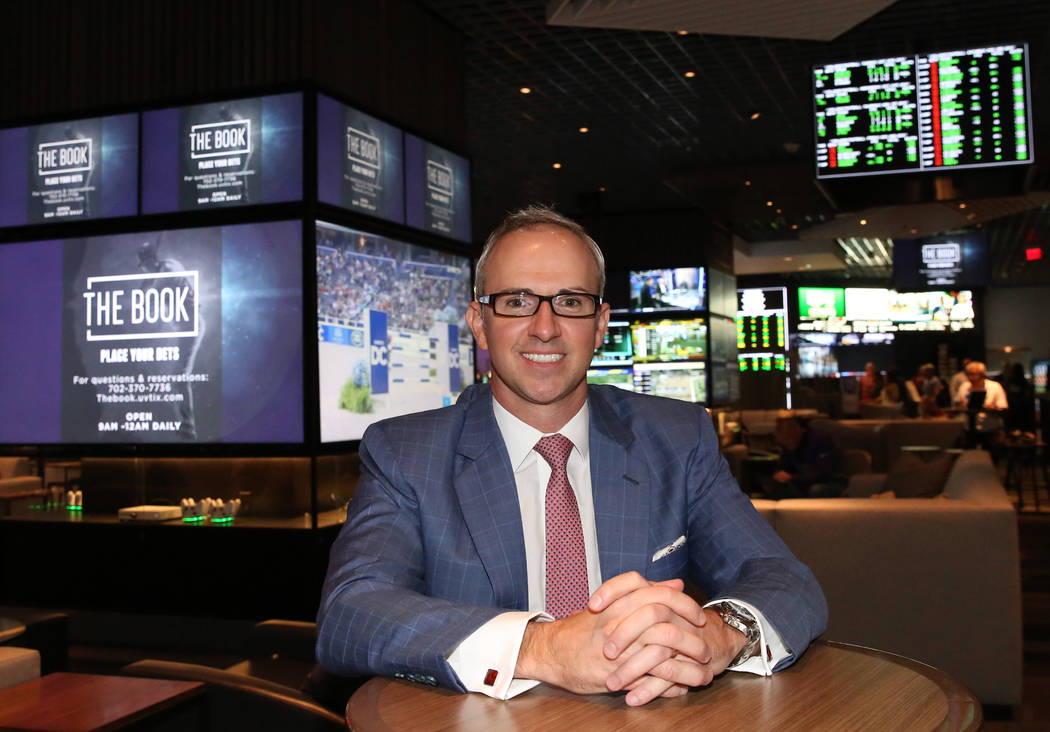 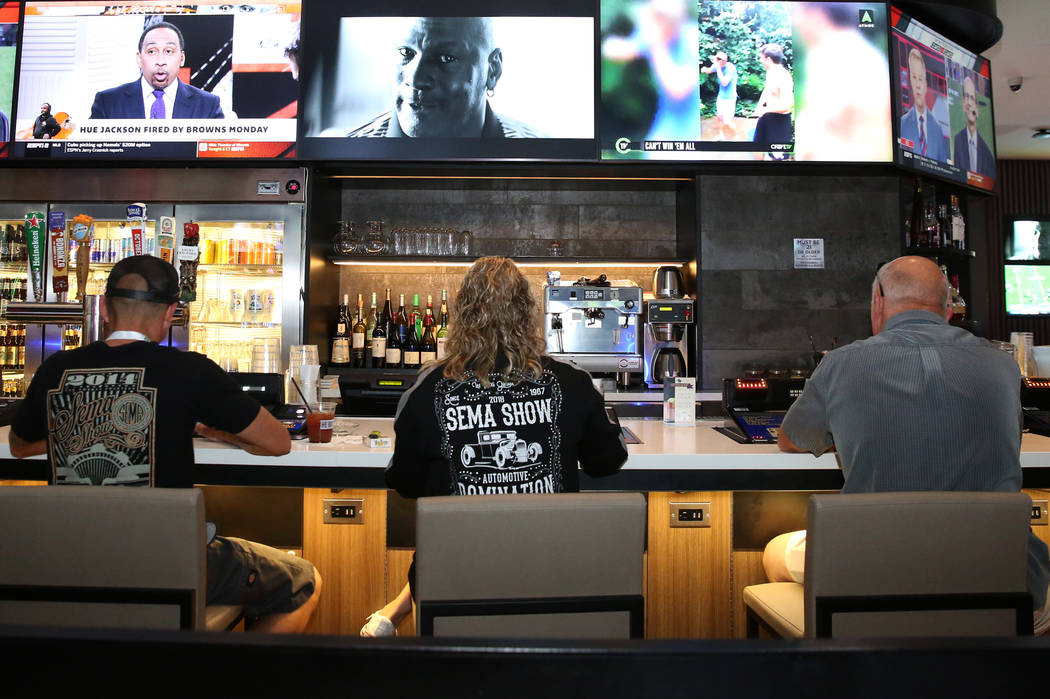 Patrons enjoy their drinks at the gaming floor at the LINQ photographed on Friday, Nov. 2, 2018, in Las Vegas. (Bizuayehu Tesfaye/Las Vegas Review-Journal) @bizutesfaye 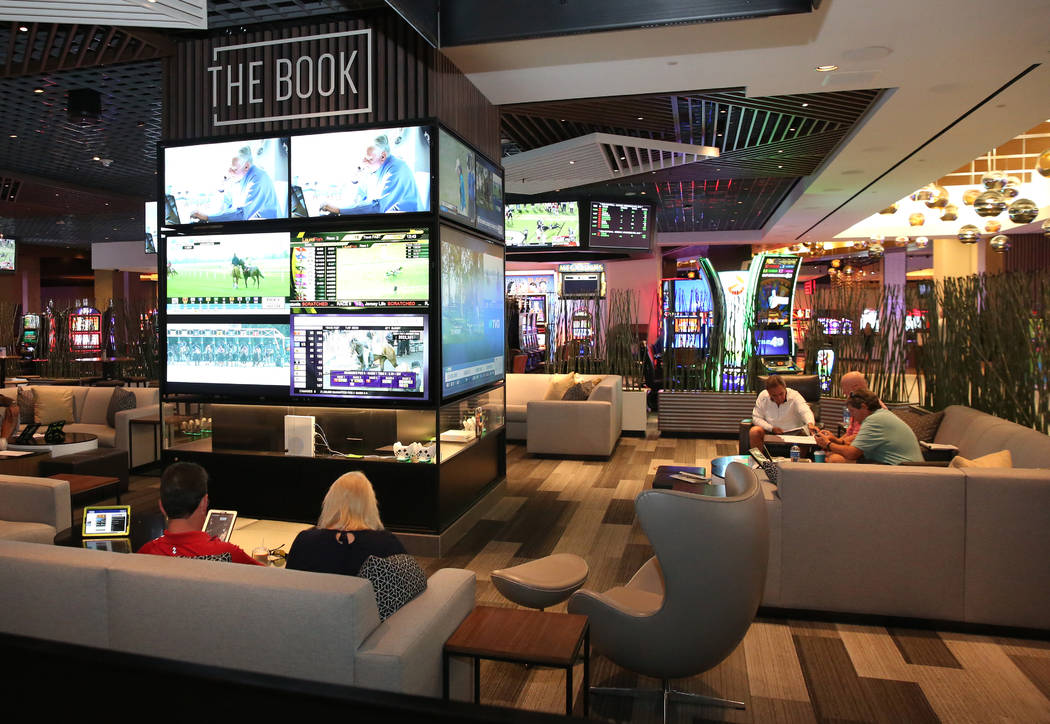 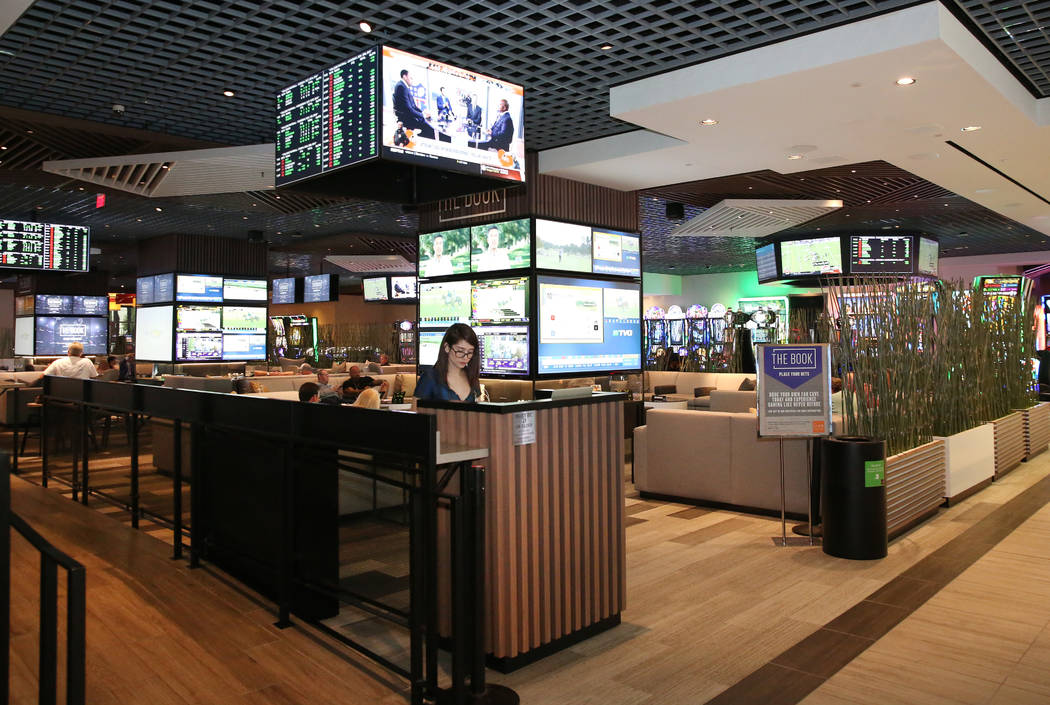 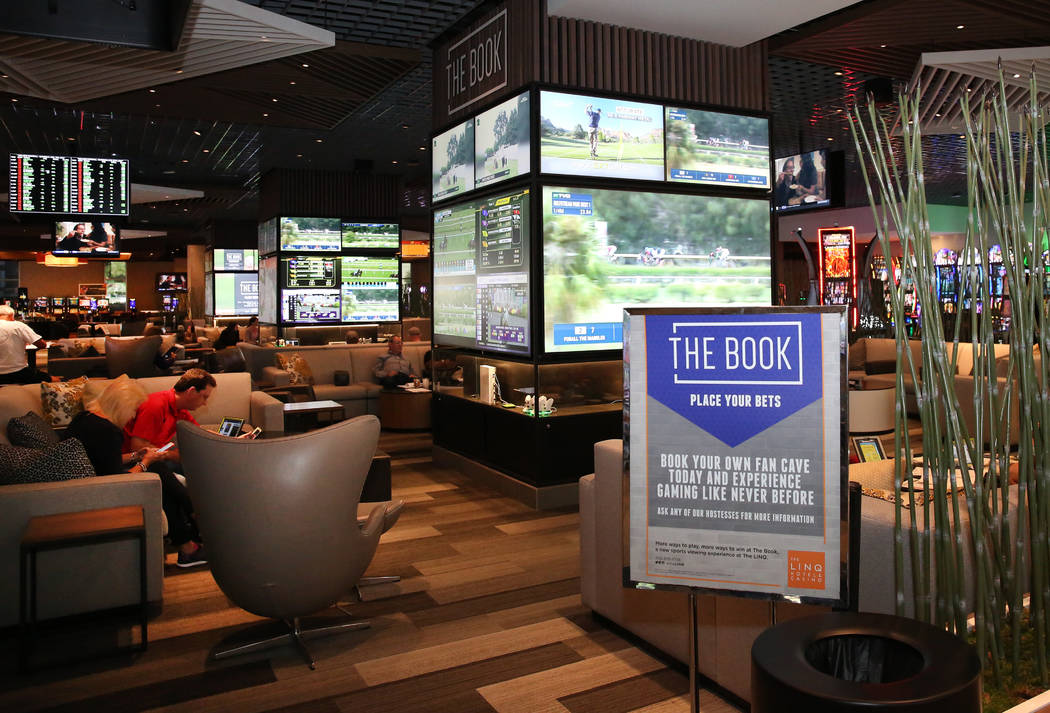 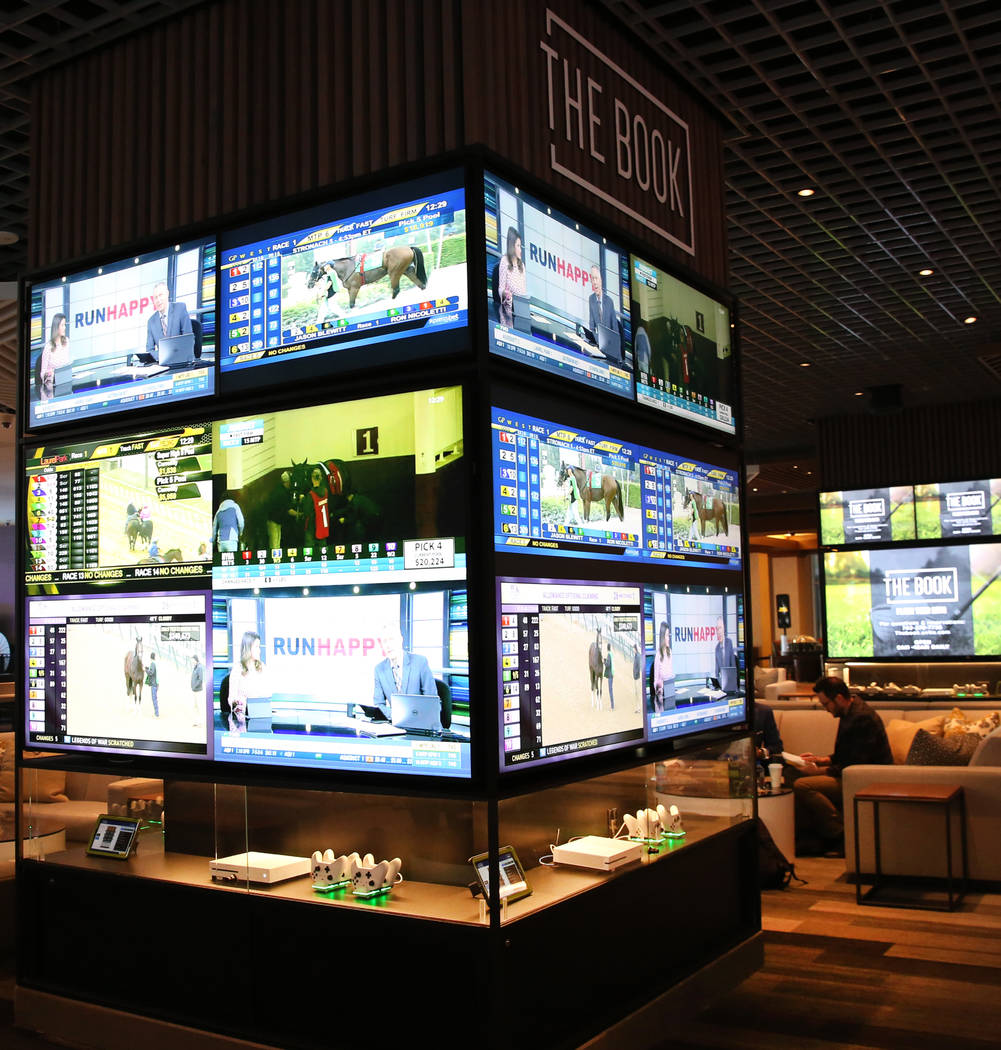 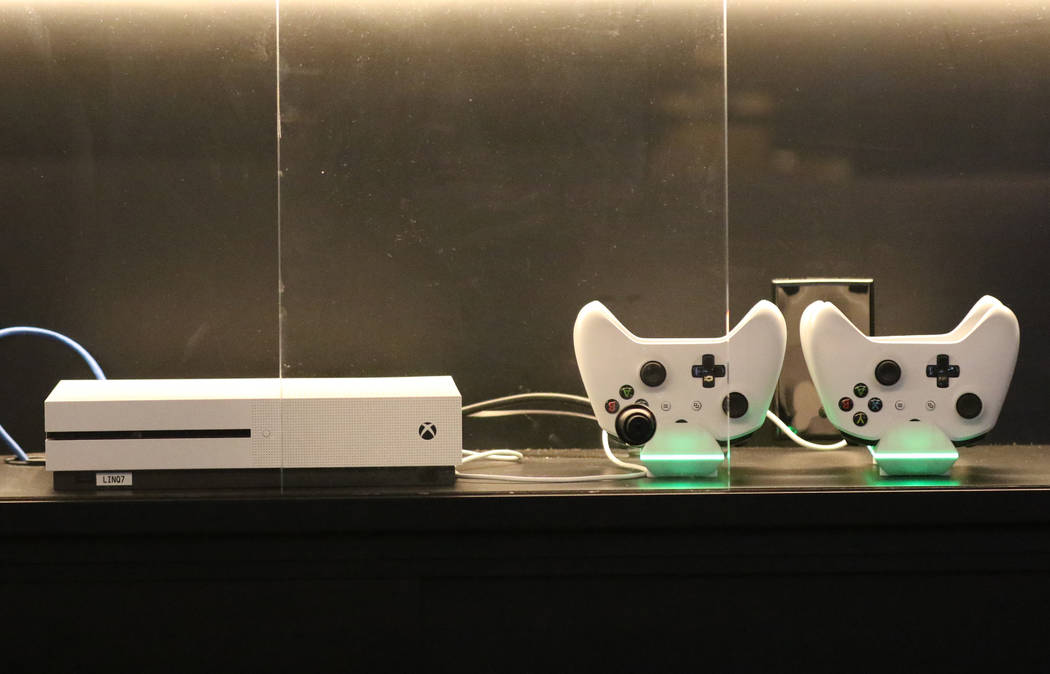 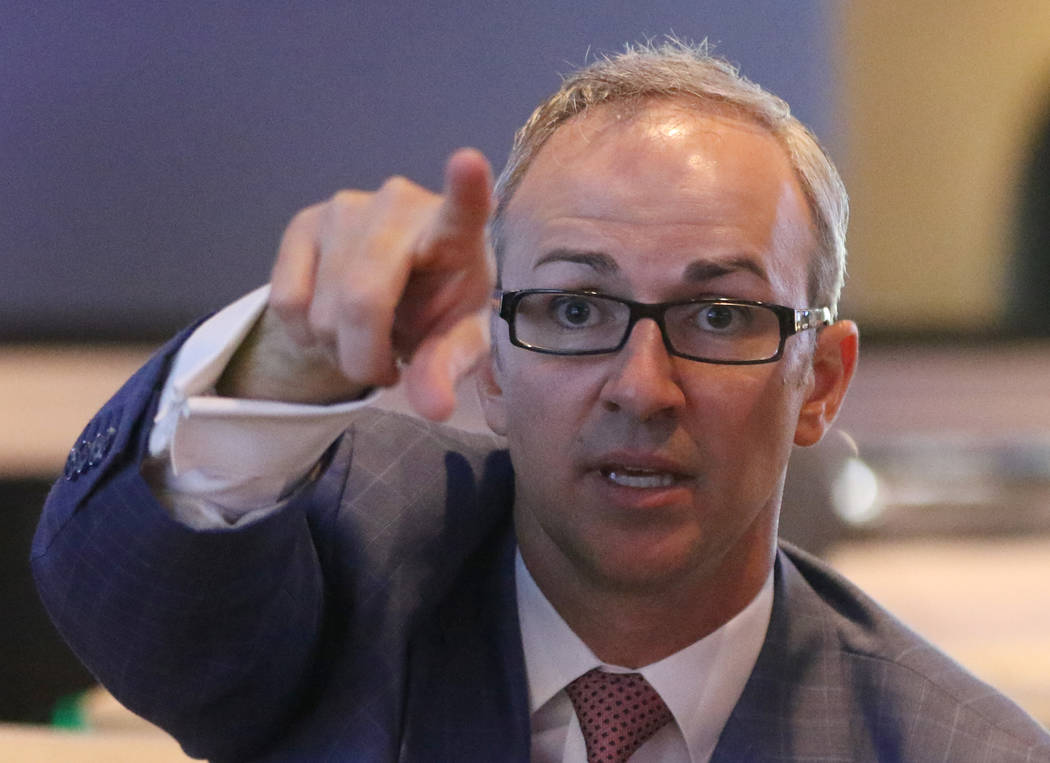 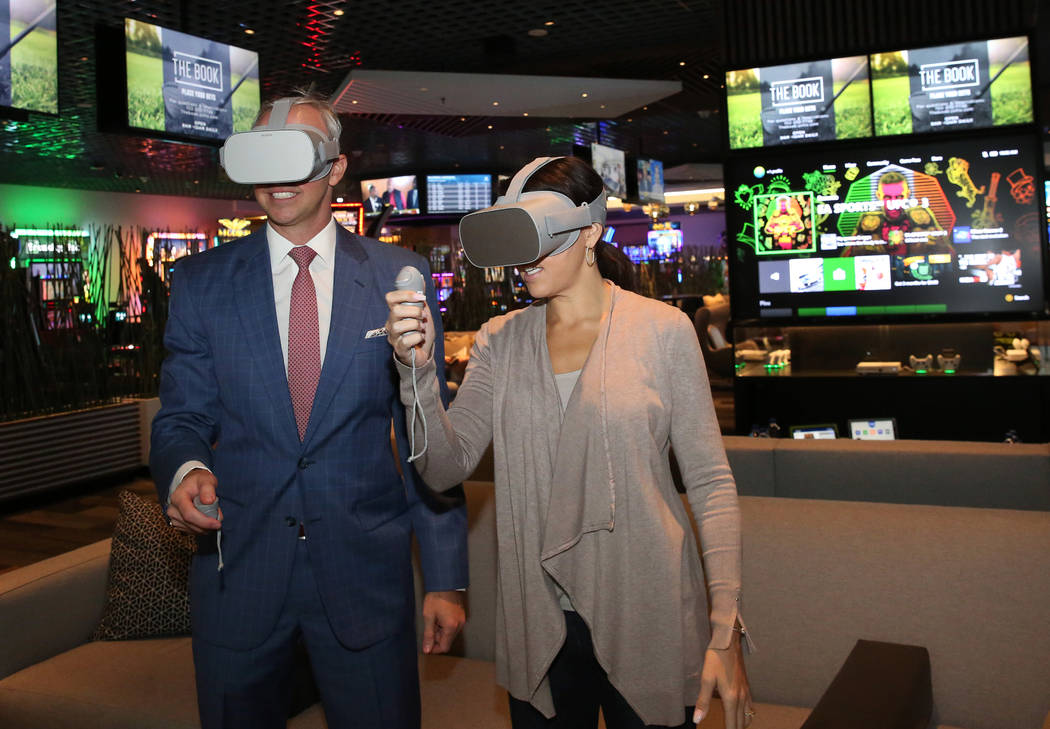 Ryan Stasa and his three friends from Michigan gulped Coors Light and craft beer as they watched “Monday Night Football” this month on a 98-inch screen from the comfort of a 13-foot-wide, L-shaped couch.

Zach Hollister looked right at home as he rested on his back at the long edge of the couch while Dan Savel kicked his feet up on a chair. Nearby, on the coffee table, was the tablet to switch TV channels and adjust the volume.

When the game was over, the 30-year-olds grabbed the Xbox consoles under the screen to play video games, including FIFA 19 and NHL 19.

It is a scene that probably plays out in the living room of millennial bachelors across the country on game days. But the young men were on The Linq gaming floor, inside a rented space.

The Fan Cave — as the space is called — is the first phase of a larger experiment by Caesars Entertainment Corp. to discover what new experiences and forms of entertainment will attract a “millennial-minded” crowd to a casino, said Christian Stuart, executive vice president of gaming and interactive entertainment.

Caesars Entertainment Corp. is turning 44,000 square feet at The Linq Hotel, including the sports book area, into its “casino of the future” testing grounds. It will be the largest experimental area of its kind on the Strip when it is completed in the second quarter of 2019. MGM Grand’s Level Up, which was opened two years ago, occupies 12,000 square-feet.

“This is like our lab. So what we are doing is spending the money here, and when we find the things that really connect with customers, we will leverage it up to other properties,” Stuart said.

The area will place greater emphasis on social experiences and mobile usage. Slot and sports betting tournaments will be held regularly, and leaderboards will be visible to encourage people to compete for prizes.

The experimental area is located near the entrance to the new Strip zip line, which should help boost customer exposure, Stuart said.

Strip casino revenues have stagnated over the past decade as younger audiences shy away from the slots that their parents and grandparents play. Las Vegas Strip total gaming revenue peaked in 2007 at $6.8 billion and grew just 1.3 percent last year to reach $6.5 billion.

Casino operators need to experiment with their gaming floors to figure out what will attract new visitors and end the decade-long revenue stagnation, analysts said.

“We think that it’s important to test out new concepts such as esports, virtual reality, skill-based gaming, mobile sports betting, and others to broaden the customer base of future Gaming customers. By piloting and testing these new features and concepts in Las Vegas, Caesars can stay ahead of the pack in a cost efficient manner,” said Chad Beynon, a gaming analyst at Macquarie in New York.

The 12 Fan Caves were launched Oct. 11 as part of The Linq’s sports book revamp, and each can hold up to 10 people. Groups renting a cave must guarantee to spend between $100 and $1,500 in food and beverage, depending on the day of the week and type of event. Prices skyrocket on Super Bowl Sunday to $4,000.

Stuart said the Fan Cave area is generating double the food and beverage revenue of the sports lounge that it replaced.

Each cave features a 98-inch TV that can be converted into four screens and two 49-inch TVs. They each total 200 square feet and include an Xbox console, virtual reality headsets and games by Oculus, the Facebook subsidiary.

The Fan Caves are served by wait staff, but guests can pour their own craft beer from 24 different taps. Mobile food ordering from the cave will launch at a later date.

“This is not a traditional sports book where you sit in a big row,” Stuart said. “You own this space, so it’s much more social. You can hang out with your friends, pour your own beer, order your own food.”

Stasa said the Fan Cave offers something you can’t find at most other sportsbooks and sports bars: control of the channels.

“The iPad remote was honestly awesome. It’s such a pain to always be asking for someone to change TVs. Having complete control and being able to put six games on at once was great,” he said.

Alan Albanes shared Stasa’s enthusiasm for the new offering at The Linq. Albanes and nine friends rented a Fan Cave on Dec. 17 for the first time to watch “Monday Night Football.”

Albanes said he and his friends normally visit a PT’s to watch sports together.

After their first experience at the Fan Cave — which included playing a UFC game on the Xbox during halftime — Albanes said they are considering coming back Jan. 6 to watch football.

“This is a great place to bring a lot of people,” he said.