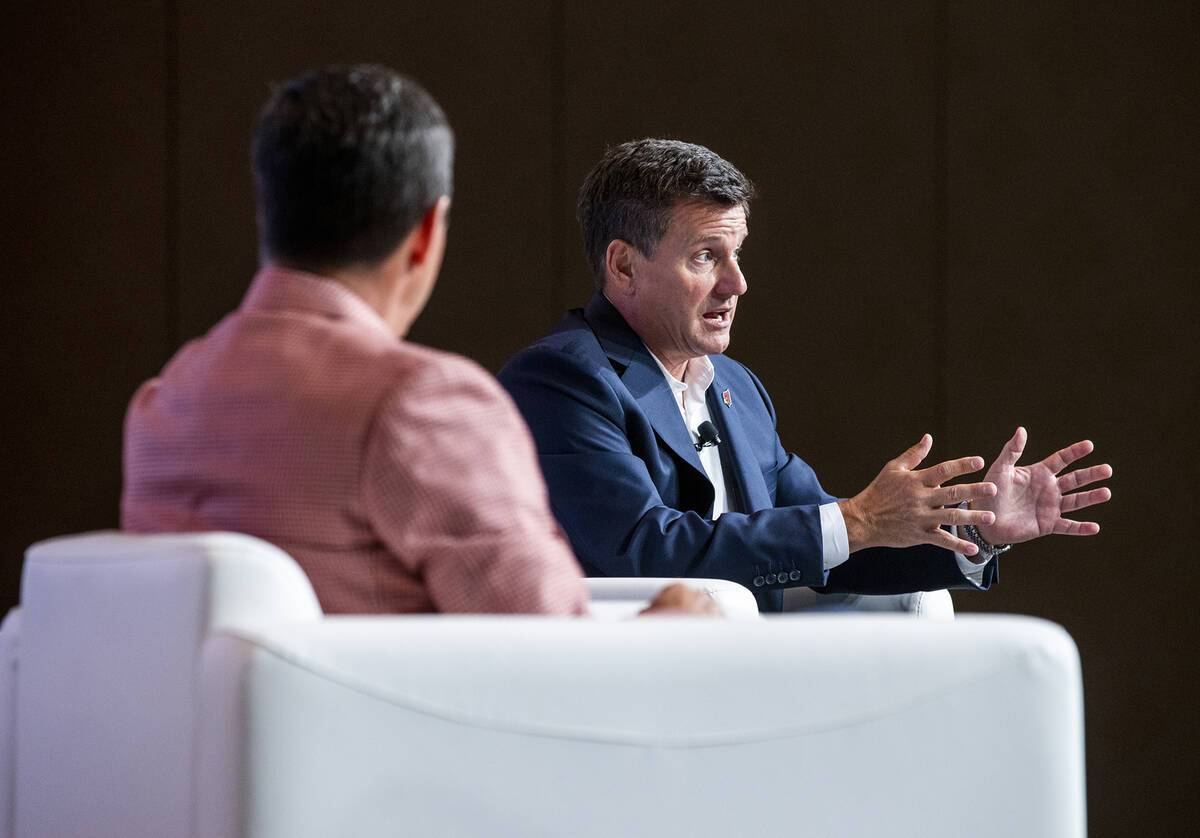 The Arizona Cardinals' Michael Bidwill, right, answers a question from Bill Miller, President and Chief Executive Officer of the American Gaming Association, left, during a keynote presentation on day 3 at the Global Gaming Expo 2021 conference in The Venetian Expo on Wednesday, Oct. 6, 2021, in Las Vegas. (L.E. Baskow/Las Vegas Review-Journal) @Left_Eye_Images 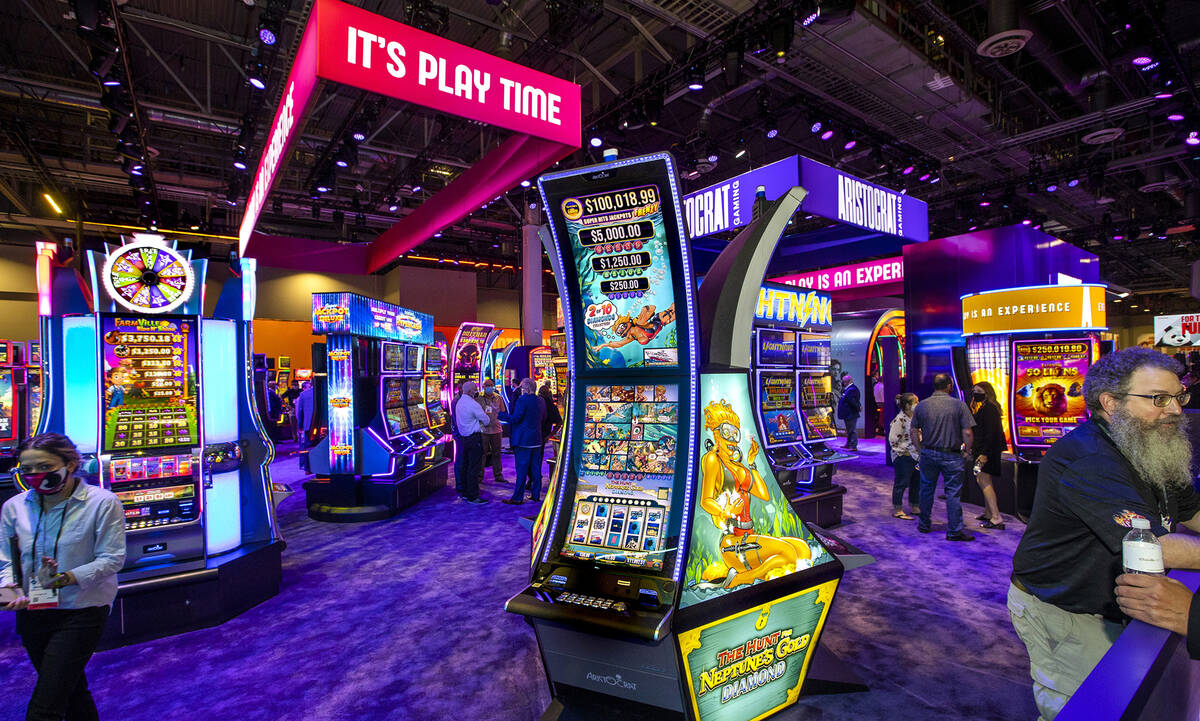 A wide variety of slots are ready for the play within the Aristocrat Gaming display area during day 3 at the Global Gaming Expo 2021 conference in The Venetian Expo on Wednesday, Oct. 6, 2021, in Las Vegas. (L.E. Baskow/Las Vegas Review-Journal) @Left_Eye_Images

The Arizona Cardinals will soon have a sports betting operation near their stadium for wagers on NFL games and other big events, just the way the Raiders and Allegiant Stadium plan to do it here.

Cardinals owner Michael Bidwill on Wednesday said a BetMGM-branded sportsbook is being built adjacent to State Farm Stadium, the team’s home field in Glendale, Arizona, in time for next year’s football season.

But bigger opportunities await in the years ahead: Super Bowl 57 will be played at the stadium in 2023, and college basketball’s March Madness Final Four will be played there in April 2024.

The four-day show at The Venetian Expo closes Thursday. The AGA has not reported the number of attendees or the square footage of exhibits, but those who have attended G2E in previous years say the show is smaller than it has been in the past. After a turnout of around 27,000 in 2019, G2E was turned into a virtual event in 2020.

Legalized sports wagering began in Arizona on Sept. 9, the first day of the NFL season. While the Arizona Department of Gaming won’t distribute its first sports wagering statistics until mid-November, Bidwill said betting on games has been popular since opening day.

The Las Vegas Stadium Authority and the Las Vegas Convention and Visitors Authority have strategized about attracting big-ticket sporting events and concerts to Southern Nevada’s new 65,000-seat stadium as a tourism boost. Betting on games played there is no problem with several mobile apps available and a dozen commercial casino sportsbooks within blocks of the stadium.

“There were some early news reports that the sportsbook would be built inside the stadium, but it’s actually outside of it, easily accessible to fans and sports bettors 365 days a year,” he said.

Miller and Bidwill discussed how important it will be to “get sports betting right” in Arizona. Bidwill noted the tightrope walk Arizona casino companies are doing, aggressively marketing their new product with television advertising while trying to emphasize responsible gaming and not enticing any illegal underage betting.

Miller said he doesn’t want to see detractors criticize the industry for an oversaturation of advertising.

Bidwill acknowledged the challenge: The Cardinals are the last of the NFL’s undefeated teams this year with three road wins and one at home, and the fan base has embraced the team at a time when fans can bet on them.

Miller and Bidwill also compared notes on how the Cardinals and casinos — both, essentially, entertainment enterprises — survived an 18-month shutdown that saw casinos close and NFL teams playing in stadiums without fans.

Bidwill said the pandemic forced the team to be nimble.

“We needed to be more like a speedboat and less like an aircraft carrier because of the way things developed,” he said. “We needed to be good listeners as employers and really bring leadership to a lot of different initiatives to communicate.”

Earlier in the day, three casino CEOs — two with properties on the Strip — said they’re responding to changes in customer behavior with technology because of the coronavirus pandemic.

In a recent interview with CNBC, Hornbuckle said that MGM has “a great relationship” with BetMGM and that the casino operator is enthusiastic about the prospects for the thriving iGaming and online sportsbook enterprise.

“They’ll need to come to us if they want to continue to operate in the U.S.,” Hornbuckle said. “They can’t do both.”

Hornbuckle also had no comment on last week’s announcement that it plans to buy operations of The Cosmopolitan of Las Vegas for $1.625 billion.

Maddox acknowledged that MGM is ahead of Wynn on technological change in the hotel check-in process with its keyless room entry.

Keyless room entry, also used by Resorts World Las Vegas, enables a guest to enter a code on their smartphone that unlocks their hotel room door. The system minimizes contact between front-desk personnel and guests, a positive during the pandemic.

“MGM has been leading on that front, but we’re catching up quickly,” Maddox said. “Customers want less friction. And some want to interact with people. We want to make sure that they can, so we’re not going to get rid of front-desk agents. Some people would prefer to just check in on the phone, and some people like to talk with someone.”

The Review-Journal is owned by the family of Dr. Miriam Adelson, the majority shareholder of Las Vegas Sands Corp., and operates The Venetian/Palazzo and The Venetian Expo.