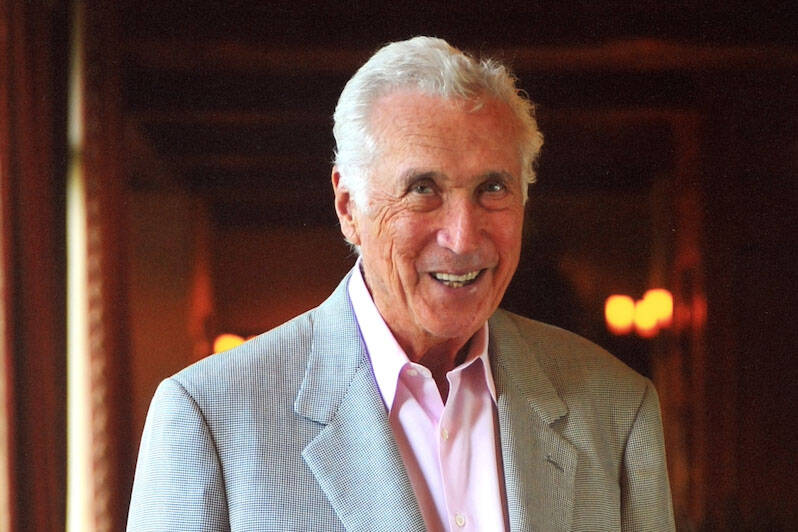 Former International Game Technology chairman and philanthropist Charles “Chuck” Mathewson was remembered Friday as a visionary who set the slot manufacturer on a trajectory to new heights.

Mathewson died at his Reno home Sunday with his family by his side. He was 93.

“Chuck lived an exciting and successful life as a veteran, businessman, philanthropist, and friend to everyone he met,” his family wrote in a statement issued Friday.

Mathewson chaired IGT’s board of directors from 1986 to 2003 and is widely credited for steering the company from a small, Reno-based gaming manufacturer to an industry giant. He was inducted into the American Gaming Association’s Gaming Hall of Fame in 1997 in a class of two — his co-inductee was Frank Sinatra.

He worked in the family grocery business and then served in the U.S. Army for two years. He earned a finance degree in 1953 from the University of Southern California through the GI Bill, his family said.

After entering the securities business, he had a hand in multiple business and arts projects in Southern California and helped found Los Angeles-based investment group Jefferies & Company in the 1960s.

He started investing in a small Nevada slot machine company called IGT in the early 1980s, his family said. He moved to Nevada in 1985 and joined the company’s board of directors, and a year later IGT founder William “Si” Redd asked him to chair the board.

On Friday, IGT offered its condolences to Mathewson’s family and acknowledged “his tremendous contributions to the gaming industry over many decades.”

‘Bit of a mythical figure’

In 2000, Mathewson co-founded the Association of Gaming Equipment Manufacturers, a trade group that advocates for slot machine suppliers, and understood that what was good for one company was good for them all, outgoing AGEM executive director Marcus Prater said Friday.

At the time Prater was with a rival manufacturer, Bally, which is now part of Scientific Games Corp. He remembered Mathewson as “a bit of a mythical figure,” who was tall and carried himself with a certain stature.

“Even though I was supposed to be some sort of semi-important guy,” Prater said, “I never felt like I deserved to be in the same company because of the shadow he cast.”

It was during Mathewson’s tenure that IGT introduced what would become IGT’s most popular slot machine — Wheel of Fortune, one of the industry’s first licensed slot machines based on the eponymous television game show.

That move, according former longtime IGT marketing executive Ed Rogich, grew out of a dinner Mathewson had with a “Wheel of Fortune” television producer.

IGT also found success with its adoption of ticket-in, ticket-out technology that had casino executives tripping over one another trying to replace their coin-operated slots, Megabucks and video poker, Rogich said.

Mathewson also drove the company’s decision to go public, Rogich said, noting the chairman was the right person with the right team in the right place at the right time.

Rogich remembers Mathewson as a master business strategist who worked behind the scenes to develop relationships with gaming executives.

“He wasn’t the driver but he planted the seeds,” Rogich said. “He wasn’t the kind of guy to come and run in and take over a meeting.”

Mathewson was a significant donor to the University of Nevada, Reno. His name appears across the university via the Mathewson-IGT Knowledge Center library and the Mathewson University Gateway campus expansion project.

University President and former Nevada Gov. Brian Sandoval in a statement lauded Mathewson a visionary leader and an inspiration to young entrepreneurs. He said the library is one of the most technology advanced in the U.S. and called Mathewson a champion of the gateway district project.

Reno Mayor Hillary Schieve hailed Mathewson as one of the special people who’ve positively impacted her life and someone who made Reno a better place. She and Sandoval each expressed condolences to his family.

“Chuck will always be remembered as one of our region’s greatest business leaders,” she said in a Thursday statement. “Chuck was a northern Nevada icon and will be sorely missed.”

Mathewson is survived by his wife, Stacie Mathewson; sons Robert, Miles and Curtis Mathewson; daughters Easter Sullivan and Paulina Ladreyt, and their families, the statement read. A private family service will be held at a later date.