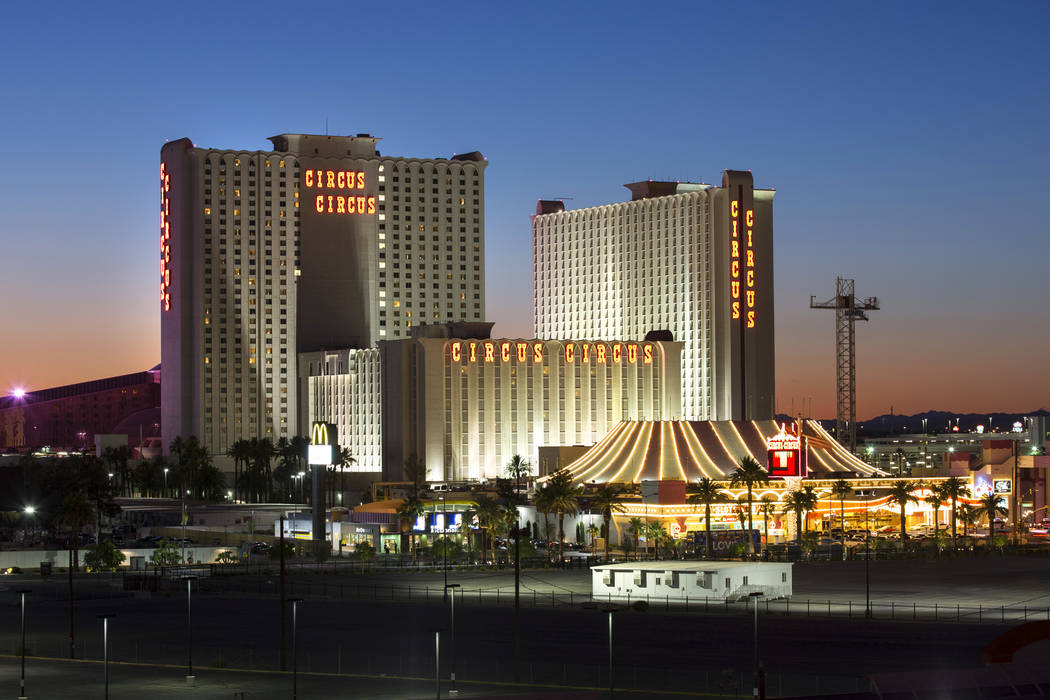 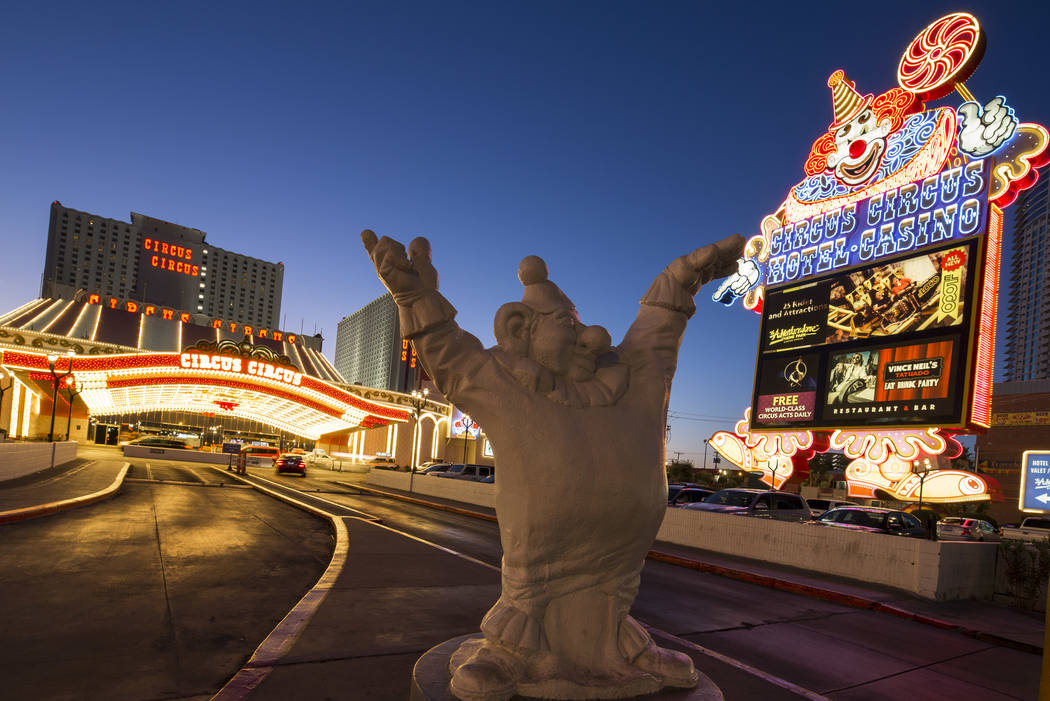 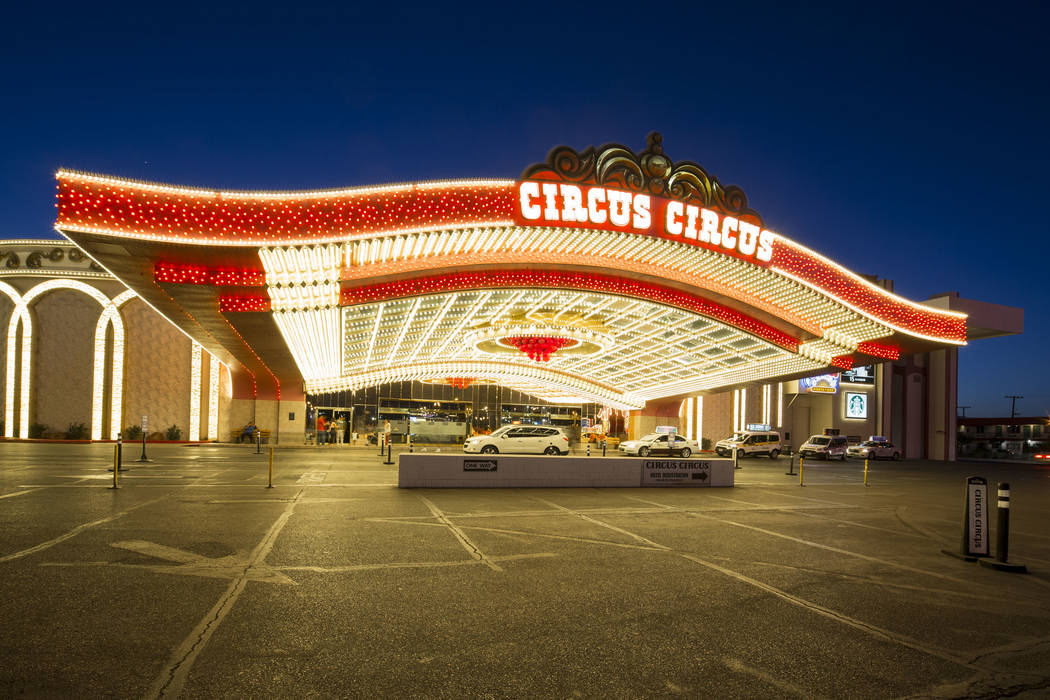 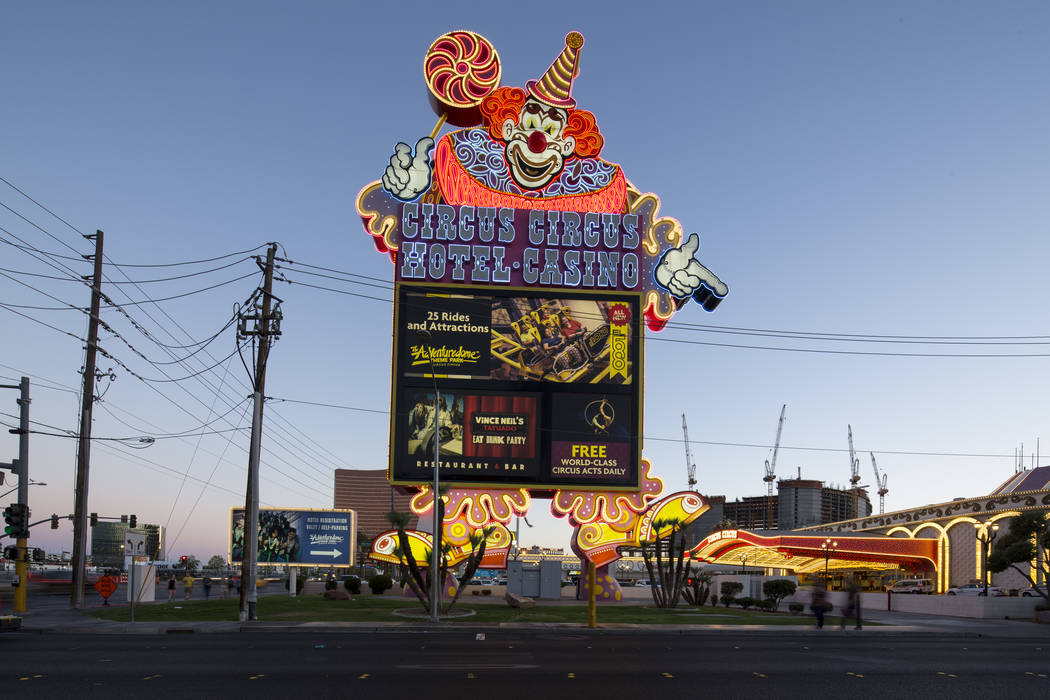 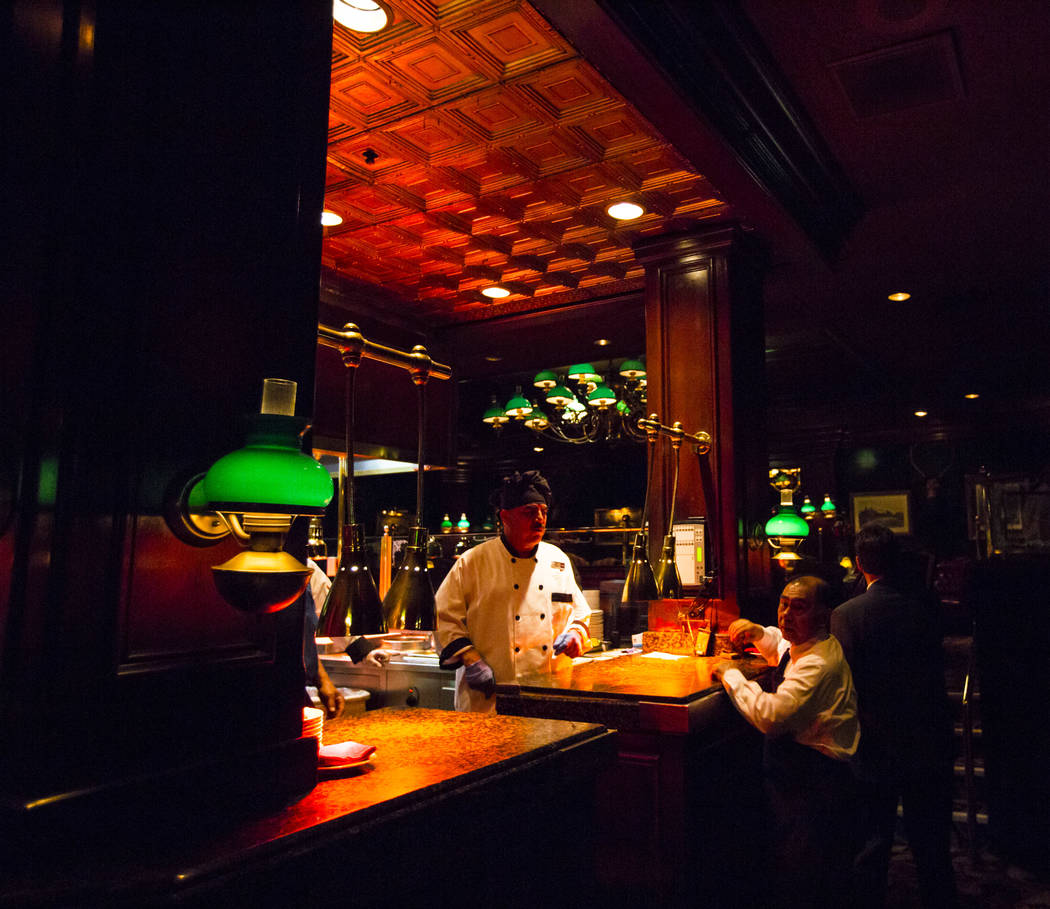 A kitchen area in the center of the dining room at The Steak House at Circus Circus in Las Vegas. (Chase Stevens/Las Vegas Review-Journal) @csstevensphoto 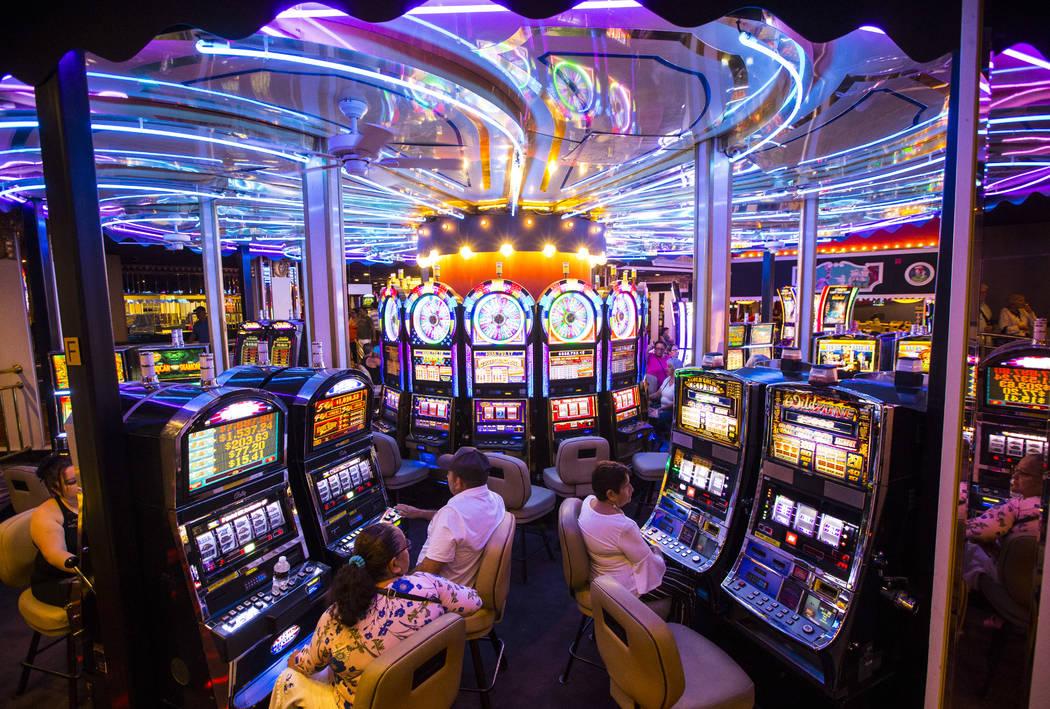 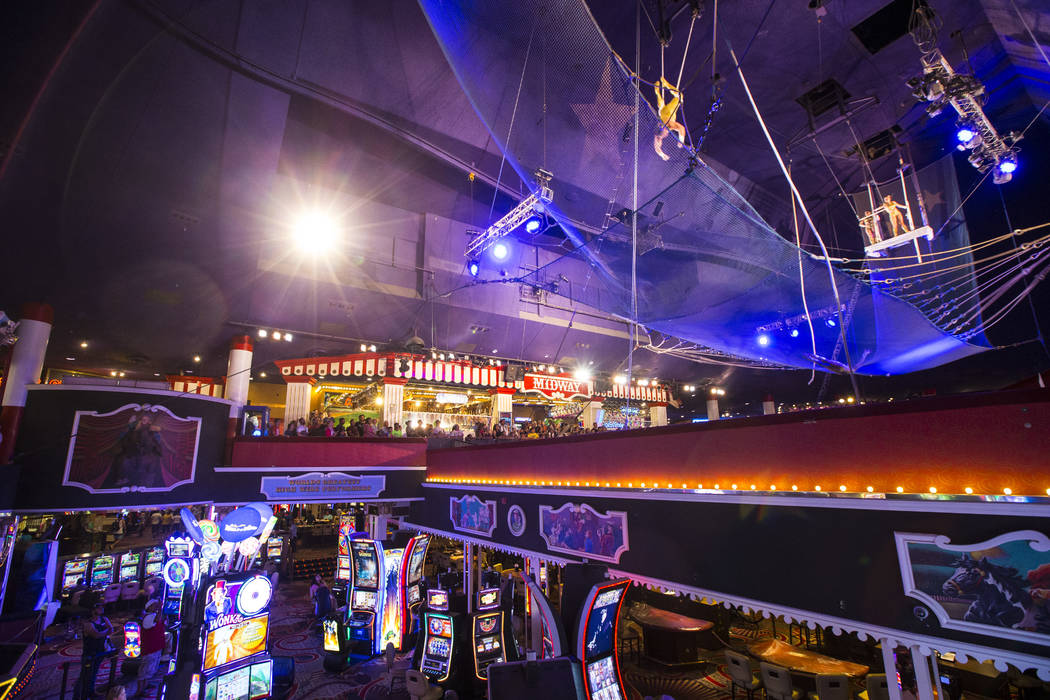 The Flying Poemas perform at the carnival midway above the casino floor at Circus Circus in Las Vegas. (Chase Stevens/Las Vegas Review-Journal) @csstevensphoto

Fourteen years after acquiring the family-friendly Circus Circus, MGM Resorts International is in talks to sell the property to TI owner Phil Ruffin.

Ruffin and MGM reached a handshake agreement on Sept. 12 for Ruffin to buy the hotel-casino, along with the Las Vegas Festival Grounds parcel, a multi-use entertainment venue on the southwest corner of Las Vegas Boulevard and Sahara Avenue, according to a person familiar with the negotiations. Talks with other interested buyers ceased on Sept. 13.

Neither party has signed paperwork finalizing the sale at this time, according to the source. MGM Resorts was said to have put a $1 billion price tag on the entire hotel and land package, but the sale price for the property has not been revealed.

MGM spokesman Brian Ahern and TI spokeswoman Michelle Knoll said the companies do not comment on rumors, but multiple sources have told the Review-Journal that MGM was selling the property.

‘A lot of upside’

Bloomberg previously reported that MGM was in negotiations to sell the property to Ruffin.

The nearly 51-year-old hotel-casino, estimated to be worth between $850 million and $950 million by Macquarie analyst Chad Beynon, has been a gold mine for MGM over the years. Between 2015 and 2017, the property posted the fastest percentage growth in average daily room rate and cash flow among MGM’s Strip resort properties.

This wouldn’t be Ruffin’s first deal with MGM. In December 2008, the 84-year-old businessman purchased TI — then known as Treasure Island — from the company for $775 million. He also owns about 50 percent of Trump International in Las Vegas, and told the Review-Journal earlier this year that he was interested in acquiring Caesars Strip properties, if they were to go up for sale.

Circus Circus has been known as a money-maker on the Strip. The property made about $65.9 million in net revenue last quarter, with about $17.7 million in cash flow.

The 3,767-room property is known for its indoor Adventuredome amusement park and 10-acre RV lot, the only one of its kind on the Strip. Occupancy during the second quarter was 87 percent, up from 85 percent the year prior, and the average daily room rate was $88, compared to $81 the same quarter the previous year.

But that’s not to say the property isn’t valuable. The property sits on a plot of about 60 acres near Sahara Avenue on the north side of the Strip, near ongoing projects like Resorts World, the Drew Las Vegas and the Las Vegas Convention Center — all developments that could increase foot traffic in the area.

“There’s a lot of upside to the property,” Schwartz said. “I think it’s really poised for revival.”

“It’s an opportunity to start a resort from the ground up,” he told the Review-Journal. “There is a tremendous desire to have an asset on the Las Vegas Strip.”

Other analysts told the Review-Journal that business opportunities abroad and the possibility of a recession could be pushing MGM Resorts International to sell some of its Las Vegas Strip assets.

History of the property

Schwartz said the property has been known as a value-oriented property since the 1970s.

“You had high rollers in Las Vegas, but there weren’t that many,” he said. “But there were a lot of people who’d pay $20 for a room and would gamble … and a lot had families.”

When the property first opened in 1968, it was “a bit of a wild place,” according to UNLV associate professor Michael Green. He said the casino was once known for having acrobats that would perform live above the tables and slot machines — all without a net.

“Circus Circus was (former owner Jay) Sarno’s tribute to his and everyone’s childhood dream of running away to the circus,” Green said. “The Circus Circus didn’t invent the idea that you welcome families, but they found the niche and they stayed in the niche. … Now, it’s a money-making son of a gun.”