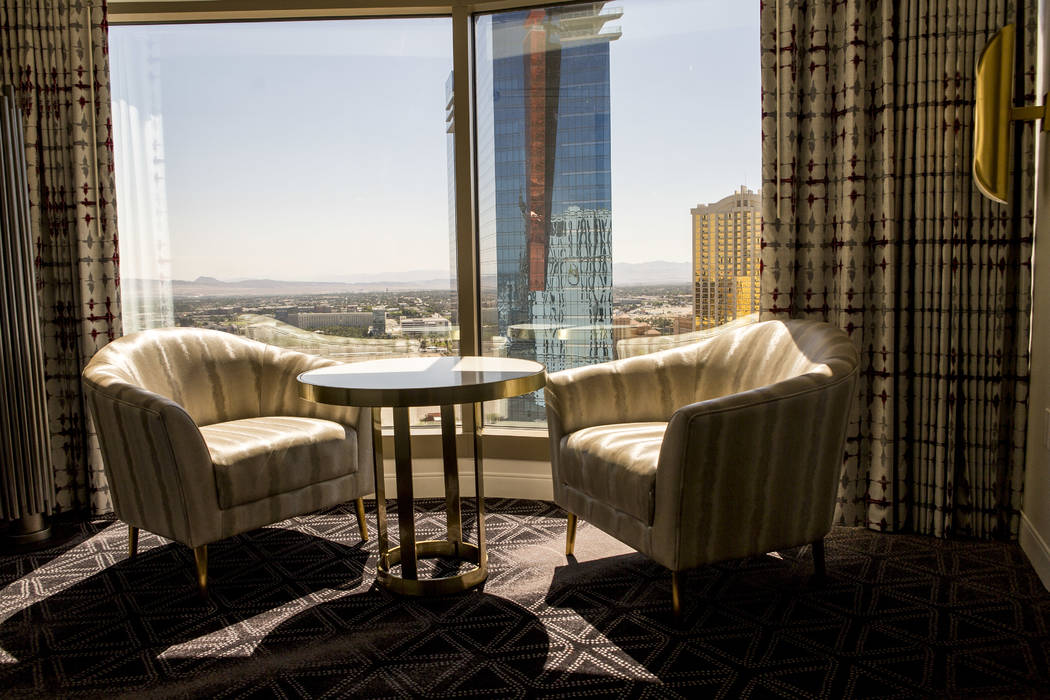 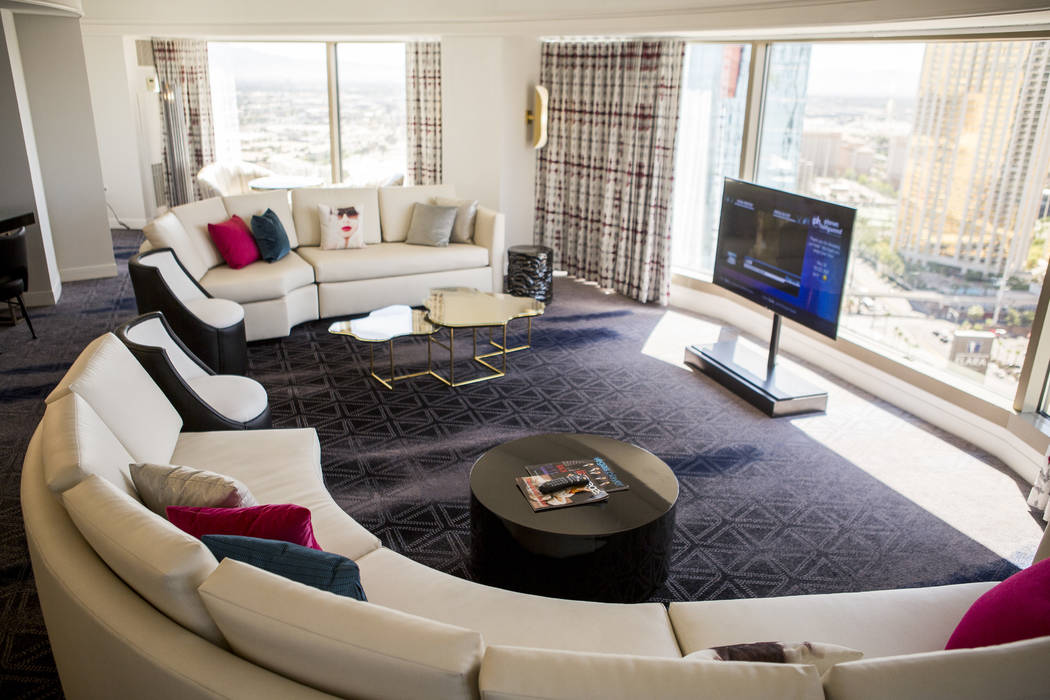 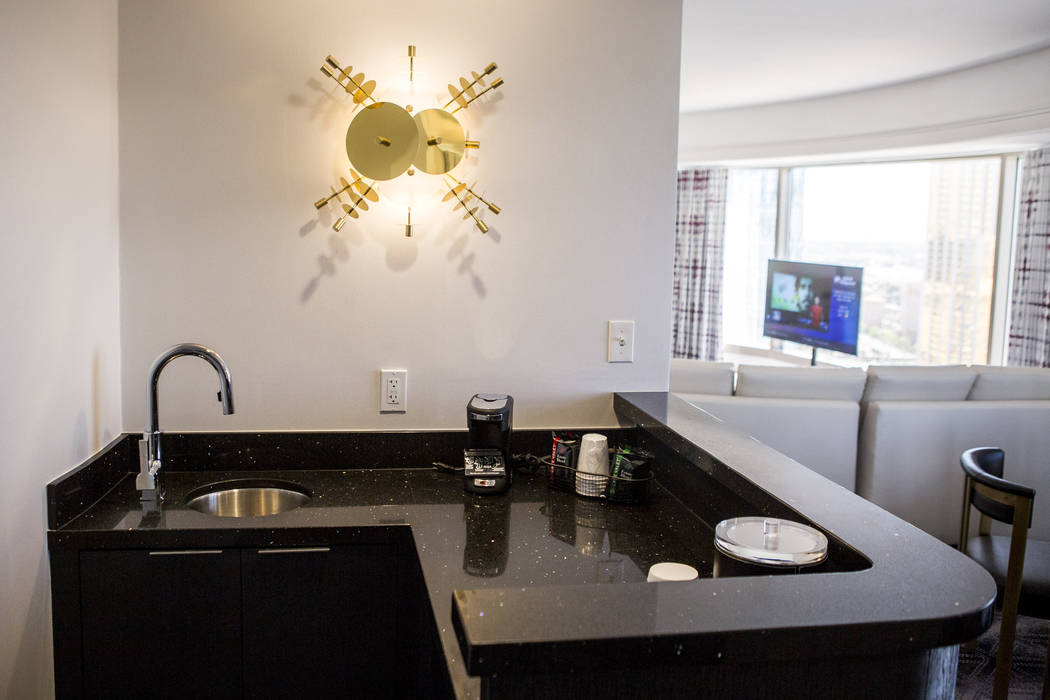 The bar area of a newly renovated panorama suite at the Planet Hollywood Resort on Thursday, May 25, 2017. Patrick Connolly Las Vegas Review-Journal @PConnPie 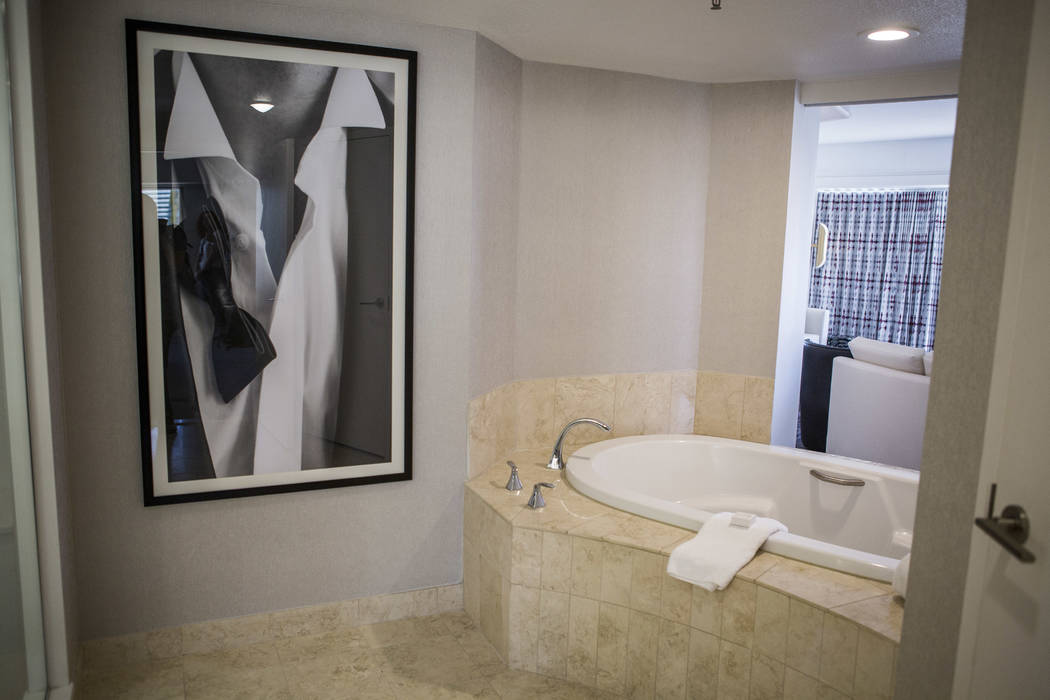 The bathroom can open up with a view of the living room in a newly renovated panorama suite at the Planet Hollywood Resort on Thursday, May 25, 2017. Patrick Connolly Las Vegas Review-Journal @PConnPie 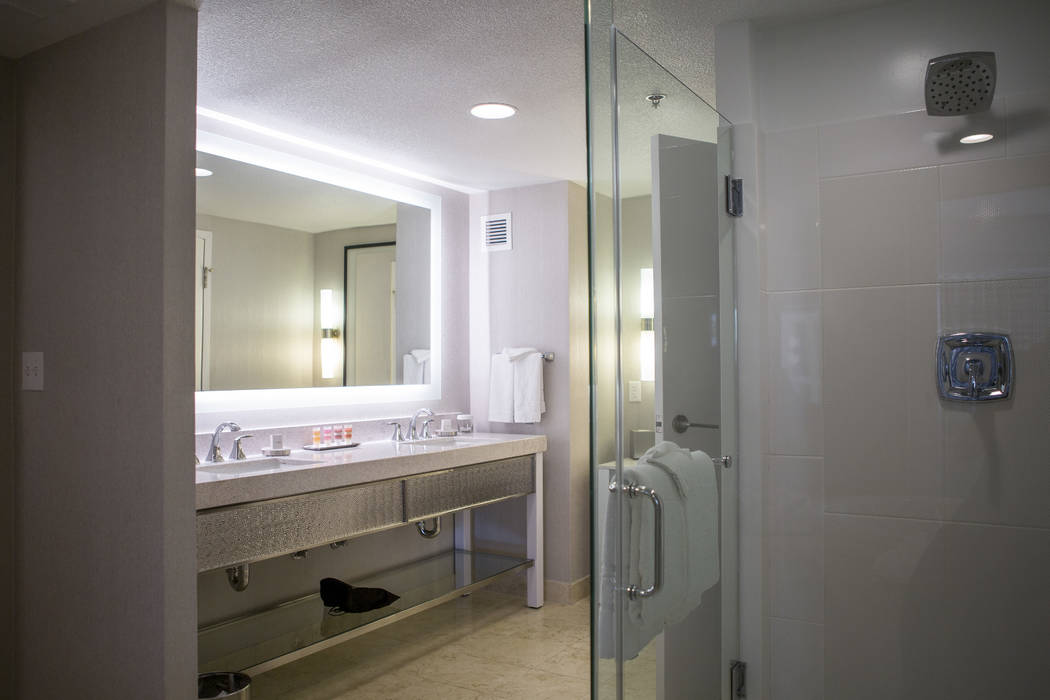 The bathroom of a newly renovated panorama suite at the Planet Hollywood Resort on Thursday, May 25, 2017. Patrick Connolly Las Vegas Review-Journal @PConnPie 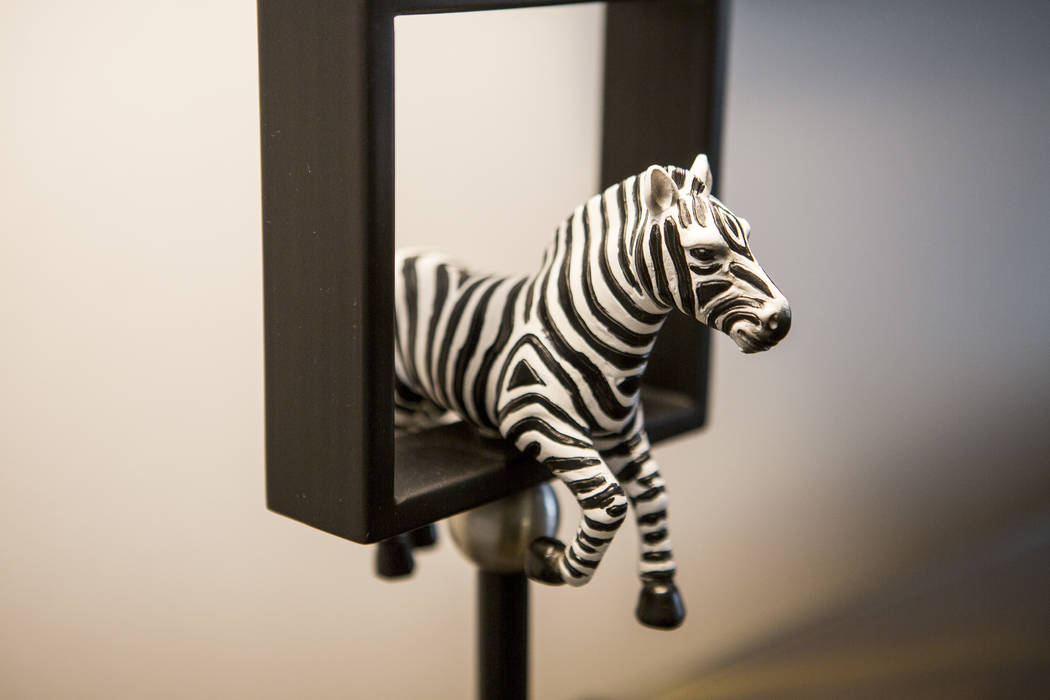 A zebra lamp in a panorama suite at the Planet Hollywood Resort on Thursday, May 25, 2017. Patrick Connolly Las Vegas Review-Journal @PConnPie 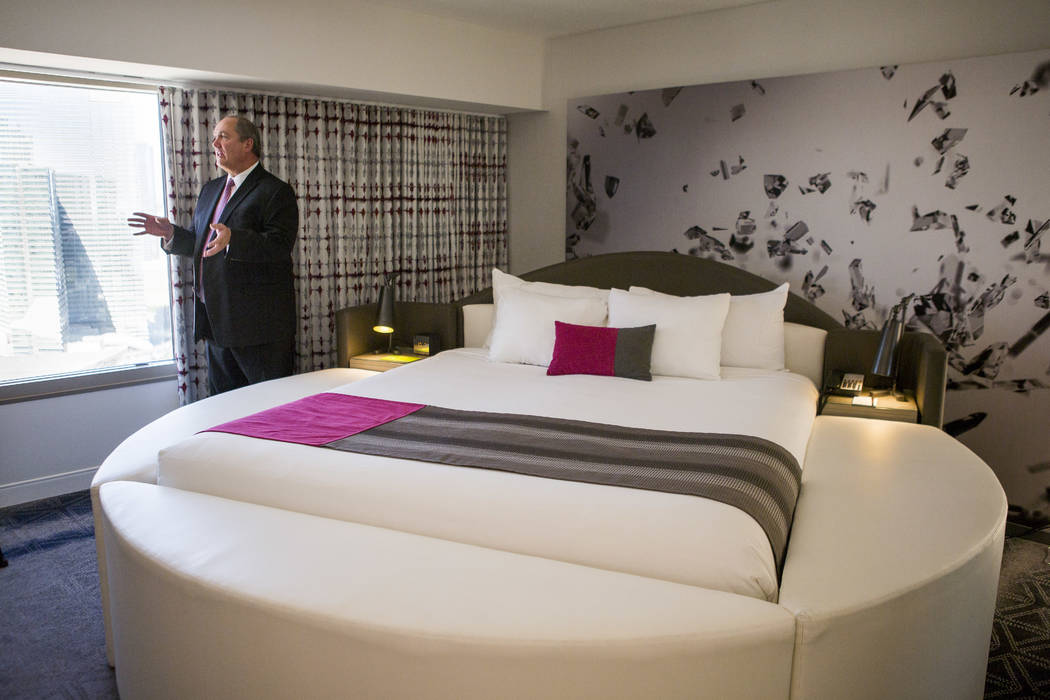 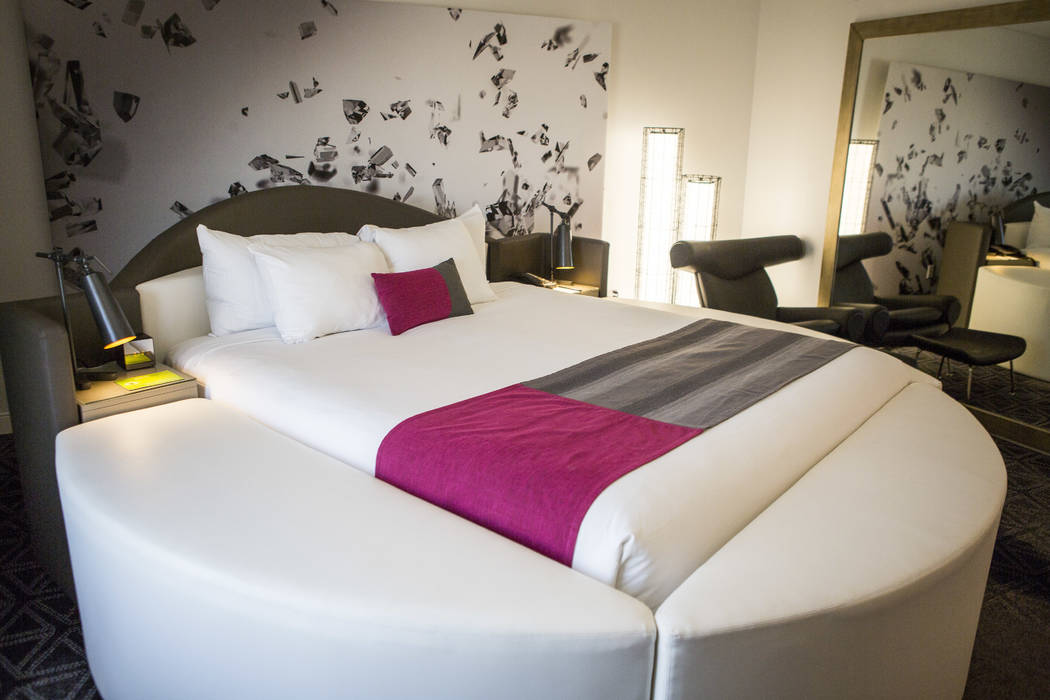 The bedroom of a newly renovated panorama suite with a California King Bed at the Planet Hollywood Resort on Thursday, May 25, 2017. Patrick Connolly Las Vegas Review-Journal @PConnPie 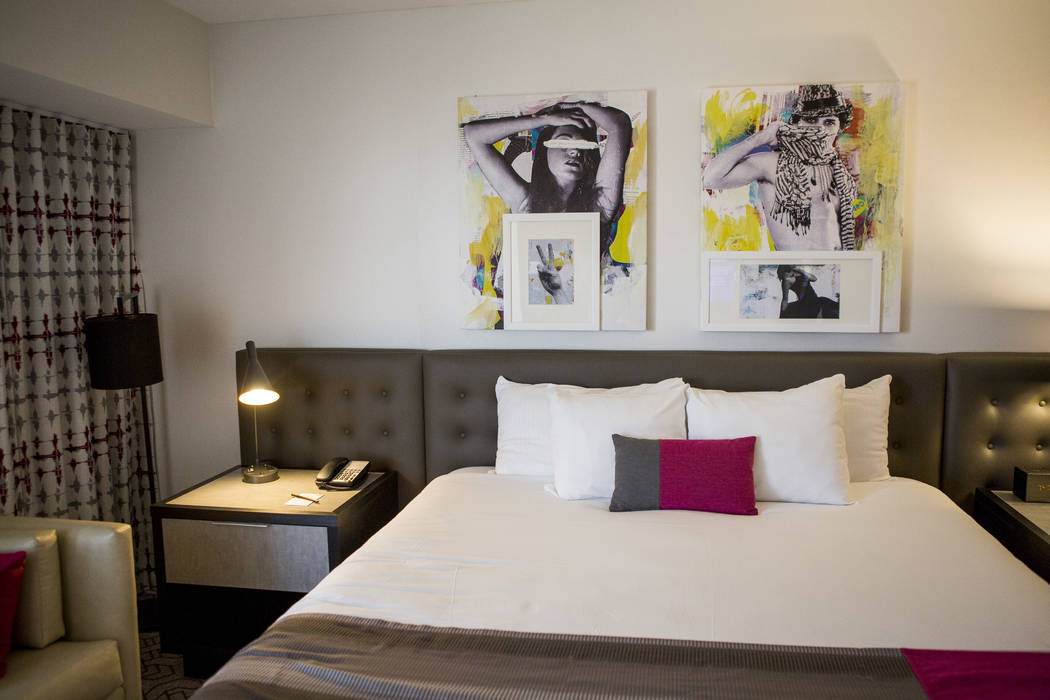 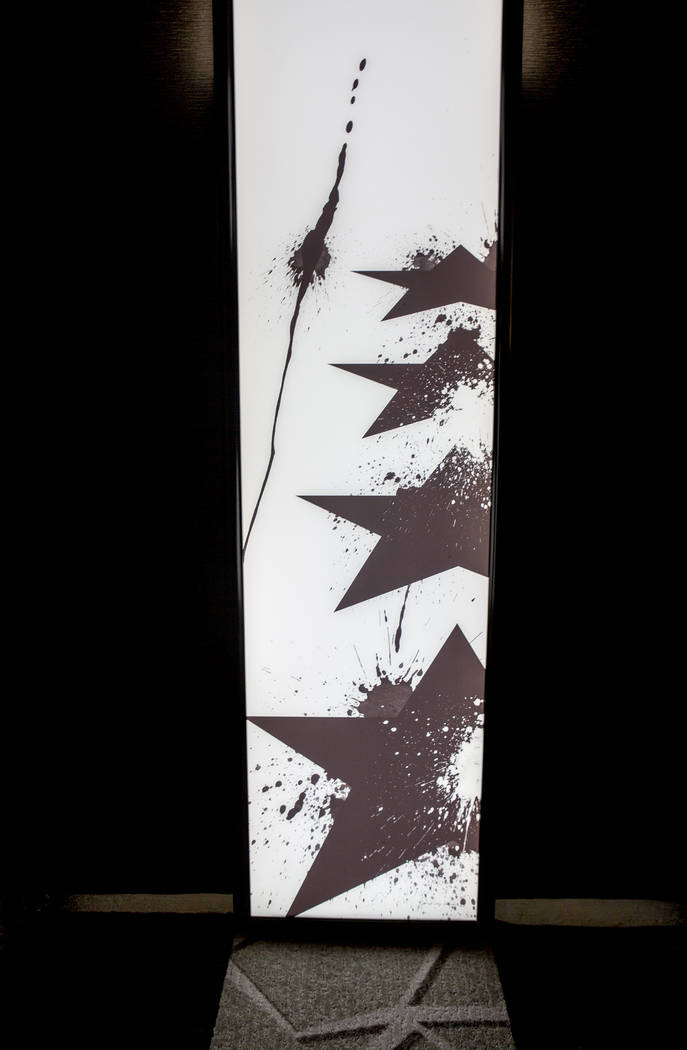 A new lighting feature in the hallway of the Planet Hollywood Resort on Thursday, May 25, 2017. Patrick Connolly Las Vegas Review-Journal @PConnPie 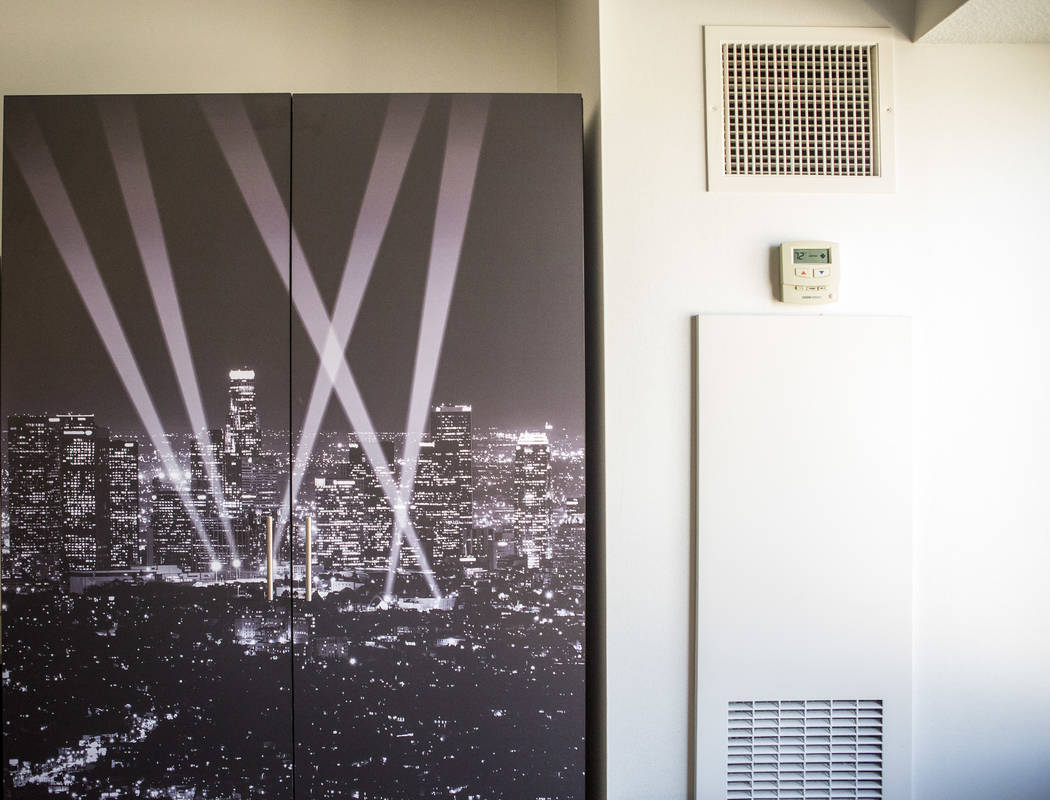 A decorative picture on the closet of a renovated standard hotel room at the Planet Hollywood Resort on Thursday, May 25, 2017. Patrick Connolly Las Vegas Review-Journal @PConnPie 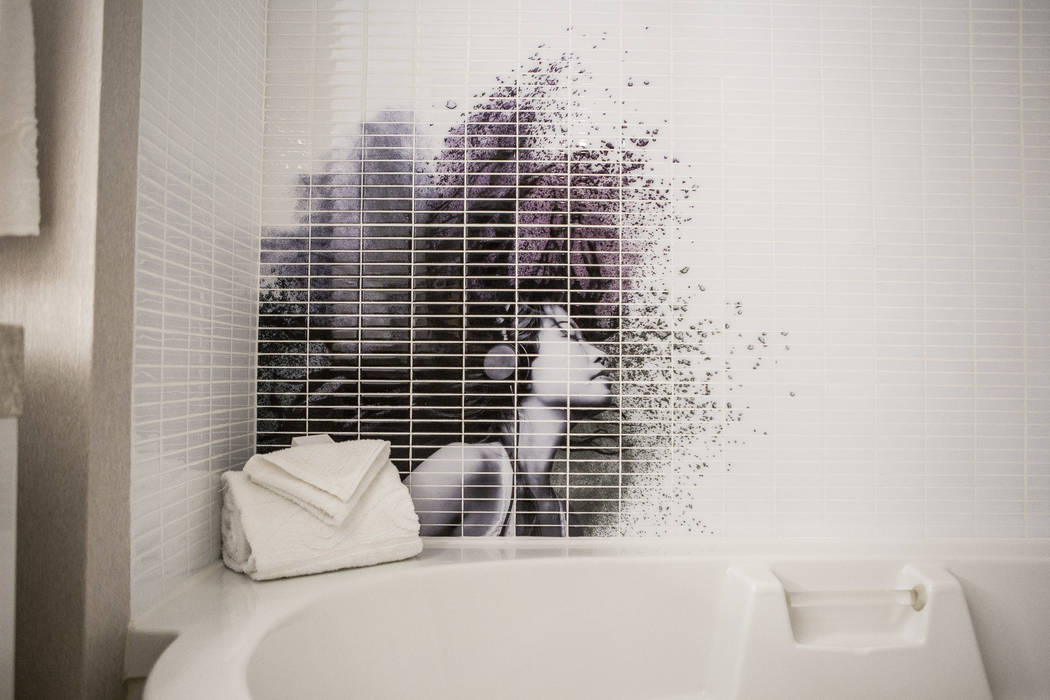 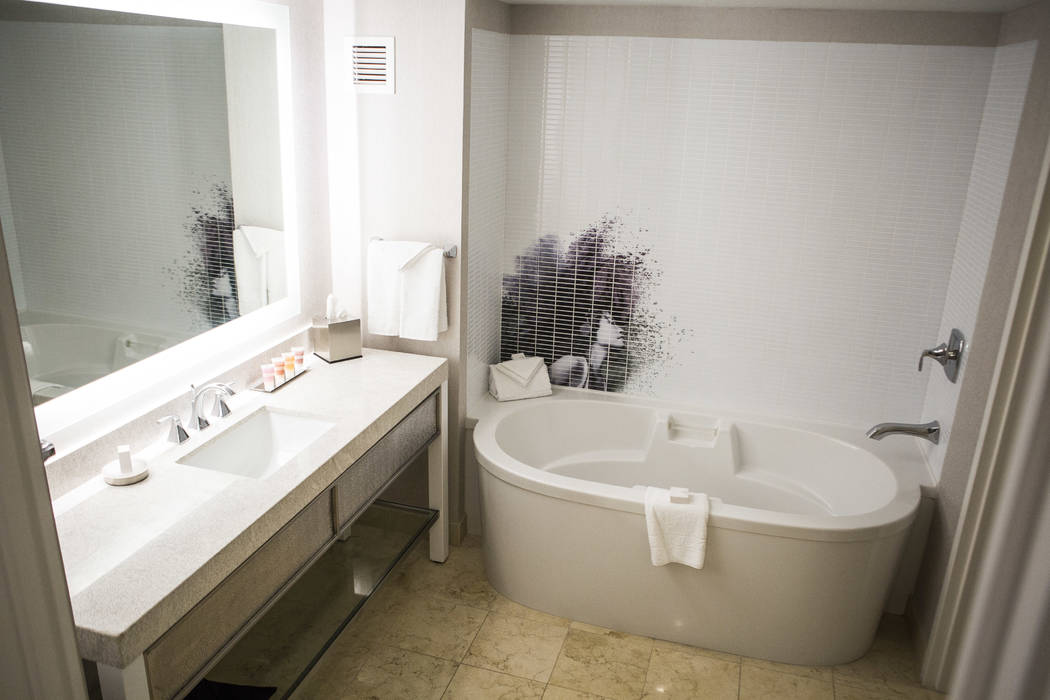 The bathroom of a newly renovated standard hotel room at the Planet Hollywood Resort on Thursday, May 25, 2017. Patrick Connolly Las Vegas Review-Journal @PConnPie 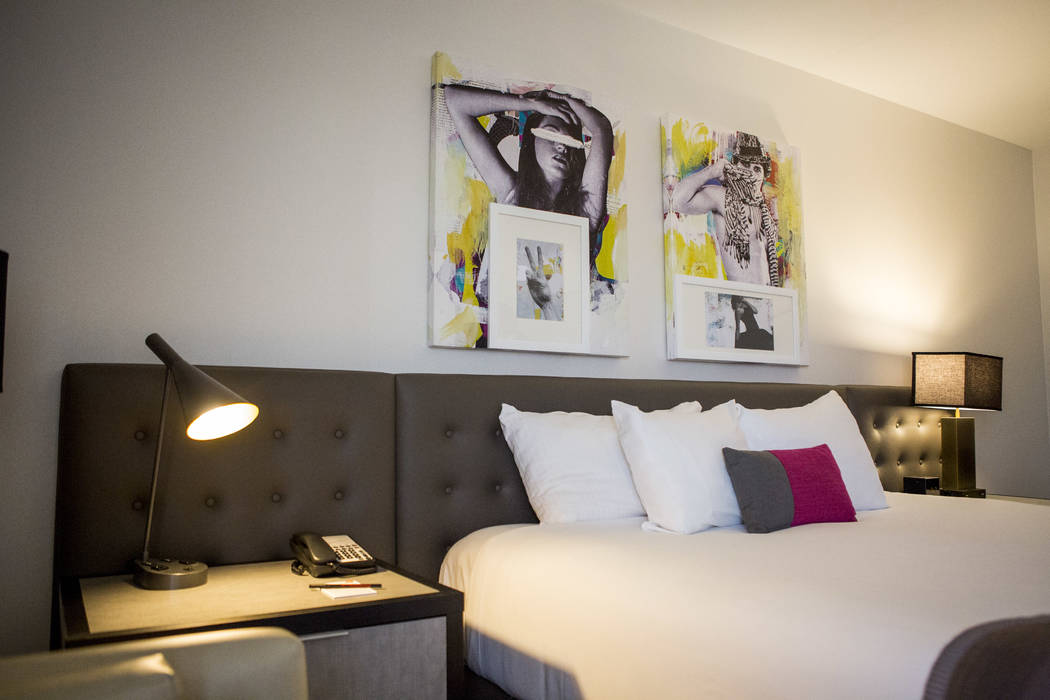 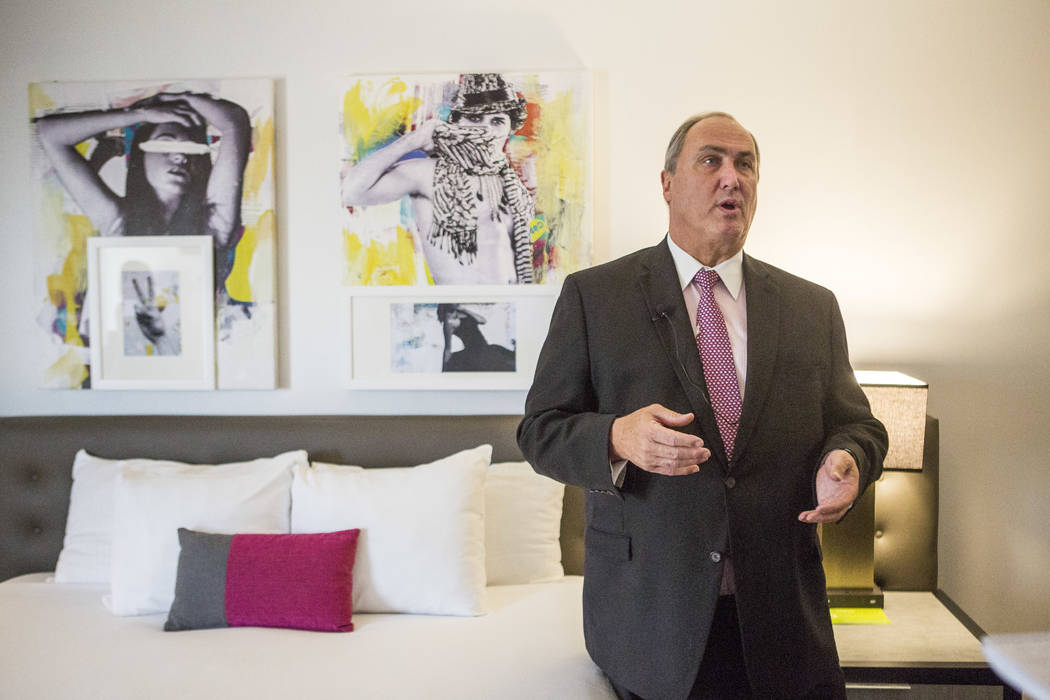 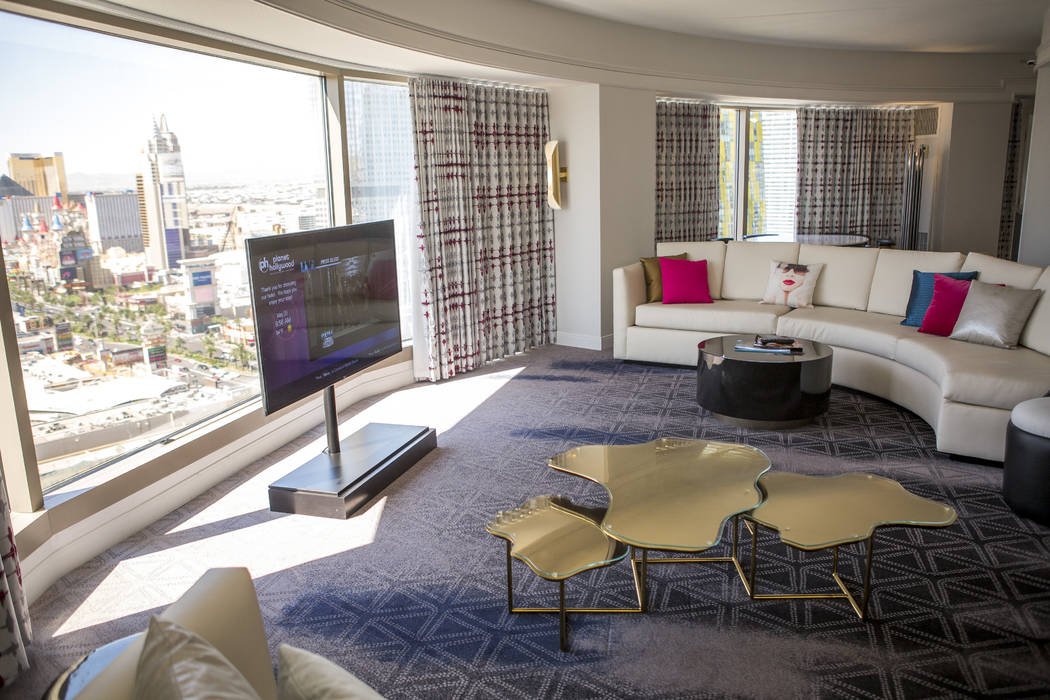 On a late May morning, a dozen construction workers dressed in hard hats and neon vests are hustling back and forth along a section of Planet Hollywood’s seventh floor, putting the final touches on its renovation and moving out equipment.

Two floors above, the face-lift of 87 rooms has just finished. Members of the housekeeping team are carrying out a final check to make sure items like hangers and tissue boxes are in place before the rooms are reopened to the public.

By Thursday, rooms on these two floors will be back on the market, ending a nine-month project to renovate all of Planet Hollywood’s 2,496 rooms. The completion represents a major milestone for Caesars Entertainment Corp., which is staking its financial future on Las Vegas room upgrades.

The hospitality giant is pumping roughly $350 million this year alone into upgrading 7,000 rooms, mainly in Las Vegas, where the company expects visitation growth to remain strong in the coming years, according to a new report by Oppenheimer. Room upgrades account for more than half of total capital expenditures in 2017.

Planet Hollywood, whose renovation cost likely exceeded $100 million, is the first of Caesars’ Las Vegas properties to have all the rooms completely renovated under the new program. Caesars will next tackle the Flamingo and Bally’s.

The current Planet Hollywood opened on the Strip as the new Aladdin in August 2000. Ownership soon changed hands and the hotel was re-branded as Planet Hollywood in 2007. Caesars took over the property amid the financial crisis in early 2010. The rooms at the Planet Hollywood were last remodeled in 2006.

“Our previous rooms were really dark and they weren’t open enough,” he said.

The white bathroom walls in the standard rooms feature portraits made of tile mosaics, including one of a young girl seemingly tossing her head back as she listens to headphones, sending her long hair into the air.

The closet doors are decorated with a full-size, night photo of a city skyline, breaking up the monotony of the white bedroom walls. Two canvasses with digital portraits and splatters of colorful paint adorn the area above the bed.

A black and gold carpet has been replaced with a “washed-out blue jeans” design, according to Opdyke. The panorama rooms feature a round bed, larger paintings and a zebra lamp.

Caesars is installing LED lighting, which consumes 60 percent less energy, in all properties it renovates.

While most of the material is sourced outside of Nevada, Caesars hires local contractors. About 60 percent of the cost of renovating a room is labor, said Opdyke.

Renovating a floor of rooms takes about seven weeks and “a battalion of workers,” said Opdyke, adding work is carried out between 10 a.m. and 6 p.m.

“It is pretty much a complete gut job — we go right down to the concrete. We have taken the bathroom tiles out, replaced the fixtures in the bathroom, all the carpets, as well as all the wall coverings and furniture.”

Guests are first checked out of the area scheduled for refurbishment on the same day. Those still staying in the hotel are moved to another room. Then house cleaning enters to remove all the blankets, sheets, pillows, toilet paper rolls and other pertinent items.

Next, a liquidator comes in to remove all the furniture. The liquidator recycles the mattresses and carpets and sells off the remaining items like lamps and televisions.

Once everything is stripped from the room, the construction workers come in with sledge hammers and demolish the bathroom. The plumping is reinstalled, wiring is upgraded, new sheet rock and tiling installed. Then the painting begins.

Keeping the project under control required a weekly meeting of between 15 and 20 people, including the general contractor, Bergman Walls, the furniture installation team, Caesars design, construction and IT teams, as well as front desk and housekeeping teams.

“There will be a ton of things that pop up” unexpectedly, said Opdyke, a 35-year hotel industry veteran who has overseen more than 10,000 room upgrades in his career. “Making sure that everyone communicates with everyone else” is essential.

Caesars reinvestment program approved in June 2015 foresees upgrading nearly 11,500 rooms in Las Vegas by the middle of next year.

The company spends on average about $50,000 to upgrade rooms, according to Oppenheimer analyst Ian Zaffino, who attended a recent investor presentation by Caesars Chief Executive Officer Mark Frissora.

That would imply more than $100 million for Planet Hollywood’s upgrade. The hotel declined to disclose the total investment cost.

Renovated rooms can fetch an additional $20 to $40 a night, according to Frissora. Planet Hollywood could thus generate an extra $16.5 million to $33 million a year in revenue based on the city’s current 90 percent occupancy rate.

Caesars’ massive Las Vegas renovation program has already helped lift its cash average daily room rate in the city from $119 in 2014 to $140 in 2016, an 18 percent increase that outpaced local competitors.

However that still lags its largest competitor MGM, which generated a room rate of $157.

“We think we have room for upside there,” Frissora said referring to Caesars average daily rate.

“The statistics of growth and development over the next three years [in Las Vegas] are fairly staggering” and should “drive continued ADR growth,” he added.