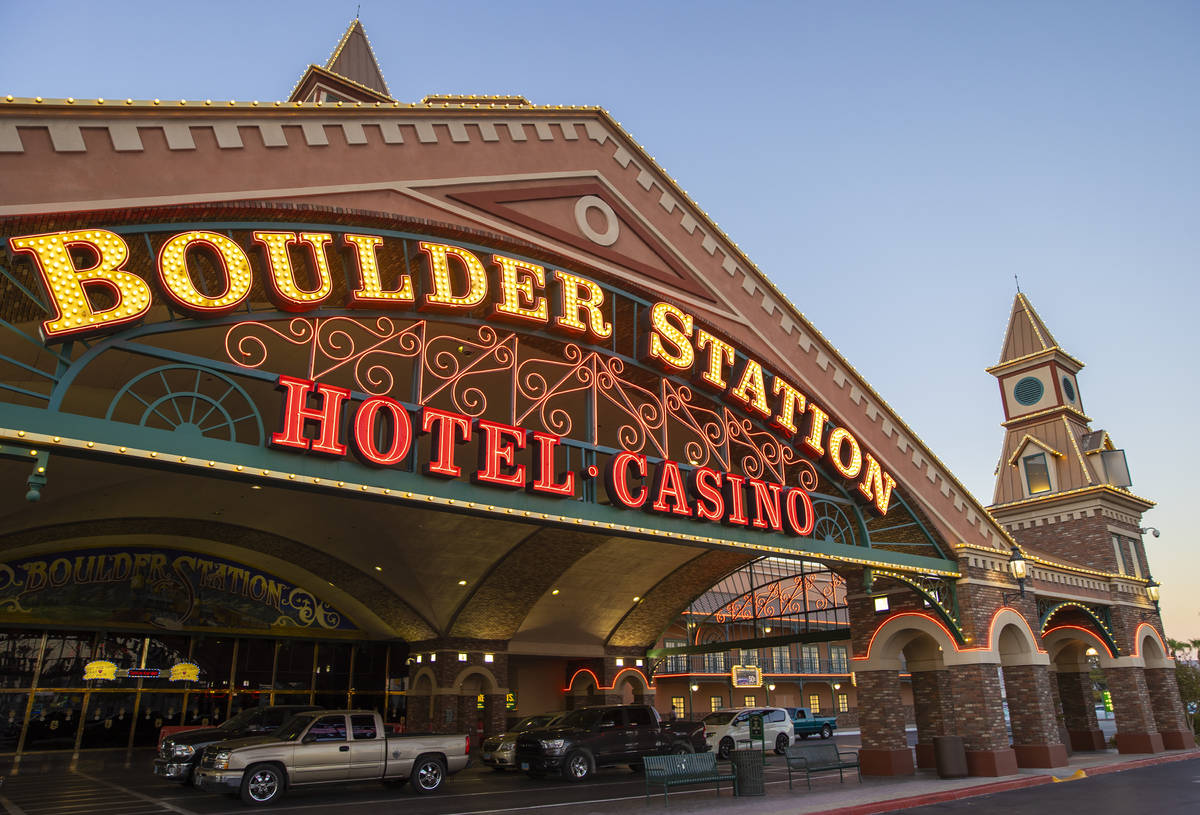 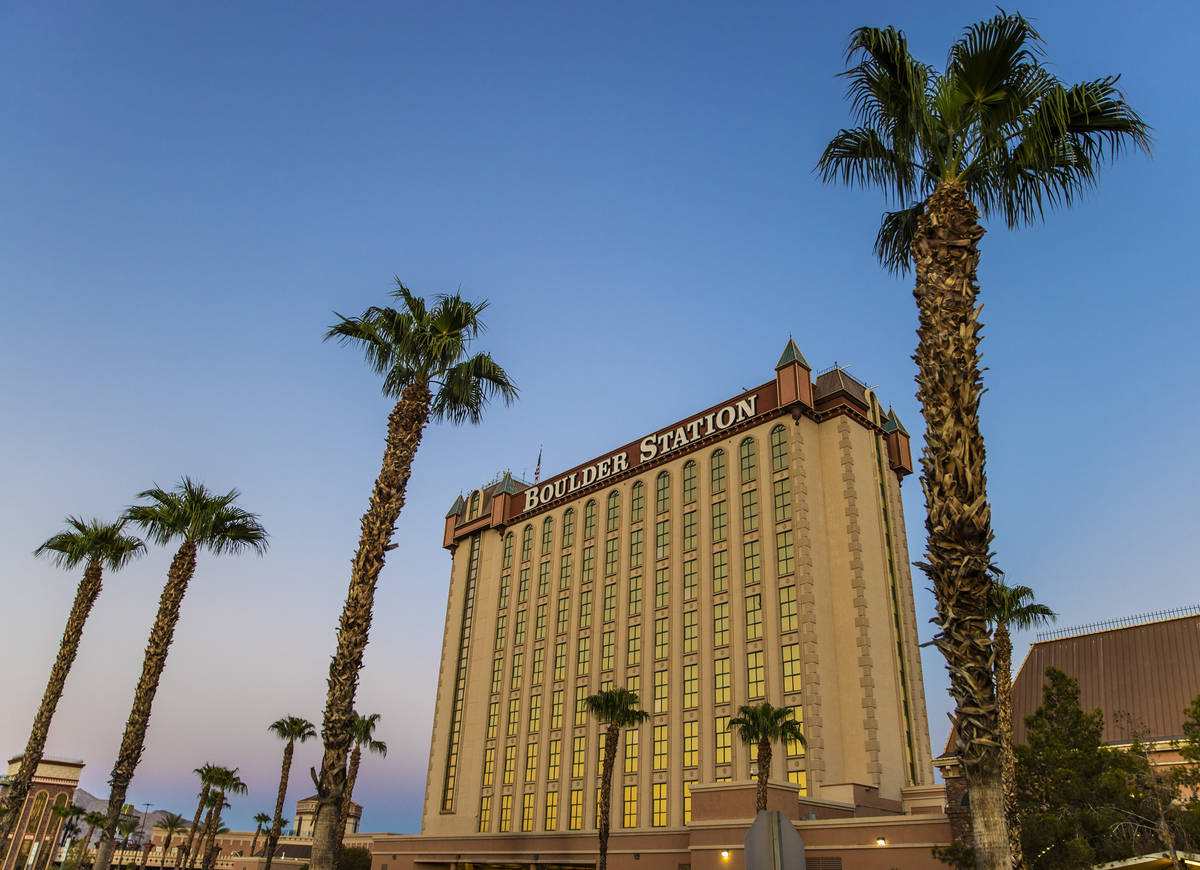 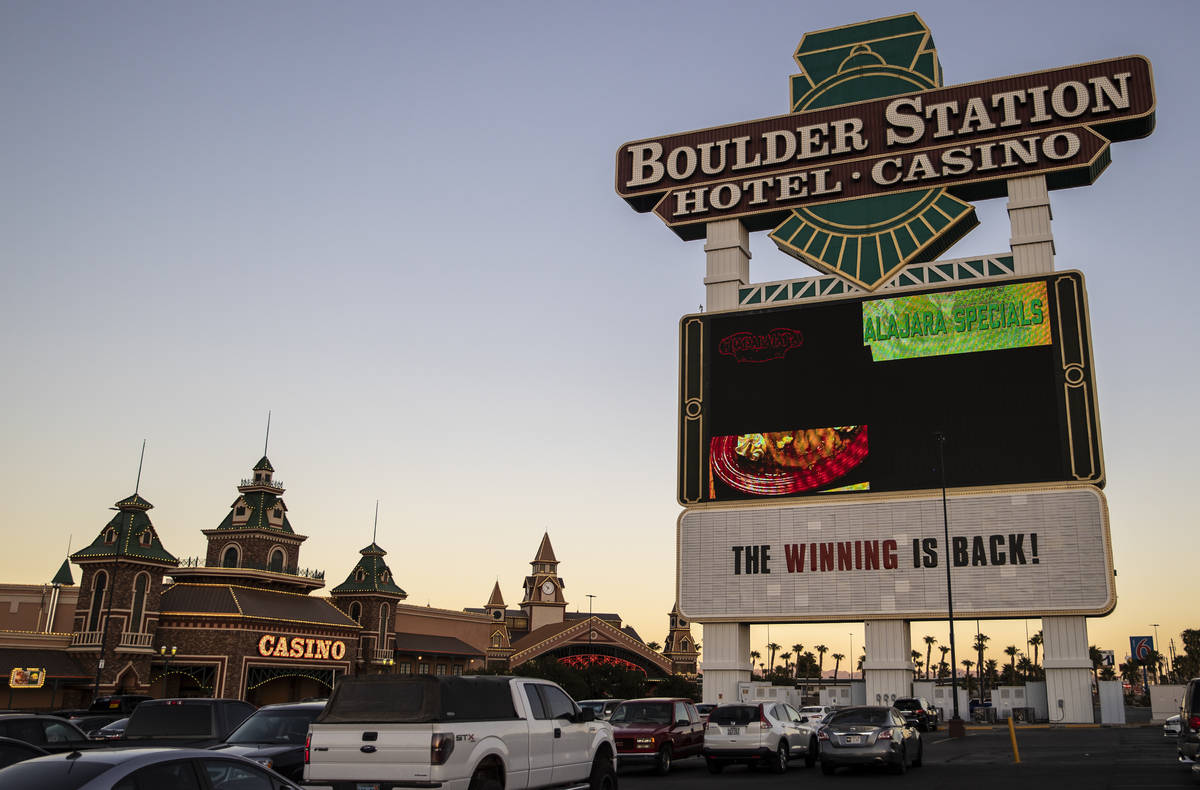 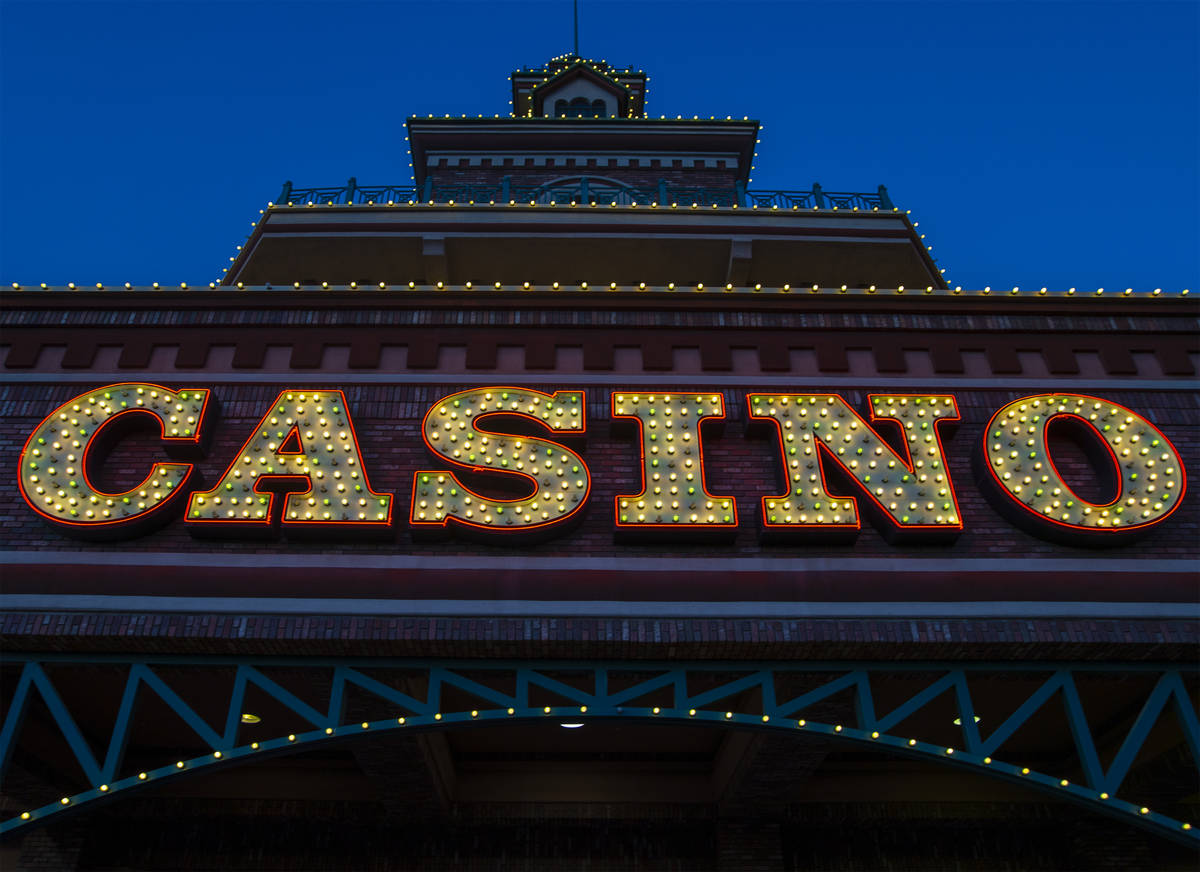 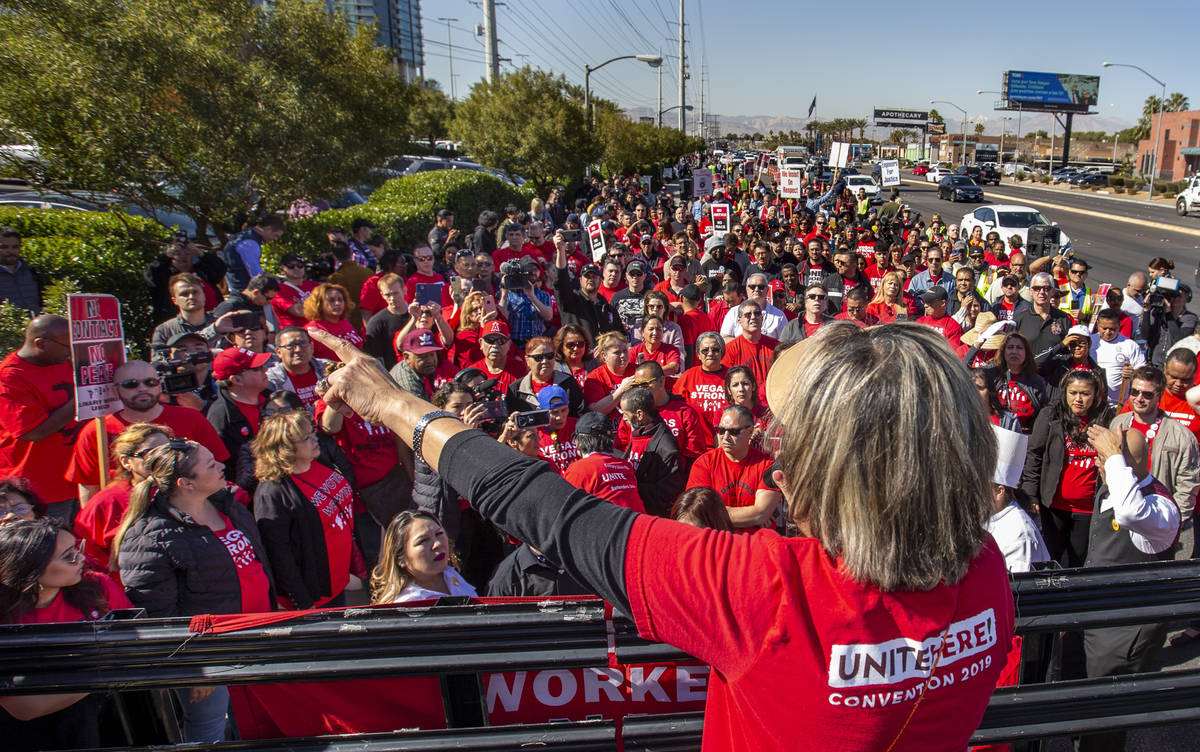 Culinary Union Local 226 Secretary-Treasurer Geoconda Arguello-Kline speaks on the street in front of the Palms to workers from seven Station Casinos properties after walking a picket line fighting for a union contract on Wednesday, Feb. 19, 2020, in Las Vegas. (L.E. Baskow/Las Vegas Review-Journal) @Left_Eye_Images

A number of Boulder Station employees say they’re fed up with the Culinary and Bartenders unions and have filed a petition to leave.

The labor fight over the hotel-casino is just one example of the back-and-forth between Station Casinos and the bargaining groups that has lasted more than a decade.

Experts aren’t sure when, or if, it’ll ever end.

“They’re locked in the battle to the bitter end,” said Bill Werner, an associate professor of hospitality at UNLV with a focus on labor relations. “They’re both absolutely determined to win.”

The decision to leave

It’s unclear how many Boulder Station employees were represented by the unions when the petition to leave was finalized in August.

Culinary Local 226 and Bartenders Local 165 gained representation of more than 570 workers at the property in 2016, when a majority of eligible workers at Boulder Station voted for unionization, according to Culinary union spokeswoman Bethany Khan.

But the unions had limited clout at the property, as a contract with Boulder Station was never signed. Workers never paid any union dues.

A contract would have allowed workers to join the Culinary union’s prized health care plan and make other changes within the property.

Workers “haven’t gained anything by being in the union,” Werner said. “Nothing has come from any negotiations. … It’s not entirely surprising that a majority now wants to leave.”

In early August, a majority of union workers at Boulder Station signed a petition requesting an end to representation from the Culinary and Bartenders unions, which represent roughly 60,000 workers in Las Vegas and Reno.

Workers who helped organize the petition said it took only five or six weeks to collect signatures.

One Boulder Station employee, who requested anonymity in fear of retribution from the Culinary union, said staff was tired of the union acting as a middleman between employees and the company.

“With (the union) gone, the open-door policy where we can actually go into our management team and talk to them now would be wonderful,” the employee said.

Another Boulder Station employee believed the union had failed to live up to the promises leaders had made in 2016.

“(They) offered too many things,” the worker said, pointing to health care plans and retirement benefits that never came to be. “In reality, we don’t need that. We have everything here.”

But the Culinary union isn’t giving up representation without a fight.

On Aug. 17, the union said it had filed an unfair labor practice charge against Station Casinos, alleging the company had withdrawn union recognition unlawfully.

The union declined to provide further comment on the pending case.

The petition is just the latest development in the discord between Station Casinos and the union.

In 2010, employees signed a petition asking the company to be neutral and agree to a fair process as they decided whether to unionize. Before the petition, the Culinary union had tried unsuccessfully for years to organize Station Casinos properties.

Companies and unions can argue that the fight over unionizing is about workers’ rights, but there are additional incentives for both sides.

Union employees are often costlier than their nonunion counterparts. Private industry employers spent an average of $48.57 per hour worked by union workers in March, compared with $34.16 on nonunion workers, according to the latest data from the Bureau of Labor Statistics.

A union’s presence in a company also gives a it less power to deal directly with their workers with matters such as changing wages or workplace policies.

“The more employees in (a union’s) health plan, the more bargaining leverage they have with providers,” Werner said.

Representation at Station Casinos would add thousands of members to the Culinary and Bartenders unions. The company had roughly 14,000 employees as of Jan. 31, according to filings with the U.S. Securities and Exchange Commission, but has since laid off an unknown number.

None has agreed to a union contract.

“They’ve been absolute adversaries,” Werner said of the union and Station Casinos.

Efforts to finalize contracts haven’t gone far at Station Casinos properties. The company has frequently refused to bargain, often maintaining that the union engaged in “objectionable conduct” during its campaign to unionize.

The federal agency that enforces labor laws says it’s an unfair labor practice to refuse to bargain, but some consider the penalties for companies and unions that refuse to do so a slap on the wrist.

The National Labor Relations Board rarely orders monetary fines for companies that refuse to bargain. Instead, companies are ordered to put out notice that acknowledges that it had violated federal labor law, apologizes for their actions and states they agree to not do it again.

“The penalty under the National Labor Relations Act is nothing,” Werner said. “If there’s no penalty, then why do you expect them to follow the law?”

It’s a common argument against the board’s system, but attorney Christian Gabroy of Henderson-based Gabroy Law Offices said companies he has worked with take these rulings seriously.

“It is a big deal,” he said, adding that some cases could lead to fines or attorney fees.

The NLRB issued decisions in 2019 that found Palms had unlawfully refused to recognize and bargain with the unions and ordered the property to cease and desist.

The board issued a similar decision with Green Valley Ranch Resort in 2018.

Three Boulder Station employees said they had wanted to leave the union for years and were motivated to collect petition signatures after Station Casinos took action to protect workers during the coronavirus pandemic and casino closures.

“The majority of us feel that there’s no need for the union in this place,” one employee said. “(The company’s) doing right by us.”

Station Casinos has argued that it offers competitive benefits to its workers and in February launched an upgraded benefits program with free health care and a 401(k) program to eligible employees. The company also broke ground on two health clinics this month that will offer free doctor visits, lab work and generic drugs to employees and their family members who are enrolled in the company health care plan.

The company laid off roughly 39 percent of its full-time workforce earlier this year because of the pandemic, but it has implemented worker protections in other areas.

Station Casinos took a lead with COVID-19 testing efforts, announcing in May that it would test workers before they returned to the job. It was one of only three Las Vegas operators to pay its employees for a large portion of the shutdown, offering full-time workers regular pay and health benefits from March 17 through May 15. Only one of those companies, Wynn Resorts Ltd., has a union contract covering a portion of its employees.

Also, Chairman and CEO Frank Fertitta III and Vice Chairman Lorenzo Fertitta agreed to forgo their salaries to help the company amid the crisis.

Meanwhile, workers at union-represented companies such as MGM Resorts International and Caesars Entertainment Inc. faced mass furloughs shortly after the shutdown began. The union urged states to persuade companies to pay workers during shutdowns and ended up announcing new agreements with both companies that extended family health benefits and included two-year recall rights for union workers. The announcement came the same day MGM laid off 18,000 workers, roughly a quarter of its domestic workforce.

As of July, the Las Vegas metropolitan unemployment rate was at 16.4, with a large portion of those employees in the leisure and hospitality sector.

Gabroy said furloughs, layoffs and other turmoil caused by the pandemic has led to employees across the Las Vegas Valley growing frustrated with the union.

“I can’t tell you how many times I hear (workers say) that the union hasn’t done anything for me,” he said. “The union, in this type of context, can’t really do much. The economy is just bad.”

Still, not all Boulder Station employees are ready to say goodbye to the union.

Julie Wolfe, who has worked as a cocktail waitress at Boulder Station the past 19 years, voted for unionizing in 2016. She said it’s “horrible” the company is fighting unionization efforts.

“They should be negotiating with us and they should have agreed to a contract a long time ago,” she said.

Wolfe said she is certain the property will get a union contract some day, but time will tell.

“(Station Casinos and the union) both have shown no sign that they’re ever going to give up,” Werner said. “I would expect it goes on for many more years.”