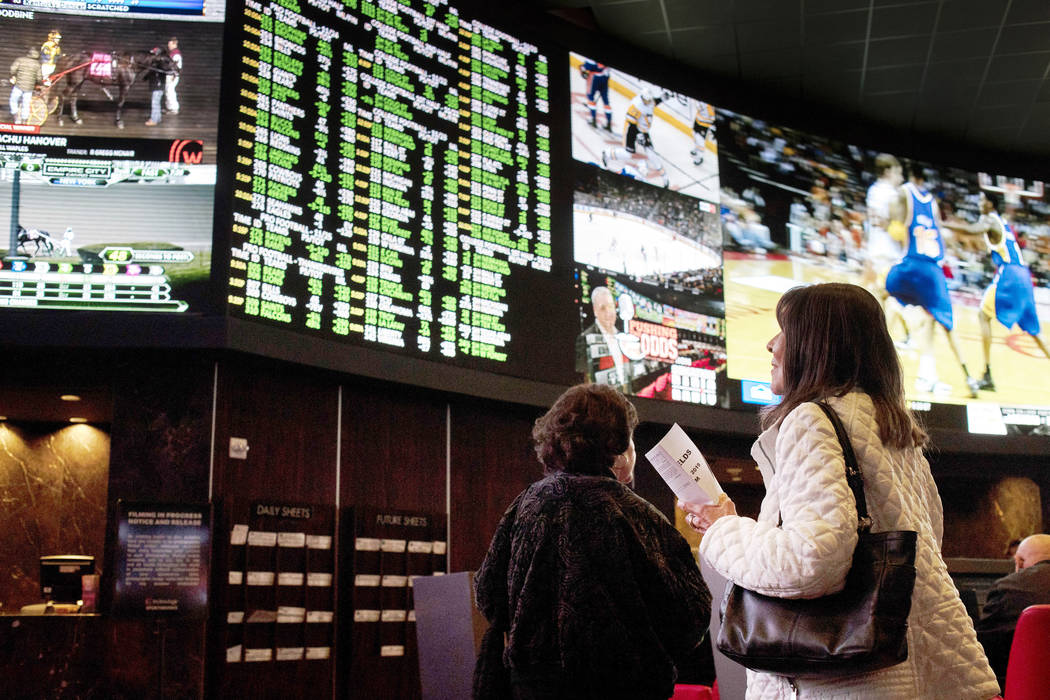 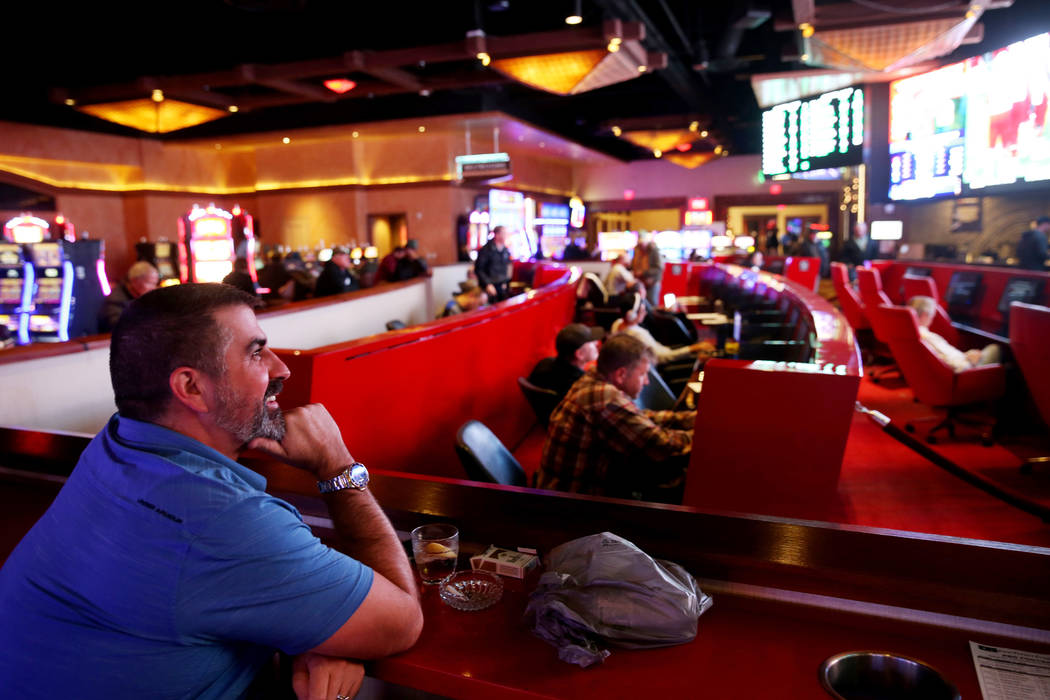 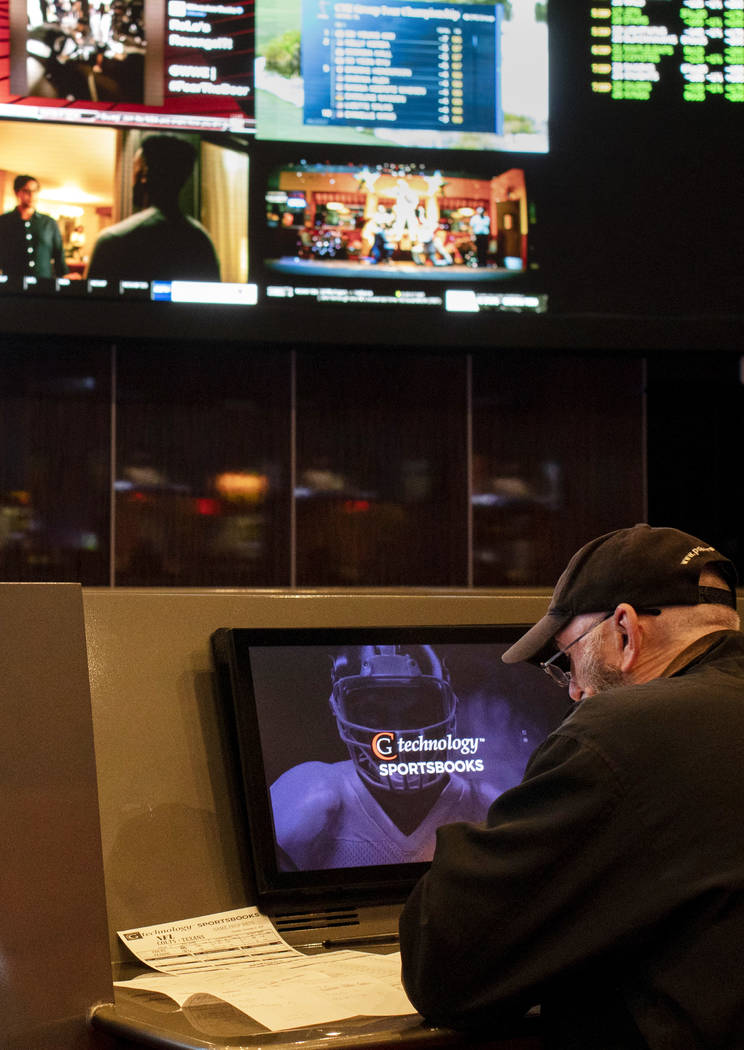 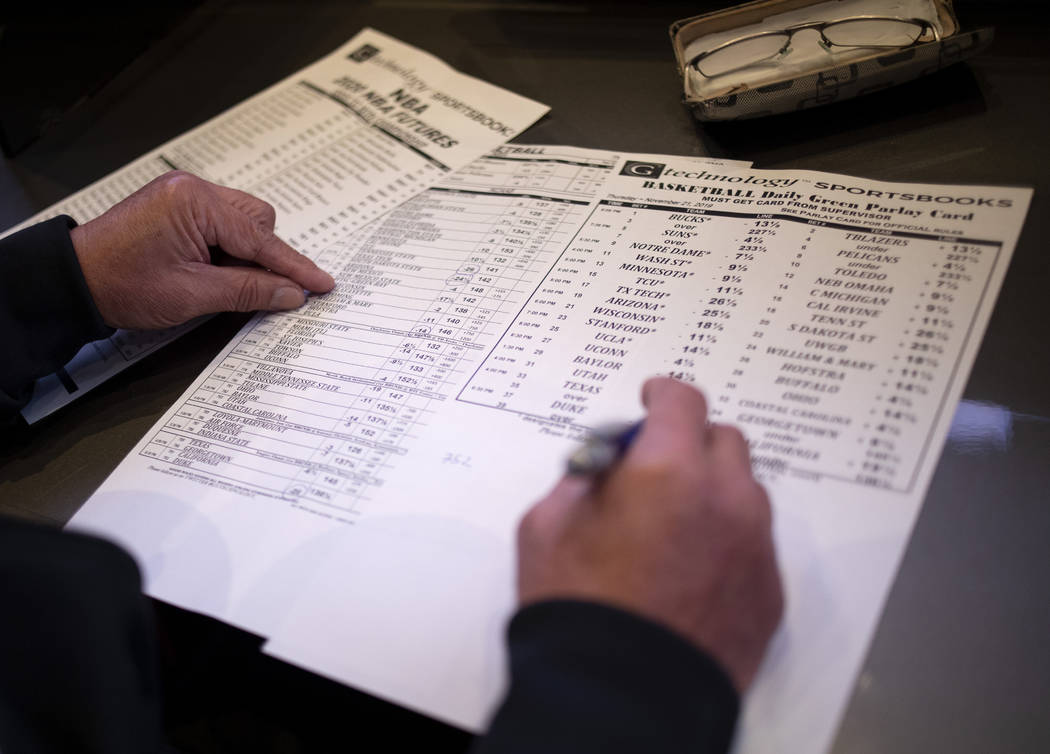 A gambler places a bet at the Palms sportsbook on Thursday, Nov. 21, 2019, in Las Vegas. (Ellen Schmidt/Las Vegas Review-Journal) @ellenkschmidt_ 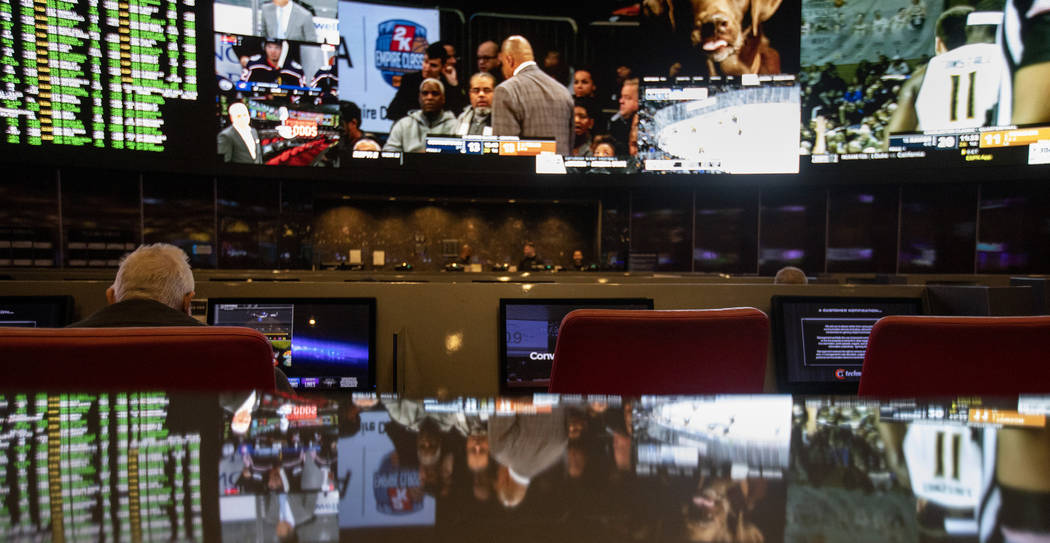 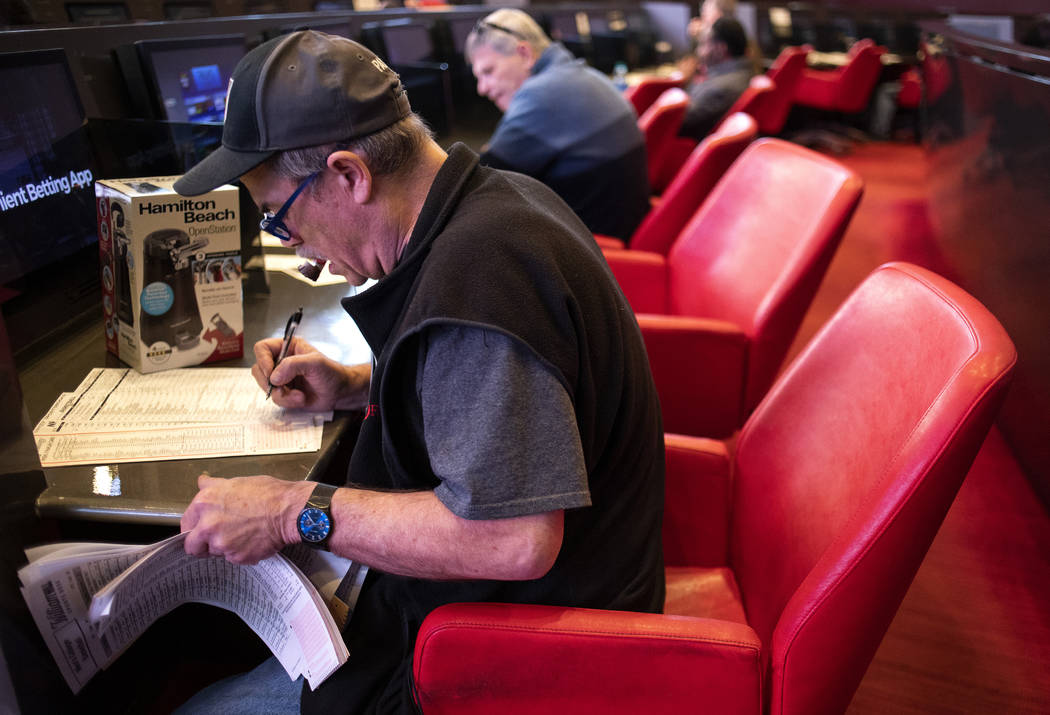 Tom Schiffhauer of Las Vegas places a bet at the Palms sportsbook on Thursday, Nov. 21, 2019, in Las Vegas. Schiffhauer said he will bet on basketball, hockey and football that day. (Ellen Schmidt/Las Vegas Review-Journal) @ellenkschmidt_ 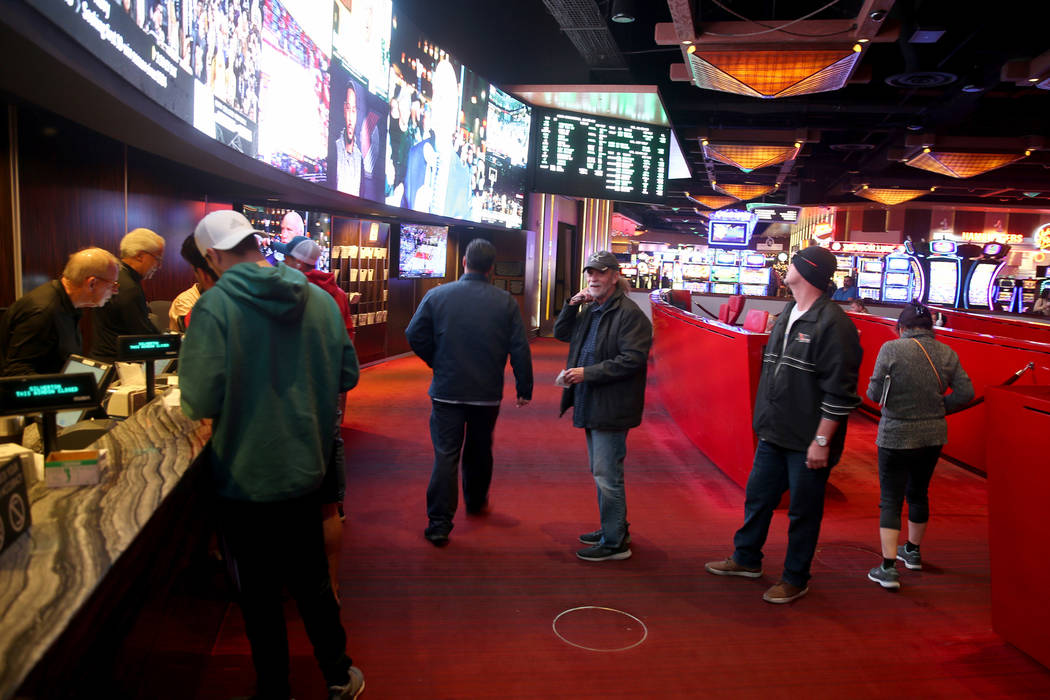 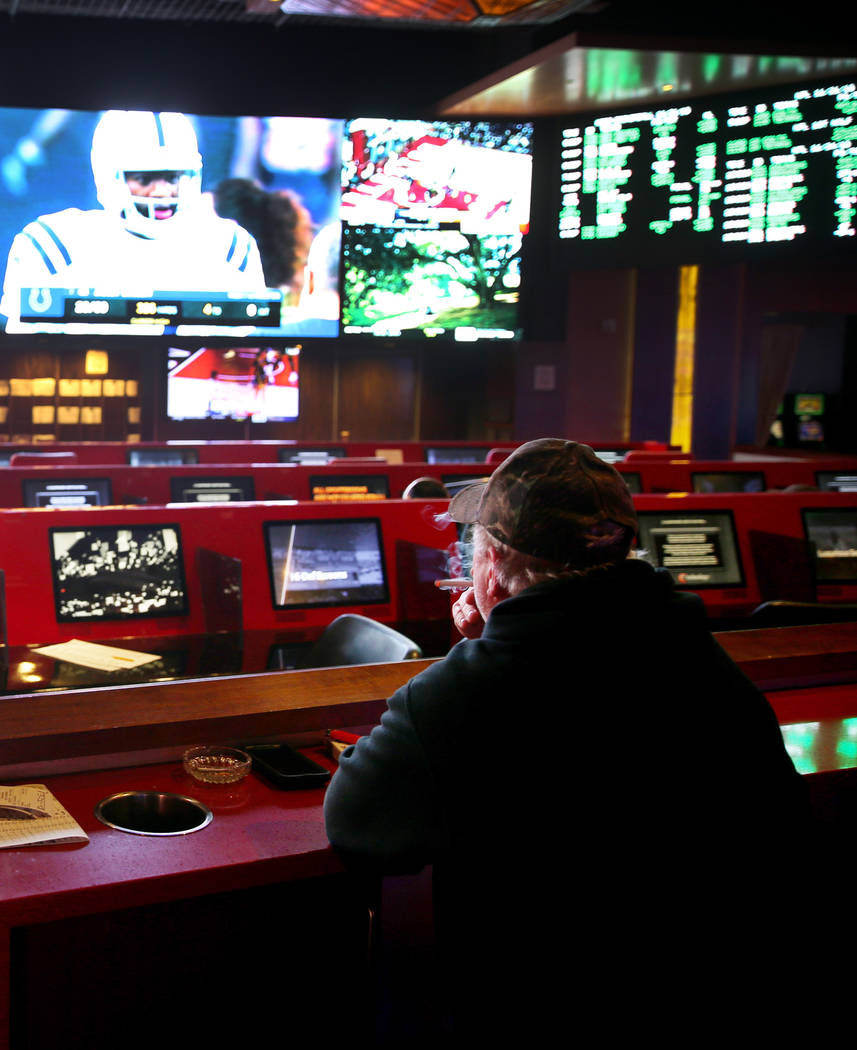 The deal between William Hill and Las Vegas-based CG Technology would transfer the sports betting leases at The Cosmopolitan of Las Vegas, The Venetian, Palazzo, Palms, Tropicana and Silverton to William Hill. It would also provide a betting platform and risk management consulting to the Atlantis on Paradise Island in the Bahamas.

“In regards to mergers and acquisitions, this is only the beginning,” said Brendan Bussmann, a partner at Global Market Advisors.

Part of the bigger picture

Tony Cabot, a UNLV professor and a former gaming attorney, said the sports wagering industry is one that “benefits greatly” from consolidation. Because each operator has fixed costs to run a sportsbook, adding more properties or customers has little effect on operating costs.

“It makes sense for the sports betting industry to consolidate,” Cabot said. “The more customers you have, the more you can spread your costs and increase profitability.

Eilers & Krejcik Gaming analyst Chris Grove said he expects to see “a lot of consolidation” at most levels of the sports betting industry, including suppliers and operators.

That poses an additional challenge to new operators, who already face licensing and regulatory hurdles, along with high costs to market entry. The operators that have already gone through a series of acquisitions and are able to compete in a national market — operators like William Hill — have a huge advantage.

“Realistically, only the largest companies with the deepest pockets have chances of succeeding,” Grove said.

Shifts in the business

CG Technology — previously known as Cantor Gaming — arrived in Las Vegas in 2009, and was one of the biggest players in the market at the time.

It was the first sportsbook operator to launch a mobile gaming app and pioneered in-play wagering. In 2014, it estimated it controlled more than 30 percent of the Nevada sports wagering business and processed over 50 percent of technology-based wagers.

“They were innovative,” Bussmann said.

Meanwhile, William Hill hit the ground running in the Nevada market. In 2012, it became the first European operator to be awarded a full gaming license in Nevada, formed William Hill US and acquired three Nevada sports-betting companies for about $49 million.

The company has continued to expand at a rapid pace. Earlier this year, William Hill reported that it was the largest operator of land-based sportsbooks in Nevada, running 109 of the 191 casino in the state and taking in 32 percent of the market share’s revenue.

“William Hill has been a very well-established, very aggressive company, and I think that this is just indicative of their strategy to acquire as much market share in as many markets as possible,” Cabot said. “Ultimately, when the competition shakes out, they will be one of the surviving companies.”

Grove said the deal also made a lot of sense for CG Technology, which has been the subject of acquisition rumors for years.

The company’s past regulatory issues could have been a factor in its decision to sell. The Nevada Gaming Commission fined the company $8.8 million between 2014 and 2018 for three regulatory violations, including the second-highest fine ever assessed, $5.5 million in 2014.

“That was a distraction for the company,” Grove said.

As for what happens next for CG Technology, the answers aren’t quite clear. Along with its sports betting leases, Cabot said the company had a significant intellectual property portfolio. The announcement Wednesday did not say what the company planned to once the purchase agreement — which is subject to regulatory approval — is closed.

“They certainly are no longer the company they were prior to the deal,” Grove said.

Wednesday’s announcement also did not address CG Technology’s planned expansion into New Jersey, which was announced in February. That deal was set to start this year and offer online and mobile sports betting. William Hill already has a retail and mobile sports-betting presence in New Jersey.

Impact on the bettors

Continued consolidation could be bad news for casinos, which face a dwindling pool of options when choosing a third-party sportsbook operator.

“That could result in higher prices,” Cabot said.

Grove said he doesn’t expect this consolidation trend to hit bettors, though — at least, not anytime soon.

“You still have a lot of distinct operators and a lot of distinct platforms,” he said. “At a point, if it over-consolidates, consumer choice is impacted … Then, illegal sports betting positions could look a lot more attractive.”