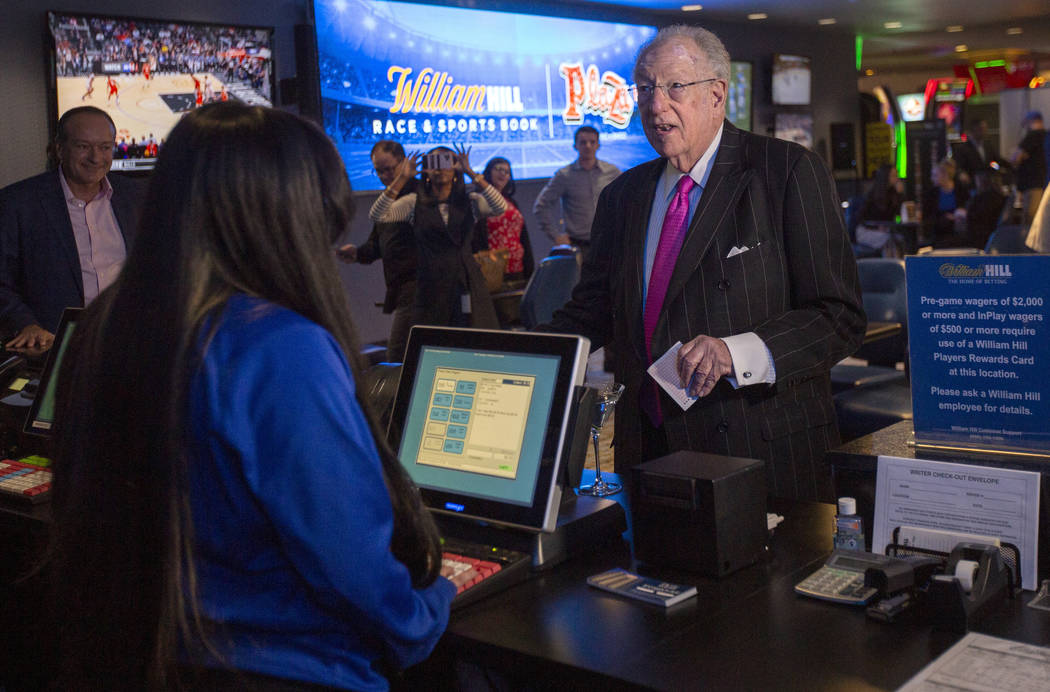 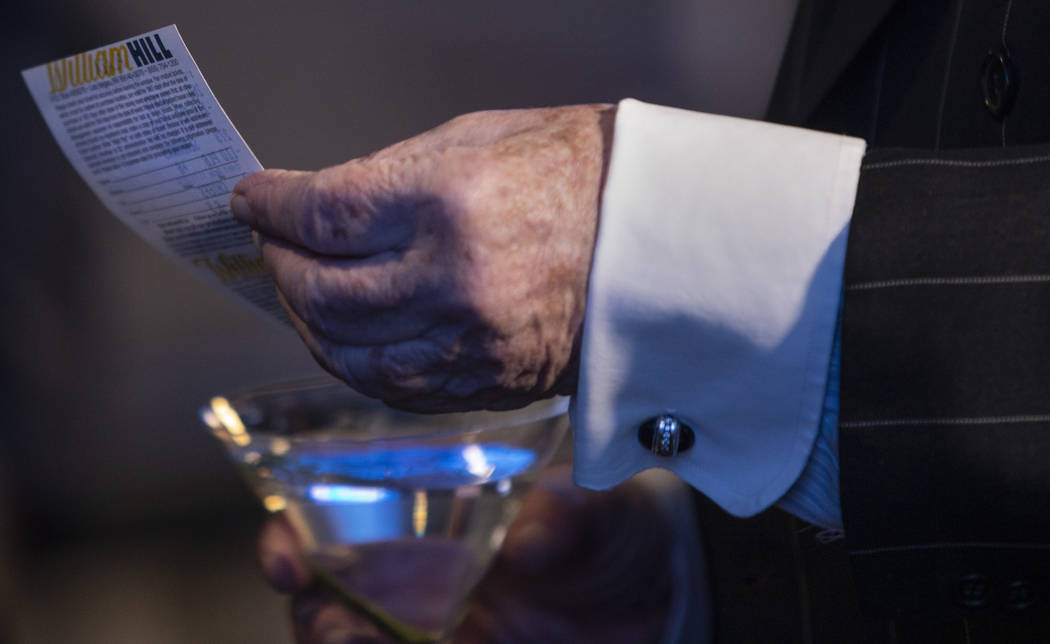 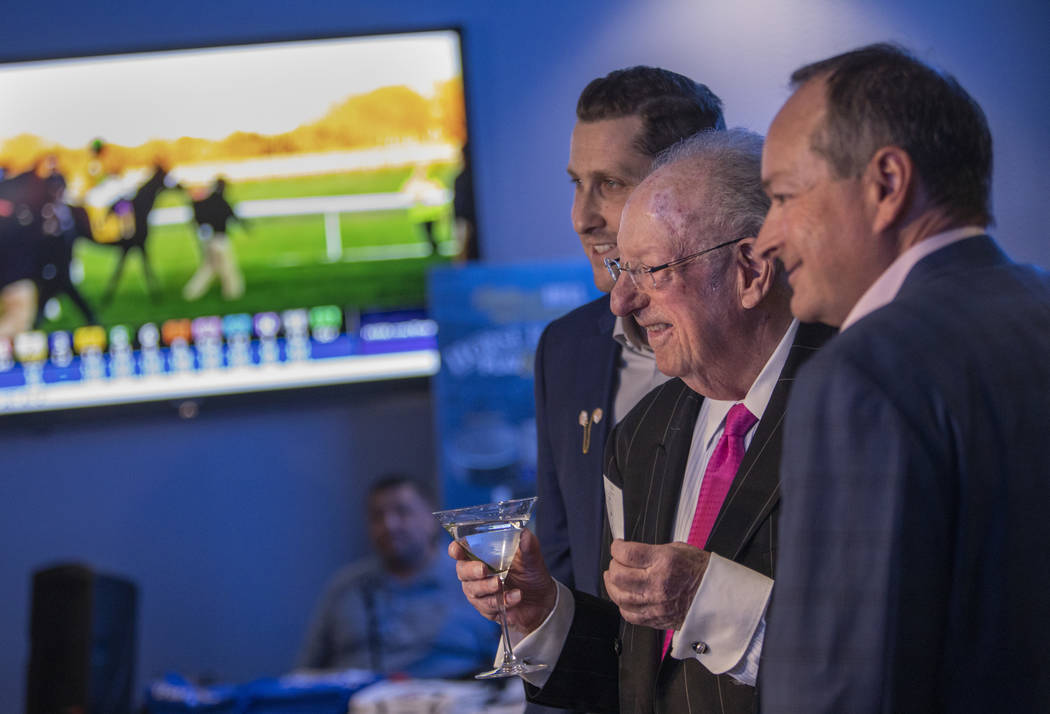 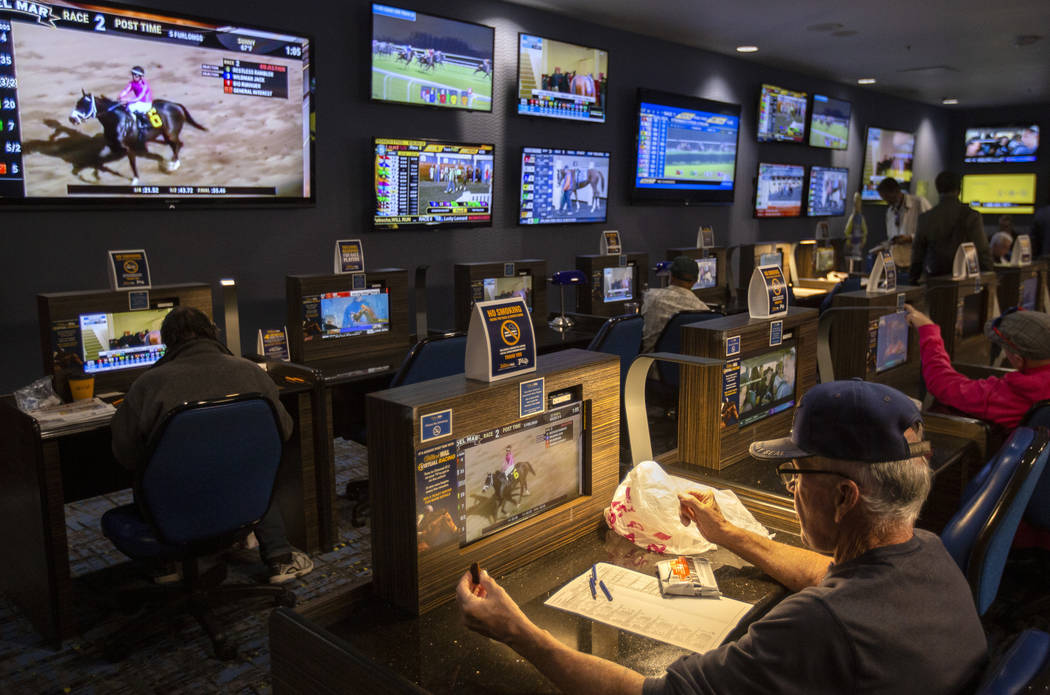 William Hill Race & Sports Book is open for betting on Friday, Nov. 8, 2019, at the Plaza Hotel & Casino in Las Vegas. The facility, which first opened in 2013, was remodeled with an 80-square-foot video wall and updated technology. (Ellen Schmidt/Las Vegas Review-Journal) 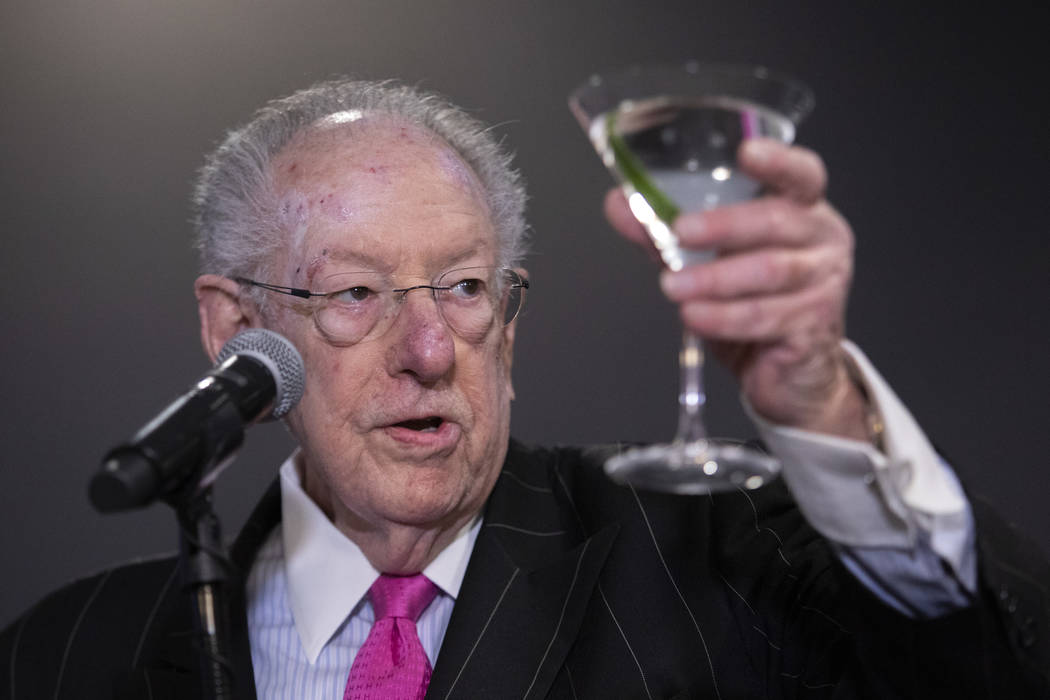 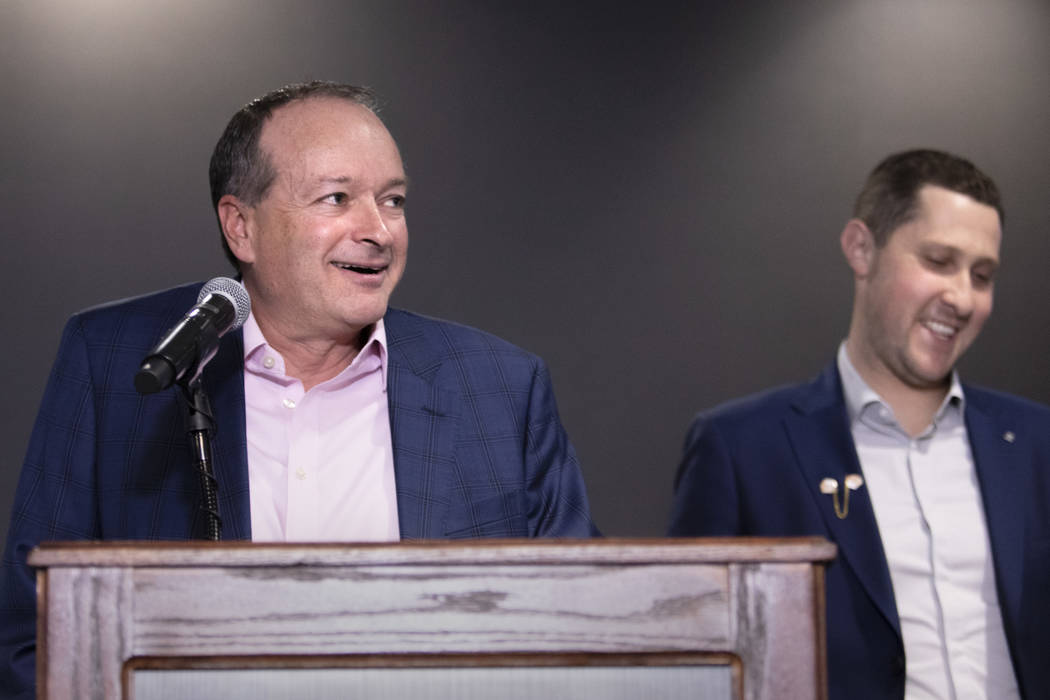 Joe Asher, CEO of William Hill US, introduces the newly remodeled William Hill Race & Sports Book next to Plaza CEO Jonathan Jossel on Friday, Nov. 8, 2019, at the Plaza in Las Vegas. The sports book first opened in 1975 and was taken over by William Hill US in 2013. The current update includes a 80-square-foot video wall. (Ellen Schmidt/Las Vegas Review-Journal) 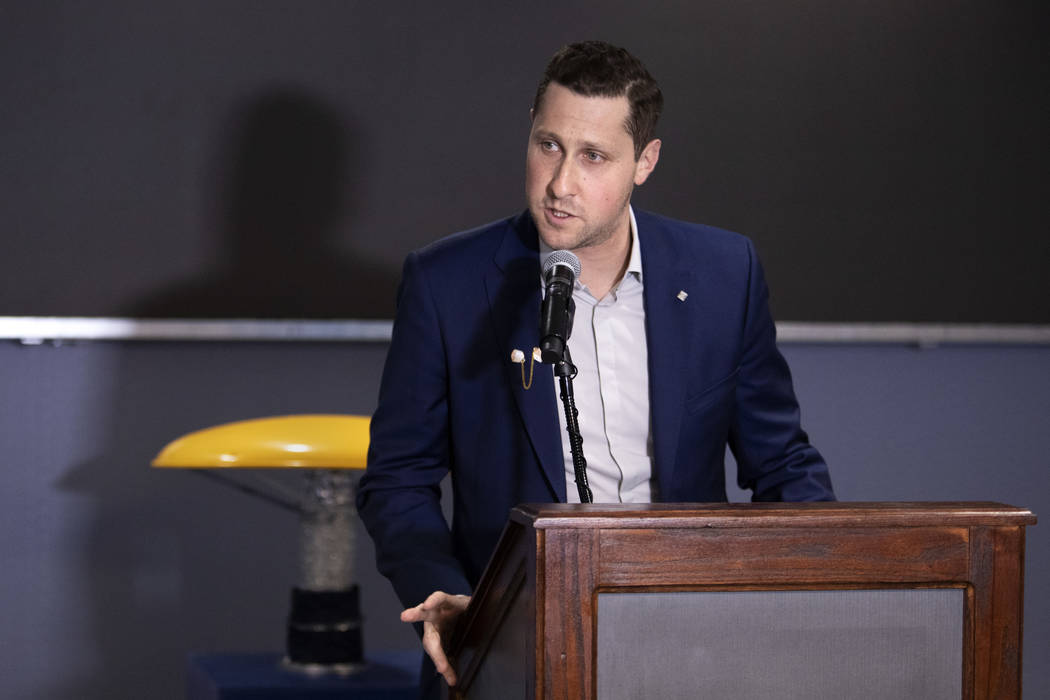 Jonathan Jossel, CEO of the Plaza, speaks at the unveiling of the William Hill Race & Sports Book's remodel on Friday, Nov. 8, 2019, at the Plaza in Las Vegas. The new book features a video wall that has more than 80 square feet of viewing area. (Ellen Schmidt/Las Vegas Review-Journal) 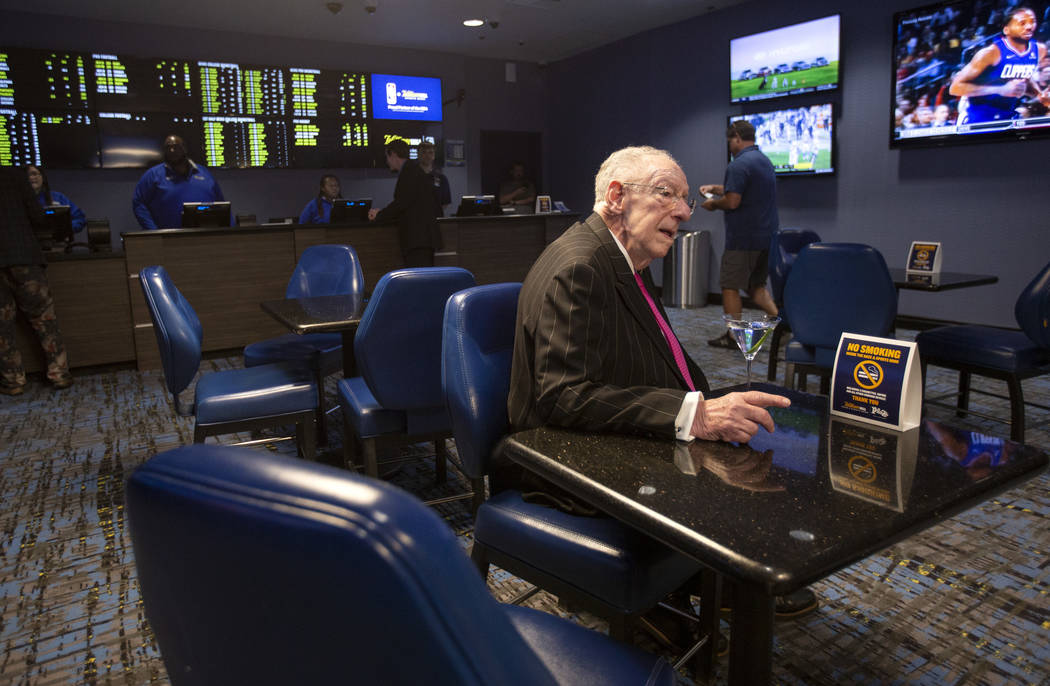 The three “turned on” an HD video wall, the largest in downtown Las Vegas, measuring 5-feet-by-16.5-feet wide with a viewing area of more than 80 square feet.

The book, which also received an updated look and feel, also offers bettors access to William Hill’s mobile app, kiosks and InPlay wagering menu as well as Plaza restaurants and entertainment options. The book at the Plaza opened in 1975 and is the longest continuously operating sports book in the city, Asher said in the release

“When William Hill took over operations in 2012, we wanted to provide the best race and sports experience to bettors and have worked alongside our partners at the Plaza to ensure that holds true today,” he said. “These improvements and updates cement the Plaza as one of the best places to watch a game Downtown.”