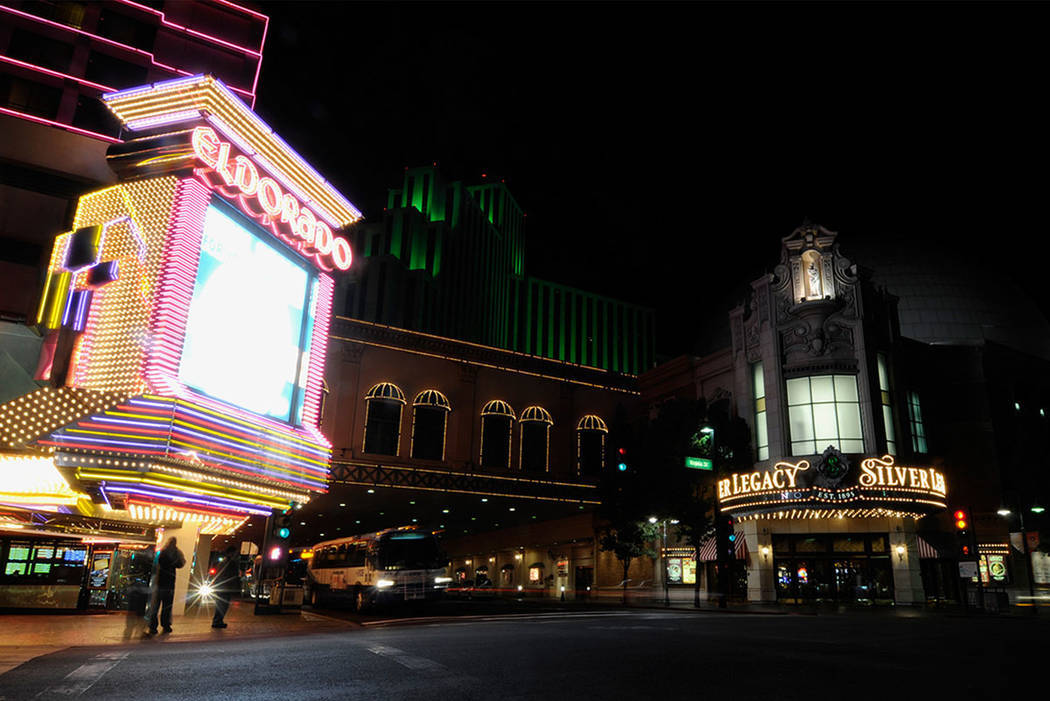 Pedestrians wait to cross the street from the Eldorado Hotel and Casino to the Silver Legacy Resort and Casino in Downtown Reno, in 2008. (Las Vegas Review-Journal)

Eldorado Resorts Inc. is selling three of its regional properties, a move some analysts believe is a sign the casino company gearing up for an acquisition.

On Monday morning, the Reno-based company announced the sale of three properties for $385 million. After the sale, the company will own 23 properties in 12 states.

Some analysts say the move is a house cleaning measure, while others say this could be the company preparing to acquire Caesars Entertainment Corp.

Eldorado has agreed to sell Isle Casino Cape Girardeau and Lady Luck Casino Caruthersville in Missouri, as well as its Mountaineer Casino Racetrack and Resort in West Virginia.

Colorado-based Century Casinos Inc. is set to pay $107 million for the operating assets, and New York City-based VICI Properties Inc. will pay $278 million for the land and real estate assets. The transaction is expected to close early next year.

Eldorado CEO Thomas Reeg said the sale falls in line with the company’s focus on generating growth through acquisitions and realizing value through sales.

“Eldorado will continue to benefit from our geographically diverse portfolio of regional gaming assets that we believe have potential for further margin growth and increased cash flow,” he said in a statement.

According to a report led by J.P. Morgan analyst Daniel Politzer, the sales allow Eldorado to take in more cash and eliminate concerns about market dominance.

“It gives (Eldorado) a little more capacity for possible M&A,” Politzer said in the report, which singled out Caesars.

Union Gaming analyst John DeCree said he believes the property sale is simply Eldorado cleaning up smaller assets in its portfolio, and is independent of any rumors relating to a Caesars acquisition.

“They’ve gotten a lot bigger, and they had properties in their portfolio that just required too much time and effort,” he said.

DeCree noted that $385 million is a relatively small transaction if the company is looking for more cash to buy Caesars. In April, Caesars — the largest casino operator in the country — was valued at $4 billion.

The sale “just really doesn’t move the needle all that much,” DeCree said.

After years of major consolidations within the casino industry, DeCree said Eldorado’s sales could be part of a trend of larger companies looking to sell smaller assets.

He said Century Casinos, for example, will double the size of its earning capabilities after its purchase of the three Eldorado properties. The international gaming company develops, owns and operates small to mid-sized casinos in mid-tier markets, and will own 18 casinos following this transaction.

But Politzer indicated the sale could also benefit Eldorado in the event of an acquisition.

The sales lessens the potential overlap with Caesars in Missouri and would reduce its footprint in the state from five properties to three, helping to limit the competition among its own properties.

If Eldorado were to acquire Caesars following this sale, the combined company would have four properties in Missouri instead of six.

“That addresses some FTC (Federal Trade Commission) concerns around that state,” said Jonas.

He said four properties are “more digestible by the regulators and FTC,” but it’s “hard to say” whether the sale implies an imminent Caesars transaction.

Back in February, Reeg said told analysts in an earnings call the company is “pretty good at buying assets that other people are running,” and is going to remain active in buying companies.

Politzer also said the sales are consistent with Eldorado’s strategy to sell smaller, non-core assets that generate less than $20 million.

If Eldorado continues this strategy, Politzer expects the company could potentially look to sell MontBleu and Tropicana Laughlin in Northern Nevada, as well as Isle Lula, Tropicana Greenville and Lady Luck Vicksburg in Mississippi and the Belle of Baton Rouge in Louisiana.