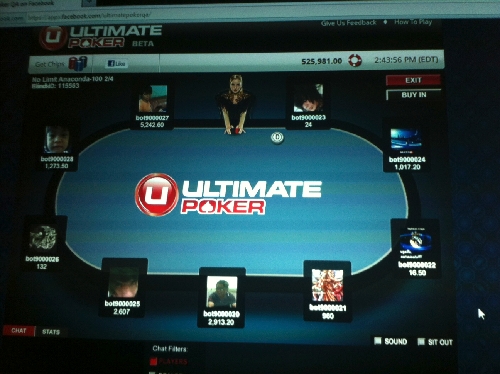 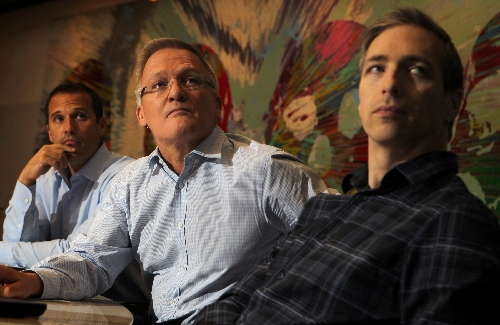 Fertitta Interactive LLC on Tuesday announced it will launch its real-money and social gaming company, Ultimate Gaming, an online gaming business it has been developing since its October acquisition of CyberArts Licensing LLC.

“We view it as a global opportunity,” Tom Breitling, chairman of Fertitta Interactive, said during an hour-long presentation . “We believe the timing is right to enter the world of online gaming, so we are doing so with Ultimate Gaming.”

Breitling said its free-play poker game, Ultimate Poker, will be released Friday on Facebook, with a promotional campaign to begin July 7 during Ultimate Fighting Championship 148, a pay-per-view event.

The Las Vegas-based company will launch real money poker in Nevada as soon state gaming regulators approve pending manufacturer, service provider and operator licenses, Breitling said. That should be by the end of the year, he said.

Breitling said the company will “be ready to go from Day 1,” and noted that UFC’s predominantly male demographic is almost the same as that of online poker. The fights have a potential audience of 1 billion homes in 148 countries.

Fertitta Interactive is a division of Fertitta Entertainment LLC, which is also the parent company of Station Casinos LLC and the UFC. The company will control all of the content of its products, with games developed by CyberArts.

Tobin Prior, CEO of Fertitta Interactive, said Ultimate Gaming would use UFC’s successful record of building social networks to develop games that reach across multiple platforms. The UFC has more than 8 million Facebook likes, 2.4 million Twitter followers and more than 311 YouTube views.

Prior said it was about creating a marketing synergy with the UFC, whose audience he described as “the next generation of gamers.”

Chris Derossi, chief technology officer with Fertitta Interactive and founder of CyberArts, said Ultimate Poker will be more familiar to players than are other online games.

“We are trying to make this a more realistic experience for poker players who take the game seriously,” Derossi said.

Fertitta Interactive hopes to capture a share of a multibillion dollar market. According to H2 Gaming, a London-based research firm, the U.S. online poker market will exceed $4.3 billion, assuming federal legislation is passed and every relevant state opts in.

“We would prefer an online poker-only bill, which would make all other games illegal,” Breitling said. “We think that’s the right way for this to play out. But it’s moving very quickly on a state-by-state approach.”

Before April 15, 2011 – also known as Black Friday when the U.S. Department of Justice unsealed an indictment against PokerStars, Full Tilt Poker and Absolute Poker – the online poker market in the U.S was more than $3.5 billion, claiming more than 6 million individual accounts.