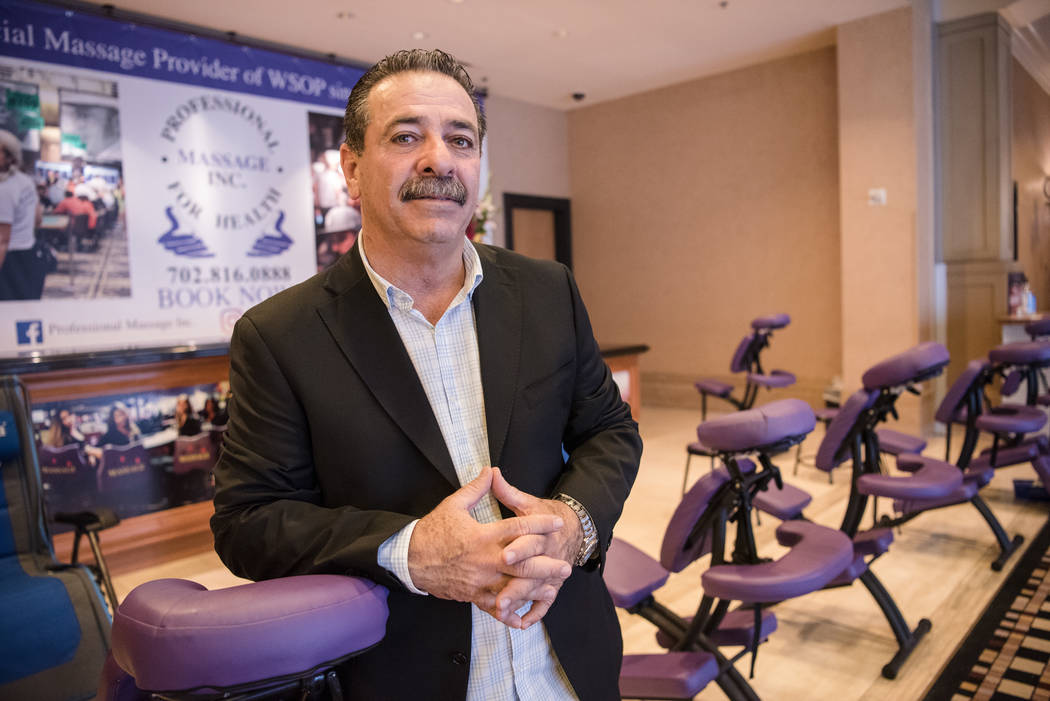 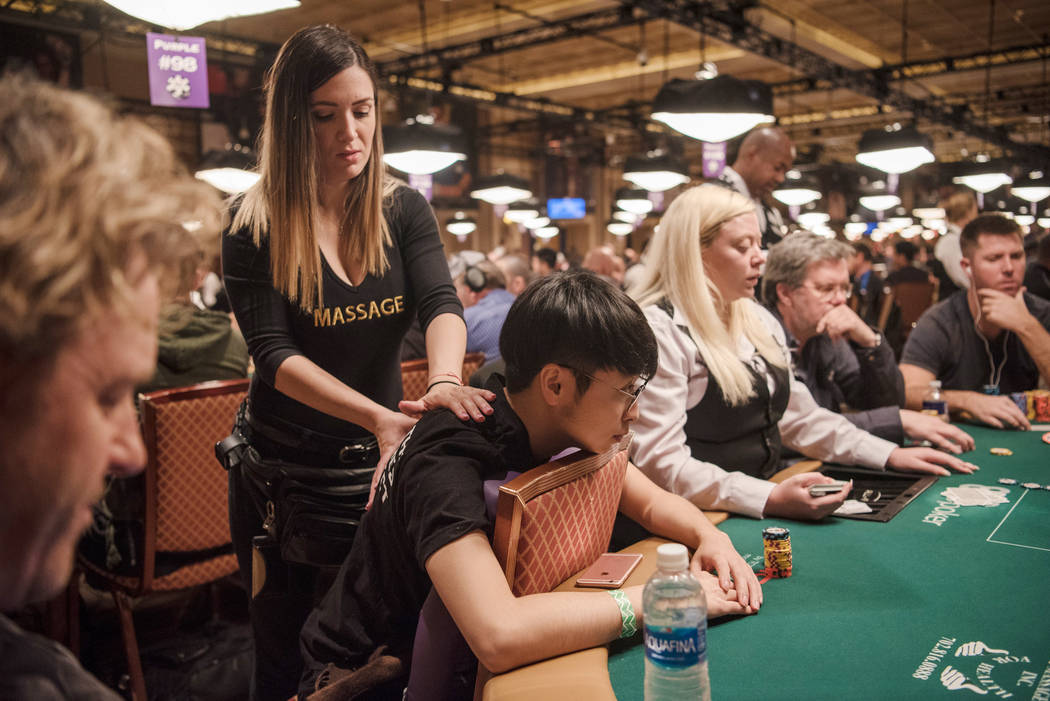 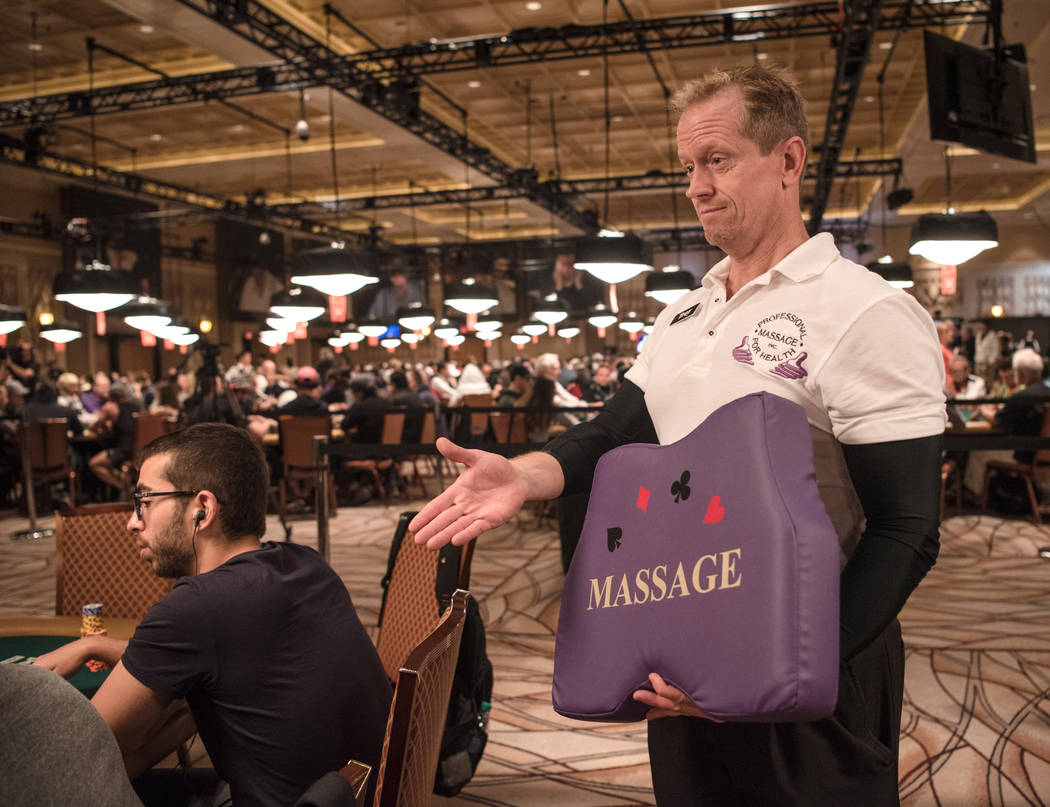 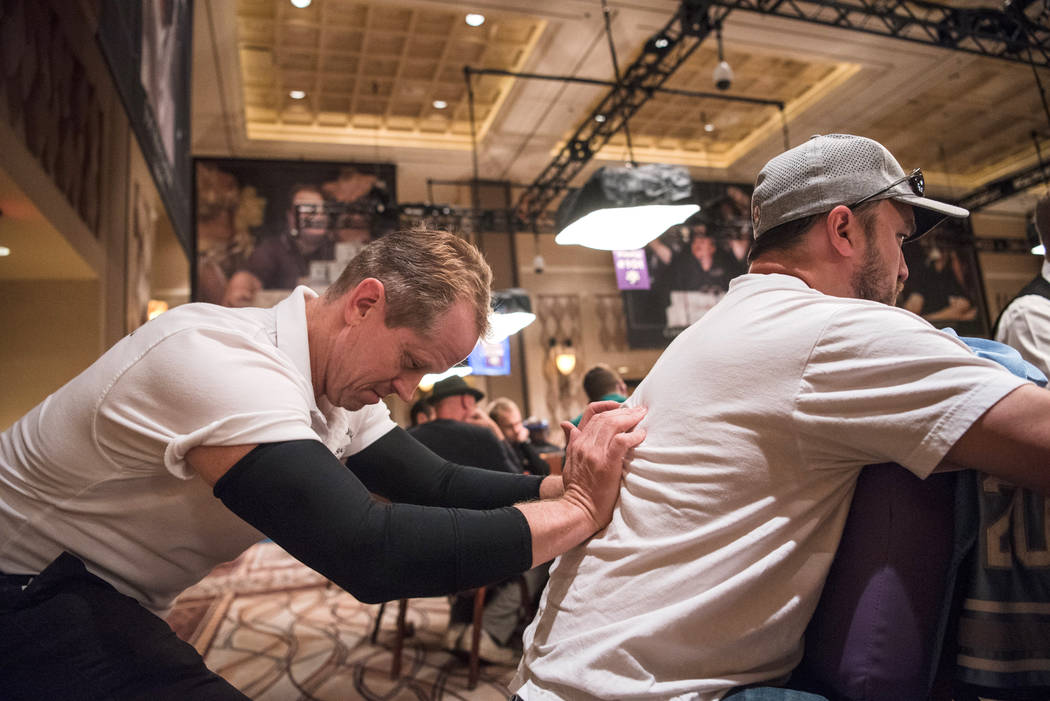 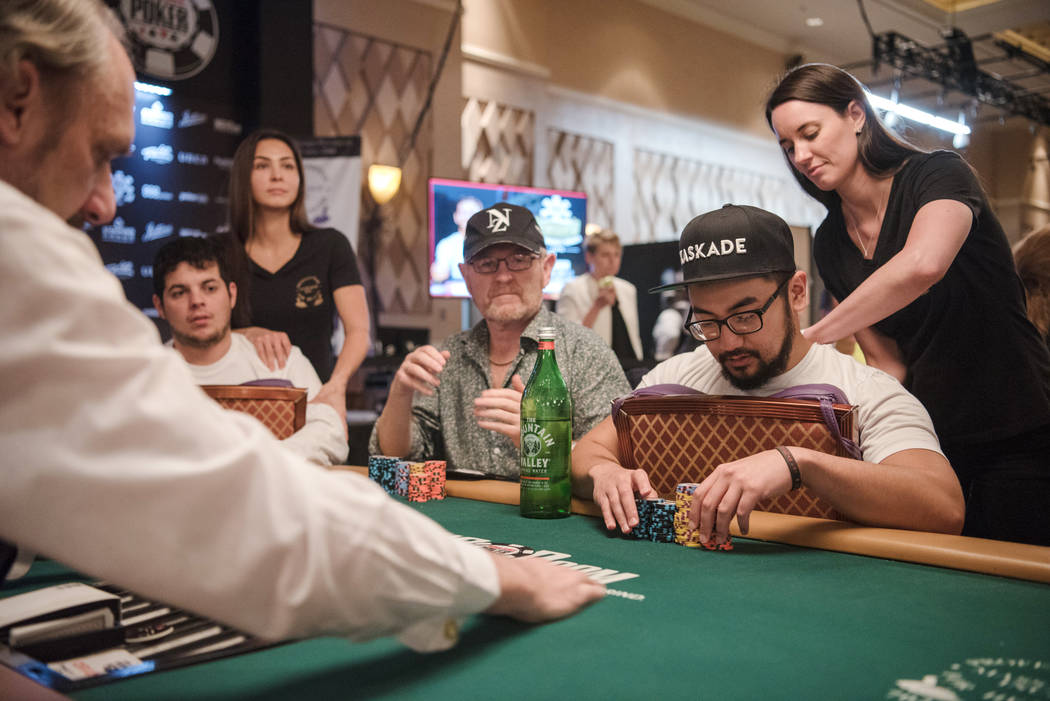 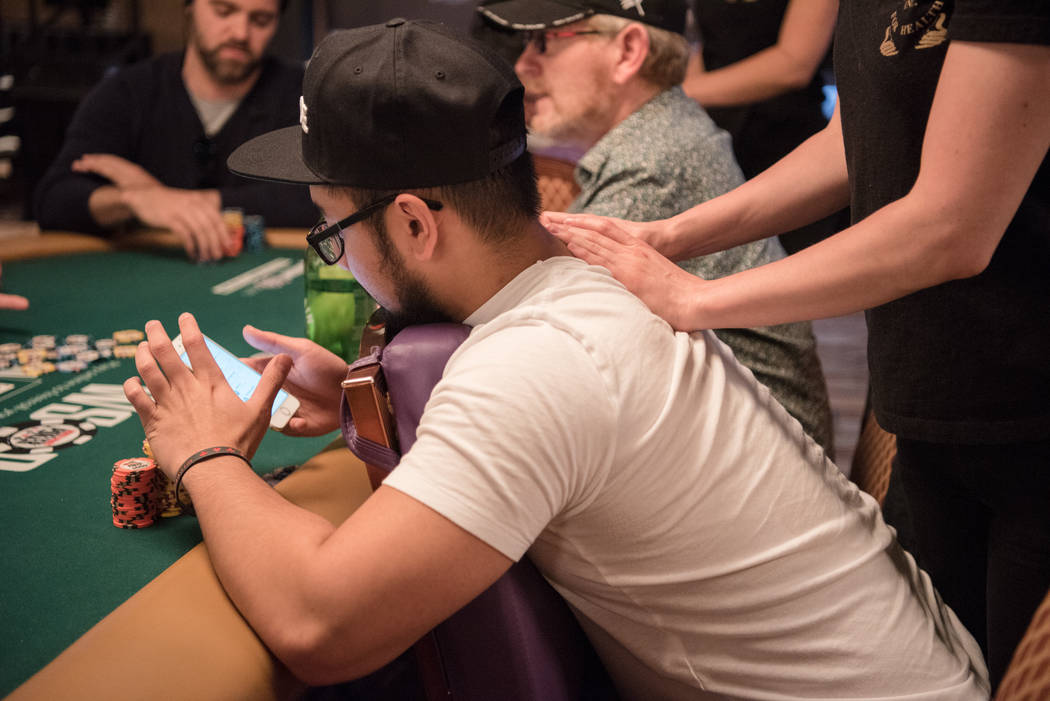 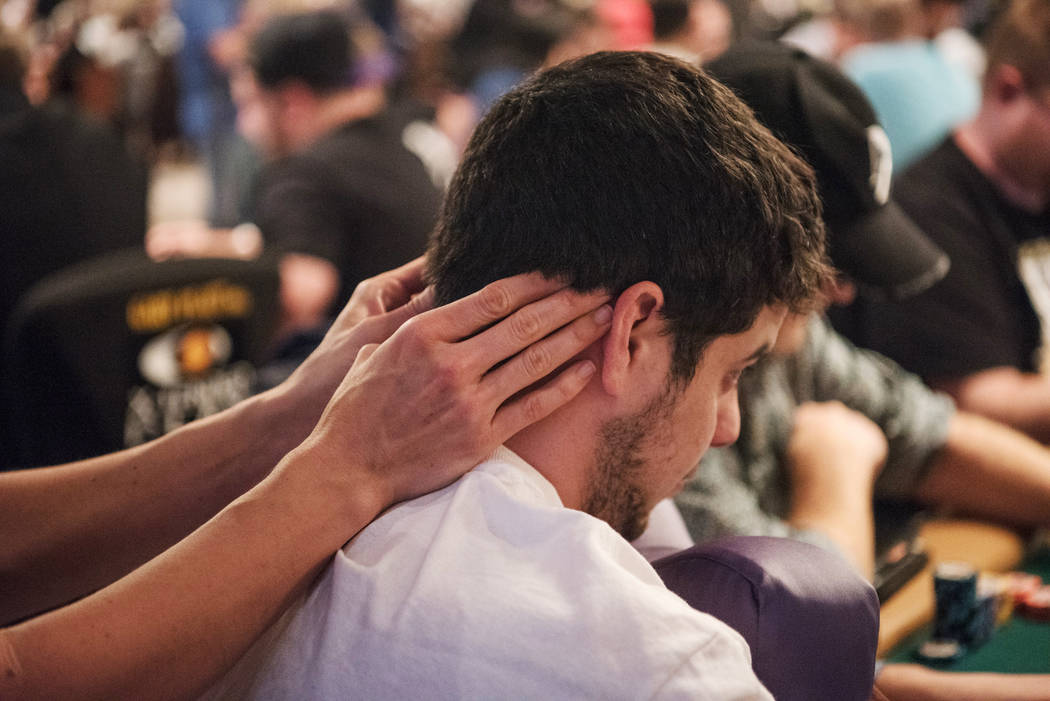 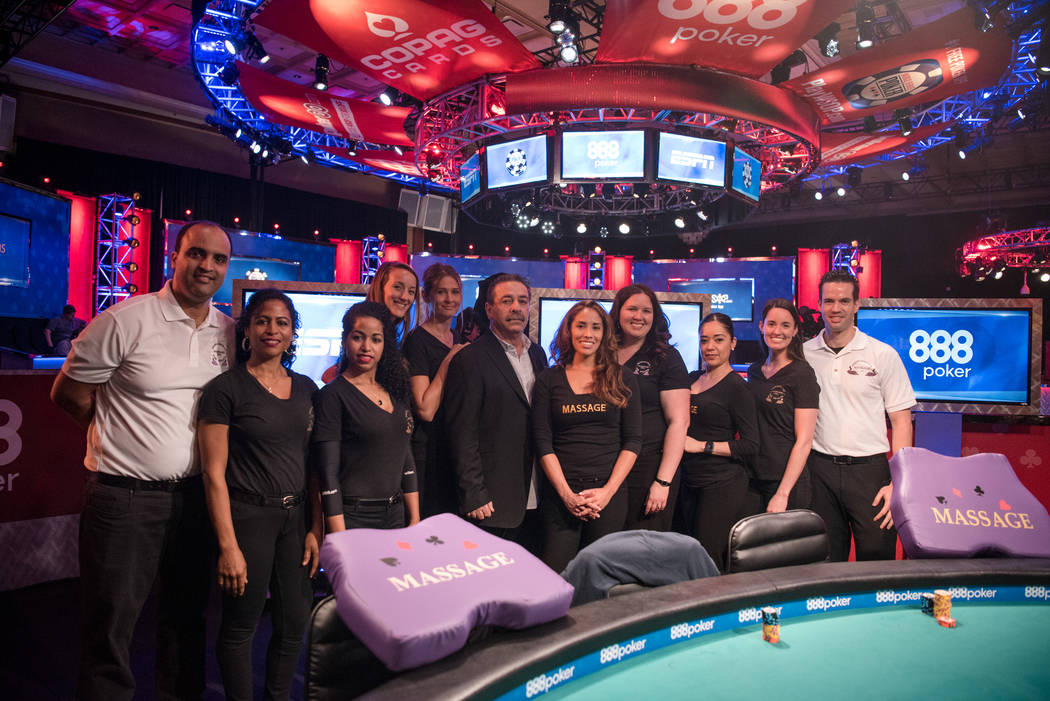 For years Cuban immigrant Rolando Coro has been winning big at the World Series of Poker.

But he doesn’t play cards.

The 59-year-old runs the army of massage therapists that keep thousands of poker players each year at ease during the intense, eight-week tournament.

Professional Massage Inc. has 407 therapists, including many part-time specialists from out of state, at this year’s WSOP. They are racking up thousands of massage hours around the clock at $2 a minute.

“This is the Super Bowl of massage,” said Coro in the Pavillion Room at the Rio, as dozens of therapists — dressed in black sneakers, pants and short-sleeved, V-neck shirts with poker prints on the back — work player’s shoulders at game tables. More work the hallways outside.

The father of three has come very far — both literally and financially — over the past 20 years. His story comes with all the bells and whistles of the classical American rags-to-riches immigrant story.

Born and raised in Cuba, Coro worked as a massage therapist for the Caribbean nation’s volleyball team for nearly 10 years. When his wife became pregnant in 1998, he boarded a flight to Colombia with the hope of escaping. After staying in the South American nation for a month, he flew to Miami, the capital of Cuba’s U.S. diaspora.

“I didn’t want to raise my son in Cuba. I didn’t see a future for him,” he said.

Coro couldn’t pursue his profession upon arrival in Miami until he got a license. That required taking a nine-month course. He also had to learn some English.

Like many other immigrants, he took work that didn’t require much language skills — selling water on the street, delivering pizza for $7 an hour and building homes.

By 2000, he found work at the Eden Roc spa in Miami, where he rubbed down professional basketball players. It was there that he would discover something that would alter his life and fortunes forever.

The massage chair. The kind you see at the airport and malls these days.

They were rare in 2000, but Coro said he saw their potential.

“Massage was limited to people that could afford spas. The chair opened it to everyone. It created more demand,” he said.

He was so excited about the idea, he put on a white lab coat and tried to offer his massage services to pedestrians in Miami on his days off. The pursuit was cut short when the police told him he couldn’t do that.

Coro said work dried up in Miami soon after 9/11. He looked for new opportunities and saw gold in the desert.

He packed his bags and flew to Las Vegas in 2002 with his family.

“If you want fish, you go to the ocean. If you want money, you go to Vegas,” Coro said. “I knew the money was there. I just needed to find it.”

Like a fisherman with a ripped net, it wasn’t easy going.

Coro worked as a massage therapist at a few events at the Las Vegas Convention Center, but didn’t find it very profitable.

He pitched his services to several malls and was accepted in Primm. For nine months, his wife would drop him off at the bus stop so he could make the 45-mile trip by public transport to the gaming town on the California border.

“I told the manager, either I lose my apartment or my business.”

The Primm manager told Coro to try different spots in the mall. One day, after moving 15 feet, he made $400.

“From that day, everything changed.”

Coro got his first big break in 2004 when Gary Selesner, then the GM at Rio, helped Coro get work at Caesars Palace. Caesars and Rio are owned by the same parent company. Selesner said he knew offering massage in the poker rooms would work.

“Players tend to sit for very long hours and a massage is the perfect way to keep them feeling comfortable and relaxed,’’ he said.

Then came Coro’s next big break.

In 2005, Caesars bought the rights to WSOP. Coro was allowed to work the 2006 event for the first time with 40 therapists.

As WSOP grew in size and took over more convention space at the Rio, so too did Coro’s business. Next he had 60, then 100 and now 400.

He even designed a chair and a massage cushion especially for poker players at the table. The cushion has pockets for hand sanitizers and flyers.

“We pushed all the profit back into the business,’’ said Coro, a millionaire who drives a 9-year old Toyota Sequoia.

Professional Massage has 200 full-time employees and thus needs to hire temporary workers for WSOP. This year Coro hired about 80 therapists from 28 states, including as far away as Alaska and Florida. All have to obtain a Nevada massage license to work.

“It is a good opportunity for me as it is slow in the summer in Florida,” said therapist Casey Hulburt, who has been traveling to WSOP for several years. She and a colleague found housing through AirBnB and use Lyft to get around.

Hulbert and several other therapists said they try to work as much as possible, taking just a few days off over the two-month tournament. They earn $1 per massage minute. While demand fluctuates depending on the time of day and day of week, the therapists can earn on average $200 to $250, excluding tips. Tips can range from 10 percent to 15 percent. Players sometimes pay in chips.

Coro said there are strategies to working the poker tables. Therapists should approach players either when the dealer is handing out cards or collecting them back.

They should try to avoid looking at the cards, not push too hard to avoid shaking the table and not show any preference for a player. They also need to know how to deal with players that lose a lot of money.

“Sometimes we are like a psychological therapist,” said Troy Miller, one of about only 10 male therapists working at WSOP. The more than 90 percent female ratio inversely mirrors the 90 percent male dominance at the poker tables.

Some players will have a masseuse work several hours.

Verbeck takes powdered greens and keeps some nuts in her bag to get through those long requests.

“We take good care of ourselves,” she said.