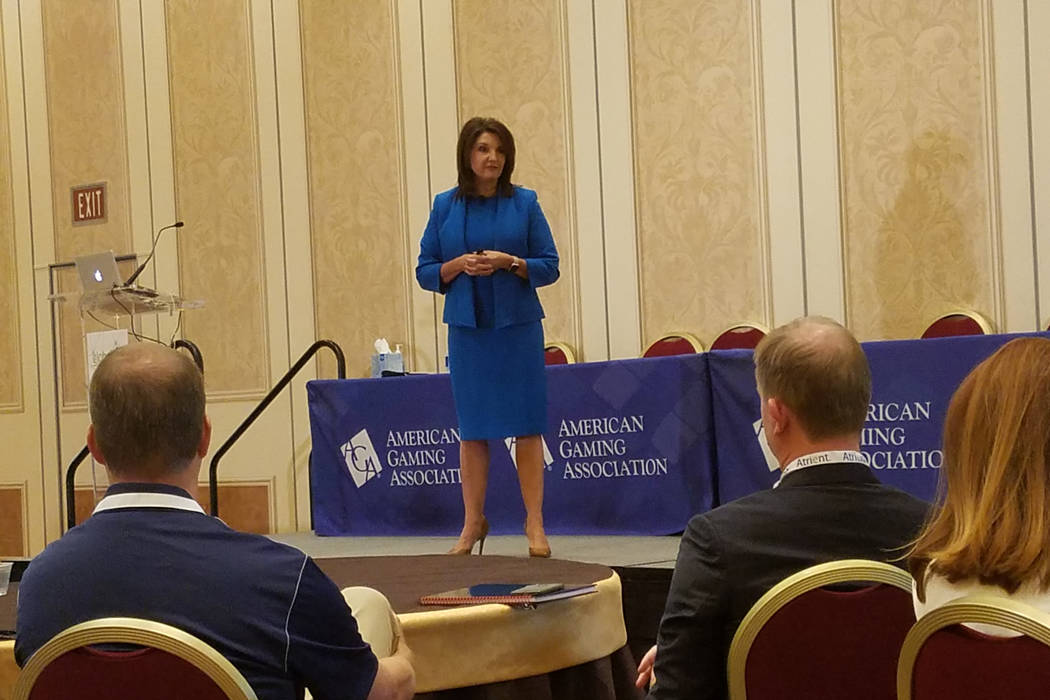 Journalist Sharon Delaney McCloud kicked off the Global Gaming Women keynote address at the 2018 Global Gaming Expo with a discussion on the lack of women in industry C-suites on Monday, Oct. 8, 2018, at The Venetian. (Richard N. Velotta/Las Vegas Review-Journal @RickVelotta

The gaming industry has taken note of an issue in the boardroom: a lack of women.

Sharon Delaney McCloud, an Emmy Award-winning broadcaster, delivered the first keynote address at this week’s Global Gaming Expo at the Sands Expo and Convention Center and The Venetian. The focus was female representation on corporate boards.

The Global Gaming Expo is the largest gathering of gaming industry executives in the world.

Boardroom diversification has become a key issue in the gaming industry and was brought to the forefront earlier this year when Steve Wynn stepped down as chairman and CEO of Wynn Resorts Ltd. in the wake of accusations of sexual harassment. He has denied all allegations made against him.

The company’s critics said having more women on corporate boards would reduce the likelihood of allegations of broad sexual misconduct by employees.

When Wynn stepped down, Wynn had nine board members, only one of which was a woman. At that time, Las Vegas’ six largest gaming employers had just eight women among their 57 directors, and only two of the boards had female representation higher than the 21.2 percent average for S&P 500 companies, according to Catalyst, a nonprofit advocate for women in business.

The Wynn board now has four women out of 11 total board members.

McCloud said promotion to leadership positions is the biggest challenge facing women in the workplace and establishing executive presence is key to women’s advancement up the corporate ladder, and they can get there through gravitas, communication and appearance.

McCloud said in addition to women holding 21 percent of corporate board seats on Fortune 500 companies, they hold 21 percent of the executive officer positions.

She said women are constantly walking a tightrope in their bid to show executive presence.

“For women, we have to be well-tailored and nonthreatening. We also have to be attractive, but not sexy, intelligent, calm, direct, but not forceful, because we don’t want to appear abrasive,” McCloud said. “There are unfair biases that men who are extremely confident are confident, but women who are extremely confident are not necessarily described that way.”

Executive presence is important, she said, because leadership roles are given to those who look and act the part.

“Presence alone won’t get you promoted,” McCloud said, “but absence will impede your progress.”

She said studies have shown that people base their perceptions 55 percent by body language, 38 percent by vocal delivery and 7 percent by the content delivered. She recommended sitting and standing tall, moving with purpose, never retreating and smiling when appropriate.

She also suggested speaking up without being shrill, staying on point and amplifying other women’s ideas.

An employee at a tribal casino in Arlington, Washington, said she was happy to see the issue raised within the association.

Shauna Williams, a guest services director at Angel of the Winds Casino, said it was a positive for McCloud to raise concerns about the struggles that women face in a male-dominated industry.

“There’s a different perception in the approach for different genders, even if it’s unconscious, even if it’s not a deliberate attempt and bias,” said Williams, who said she has struggled with advancement in her 15 years in the industry.

The Review-Journal is owned by the family of Las Vegas Sands Corp. Chairman and CEO Sheldon Adelson. Las Vegas Sands operates the Sands Expo and Convention Center and The Venetian.