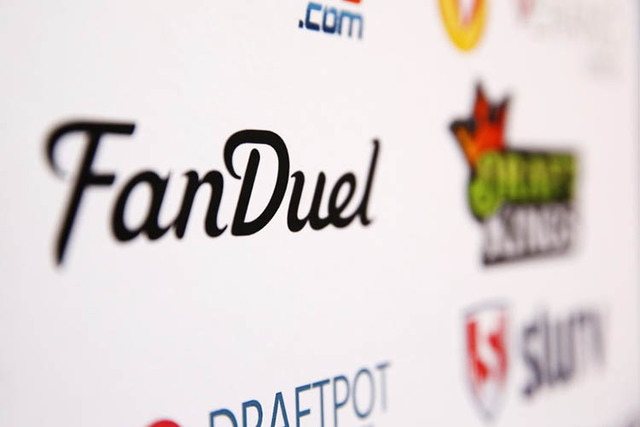 A FanDuel logo is displayed on a board inside of the DFS Players Conference in New York November 13, 2015. (Lucas Jackson/Reuters)

CARSON CITY — Daily fantasy sports betting could soon come to a Nevada casino near you.

The Gaming Control Board voted unanimously to recommend to the Gaming Commission the licensing of Salerno and his company, US Fantasy, for an off-track, pari-mutuel sports system operator’s license.

If Salerno wins final approval from the Gaming Commission, he would be the first to offer betting on fantasy sports contests through Nevada casinos.

Salerno said that if everything goes according to plan, players could by August begin betting on fantasy sports, from football to baseball, by placing bets just like gamblers do now on horse races.

Sports betting has been a steadily growing segment of Nevada’s gaming industry. The sports betting handle in Nevada was $2.4 billion in 2006. It topped $3 billion for the first time in 2012, escalated to $4.2 billion last year and is projected to approach $5 billion in 2016.

Salerno said he believes that at least 50 percent of the fantasy betting would come from new players. Some sports book operators have suggested it could be as high as 80 percent, he told the Gaming Control Board at the licensing hearing in the capital.

Daily fantasy sports was a booming, yet controversial, enterprise until October, when Nevada gaming regulators said the activity constituted sports wagering under Nevada law, and companies offering it thus had to be licensed by the state. Daily fantasy websites quickly stopped accepting wagers from Nevada customers after the ruling.

The committee, comprised of gaming industry leaders, state legislators and former and present industry regulators, made it clear that the state wants fantasy sports to be a part of Nevada’s wagering offerings, but members also said they view it as gambling that must be regulated to protect consumers.