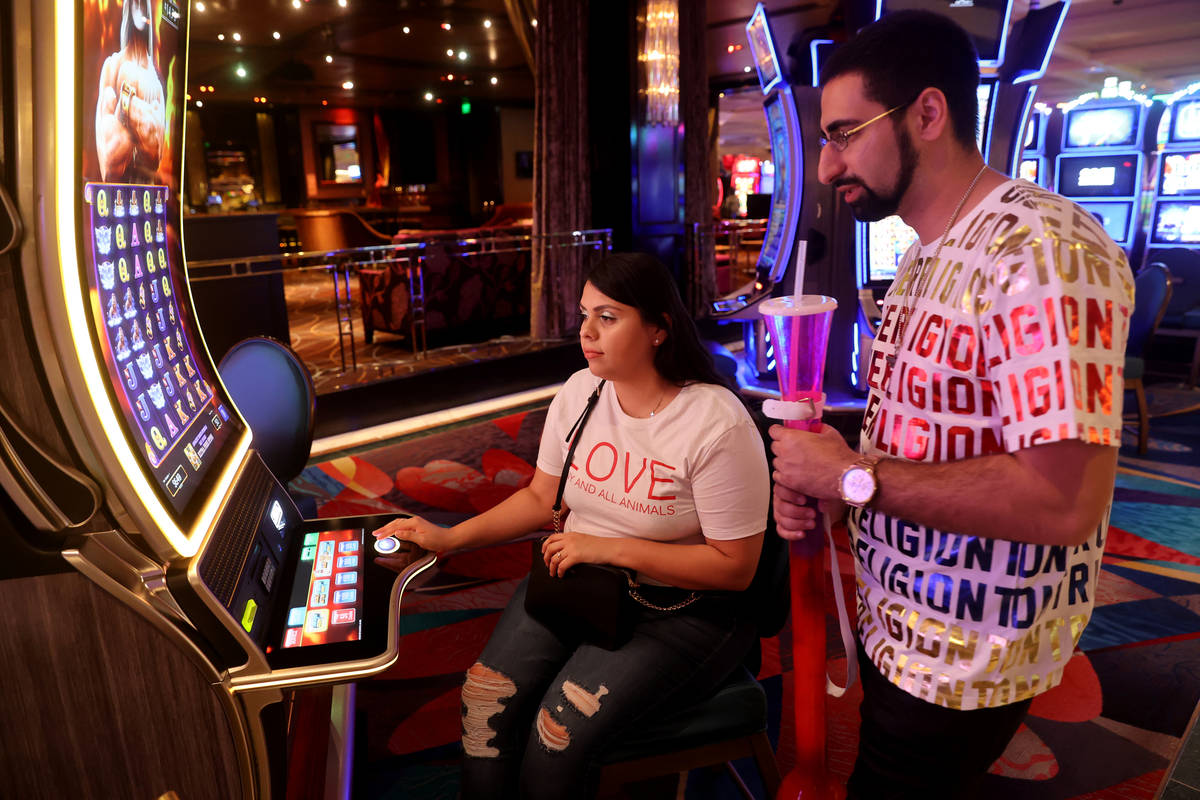 Arash Shahbazian and Michelle Muniz of Los Angeles play a slot machine at the Bellagio on the Las Vegas Strip on the first day the resort reopened after a 78-day shutdown due to the coronavirus, Thursday, June 4, 2020. (K.M. Cannon/Las Vegas Review-Journal) @KMCannonPhoto

Gaming win picked up for the state in June, the month when casinos were allowed to reopen, but totals still fell well short of normal levels, the state Gaming Control Board said Wednesday.

By percentage, the Strip and downtown Las Vegas had the worst June declines in the state.

June was the first month of meaningful revenue for the state’s more than 400 licensed casinos after they were ordered closed by Gov. Steve Sisolak in mid-March in a bid to slow the spread of the coronavirus pandemic.

Gaming win is important because it’s the taxable amount the state can collect for its general fund. Through Tuesday, the state had collected $344,027 in gaming taxes for the new fiscal year, a 99.4 percent decline from the previous year.

State leaders determined Nevada faced a $1.2 billion budget deficit as a result of the pandemic, and the Nevada Legislature met in a special session this month to determine how to plug the deficit hole. None of the solutions involved gaming taxes.

When casinos were allowed to reopen on June 4, they were at greatly reduced capacities with half the normal occupancy allowed. Even without the occupancy restrictions, casino patrons showed a reluctance to return in large numbers, with most of the traffic coming from local residents or from drive-in markets.

Some markets most dependent on drive-in traffic produced a rarity in June — an improvement in win from 2019. One such market was Mesquite, which reported a win of $10.1 million, 3.2 percent more than in June 2019.

Lawton said Mesquite, which thrives as a drive-in market from Utah and a getaway destination for Las Vegans, had higher win in June, with Mesquite coming off a modest 2.9 percent increase from 2018 to 2019.

Lawton said much of the loss could be attributed to books paying off previous winning football tickets from January and February since June was the first time casino books were publicly open since March.

A gaming industry analyst said the June results showed the Las Vegas locals market is recovering faster than the Strip, and he told investors in a report that Boyd Gaming and Red Rock Resorts (Station Casinos) stock may be better investment choices.

“The locals market is recovering faster than the Strip gross gaming revenue, which makes sense given the general Clark County area population benefits from the Paycheck Protection Program and unemployment checks and a retiree base in the area,” said Joe Greff, an analyst with New York-based J.P. Morgan.

“Similarly, we believe these results reflect Strip traffic coming from mostly, if not all, drive-in visitors, operating with limited amenities (food and beverage, no shows, nightclubs, etc.), and the staggering of reopenings,” he said. “We continue to prefer locals-exposed operators Boyd and Red Rock Resorts over Strip operators.”

The Las Vegas Convention and Visitors Authority, which normally reports visitation results on the same day as gaming win, said Tuesday that its June report would be released next week.