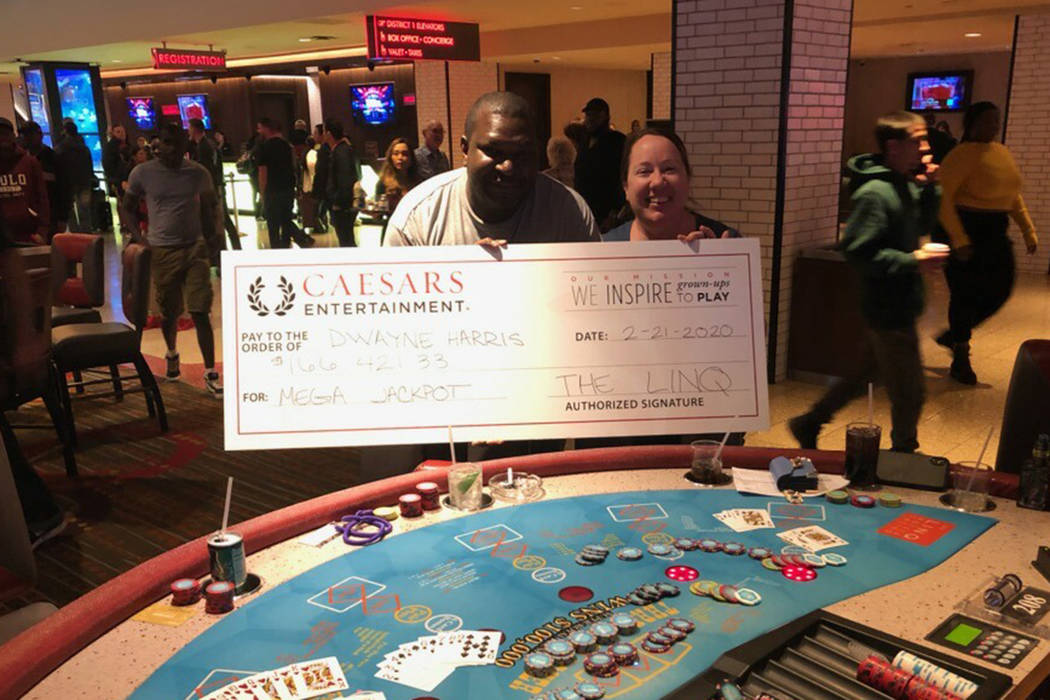 Caesars Entertainment properties on the Las Vegas Strip were the places to score jackpots this past weekend.

Dwayne Harris of Georgia landed the largest of the four scores on Friday night at The Linq Hotel, winning $166,421 on a Three Card Poker mega jackpot, according to Caesars spokesman Tanner Owens.

Harris said he will use a portion of the money to put toward a home, while his wife added that they will also get a new refrigerator.

On Sunday morning at Paris Las Vegas, Jerry DeSimone of Elmwood Park, Illinois, also succeeded on Three Card Poker, hitting a straight flush for $108,337.05. DeSimone said he is going to pay off a home improvement loan and invest the rest of his winnings.

On Saturday morning at Planet Hollywood Resort, a player who chose to remain anonymous won $93,824.53 with a royal flush jackpot on Ultimate Texas Hold ‘em.

Finally, on Friday at The Cromwell, visitor Donna Y. hit a progressive mega jackpot on Blazing 7’s for $43,167.

Our Casino Staff had a busy weekend giving out checks!!! We had 3 jackpots @TheLINQ, @ParisVegas, and @PHVegas totaling $368,582. If you are visiting this week, we hope that you can keep the winning momentum going! #Bigwins #MondayMotivation pic.twitter.com/p5HBezBV0P

The winning spin hit around 10 a.m. Wednesday, according to a Station Casinos spokeswoman.

At Aliante, one player is enjoying a $15,050 jackpot on Quick Hit Platinum.

$15,050 for our big winner on Quick Hit Platinum! pic.twitter.com/n7DMNDpF9Z

At Plaza, Cynthia from Texas earned an extra $12,358 from bingo Cashball Bonus.

A big round of applause to Cynthia from Texas for winning $12,358 from the cashball bonus!! 👏👏👏#PlazaLV #DTLV #OnlyVegas pic.twitter.com/e7TsINXuHC