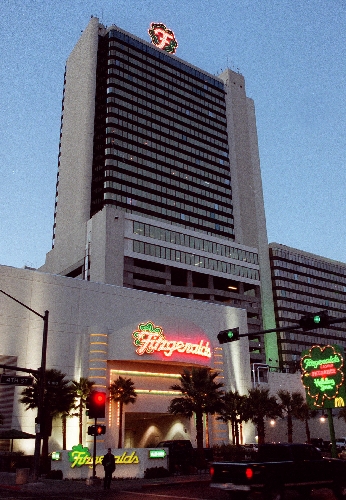 Owners of the Golden Gate are making another big bet in downtown Las Vegas with the purchase of the 640-room Fitzgeralds from the estate of former owner Don Barden, the first black man to own a Las Vegas casino.

The deal, disclosed to employees at both properties Thursday afternoon, puts Fitzgeralds in the hands of an operator who has been growing in downtown Las Vegas despite the tough economy.

"I’m putting my money where my mouth is on this one," Stevens said.

The emails disclosing the sale to employees stated that Stevens has no plans to lay off any of the approximately 600 people working at Fitzgeralds. To the contrary, Stevens hopes to increase the staff to more than 800 workers. There are also plans to renovate the casino’s second floor, upgrade the hotel rooms and eventually rename the property.

The new ownership will be divided between Derek Stevens and his brother Greg Stevens, with Derek Stevens holding the majority interest.

Stevens said the deal was a stock purchase and that the property will be debt-free for the new owners, who hope to take over by the end of October.

Stevens was pursuing a purchase of Fitzgeralds for months. But the effort came to a halt in May when Barden, who had been ill, died.

Fitzgeralds’ two-level casino attracted Stevens to the property. He hopes to remodel the second-floor portion to reflect a "vintage Vegas" theme.

The casino property also has an 11-story parking garage that can accommodate more than 600 vehicles and hotel rooms that are large enough to be remodeled to a level that reflects the taste of modern visitors.

"We have a lot of work to do here," Stevens said.

The hotel was built in 1979 and formerly operated as the Sundance. It sits on several parcels of land, some of which were sold with the hotel and some of which are held by landowners who lease the ground to the casino operator.

The pending deal is the second big downtown move by Stevens in recent weeks. Earlier this month, he announced he would spend $12 million expanding and refurbishing the Golden Gate building, which was built in 1906 and is the oldest of the downtown gambling properties.

Independent downtown researcher Frank Martin said he thinks the Fitzgeralds purchase is a good deal for the market.

"In my opinion, the owners are making a good strategic move for the future," Martin said.

But he added that based on continuing stagnation in downtown gambling revenue, it’s not likely the casino floor will add new workers.