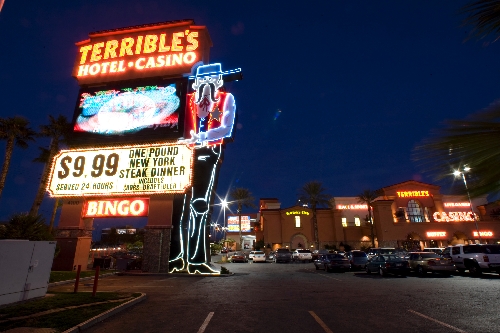 Herbst Gaming is expected to emerge from bankruptcy by the end of the year — without a Herbst at the helm.

The Nevada Gaming Commission on Thursday signed off on the court-approved reorganization plan for the casino company and slot machine route operator.

Regulators expressed optimism with the company’s new financial structure, which will reduce the business’s long-term debt from $1.2 billion down to $350 million.

The founding Herbst family will lose their ownership stake, with a consortium of some 140 lenders taking over, exchanging debt for equity in the company. Silver Point Capital, a Greenwich, Conn.-based hedge fund, controls the largest stake in Herbst Gaming, roughly 16 percent.

“We believe in the business,” Silver Point co-CEO Edward Mule told the gaming commission. The hedge fund will not have a representative on the Herbst five-person board of directors.

The day-to-day operation of the company, which has 15 casinos in Nevada, Iowa and Missouri, as well as a 6,000-machine Nevada slot route, will be handed two gaming veterans, President David Ross and Chief Operating Officer Ferenc Szony.

Ross is a former executive with Coast Casinos and Boyd Gaming Corp., while Szony joined Herbst when the company purchased five Northern Nevada casinos in 2007.

In an interview Wednesday before the commission hearing, Ross said leaving the constraints of bankruptcy will allow Herbst Gaming to “operate in the most efficient manner possible.” The company, which employs about 5,200 workers, eliminated roughly $40 million in operating costs in the past year.

“It was a very challenging process,” Ross said. “But we’re going to emerge as a much stronger operator.”

The company began as a slot machine route operator, owning games in bars, taverns and restaurants throughout Nevada and sharing the revenues with the establishments’ owners. The company grew substantially in 2007, spending $140 million to acquire the Northern Nevada casinos and spending $349 million to acquire Primm Valley, Buffalo Bill’s and Whiskey Pete’s from MGM Resorts International.

However, a voter-enacted smoking ban inside taverns and restaurants sent gamblers to casinos and damaged revenues from route operations. The troubled economy contributed to Herbst’s problems and the company couldn’t manage long-term debt obligations that came about because of the casino acquisitions.

The cost cuts enacted during the bankruptcy and a gradual recovery helped the company record a net income of almost $13.7 million in the first six months of 2010, after recording net losses each of the past three years.

Herbst’s Southern Nevada casinos include the off-Strip Terrible’s and the three Primm casinos. The company also has riverboat casinos in Iowa and Missouri. The slot machine route, which covers more than 300 locations around the state, is Nevada’s largest.

Ross said the company has no plans to sell any of existing properties and has embarked on capital improvement projects at the Primm casinos.

The company will continue to be known as Herbst Gaming and has a trademark agreement with the Terrible Herbst’s Oil Co. to use the Terrible’s logo on existing casinos.

Gaming Commission Chairman Pete Bernhard paid tribute to the Herbst family Thursday, saying they had contributed much to the gaming industry.

“This is a milestone day, but I’m sure this is not a happy for the Herbsts,” Bernhard said, adding the business was thrown “for a big loop” by all the combined factors.