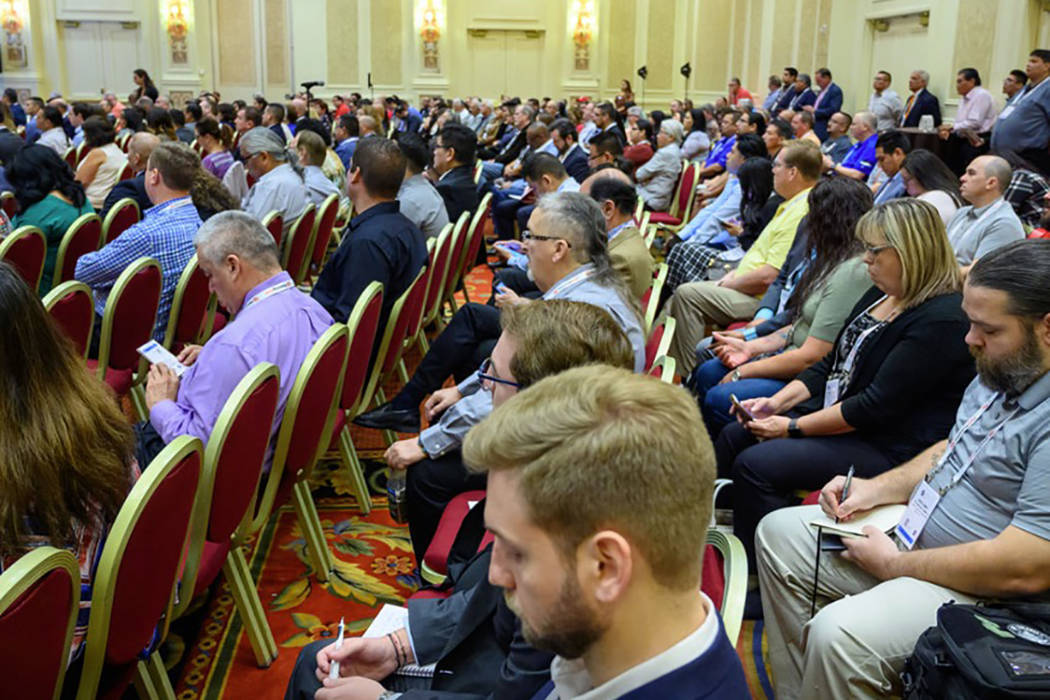 Attendees take in a session on Monday, Oct. 14, 2019, at the Global Gaming Expo at The Venetian Congress Center and the Sands Expo and Convention Center, (G2E Facebook)

Confusion will continue to swirl around a nearly year-old U.S. Department of Justice opinion on the federal Wire Act, panelists in a 2019 Global Gaming Expo opening-day session said Monday.

Differences over the new interpretation of the act have landed the matter in a federal Appeals Court, but it could ultimately could end reaching the U.S. Supreme Court, panelists said during the first day of the G2E conference at The Venetian Congress Center and the Sands Expo and Convention Center. About 27,000 people are expected to attend the world’s largest casino industry event, which includes a trade show that opens Tuesday morning.

Eight years ago, Department of Justice officials released an opinion that said the Wire Act — legislation originally approved during the Kennedy administration that prohibited wagering information from being conveyed by telephone across state lines — applied only to sports wagering.

The development of the internet further blurred definitions of what constitutes federal communications as defined within the Wire Act.

Last November, the Trump administration’s Justice Department issued a new opinion not publicized until January that says the Wire Act applies to other forms of wagering and not just sports bets.

Panelists acknowledged that packets of data related to wagering are routinely transmitted in online communications.

Panelist Dawn Himel, deputy director of the Gaming Division of the Louisiana Department of Justice, said it’s also possible that data packets transmitted through cellular telephone communications can bounce off out-of-state cell towers even if a communication occurs within a state’s borders.

In June, U.S. District Judge Paul Barbadoro dismissed the new interpretation of the Wire Act, setting the stage for an Appeals Court hearing brought by the New Hampshire Lottery Commission.

Lottery officials are concerned that requiring their games to comply with Wire Act statutes could cause multi-state lottery games such as Powerball and Mega Millions to be discontinued.

What could happen next was debated by panelists that included a Las Vegas gaming attorney and the CEO of a Reno company that has manufactured more than three dozen slot machine, keno and poker titles for land-based and interactive platforms.

Panelists agreed that whatever ruling comes from the Appeals Court is likely to be taken to the Supreme Court. But they also concurred that because of the length of time of the appeals process that it’s possible that a new administration could take over in January 2021 and have a different interpretation of the Wire Act.

Greg Brower, a shareholder with Las Vegas-based Brownstein Hyatt Farber Schreck, compared the treatment of the Wire Act to the Justice Department’s handling of federal marijuana laws in an era when several states have legalized medical and recreational use while federal statutes still consider it an illegal controlled substance.

Asked by panel moderator C.J. Fisher, a partner with Las Vegas-based Fox Rothschild LLP, what he’d do if the Justice Department decided to clamp down on social media games transmitted over the internet, Kent Young, CEO of Reno-based Spin Games, said he’d have no choice but to shut down his operation.

“We have to comply with the law of the land,” Young said. “If it comes down to if we can’t operate in North America, then we’ll obviously move out of North America.

“But,” he added, “there’s actually a great market just across the border in Canada.”