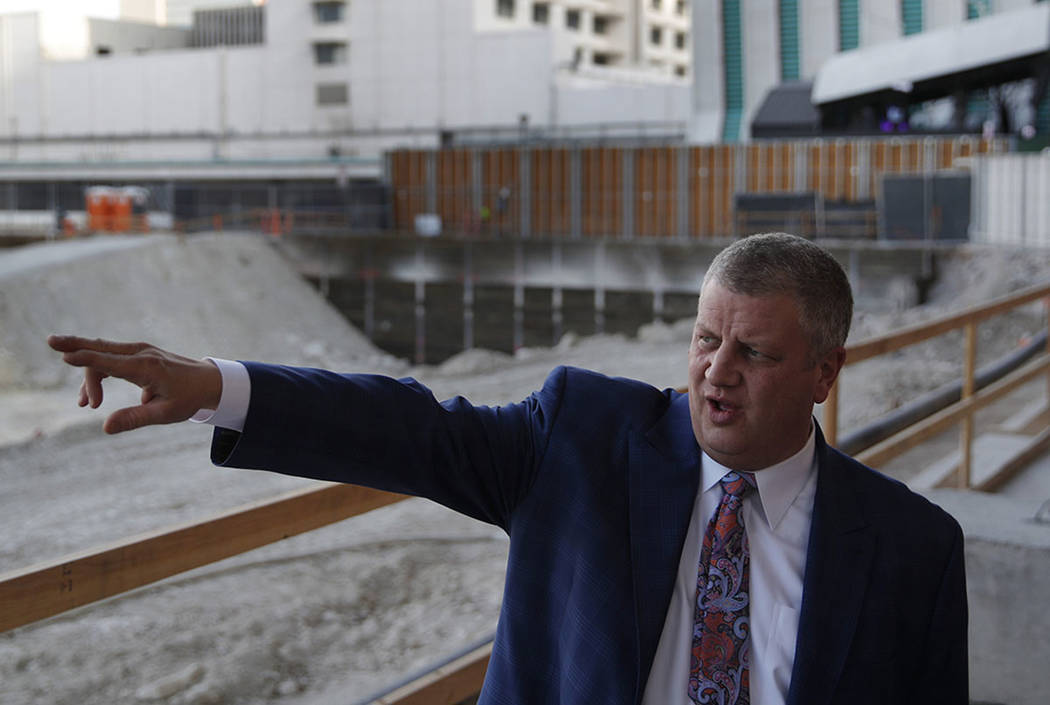 Casino magnate Derek Stevens conducts a tour where Circa is being built in downtown Las Vegas on Dec. 17, 2018. (AP Photo/John Locher)

Both over-the-top and willing to take a gamble, Project Neon and casino magnate Derek Stevens are helping transform the downtown Las Vegas landscape.

With officials slated to announce Monday the major completion of the largest public works project in Nevada history, Stevens is excited about what the increased mobility in and around the downtown area could mean for business, especially with a new resort coming on board next year.

The nearly $1 billion Project Neon will increase flow and access to downtown Las Vegas via a widened Interstate 15, as well as new and improved freeway exit ramps and access roads.

“With the design and what they’ve done, I think we really upgraded the transportation scenario in downtown Las Vegas,” Stevens said.

Project Neon is set to finish two months ahead of schedule, which is welcome news to Stevens, as completion comes just as an influx of visitors is slated to populate the area.

“It’s right in line for the start of the summer season,” he said. “Traffic and the flow and the ingress-egress is so critical to all the businesses here, and we’re very fired up about it. Everybody is just excited to reap the benefits.”

In addition to co-owning the D Las Vegas with his brother Greg, Stevens owns the Downtown Las Vegas Events Center, where attractions ranging from Golden Knights watch parties to concerts and sporting events draw thousands of people at a time.

One of those events, the annual three-day Punk Rock Bowling music festival, draws 15,000 attendees, according to the promoter. This year’s festival will take place May 24-27.

Stevens is eager to see how the traffic flow works during the first large event after Project Neon’s major completion.

He also owns the under-construction Circa hotel at the corner of Main Street and Ogden Avenue. It too is expected to benefit from Project Neon once it’s completed in late 2020.

“That was a significant element of our thought process,” he said.