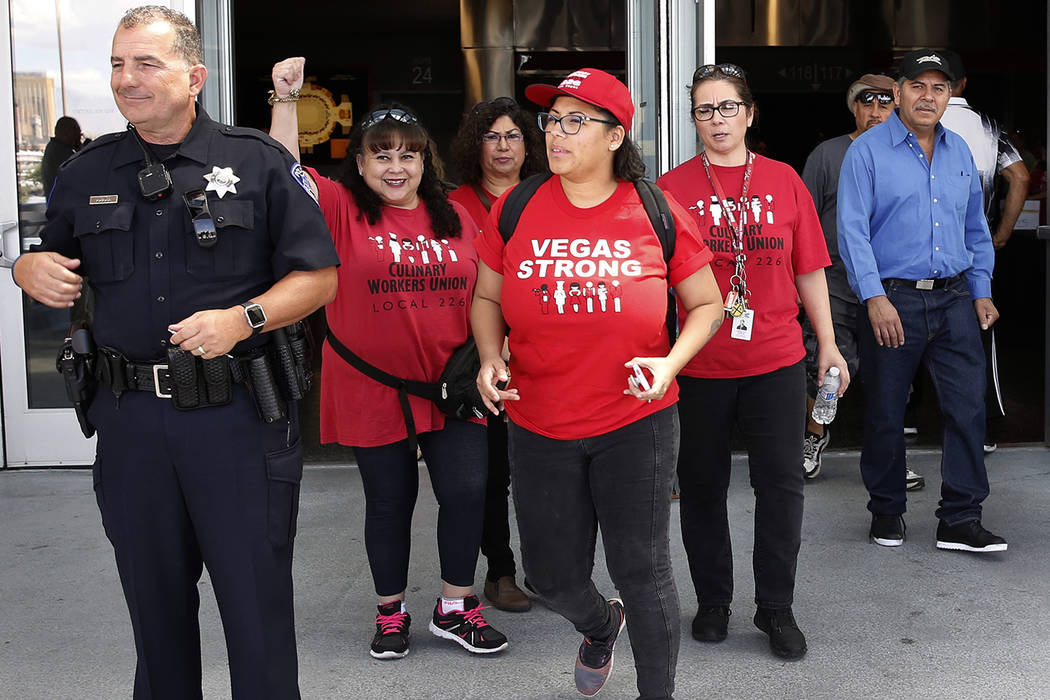 Culinary and bartender union workers, including, Mratha Rojas, second left, and Adela Montez, center, leave, Thomas and Mack Center in Las Vegas on Tuesday, May 22, 2018 after voting whether they want to go on strike. Bizuayehu Tesfaye/Las Vegas Review-Journal @bizutesfaye 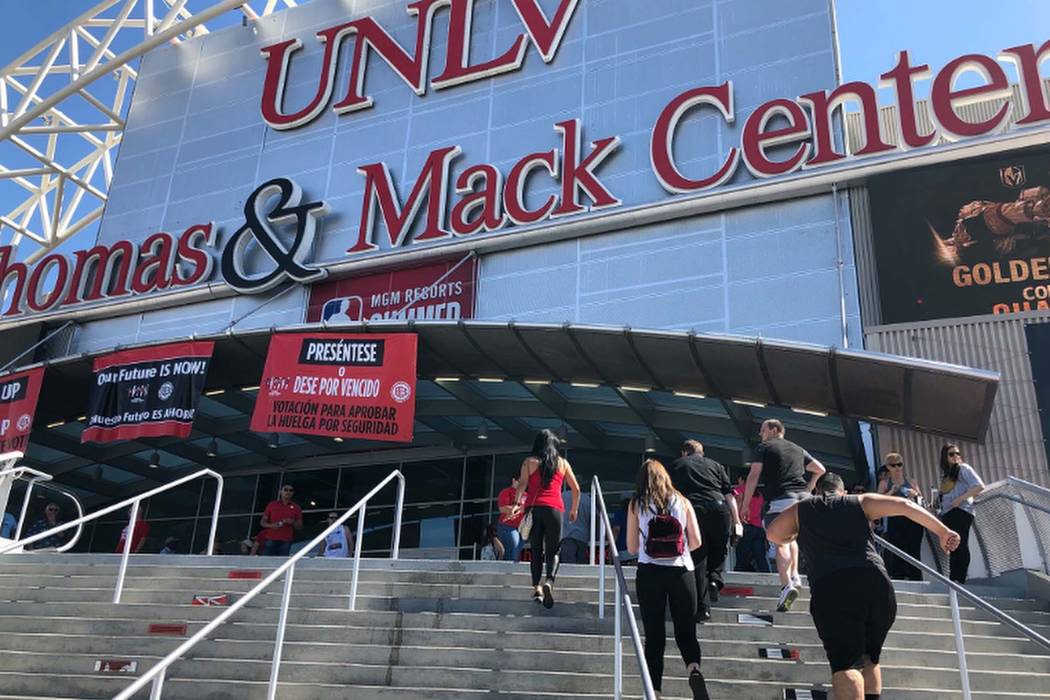 Culinary and bartenders union members arrive at the Thomas & Mack Center in Las Vegas on Tuesday, May 22, 2018, to vote on a citywide strike. (Todd Prince/Las Vegas Review-Journal) 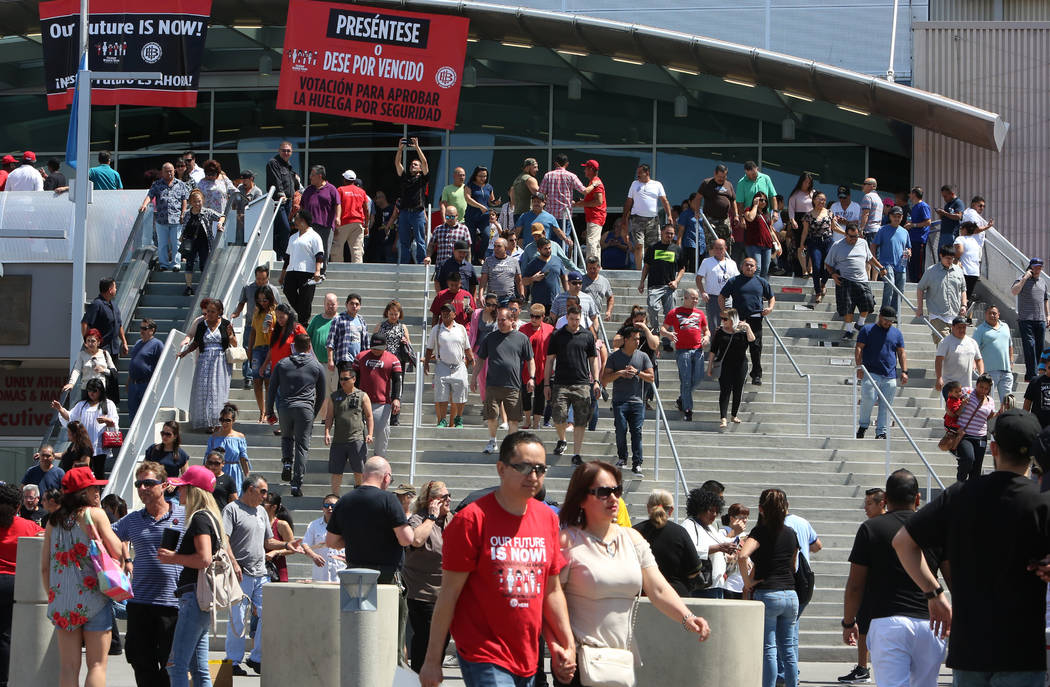 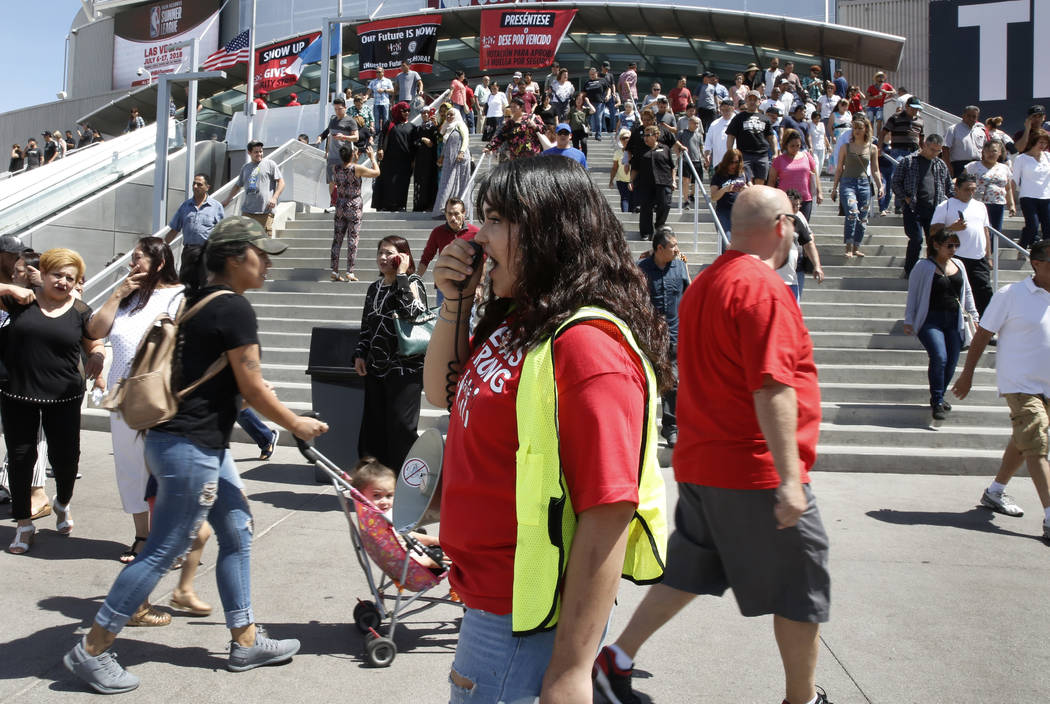 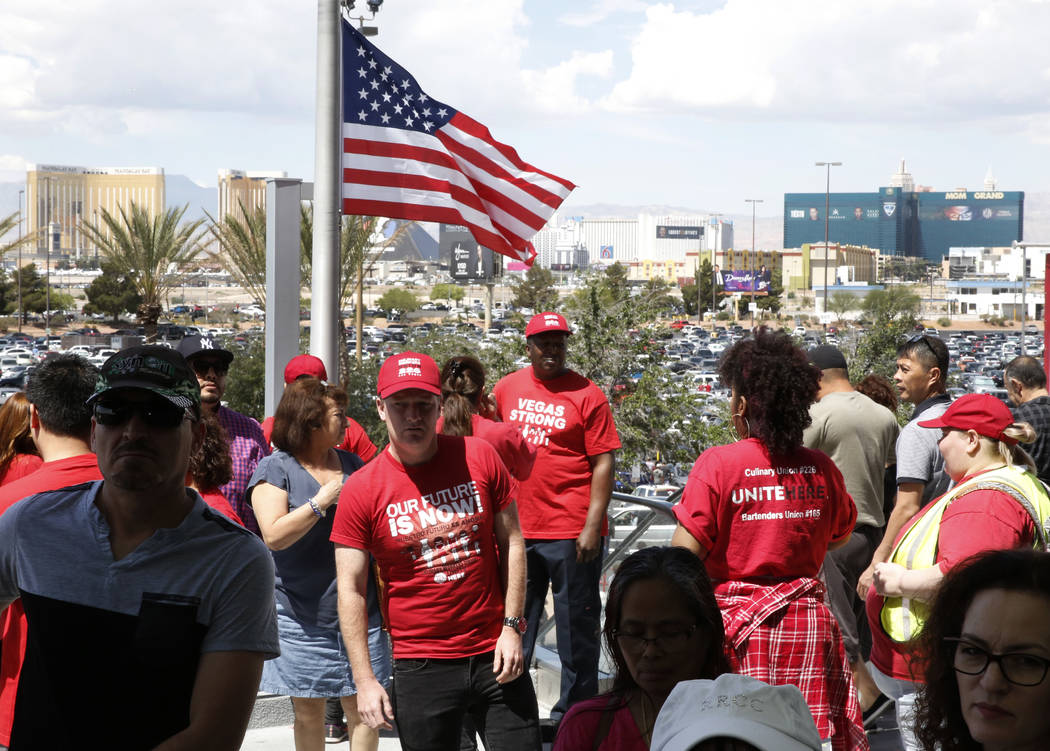 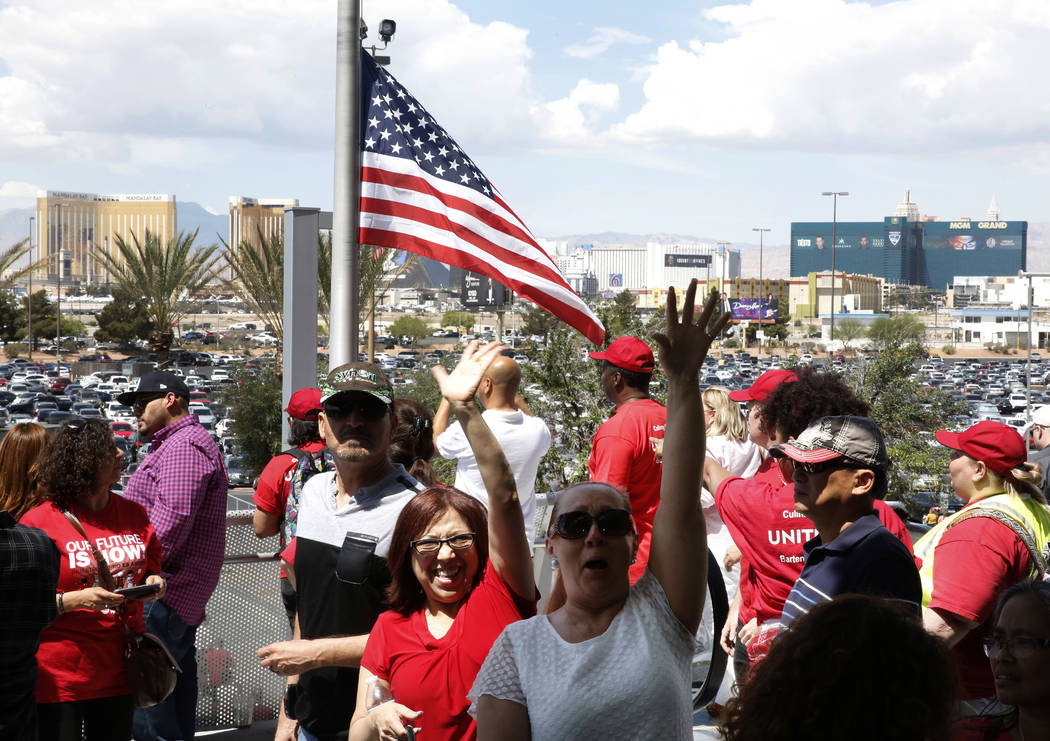 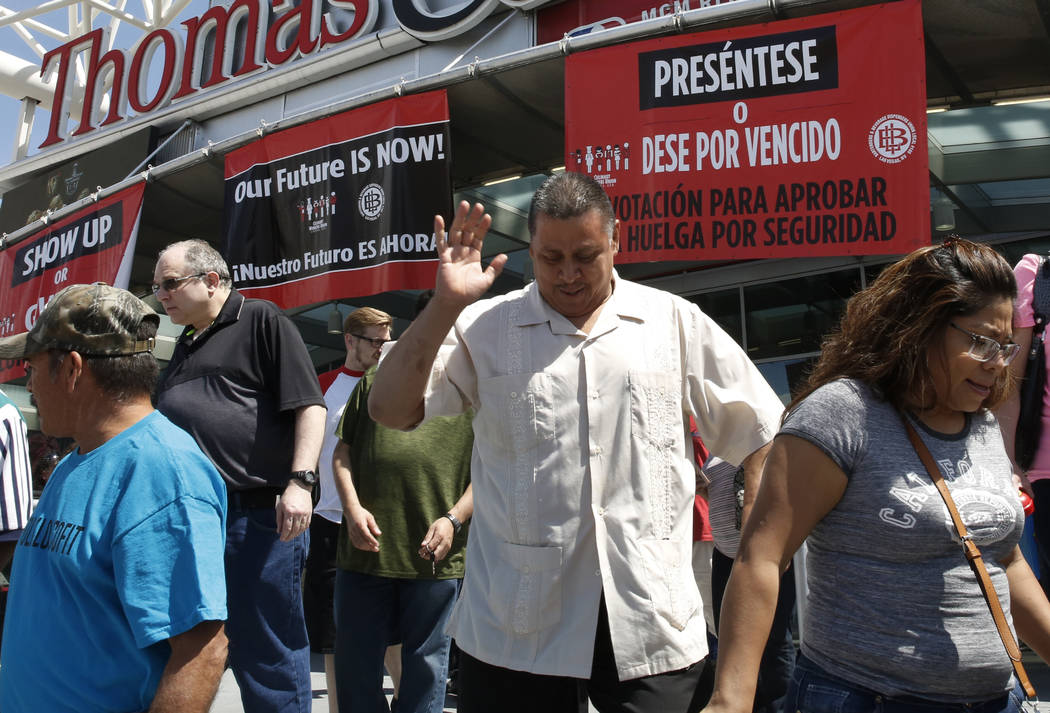 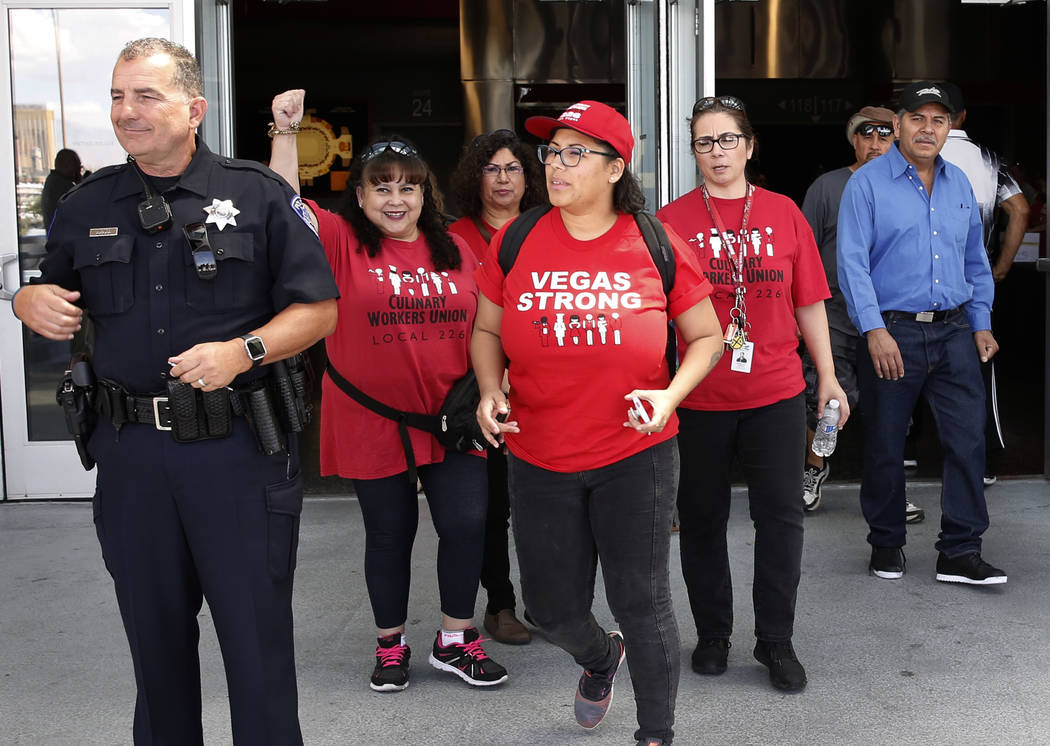 Culinary and bartender union workers, including, Martha Rojas, second left, and Adela Montez, center, leave the Thomas & Mack Center in Las Vegas on Tuesday, May 22, 2018, after voting whether they want to go on strike. (Bizuayehu Tesfaye/Las Vegas Review-Journal) @bizutesfaye 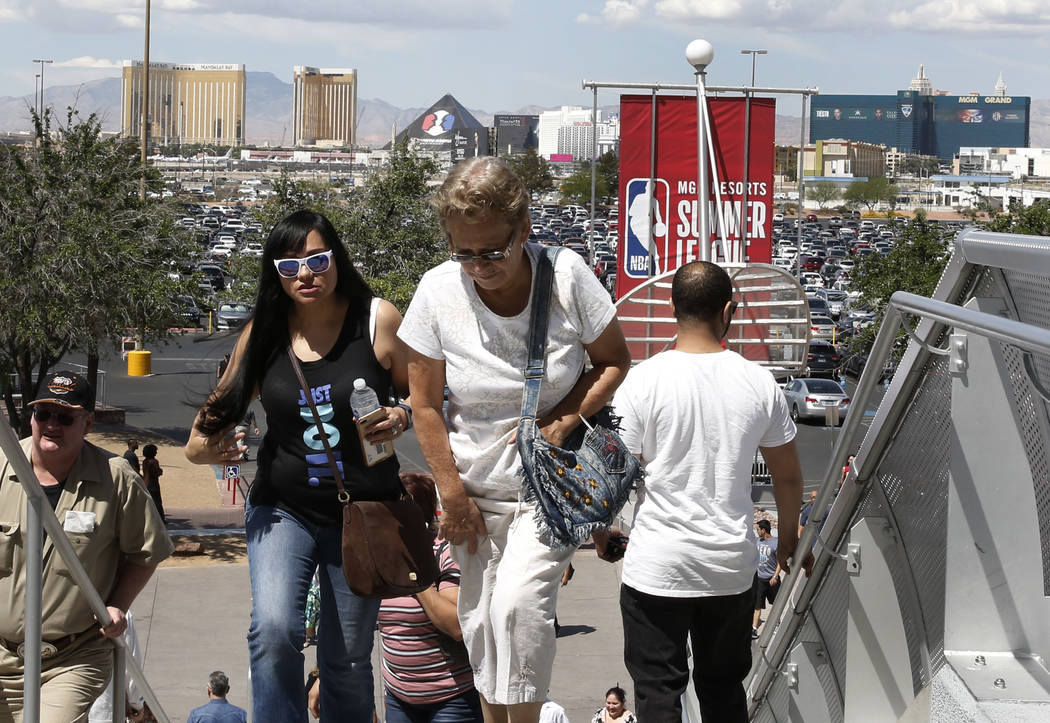 Culinary and bartender union workers arrive at the Thomas & Mack Center in Las Vegas on Tuesday, May 22, 2018, to vote whether they want to go on strike. (Bizuayehu Tesfaye/Las Vegas Review-Journal) @bizutesfaye 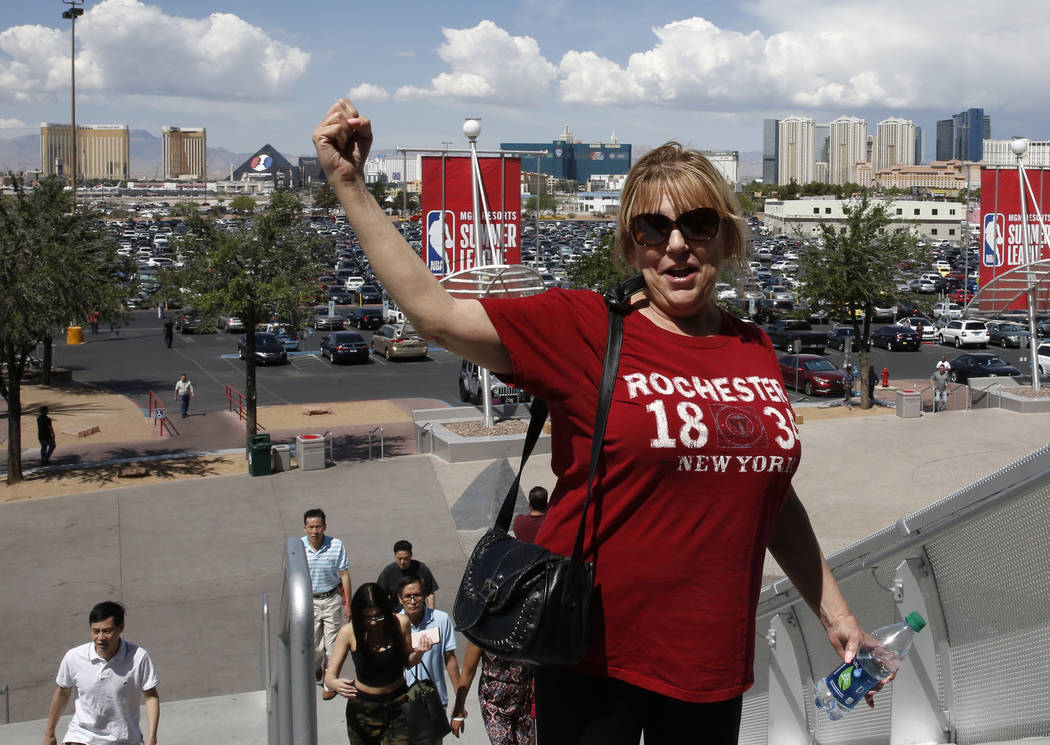 Deborah Lalli, a cocktail waitress at Bally's Las Vegas, arrives on Tuesday, May 22, 2018, at the Thomas & Mack Center to vote with culinary and bartender union workers whether they want to go on strike in Las Vegas. (Bizuayehu Tesfaye/Las Vegas Review-Journal) @bizutesfaye 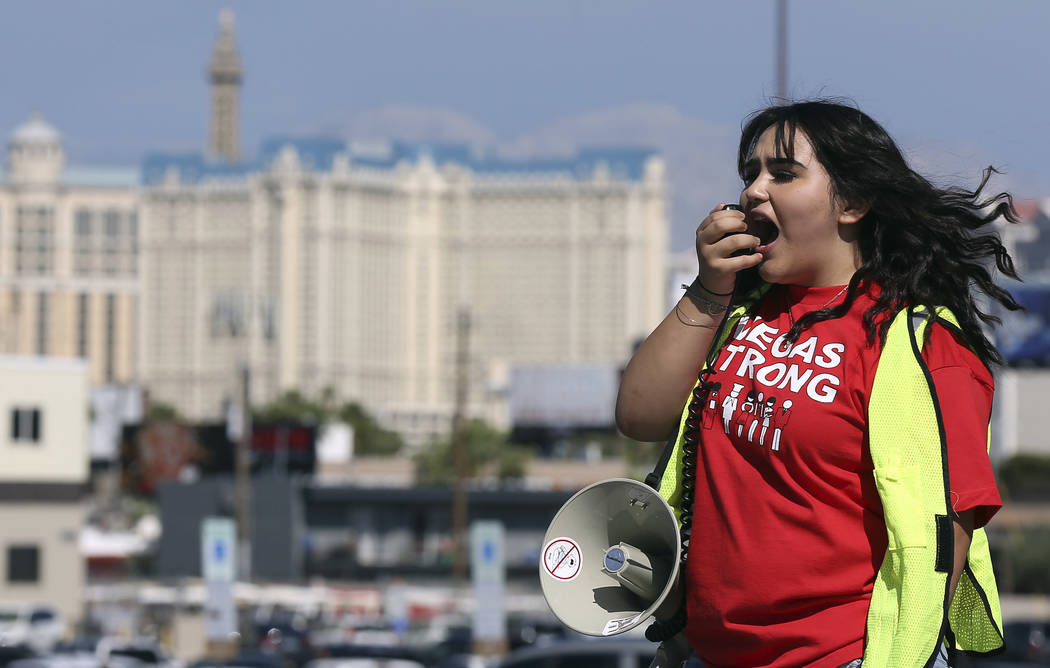 Volunteer Jenifer Murias yells into a megaphone as Culinary Union members file into a university arena to vote on whether to authorize a strike Tuesday, May 22, 2018, in Las Vegas. A potential strike would affect 34 casino-hotels. A majority yes vote would not immediately affect the casinos, but it would give union negotiators a huge bargaining chip by allowing them to call for a strike at any time starting June 1. (AP Photo/Isaac Brekken)

Unions representing Las Vegas casino workers won the right Tuesday to call a citywide strike as early as June 1 if they do not reach a deal with employers.

Roughly 25,000 members of the Culinary Local 226 and Bartenders Local 165 participated in two voting sessions, and 99 percent voted to go on strike if a new five-year contract isn’t reached, according to a Culinary union press release.

Contracts for 50,000 employees such as bartenders, housekeepers, bellhops and porters expire at the end of the month at 34 Strip and downtown resorts, including properties operated by MGM Resorts International, Caesars Entertainment Corp., Penn National, Golden Entertainment and Boyd Gaming Corp.

Tuesday’s “yes” vote was widely expected by the industry. The unions have held several strike votes over the decades with not a single “no” outcome, said Culinary union spokeswoman Bethany Khan.

Las Vegas casino strikes have been avoided in most cases following a “yes” vote by union members. The last citywide strike was in 1984. It affected 32 resorts and lasted 67 days.

Casinos still have at least a week to reach an agreement with unions before they potentially call a strike. Talks could even continue after June 1 without a strike being called.

Caesars spokesman Rich Broome reiterated Tuesday that the company expects to reach an agreement with the unions and avoid a strike.

James Kraft, a professor who authored a book on the 1984 strike, said he expects the two sides to reach an agreement, as both workers and casinos stand to lose from a walkout.

During the 1984 strike, Las Vegas casinos lost as much as $100 million in revenue (about $250 million today), while city and state budgets lost millions in tourist-related taxes, according to Kraft.

A union strike fund helped support workers during the period they picketed.

Lewis Thomas, a 59-year-old utility porter worker at the Tropicana, was among the thousands who voted Tuesday in favor of striking.

Thomas said he wants better health benefits and company-sponsored training so employees like him are not made redundant by technology.

“We are ready to walk if we don’t get the contract. Even if it means striking one month, two months or a year,” said Thomas.

Pamela Hughes, an MGM Resorts employee, also said she is concerned about technology replacing workers such as bartenders and cocktail waitresses.

Strip hotels have been rolling out innovations such as delivery robots, chatbots and self-check-in terminals that have the ability to replace some employees.

MGM, which recently talked of a future with drones delivering margaritas, said it is working with the unions to soften the impact of job disruption from technology by providing training and new opportunities.

“While new technology may change the way some jobs function, we will always rely on the skill and personal touch that can only come from our employees,” the company said in a statement to the Review-Journal.

Jose Licea, an on-call kitchen worker at Planet Hollywood Resort, arrived at the Thomas & Mack Center with a U.S. flag and a bullhorn, chanting “No contract, no peace.”

Licea, who has worked on the Strip for 25 years, said workers need a wage boost to cover rising prices.

“Everything is going up: gas, food, supplies. We need to raise salaries,” he said.

Hughes said casino operators like MGM are sharing too much of rising profits with stockholders and not enough with workers.

The two casino operators, however, hadn’t returned any money to shareholders in at least a decade before MGM reinstated its dividend last year.

MGM and Caesars had been paying down billions in debt and investing billions more to refurbish existing properties, including ones on the Strip. MGM has also invested several billion to build three new casinos.