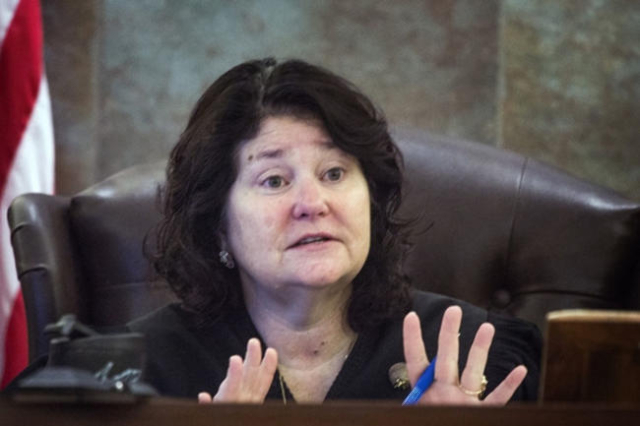 Lawyers for Las Vegas Sands further argue that Gonzalez has a “long history of one-sided, erroneous and erratic rulings” in the case filed in October 2010 by Jacobs, former president and CEO of Sands China Ltd. Jacobs was the head of operations in China for about nine months before he was fired in July 2010.

Barker has indicated he will decide on the request by Feb. 17, and Gonzalez has indicated she will not hear any issues in the case until he does so.

“It’s another sandbag to try and stall the trial of this case,” he said Thursday. “The defendants are afraid of the evidence that will come out at trial and should just admit that fact to everyone.”

Gonzalez in a declaration last month denied having “a bias toward or prejudice against” Las Vegas Sands. Las Vegas Sands maintains it should have been given a chance to respond to Gonzalez’s declaration before denial of the company’s request to disqualify her.

In his January ruling Barker concluded that Las Vegas Sands had presented no evidence that Gonzalez “has actual bias or implied bias either in favor of or against any party to this action.” The Nevada Supreme Court also has denied other requests to remove Gonzalez from the case.

Other defendants in the case include Sands China Ltd. and Sheldon Adelson, the chairman and CEO of Las Vegas Sands.

Jacobs claims he was terminated “for blowing the whistle on improprieties and placing the interests of shareholders above those of Adelson.” A trial is set to begin June 27.

In a Jan. 13 motion, Las Vegas Sands lawyers included 14 news articles that appeared the previous month in local, national and international publications. They argue that recent comments by Gonzalez to the press would lead a “reasonable person” to believe that she “has a direct, certain, and immediate interest in media coverage of this lawsuit.”

During his deposition the previous day, Dumont had refused to answer any questions about contact with Michael Schroeder, a Connecticut newspaper owner associated with the Adelson family’s Dec. 10 purchase of the Las Vegas Review-Journal. Dumont was instrumental in the purchase.

One of Schroeder’s Connecticut newspapers on Nov. 30 published a plagiarized, partially fabricated article that was critical of Gonzalez. The article was published about the same time that three Review-Journal reporters were ordered by GateHouse Media, the newspaper’s former owner, to monitor Gonzalez and two other judges.

Gonzalez ruled that Dumont’s lawyer had acted inappropriately under Nevada law when he directed his client not to say whether he had discussed Jacobs or the wrongful termination case with Schroeder. Dumont’s deposition continued after the Jan. 12 hearing, but his answers to questions that day remain sealed.

Lawyers for Las Vegas Sands cited Gonzalez’s ruling in regard to Dumont’s deposition in their new motion.

“Rather than concede her personal interest and conflict in wanting the answers to Jacobs’s counsel’s questions about the newspaper for personal reasons wholly unrelated to this out-of-control, wrongful-termination suit, the District Court promptly confirmed her personal interest in knowing Dumont’s role in publicity involving her handling of the case and her interest in favorable media coverage,” the lawyers wrote.

Gonzalez said in her declaration that she responded to two media requests for comment about the RJ’s courtroom monitoring — one from the Review-Journal itself, the other from Time magazine. She said both publications correctly reflect that she “did not discuss a particular litigant or case.”

Dumont’s lawyer, Hersh Kozlov, could not be reached for comment.