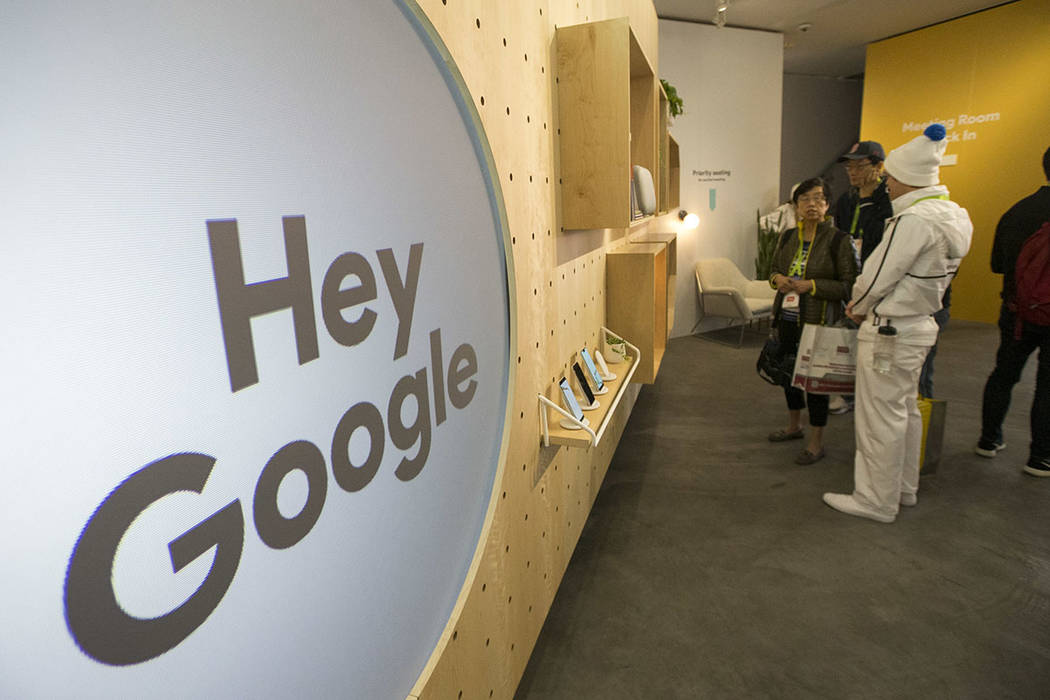 Attendees browse Google products on display at the Google booth on day one of CES at the Las Vegas Convention Center in Las Vegas on Tuesday, Jan. 8, 2019. (Las Vegas Review-Journal file) 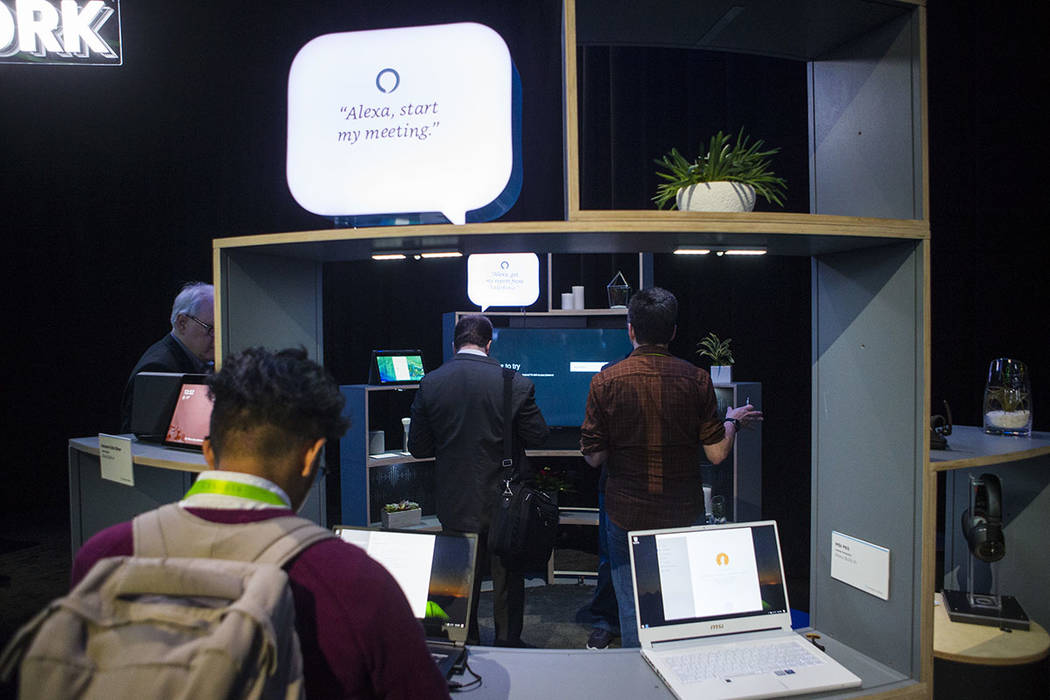 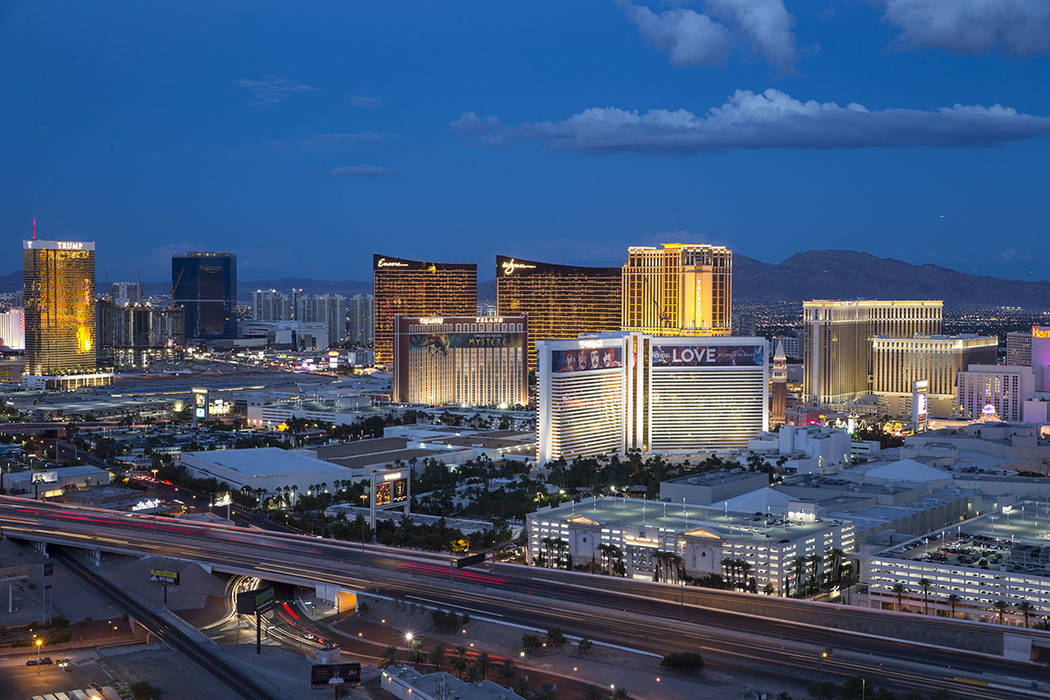 The Strip lights up at dusk as seen from the VooDoo Lounge atop the Rio hotel-casino in Las Vegas on Wednesday, Oct. 3, 2018. (Las Vegas Review-Journal file)

Alexa, where are you?

Las Vegas was the global capital of smart home and hospitality technology when CES took over the Strip in early January.

Amazon and Google occupied large swaths of exhibition space at the gadget show to promote their voice-activated speakers Alexa and Google Home Hub.

Yet for all the hype, the revolution is unfolding at a cautious pace on the Strip as well as in other major U.S. hospitality markets.

In the two years since Wynn Resorts began installing Amazon’s virtual reality assistant at its Las Vegas properties, becoming the hospitality industry’s pioneer, no other Strip resort has followed suit.

Even at Wynn, spokesman Michael Weaver said Alexa has been installed in only about 70 percent of its rooms as of the middle of January, slower than initially planned. He did not give a reason for the delay.

Representatives of Caesars Entertainment Corp., The Cosmopolitan of Las Vegas and Treasure Island, too, said they do not have concrete plans to install voice-activated assistants in rooms in the near future. A representative for Las Vegas Sands Corp. declined to comment.

Industry experts say a lack of guest demand and privacy concerns may be slowing the rollout of third-party voice-activated devices in hotel rooms.

Hotels are focusing their consumer-facing technology investments on adding streaming capabilities, like Netflix, and enhancing their mobile apps, a December report by Hospitality Technology showed. Voice-enabled technology is 10th on that priority list.

Voice-activated speakers may not be as high on the list because many guests do not have them at home. According to a 2018 study by the Consumer Technology Association, less than a quarter of U.S. households have a voice-activated speaker, while 87 percent and 96 percent, respectively, have smartphones and TVs.

Roughly three out of every four households have a Netflix account, according to a report published last month by PwC.

Chad Beynon, a hospitality analyst at Macquarie in New York, said Strip hotels can derive a greater return on investment from allowing people to skip the front desk and use their phone as a digital room key.

“The biggest benefits in room technology are in digital key and in connecting the room to a mobile device,” he said.

That seems to be the case for MGM Resorts. Smith said the casino operator keeps “coming back to the one common denominator amongst our guests. And that is the phone in their pocket.”

MGM Resorts unveiled an updated mobile app this month that allows guests to check in or check out and that turns their phone into a digital key at select properties.

Guests can also use the app to order room service and book restaurants and shows at MGM Resorts properties.

The company said it will add more features and later this year will launch a human-powered chat to answer guest questions.

Caesars and The Cosmopolitan are focusing on expanding the capabilities of their chatbots, which are virtual concierges that guests interact with via text anywhere on the property. Both operators released their chatbots two years ago.

Last year, The Cosmopolitan added tablets to its rooms that control lighting and temperature, while Caesars is adding mapping and mobile food ordering, among other features, to its mobile app.

“The app is the lowest-hanging fruit, but it is not a binary choice between that and voice-activated technology like Alexa. You have to pursue both,” said Mehmet Erdem, a hospitality professor at UNLV.

Michael McCall, a hospitality professor at Michigan State University who closely follows Las Vegas, said the largest Strip operators, like MGM Resorts and Caesars, may dip their toes into the voice-activated world by testing a few rooms.

“It would not surprise me if Aria, Bellagio or Caesars Palace dedicate a small block of rooms to see if this would be of use,” he said.

Smith said MGM Resorts may make voice-activated investments down the road, when “voice interactions will get to a point where it can be a primary alternative to a mobile app for most situations.”

Coming to the Strip?

Hilton Hotels, the world’s second-largest global lodging operator, may offer insight into what controls and features Strip operators will soon offer to guests via their mobile phones.

In addition to ordering amenities and unlocking their doors, Hilton guests can control room temperature, lighting and TV with the app at 1,800 so-called Connected Rooms around the country.

The hotel operator plans to connect tens of thousands more rooms to this app in the coming years, including in Las Vegas, said spokeswoman Binoli Dua.

Last month, Hilton pushed its app to the next level when it announced it would add a feature that allows guests to cast Netflix shows from their phone to the room TV.

Marriott International, the world’s largest hotel operator, may be the next Strip operator to launch Alexa when it opens two properties inside The Drew in 2020.

In June,the company announced it was partnering with Amazon to roll out Alexa at select properties in its portfolio of high-end brands. Marriott spokesman Brendan McManus declined to comment.

He will have installed Alexa-connected entertainment systems at six properties belonging to the Marriott Autograph Collection by May.

“As soon as you saw that Mrriott was piloting Alexa and making a partnership with Amazon, you know that other brands started to keep a close watch,” he said.

Concern over privacy and security have also been a challenge for a quick rollout.

Voice-activated devices can be “a bit creepy, a bit big brother-ish,” said Reneta McCarthy, a hospitality professor at Cornell University. “There is the question of who owns the data: Amazon, you or the hotel?”

Karen Xie, a hospitality professor at the University of Denver, said last year’s breach at Marriott International, in which its Starwood guest reservation database exposed the personal information of up to 500 million people, may have shaken confidence in hotel data security and added to concerns over smart technology in rooms.

“People want to be sure that their privacy and dialogue is in good hands,” she said.

“Guest interactions with Alexa in a hotel room are not linkable to an individual guest and voice recordings are deleted daily,” Amazon said in a statement to the Review-Journal.

The Seattle-based technology giant said its Alexa for Hospitality program launched just last year and is still by invite only, explaining why there are not more operators deploying it.

Still, hotels will be slow to place voice-activated devices in rooms until they understand all the legal and security nuances, including protecting guest data, Patrick said.

“That really stops the proliferation of those devices into the rooms,” said Patrick, who is confident the fears will ease and demand will surge.